The trip was organised by World Expedition. They arranged a bus transfer from Nairobi in Kenya to a hotel in Marangu at the foothill of Kilimanjaro in Tanzania. So my first stop in Africa was Nairobi.

Prior to the trip, World Expedition wanted to know whether I was healthy wealthy and wise. The wealthy part was easy - I just had to pay up fully for the trip. The healthy and wise bits needed a doctor's signature. So off I went to see my local doctor who happened to be a young chap. When told he needed to certify that I was of sound mind and sound health, he sent me packing to consult a specialist, at the same time muttering that an old man like me who wanted to climb Kilimanjaro should have his head examined.

Geez, just because I am older than him, doesn't mean he can call me old ... I hate young doctors!!!

Anyway, I panicked. A specialist might find some skeletons in the closet, like iron deficiency or some technicalities that would ground me from climbing high mountains. And besides, it would take ages to book a specialist ... our Aussie health system was a bit of a mess. So I went to see a female doctor in the next suburb instead, and also took along my Kinabalu climbing certificate.

The Kinabalu certificate did wonders. It was a beautifully print piece of paper full of Sabah's colourful fauna and flora. The doctor saw it and she loved it. And I helped along by exaggerating that Kinabalu was high. "Very Very High", I emphasized, even though it is a mere mole hill compared to Kilimanjaro. Without asking too many questions, she signed that I was of sound mind and sound health.

Back to Nairobi ... it was a depressing place. Groups of seemingly unemployed men standing around streets doing nothing. I dared not step outside the hotel ... isn't Nairobi's nickname Nai-Robbery or Night Robbers or something similar!?!. Glad I was out of the place and on a shuttle bus to Marangu the next day.

Usually I don't sleep well out of my own bed at home, so I chose the shortest possible route for this climb ... to get it done as quickly as possible, knowing that I may manage only 2 or 3 hours of sleep per night.

Well, the shortest route was the Marangu Route - 5 days. I gave this the flick because I was warned it was a horror track, too dusty.

The next shortest route was the Rongai Route - 6 days. It tackled Kilimanjaro from the North side. So I picked this one. But if I were to do Kilimanjaro again, I would choose one the routes which approaches the mountain from the western side ... because you would get a marvellous view of the large white ice field on the western flank. Whereas the other sides are quite barren and brown. It is a pity, as photographs of Kilimanjaro from 30 years ago showed a beautiful white ice cap around the entire mountain top. Global warming has since melted away much of the ice.

At the hotel in Marangu, I met the other 10 climbers in our group. They were a friendly bunch of people. And throughout the climb we encouraged and supported each other, which helped explained why all 11 of us made it to the summit. Although one young female of our group called Pippa attributed her success to Milo ... because she always scooped in 10 spoonfuls of that stuff into her cup whenever she had a drink ... sort of like Popeye gulping down Spinach to get his strength ... haha!!!

As for me, it was a piece of cake - very easy to hike to the top. From various blogs on the internet, it sounds as if one needs to be a super-fit human being. Could it be because all the authors liked to jazz up the difficulties to make their stories interesting?

One reason why I find the climb easy was because the guides walked very slowly. So slow that if it was any slower, we would be walking backwards. This slow walk was called "po-le po-le" in Swahili. And throughout the climb, the guides kept reminding us to "po-le po-le". Actually, because of the low oxygen level, it was quite impossible to walk fast without getting into heavy panting.

On the way down, I saw a group of one-legged amputees on crutches on their way up. The guides said this was quite common. They also said they had taken groups of blind men to the top. So I think any reasonably fit person should be able to climb Kilimajaro.

For someone like me who was new to mountains, the scenery on the Rongai Route was fantastic, both on the trail and on the summit. Every one should make a pilgrim to this mountain once in his/her life time !!!

The 5th day was the summit day. On that day, we waked up at midnight, had a small meal, then started the climb at 12:30am. We were in luck, it was clear sky, hardly any wind, no wind-chill factor to worry about. When we reached the top at 5895 meters, the temperature was a mild -5 degree at 9:30am.

Some photos: (To enlarge a photo, click on it.)

1: This photo was taken at Namanga, a town right on the border between Kenya and Tanzania. After the immigration check on our luggage, the bags were loaded back on the bus. Note that all baggages were put on top of the bus. The red bag in this photo is mine. 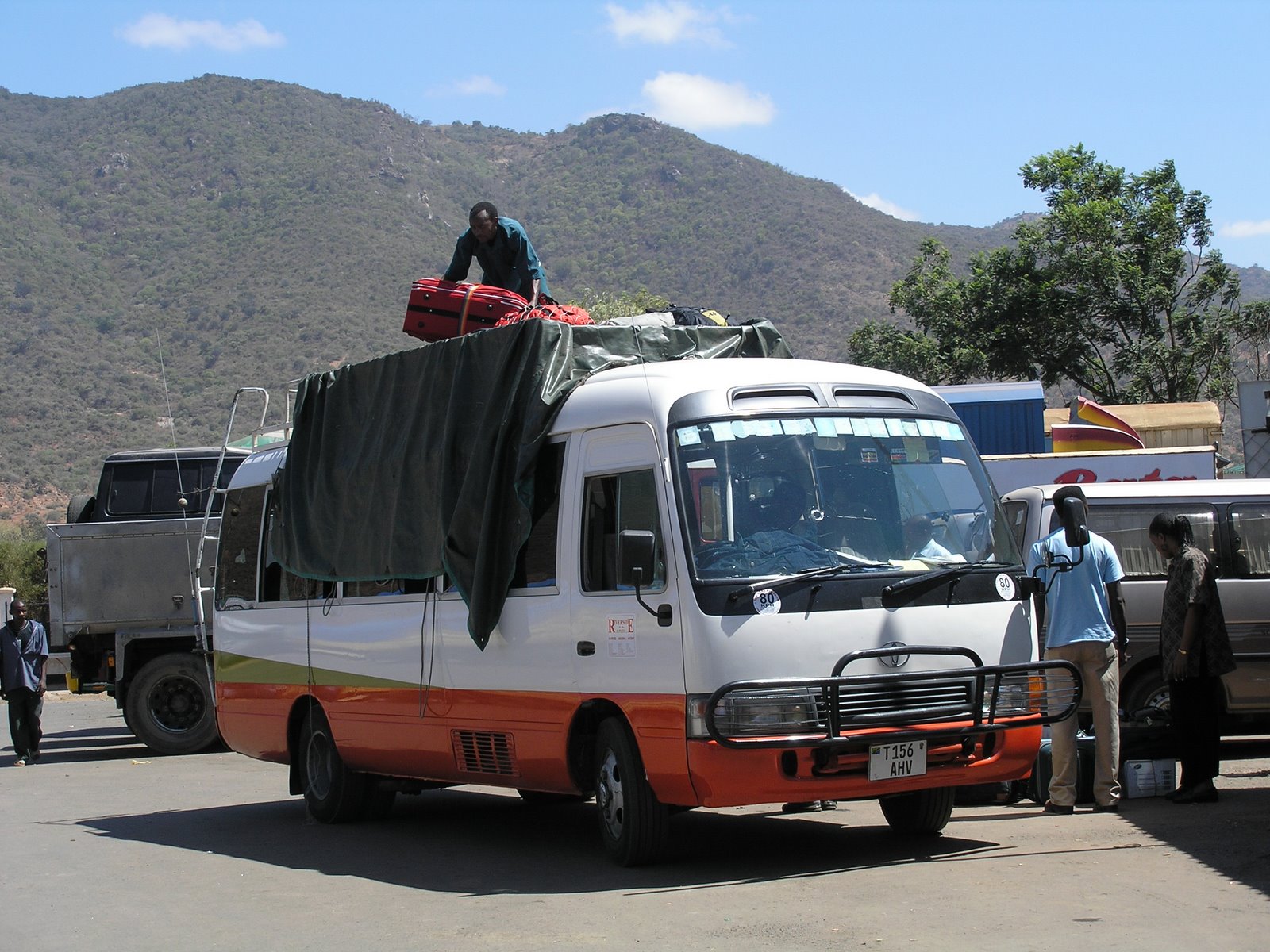 2: Our mass tent where we had our dinner and breakfast. Note the Milo can on the middle of the table which Pippa liked so much. 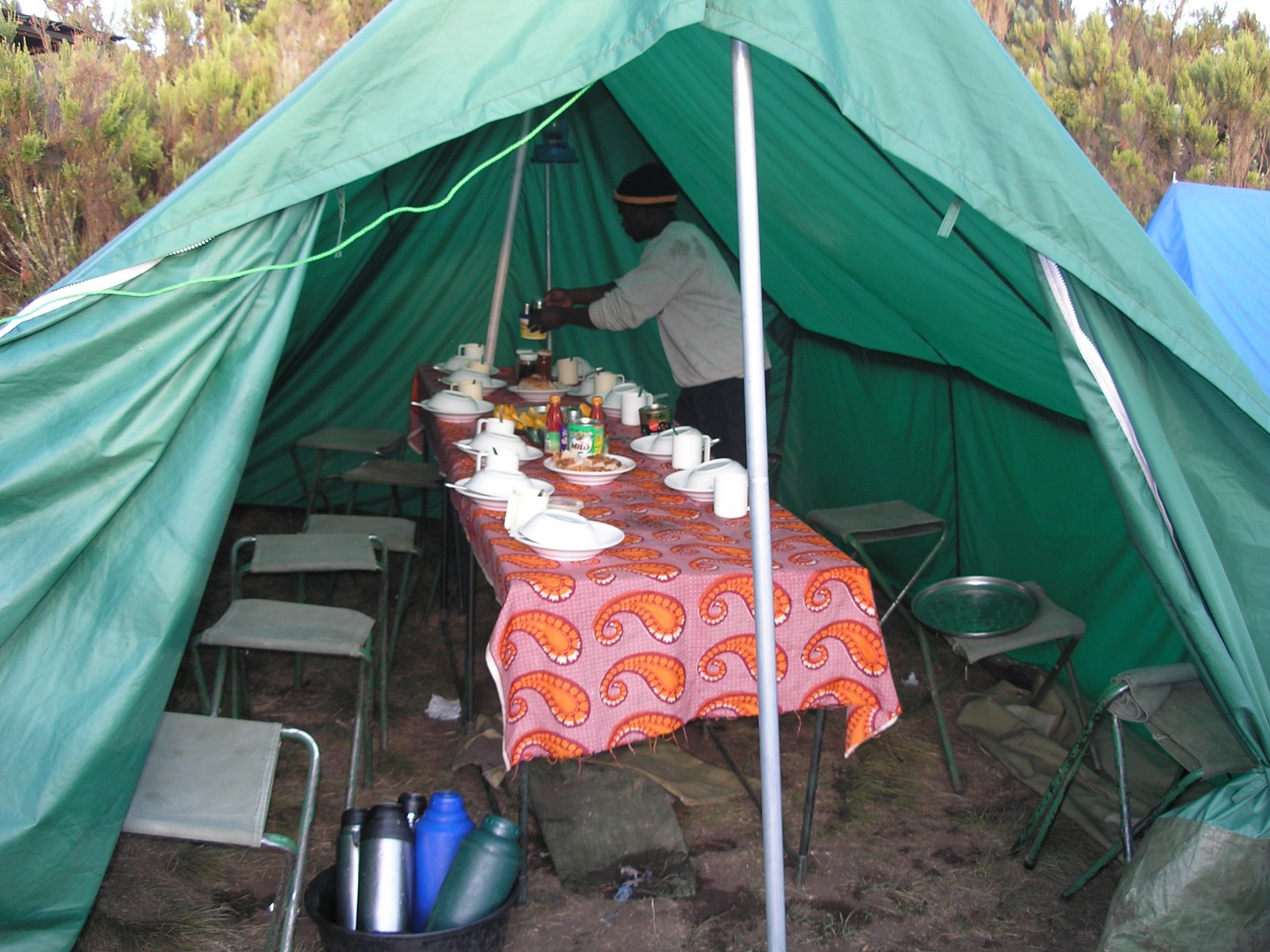 3: Me on the Rongai Route with Kilimanjaro in the background. Kilimanjaro is a volcano. The top is a crater created by a volcanic explosion eons ago. Hence the summit is not a typical cone shape. It is simply the highest point on the crater rim (on the left side of this photo). 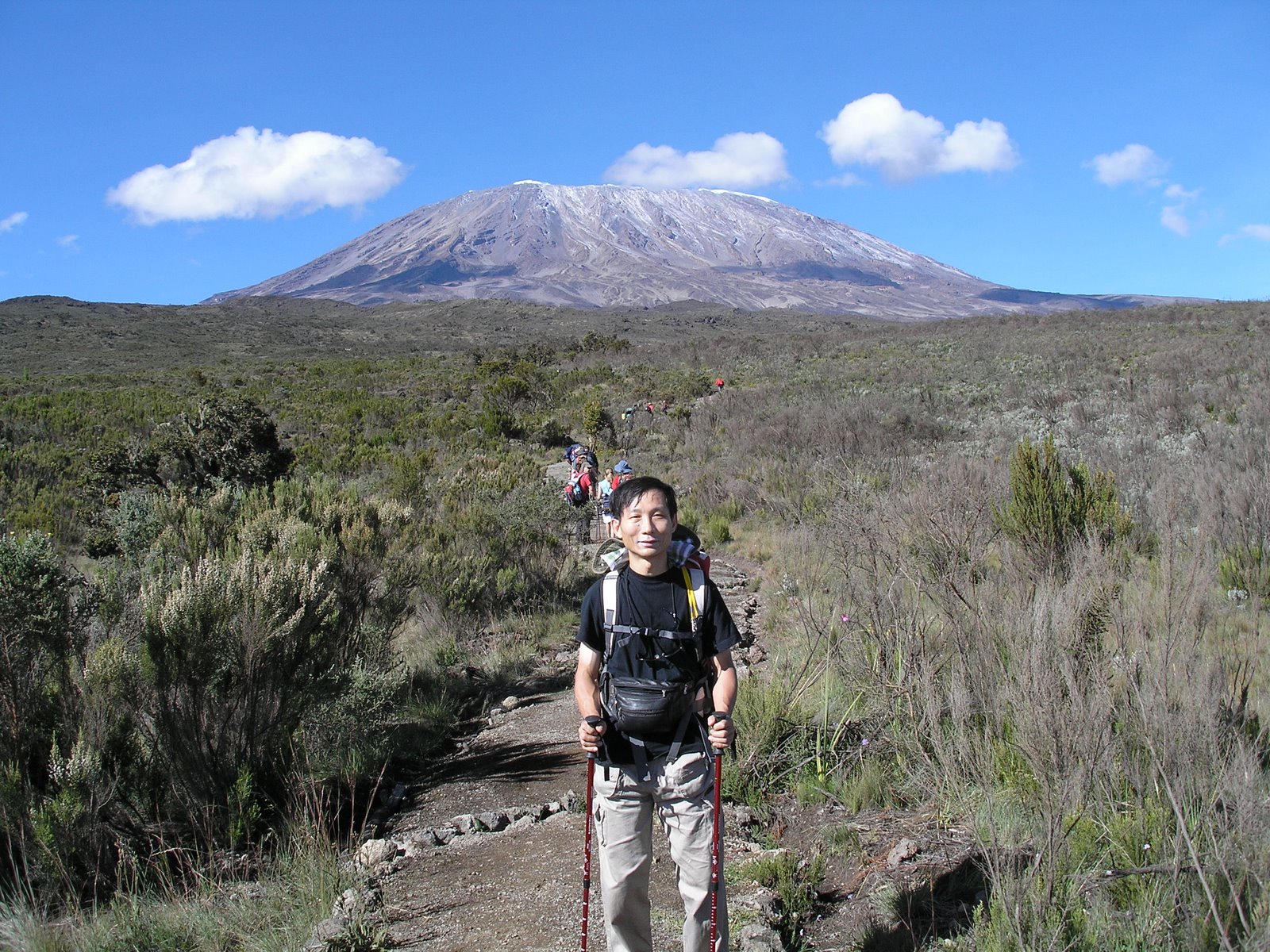 4: The porters ... they were amazing ... flimsily dressed and not afraid of the cold. In the morning after we started our hike, they packed up our tents, carried all our stuff on their head, overtook us, and by the time we reached the next camp site, they already had the tents properly set up. (For the record, there were 31 porters + 4 guides + 1 cook + 11 of us climbers.) 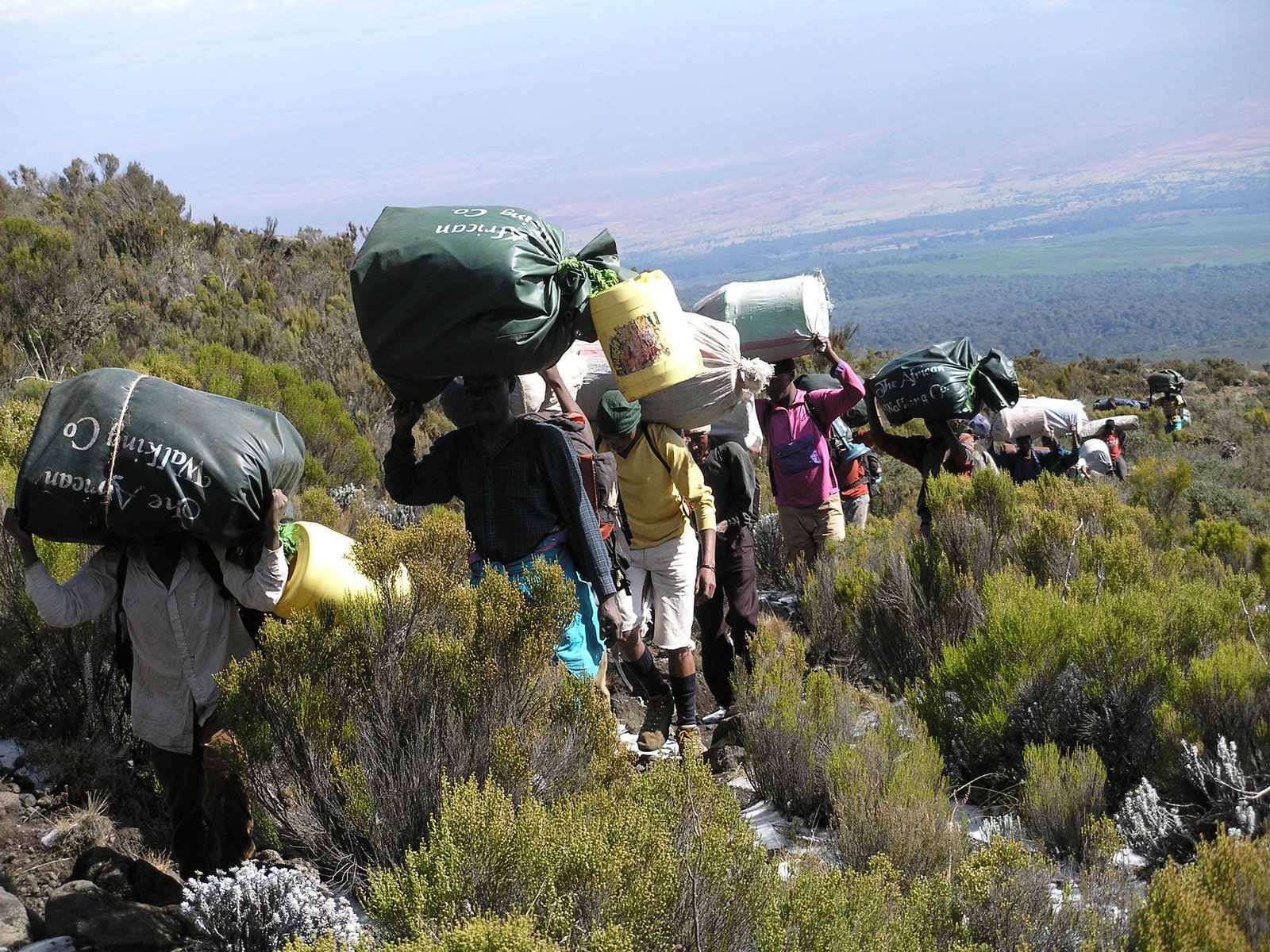 5, 6: This was the camp site on day 3 at Mawenzi Tarn. The white stuff was snow from previous day's storm. 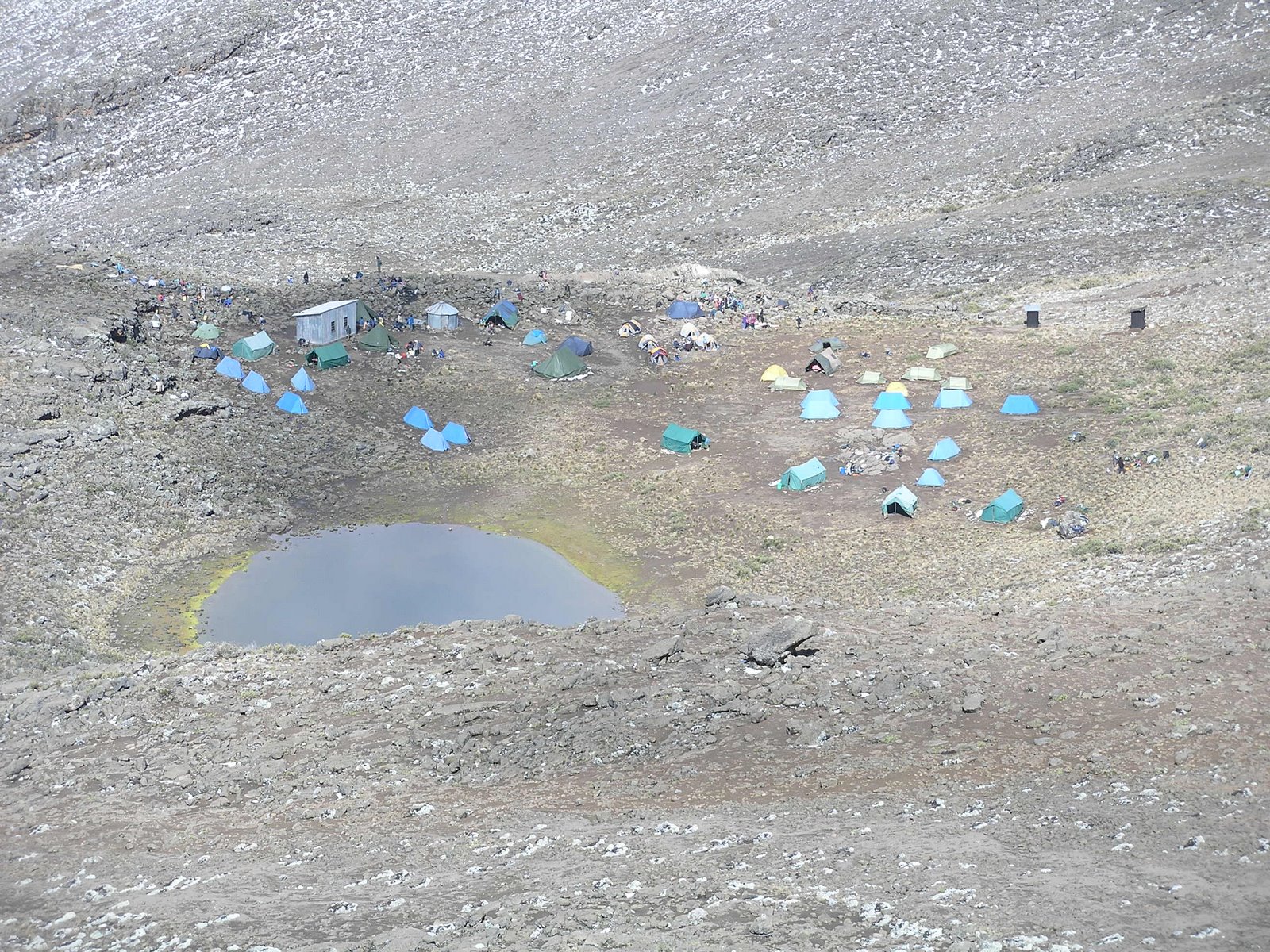 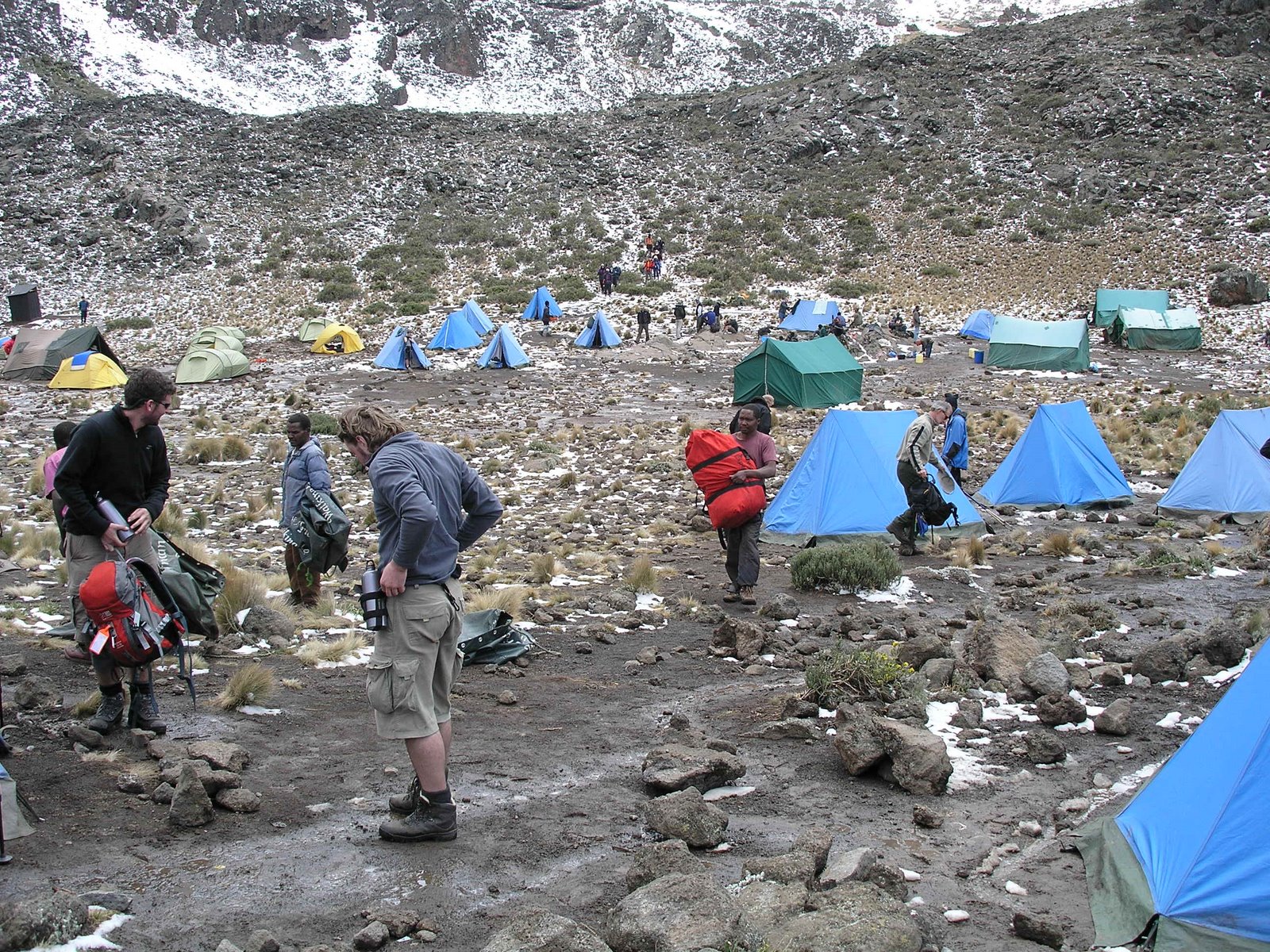 7: This was our group at the saddle point between Mawenzi Peak and Kilimanjaro. The leading guy was the chief guide. The scenery was desert-like because we were at 4500 meters. At this altitude, nothing grows - too cold. 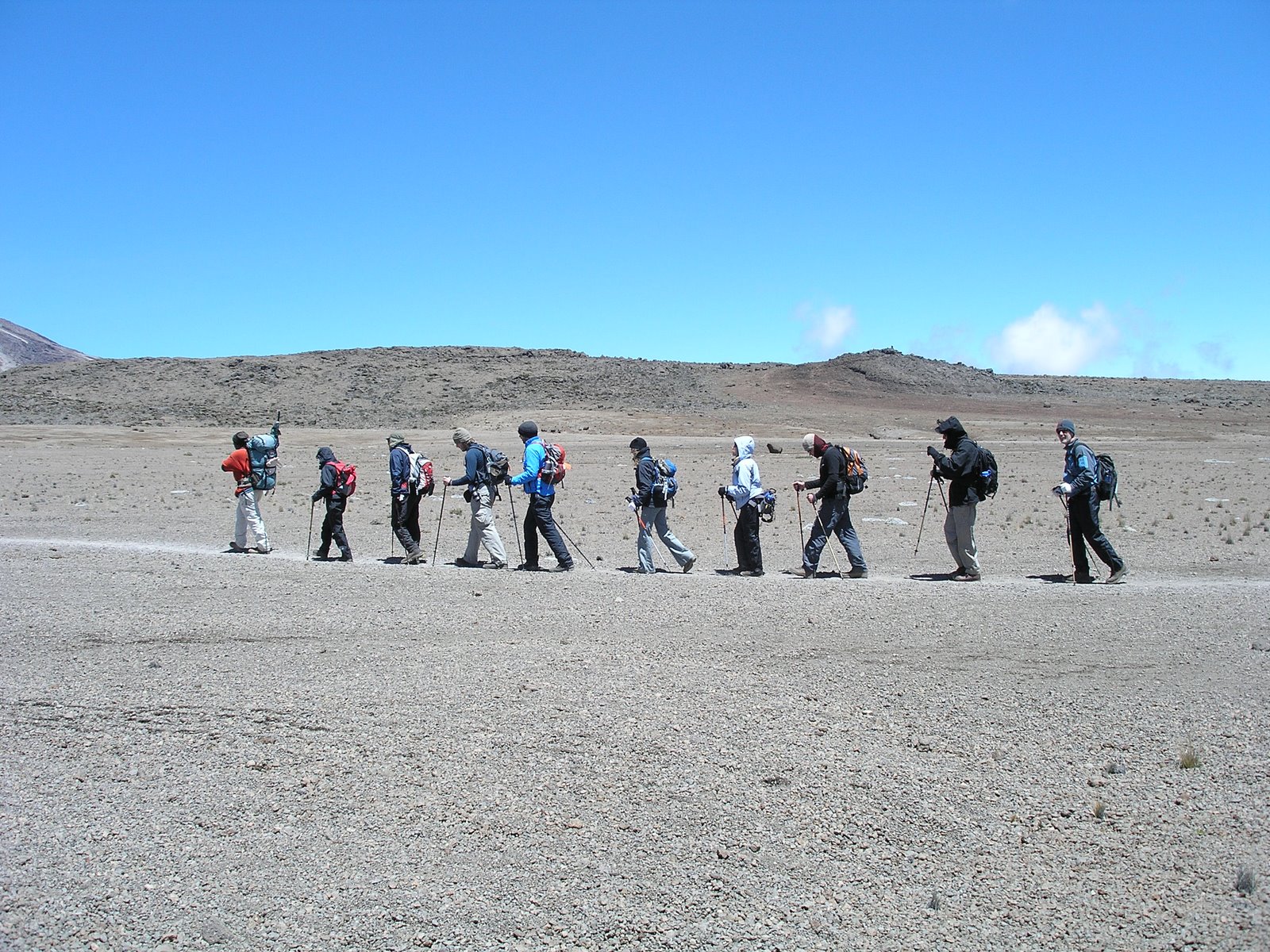 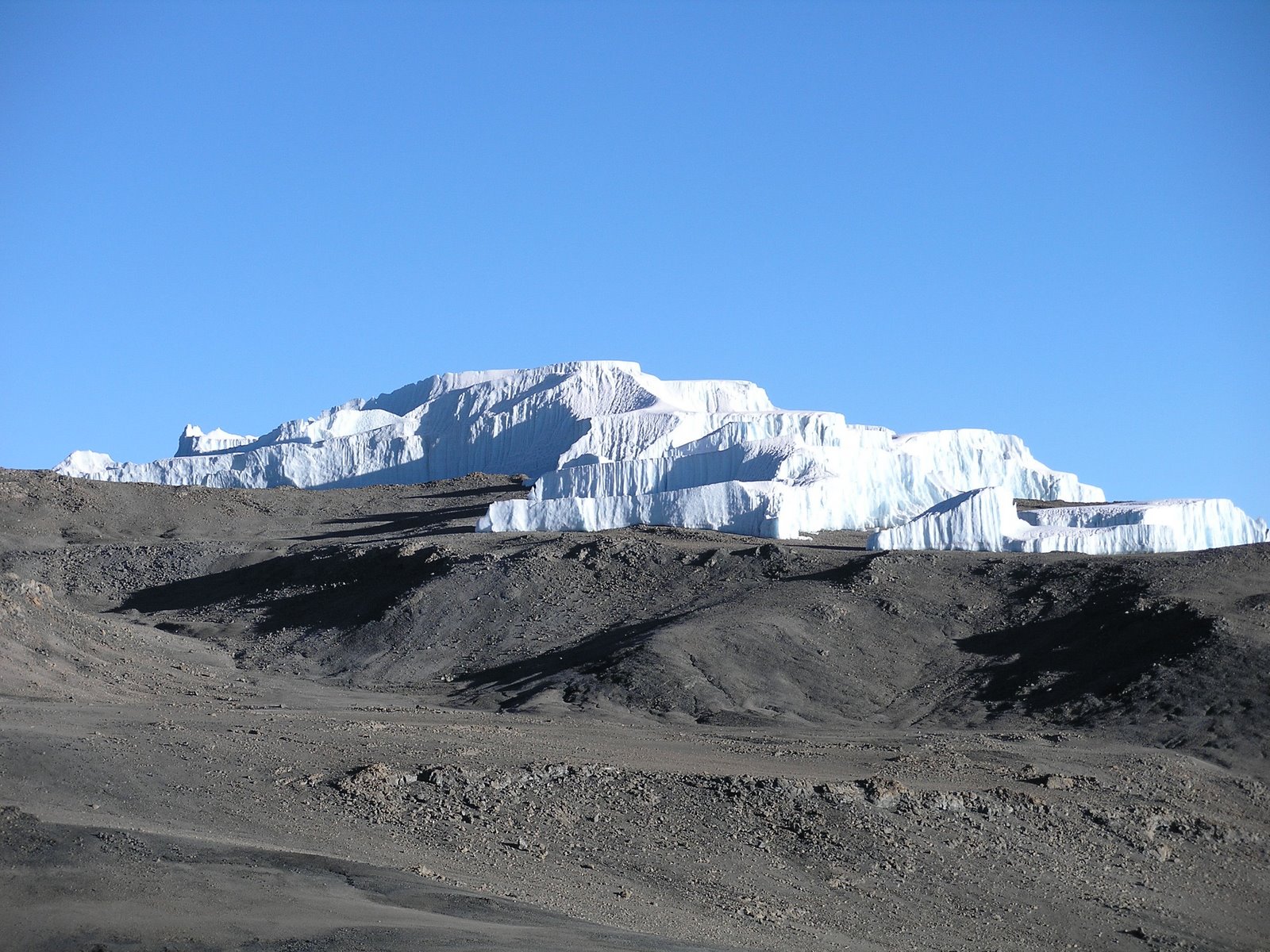 10: Kibo Crater: This is the name given to the crater at the top of Kilimanjaro. In the photo, you can see a part of the crater rim and the crater floor. This crater is huge. I suspect to circumnavigate it on the crater rim will take about 12 hours. 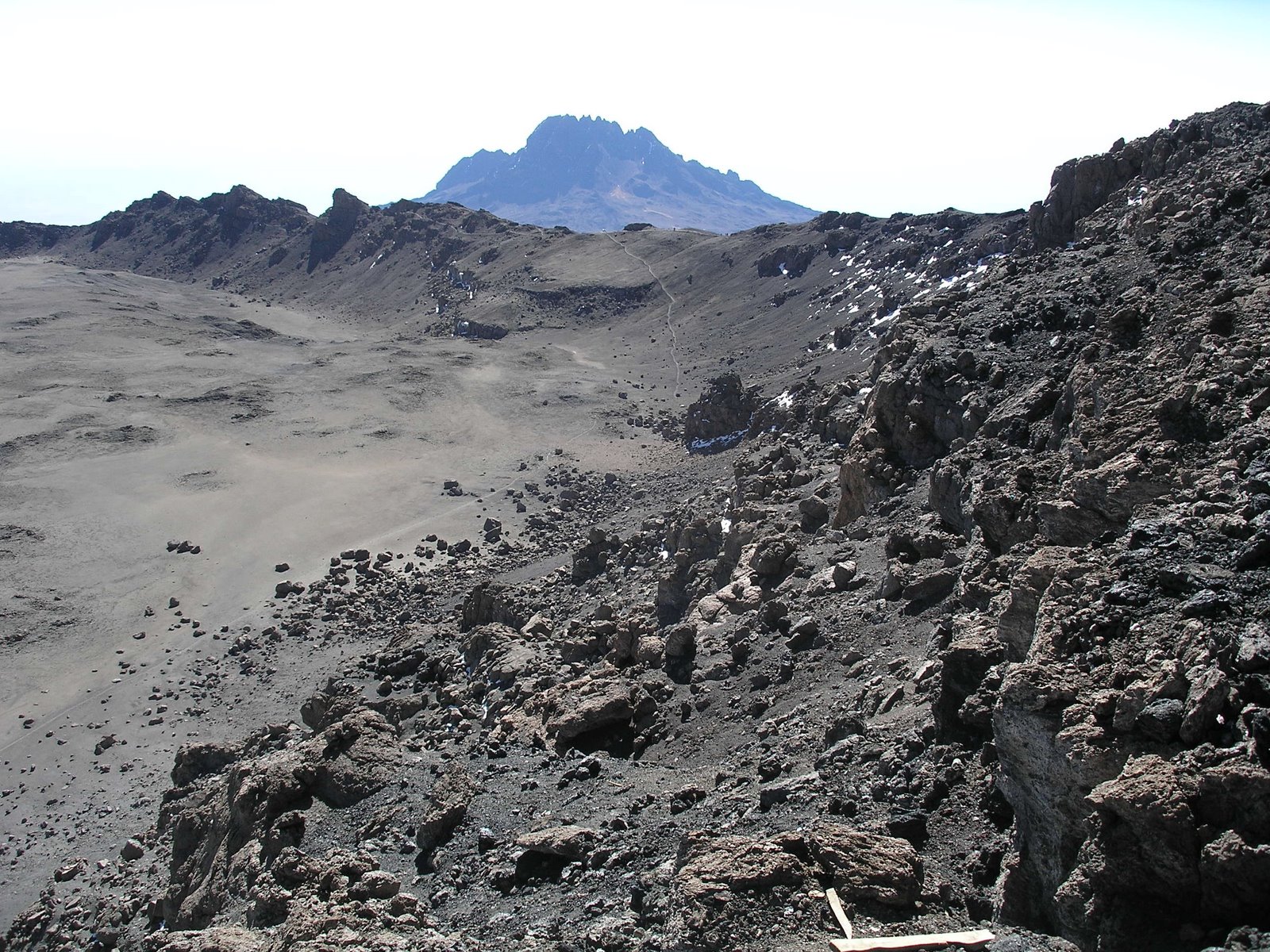 11: We were walking on the crater rim and we were almost there. The hill in the distance is the highest point of Kilimanjaro, called Uhuru Peak. 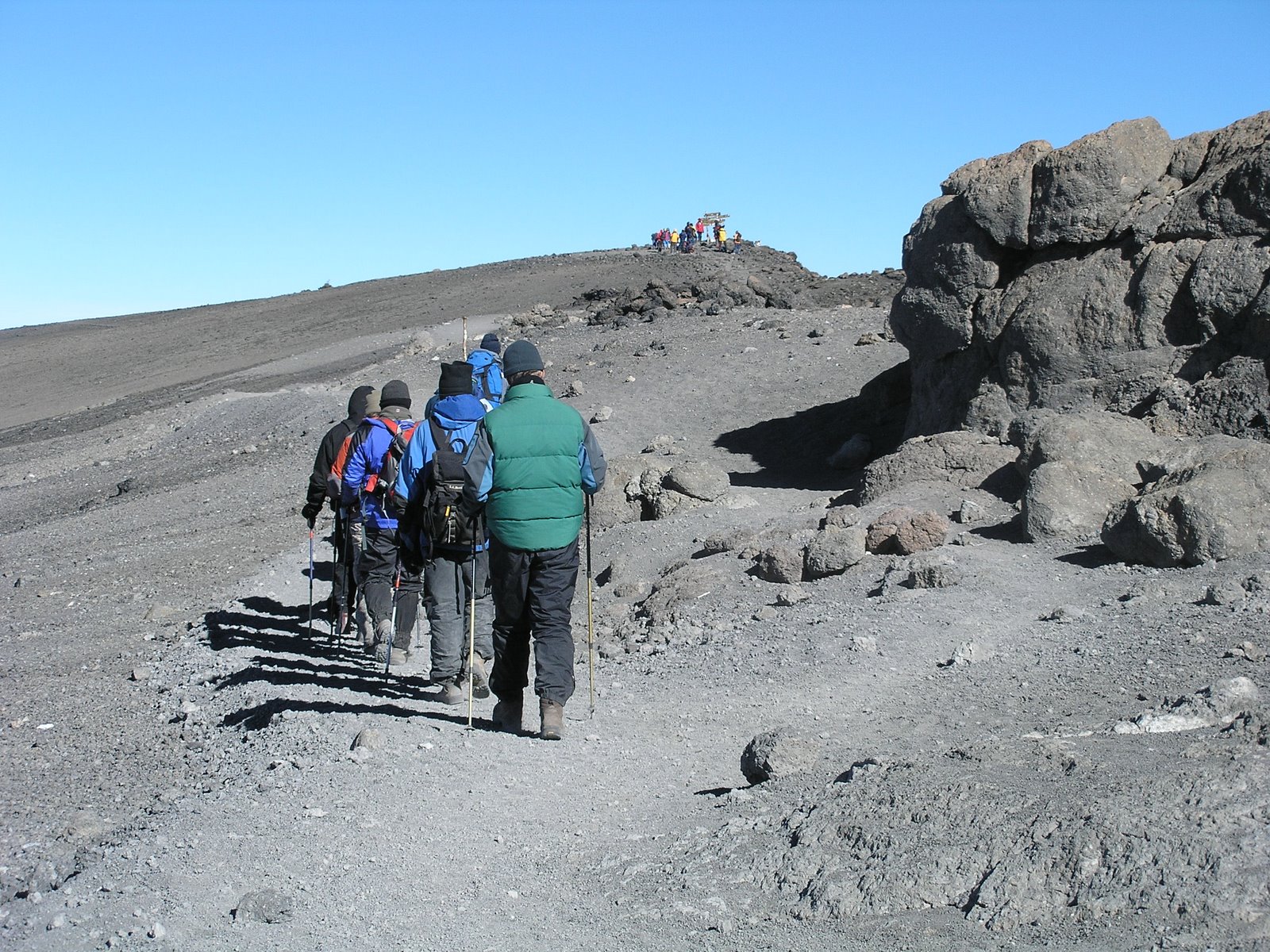 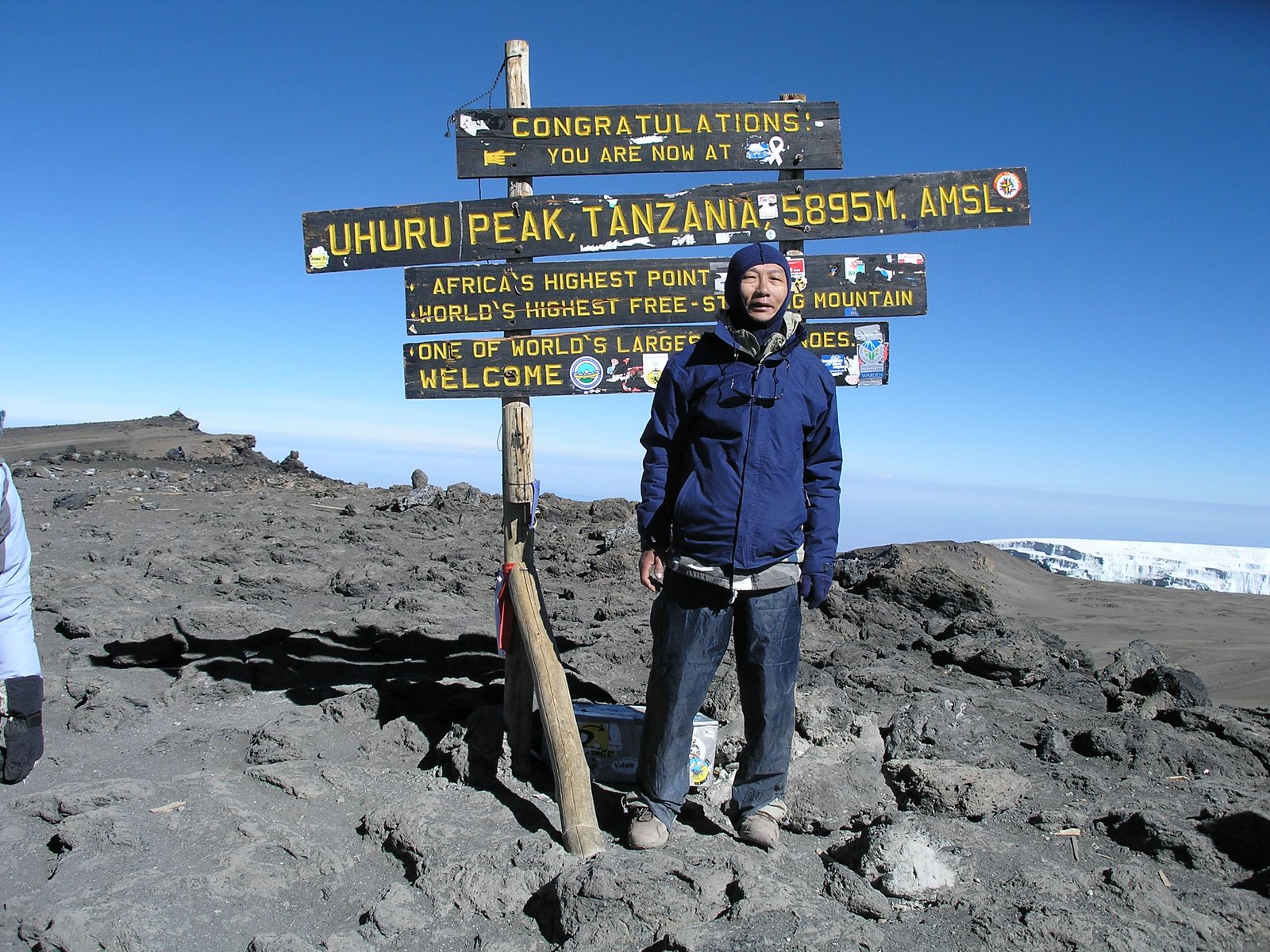 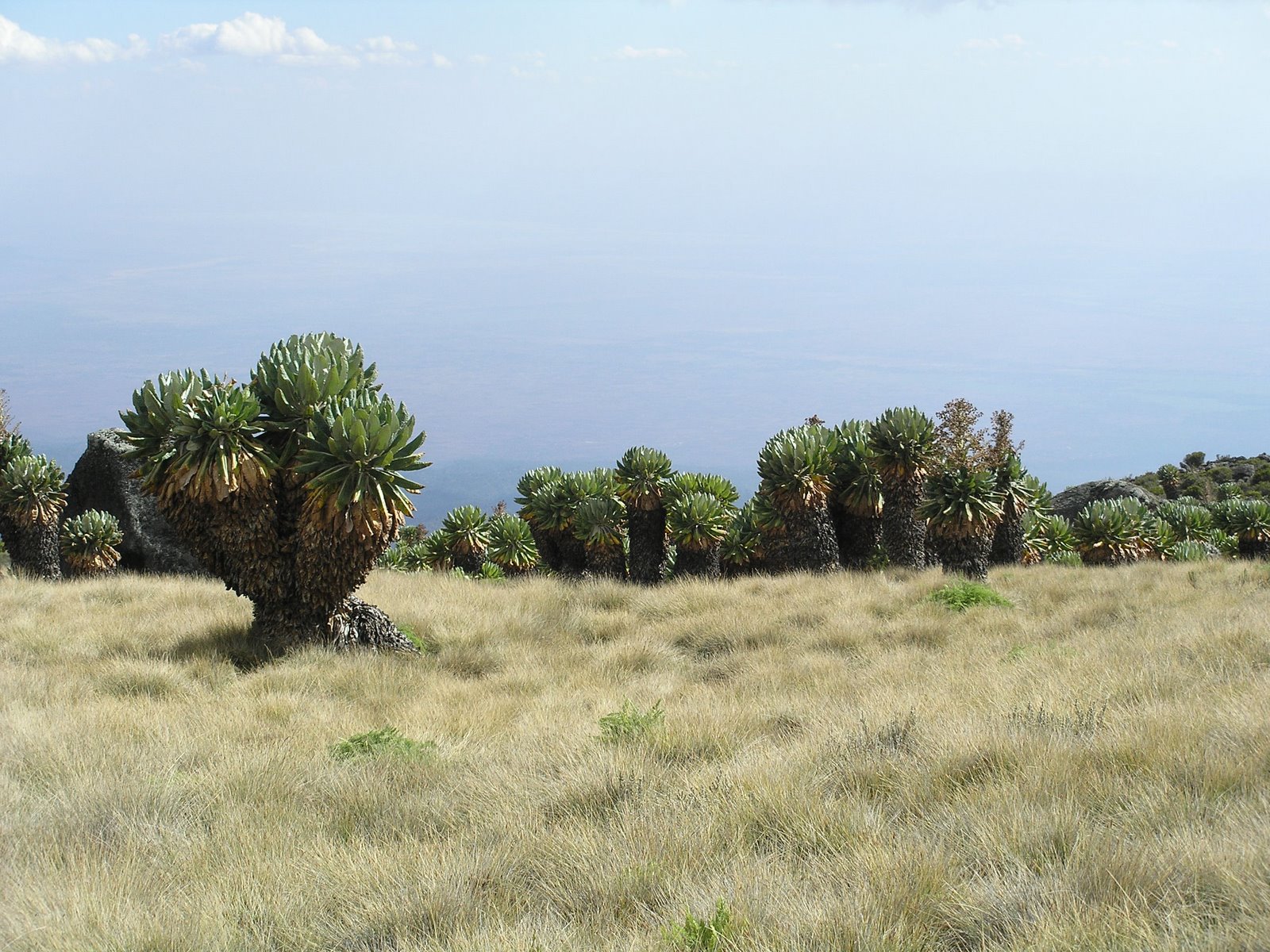 14: A view of Kilimanjaro from Horombo Huts. 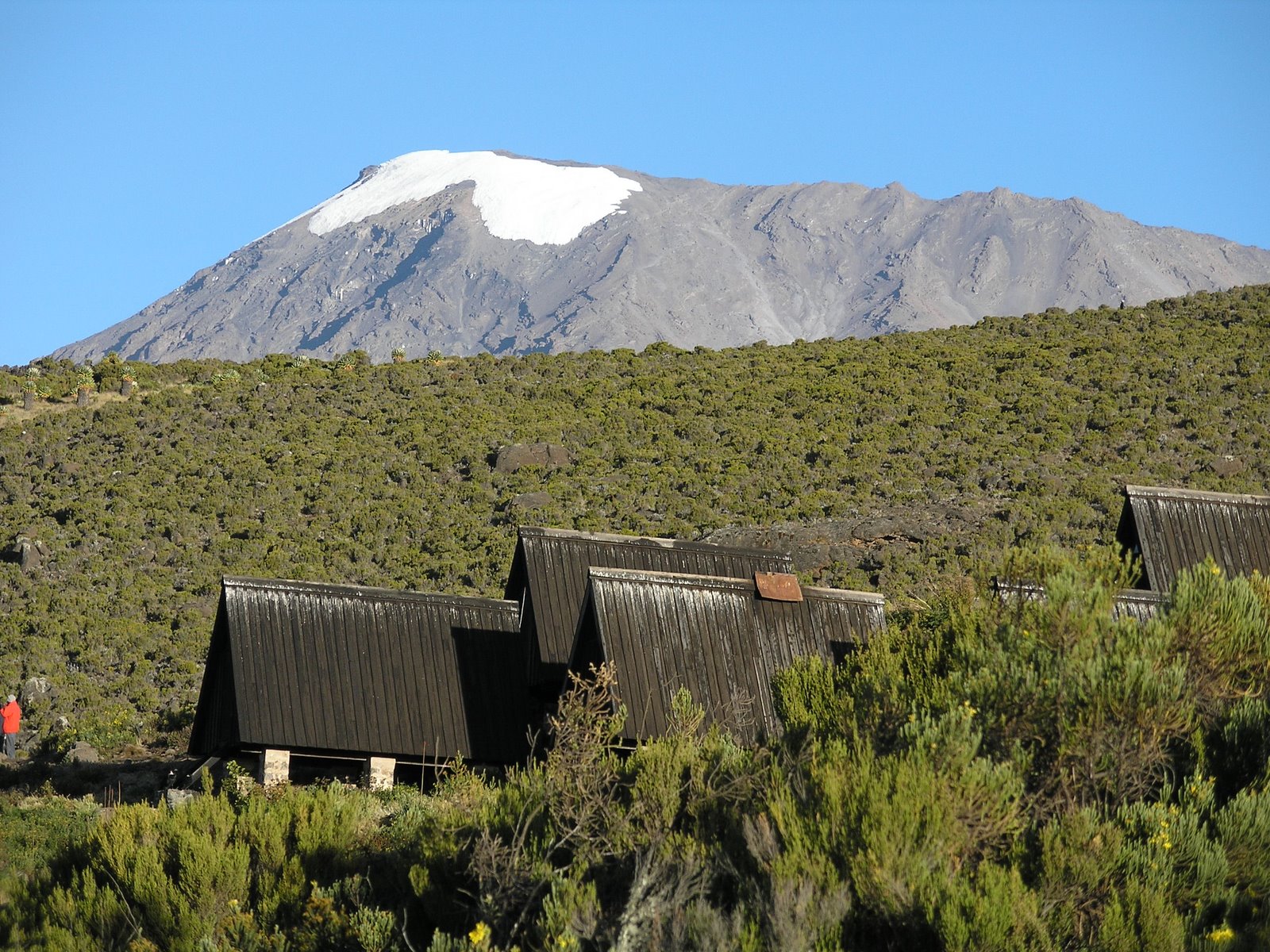 15: Morning of the final day: The porters and guides were singing and chanting to farewell us. The word "Kilimanjaro" kept coming out of their mouth. But all I could hear was Aconcagua, Aconcagua ... my mind was already drifting to the next big climb.