An alternate shorter 1-day route is from the west - start at Currango Plain (north-eastern tip of Tantangara Reservoir).
I did it twice. Photos and trip reports are in:

This trip with Ricky is part of our effort to climb the highest peak in every State/Territory in Australia ... called the State-8 peaks. Scroll forward to the Appendix section to see a list and links of my climbing trips to these peaks.

From Cotter Flats to Bimberi Peak and back is a long trip. On a hot day, you should carry 3 litres of water.

You need one, but it is free. Get it from Namadgi National Park Visitor Centre at Tharwa, ACT.


To get to the abandoned Orroral Tracking Station

Any decent map of ACT would show you how to get there. From Civic (Canberra city centre) to there is about an hour's drive.

Ricky and I park the car and start walking at 5:50am. Nice and cool then. We first walk on Cotter Hut road. Unfortunately cars are not allowed on it, as otherwise one could have driven all the way to Cotter Flats and saves at least 4 hours of walking.

About 4.5 km (1 hour) on Cotter Hut Road, we turn west into a small foot track which leads to Cotter Flats. The only way you will notice this foot track is a small post with a yellow triangle sign with the words "Australian Alps Walking Track" (AAWT) in small print ... scroll down to see the 1st photo. You must keep an eye out for it, because one blink and you'll miss it. If you miss it, you can continue on Cotter Hut Road. It will also lead to Cotter Flats, but it will be 4 km longer.

This area is truly remote. We do not see a single soul for the 2 days. And as such, many stretches of the AAWT is overgrown with vegetation. At times, it is very hard to pick the trail.

At 9:40am we arrive at Cotter Flats and cross the Cotter River. There is a nice camping spot, a flat grassy area just by the river. We dump our camping gears there and explore around. Nearby is a ranger's hut called Cotter Hut. It has a well manicured lawn ... but don't even think about it ... you are not allowed to camp anywhere near the hut.

At 10:30am, it is time to get going again. The pack is much lighter now without all those camping gears.

From Cotter Hut, one could have bush-bashed one's way westward to Bimberi Peak. We take the longer and easier route, ie walk on the Murray Gap Trail to Murrays Gap which is at the border between ACT and NSW. Then we bush-bash northward to the peak.

A description of Murray Gap and Bimberi Peak is in http://mntviews.blogspot.com/2009/12/bimberi-act-australia.html and won't be repeated here.

We reached the peak at 14:20. Spend 30 minutes browsing around, then it is time to retrace steps back to Cotter Flats for the night.

All up, it is a 12-hr day!!! The last time I had such a long walk was ages ago when I climbed ACT's Mt Kelly from Gudgenby homestead on Boboyan Rd. Admittedly, the Kilimanjaro summit day was longer - 15 hrs; but there were plenty of rests and a long lunch. Whereas these ACT hikes have minimal breaks only.

There are lots of kangaroos around Cotter Flats. They are a friendly and curious bunch. They nose around our stuff; even copulated in front of us!!! Ricky claims that when he pees, some kangaroos come over and drink his urine. How gross!!!

I bought a brand new Blackwolf Cocoon Bivy Tent for this trip. 1.1 kg. It is quite good, easy to set up. But condensation is a problem. The weather is fine, so I have the vinyl flap off, leaving the mesh screen in place to ward off insects. But still, by the morning the inside of the tent is all wet. Fortunately I have a good sleeping bag which keeps me warm and dry.

Next day, up at 6am. Put on the backpack at 7am. Cross the Cotter River on bare feet. The water is freezing cold and painful. Reminds me of the Aconcagua trip where I had to do the same. At the time, I swore I would never do any hiking again if it involves crossing freezing rivers ... and here I'm doing it again!!!

16:20 Leave Murrays Gap.
17:45 Back at junction to Murray Gap Trail.
18:05 Back at Cotter Flats and camp by the west side of Cotter River crossing point.

1. Small post by the Cotter Hut Road - The yellow triangle sign points to a small foot track. Written in small print on the triangle is "Australian Alpine Walking Track". Both the foot track and this post are very inconspicuous. One blink and you will miss it. 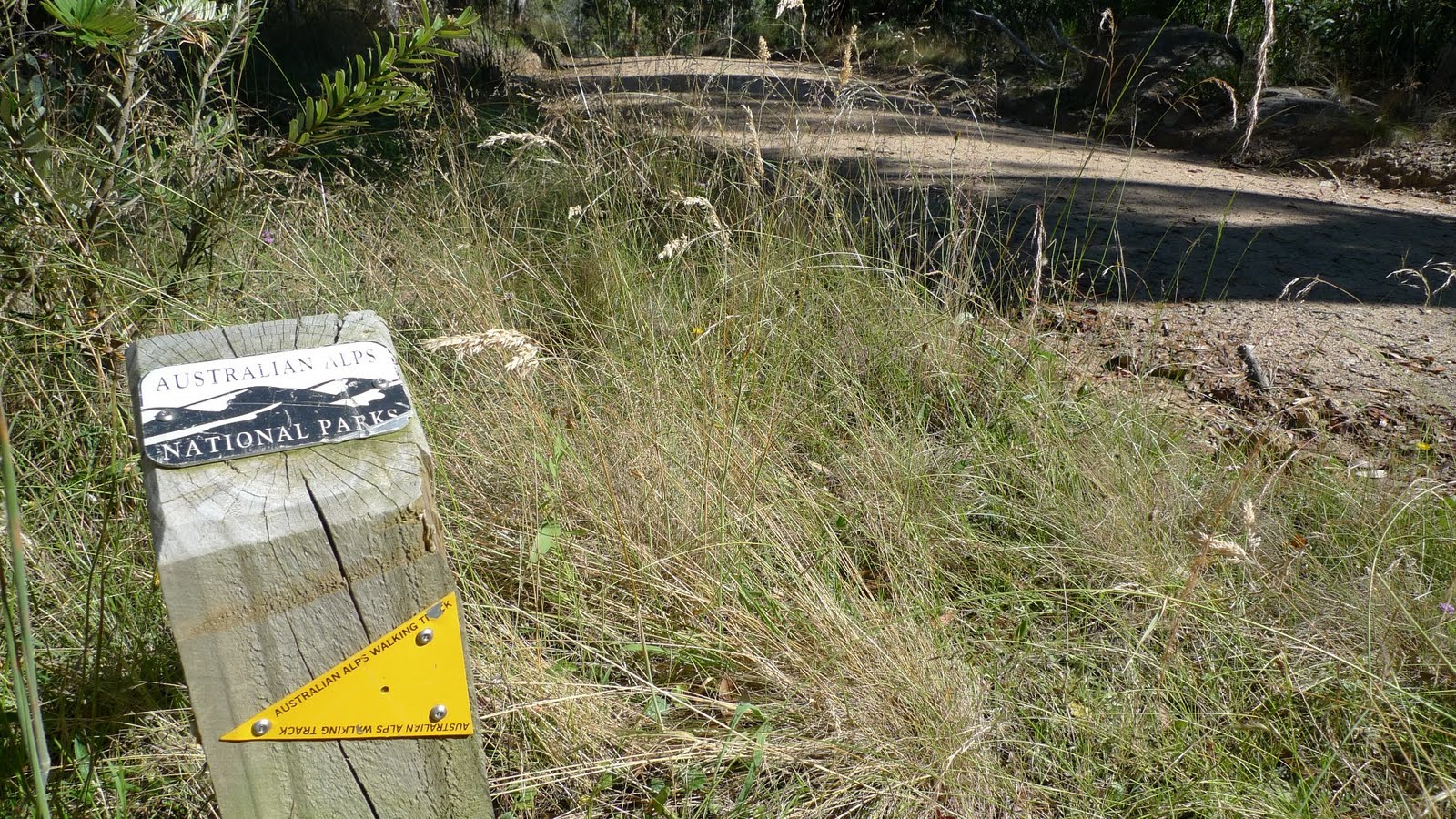 2. The Australian Alpine Walking Track - This is the better part of the trail. Many stretches are completely covered with vegetation, making it very hard to find the trail. 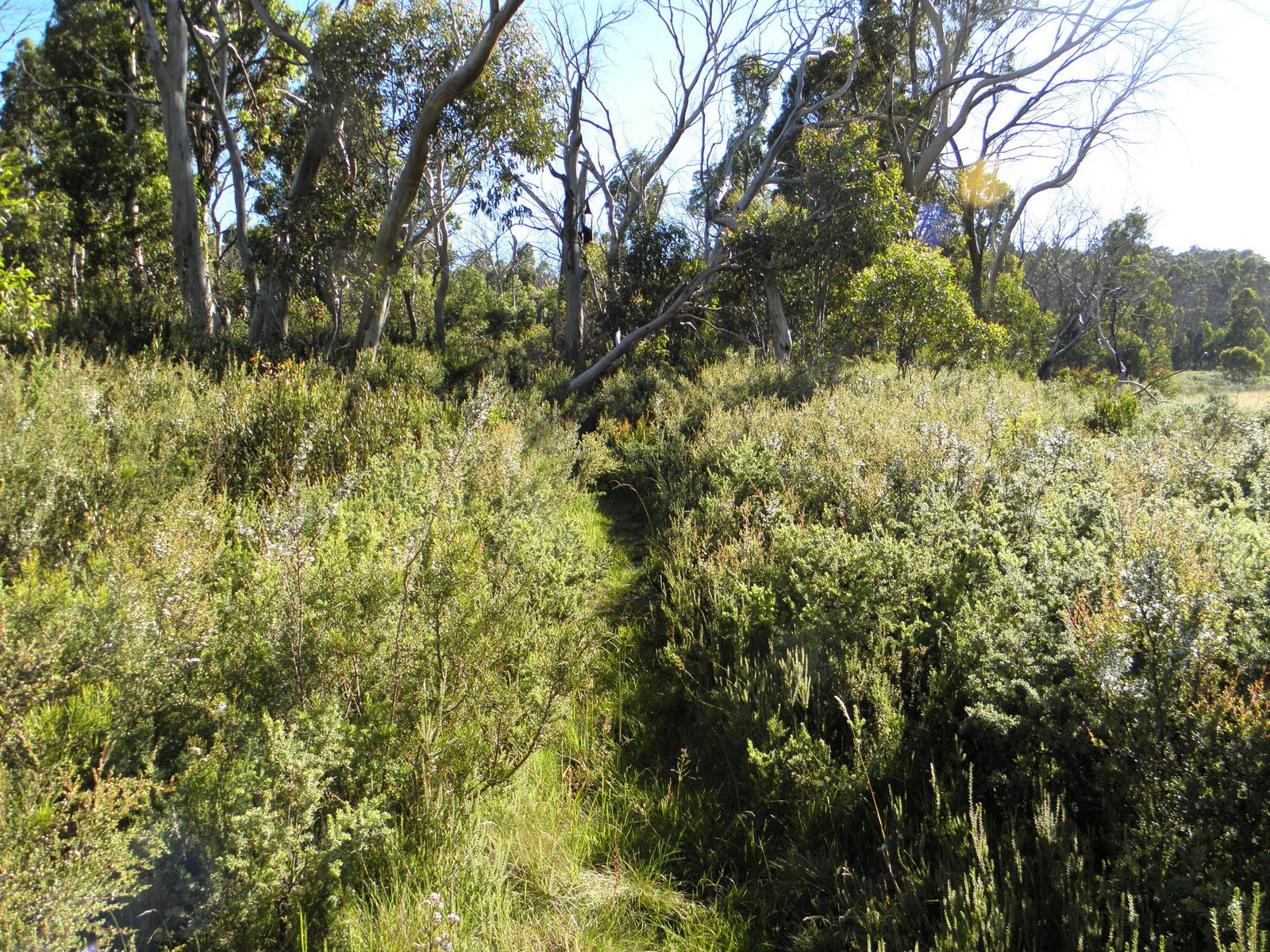 3. A view of Bimberi Peak from Murrays Gap 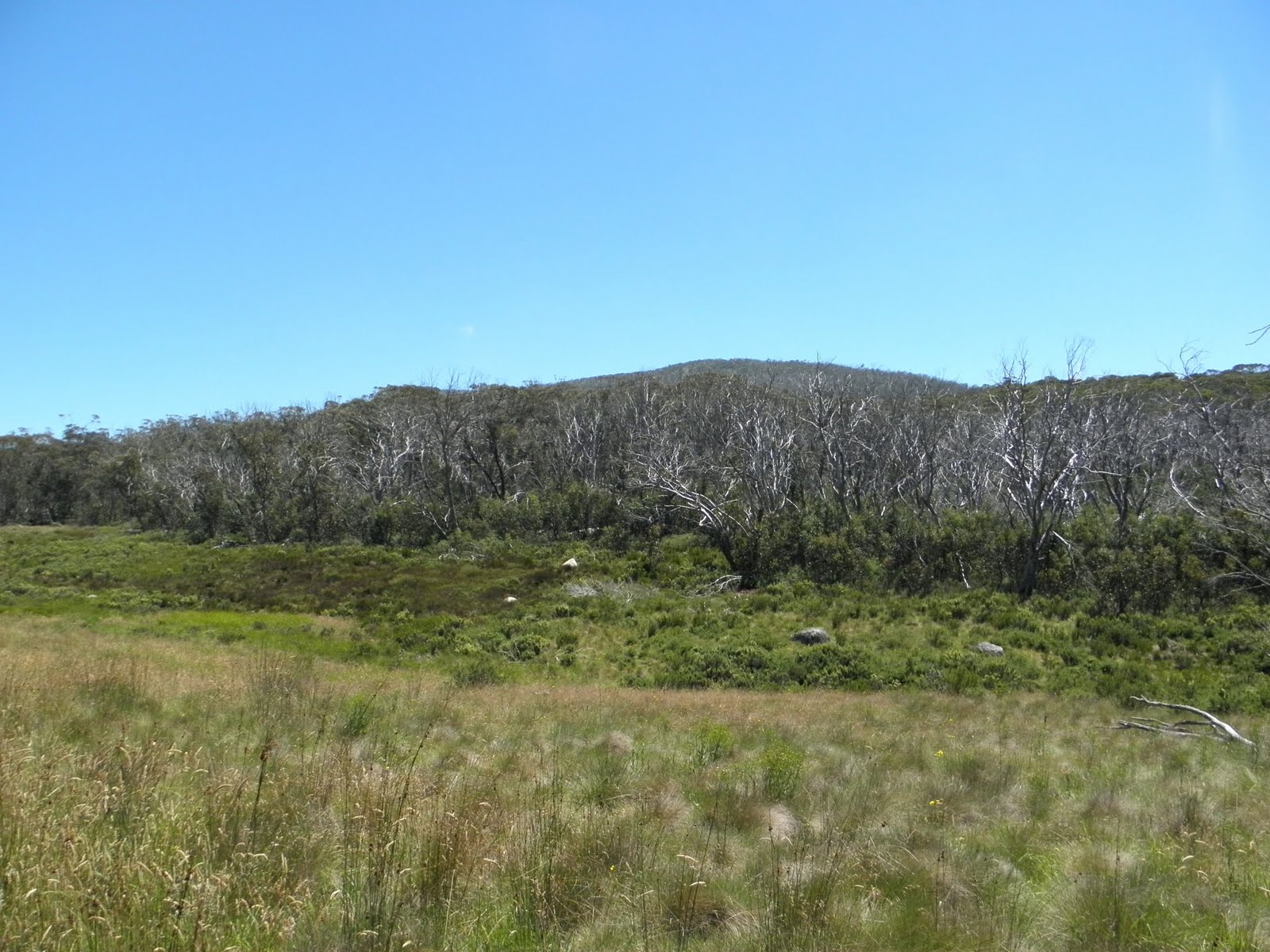 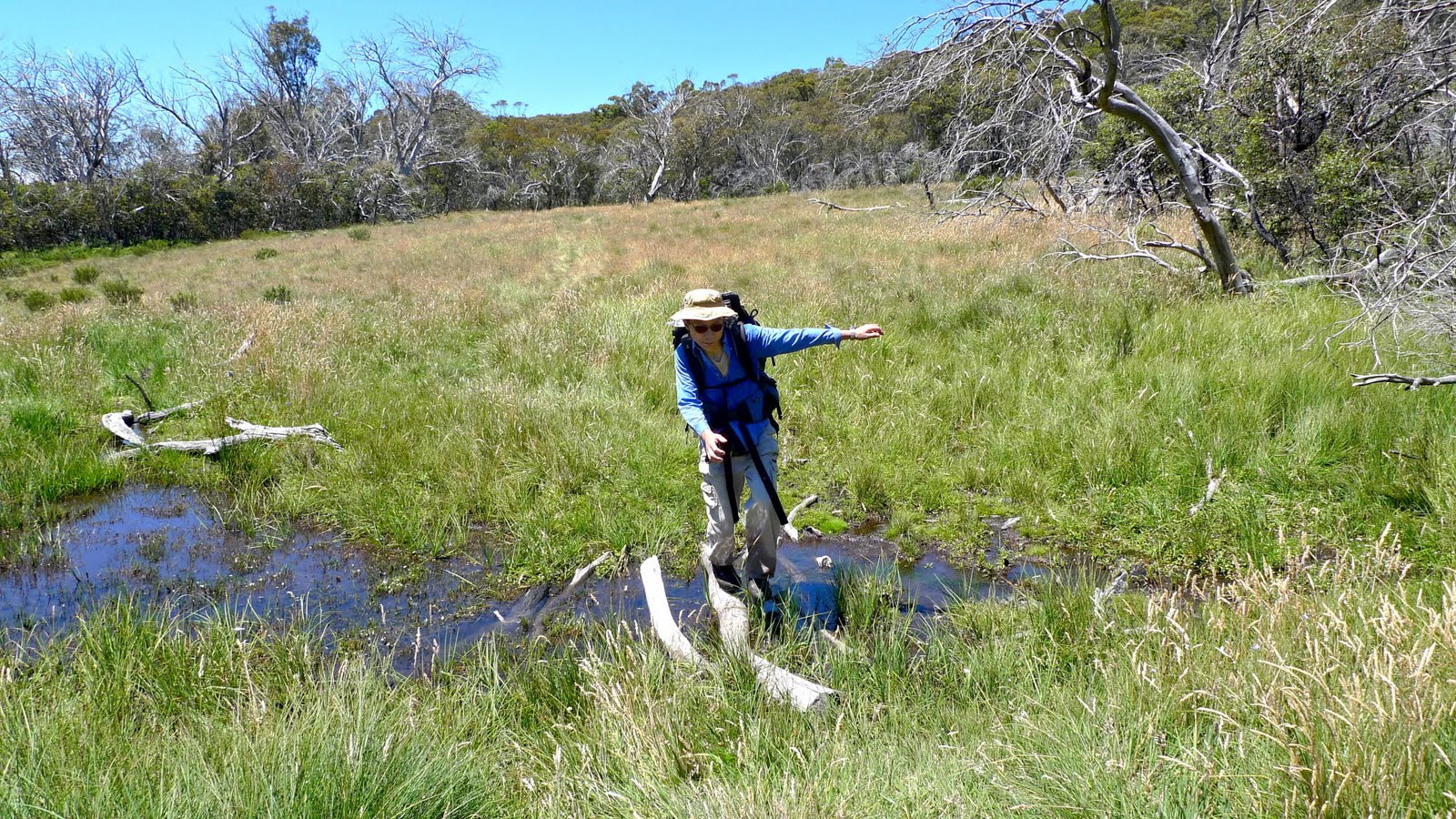 5. At Murray's gap - This sign marks the border between ACT & NSW. There are wild pigs in this area. Avoid them if you can as they can attack you!!! (Just so that there is no misunderstanding, the wild pig is not me, ok!!!) 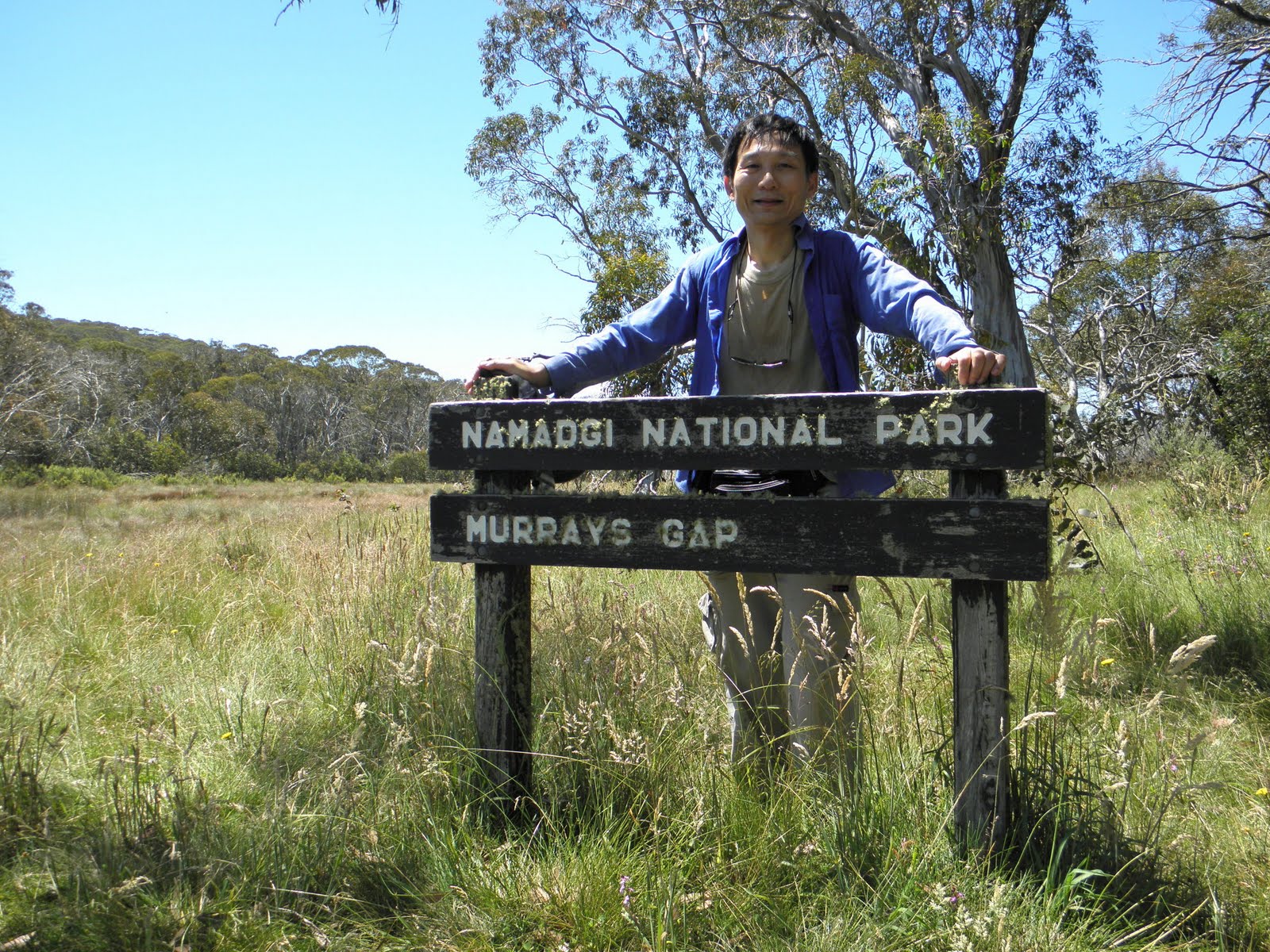 6. There is no trail from Murrays Gap to Bimberi Peak; need to bush-bash to the summit. Here Ricky takes a rest amongst the scrubs. 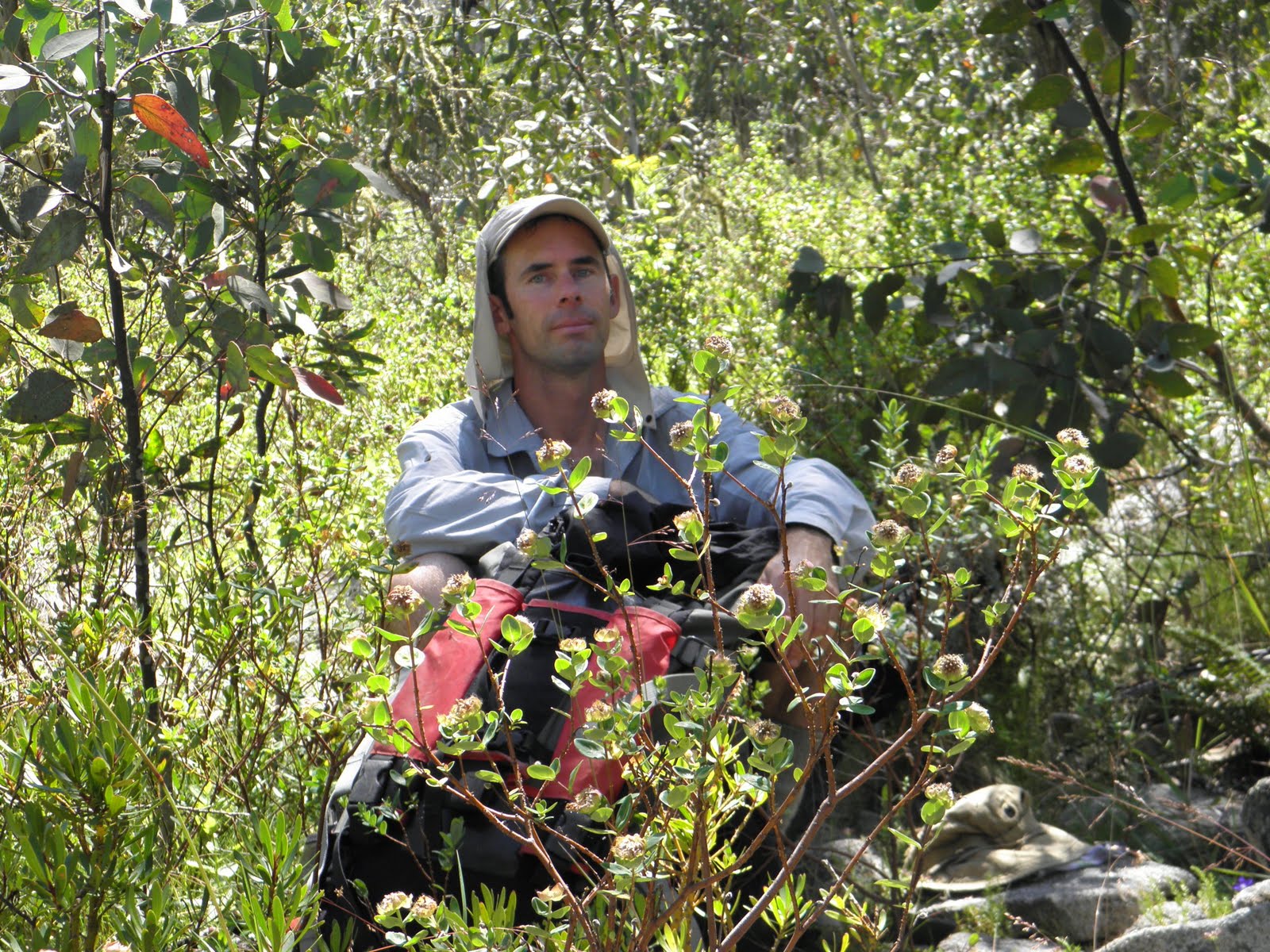 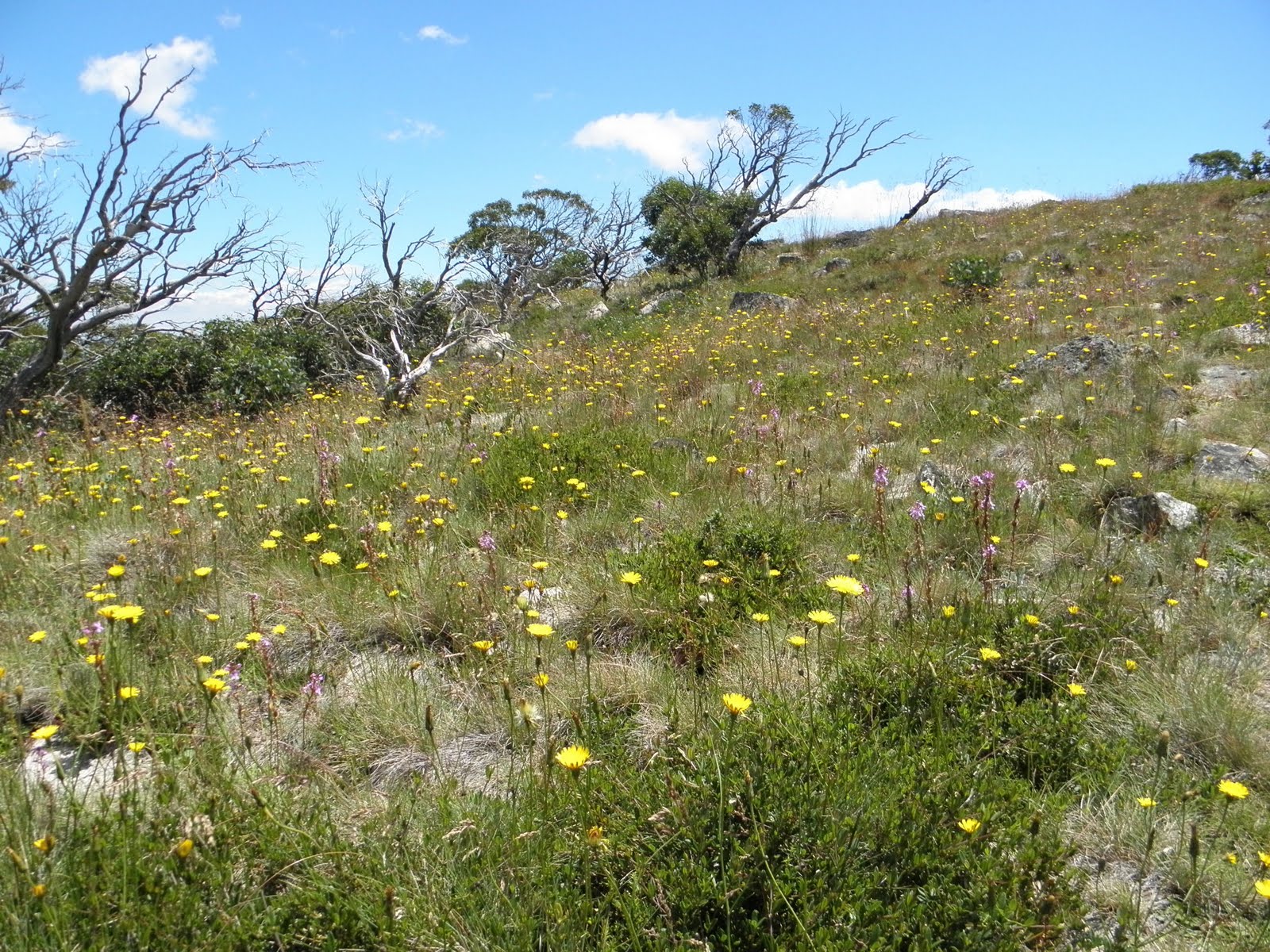 8. I saw this wind-beaten tree the last time I was here. And it is still here. A photo of the same tree is somewhere in http://mntviews.blogspot.com/2009/12/bimberi-act-australia.html 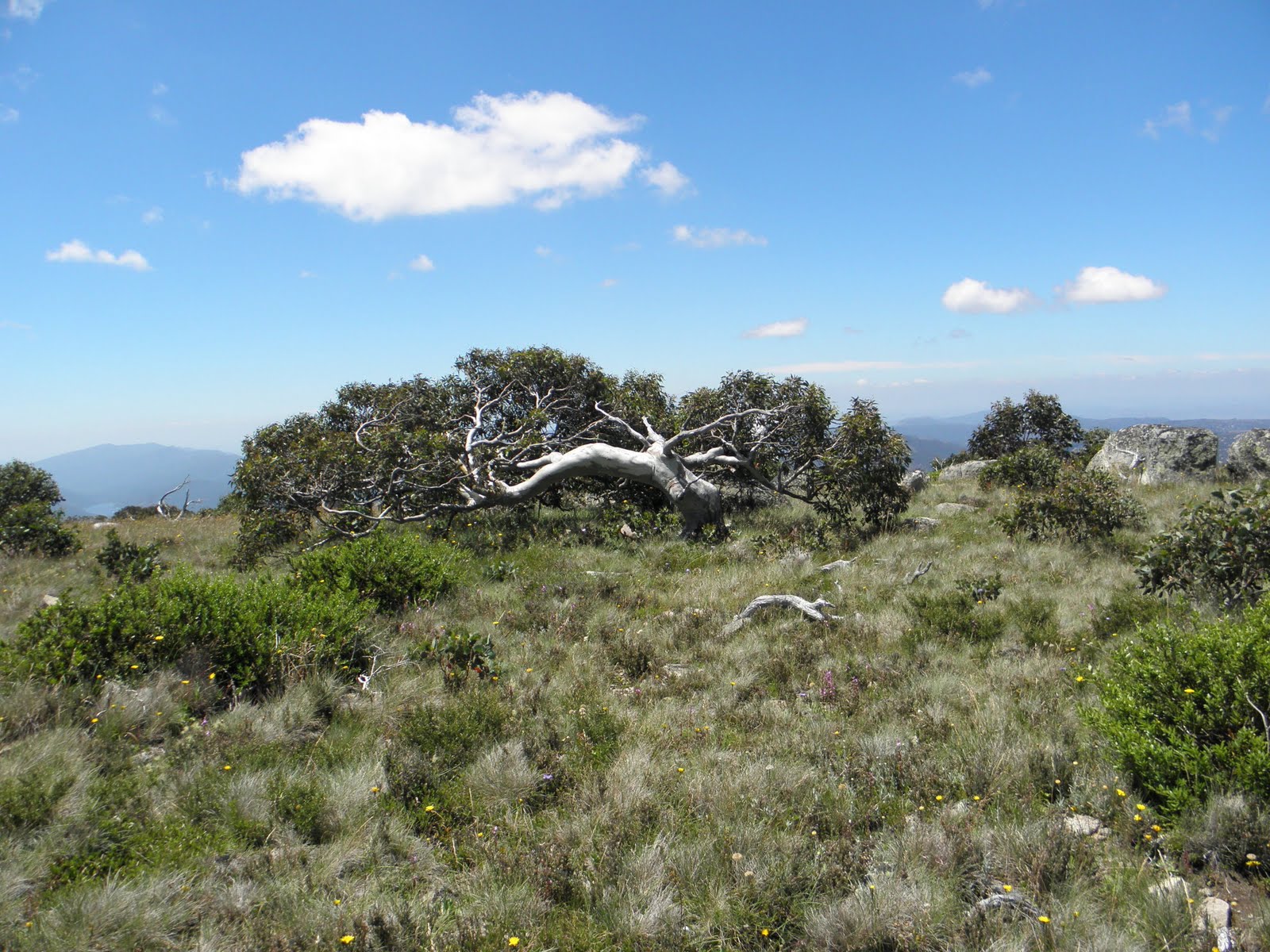 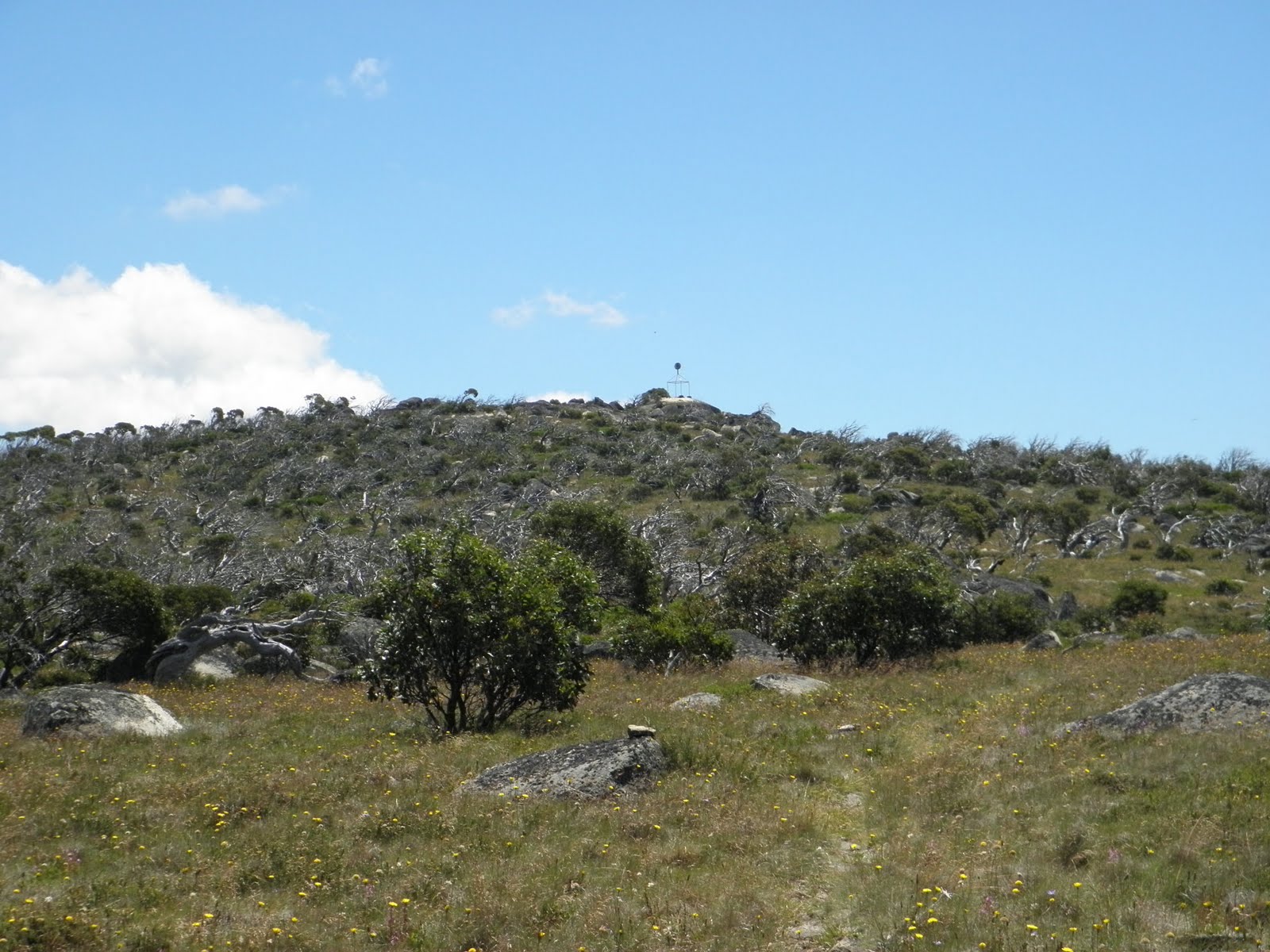 10. Made it!!!
(I got Ricky to carry my bulky camera tripod. The last time I carried it was to climb Qld's Walshs Pyramid. It was heavy!!! From now on, he is going to carry it ... that is why one has a climbing partner ... hehe.) 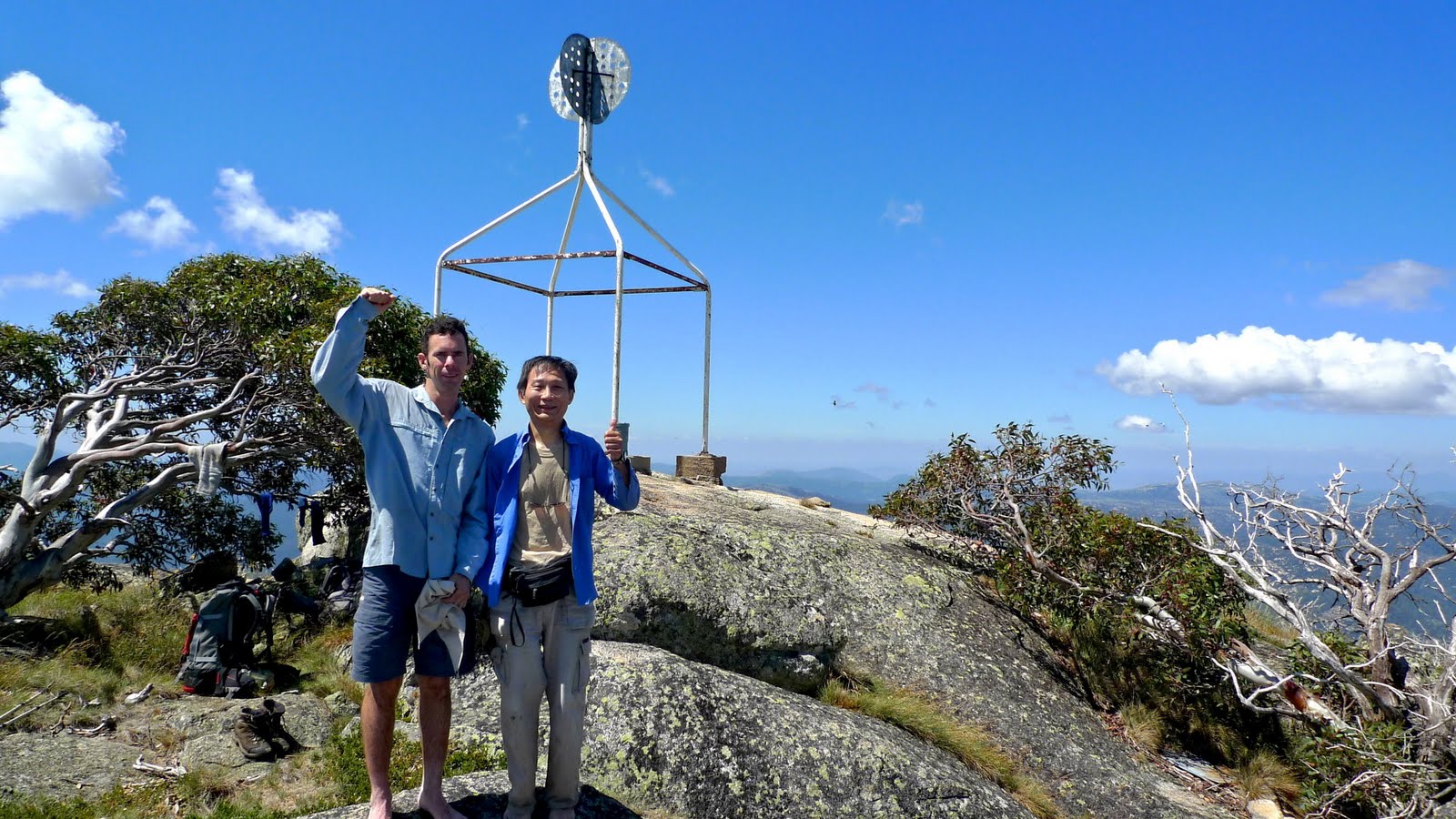 11. Our hiking gears are under the shade of this tree 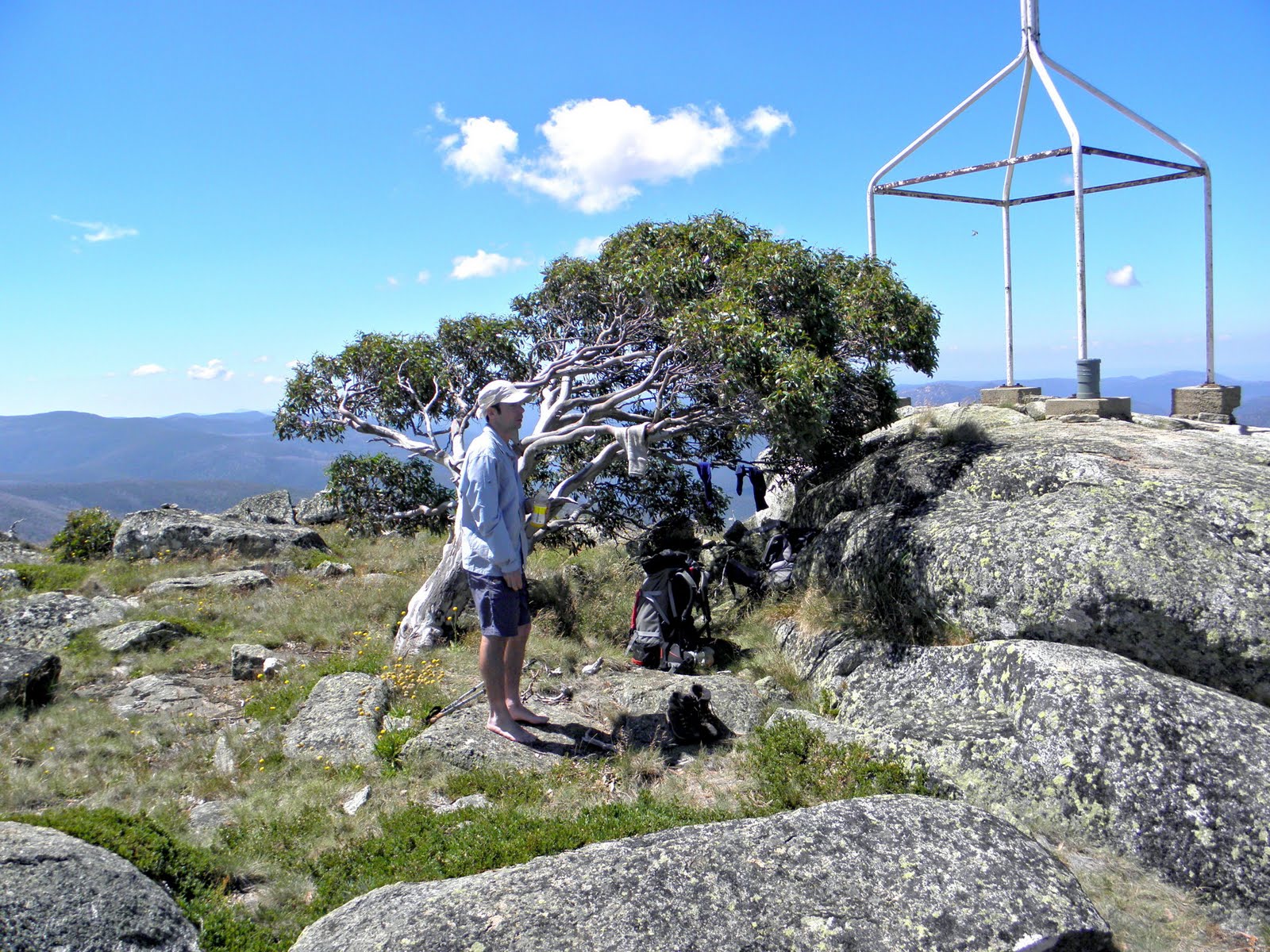 12. My smelly socks hanging here to dry. I always wear 2 pairs of socks. They got wet when crossing the numerous streams - it has been a wet summer. 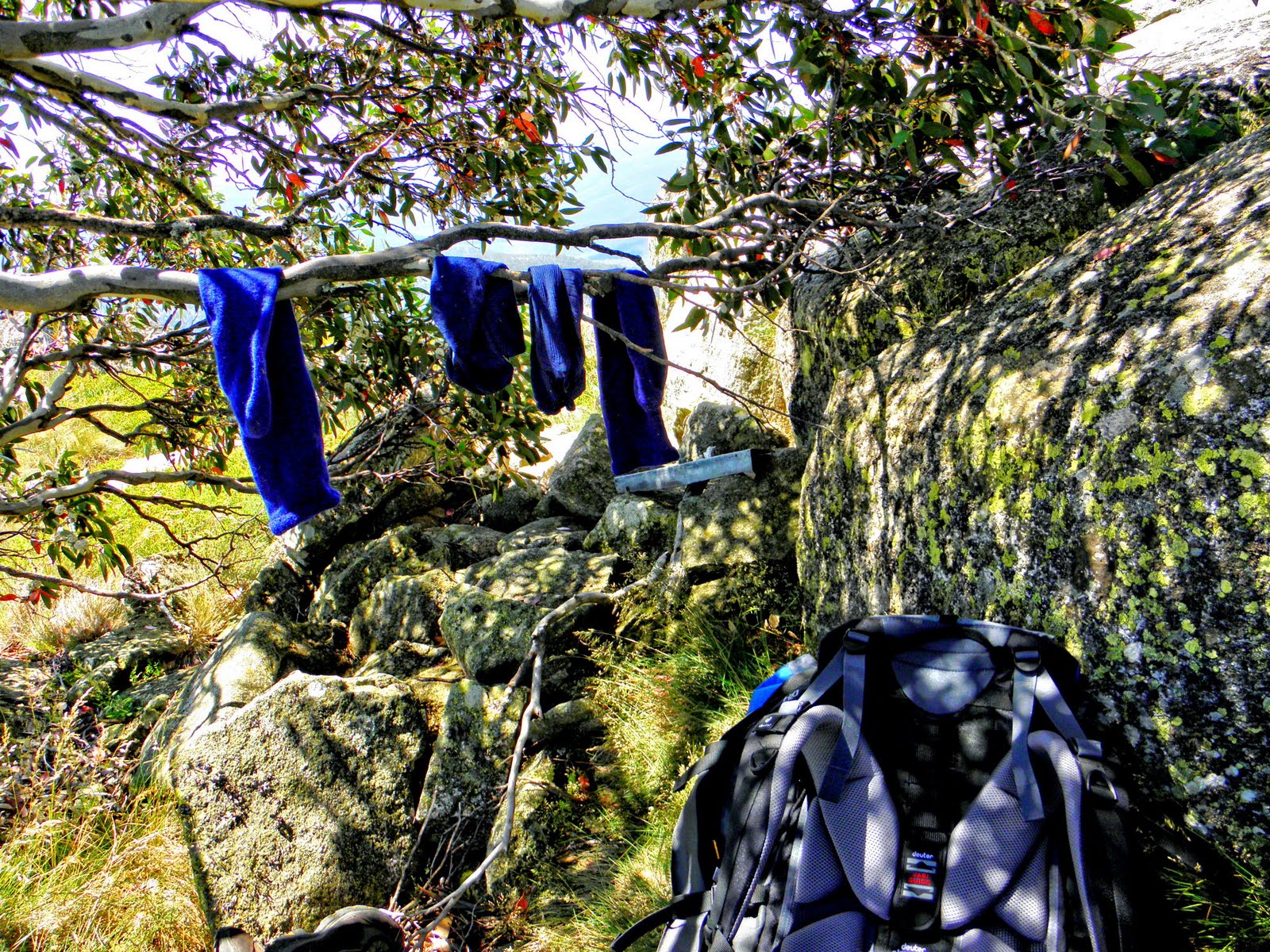 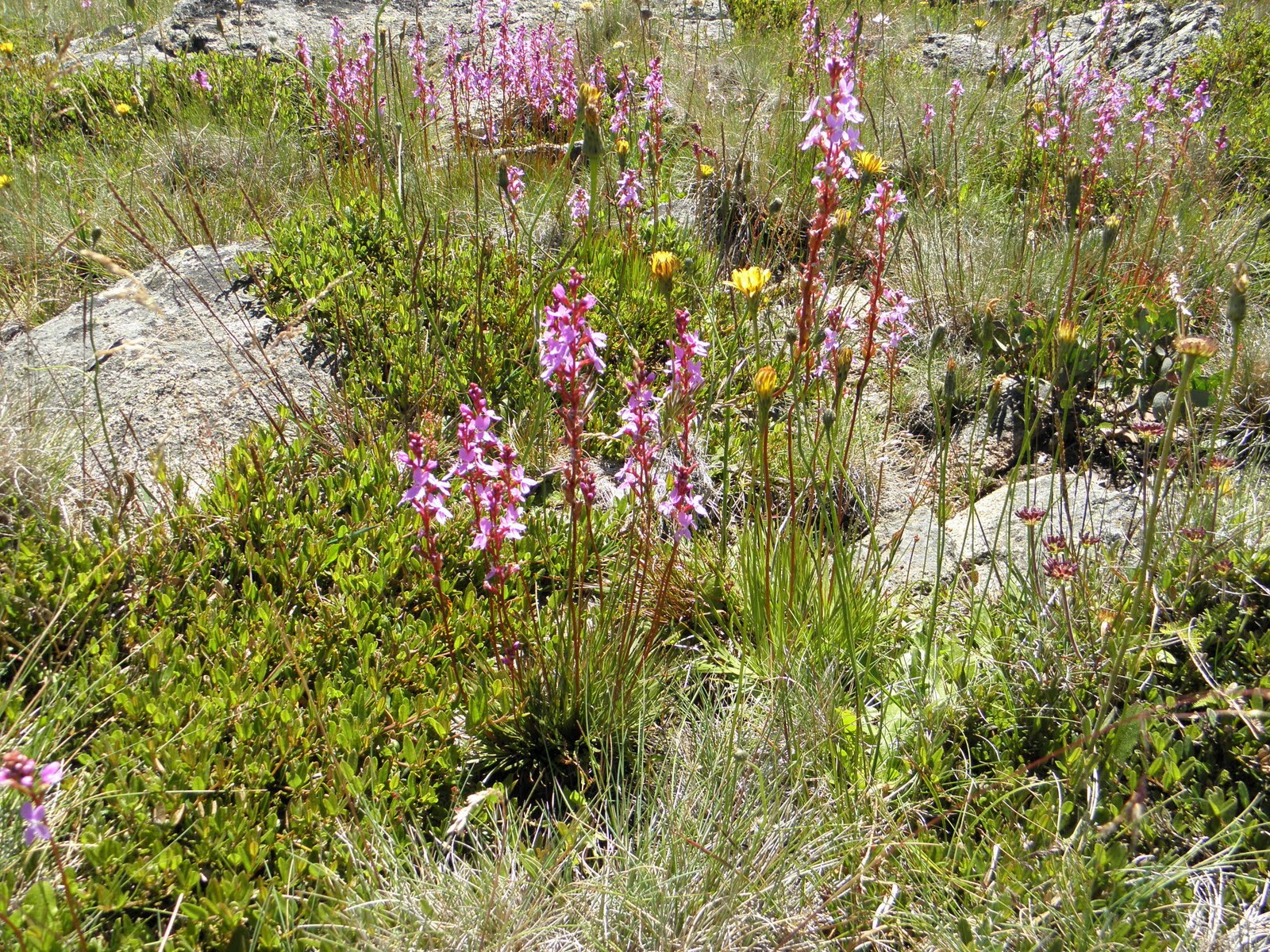 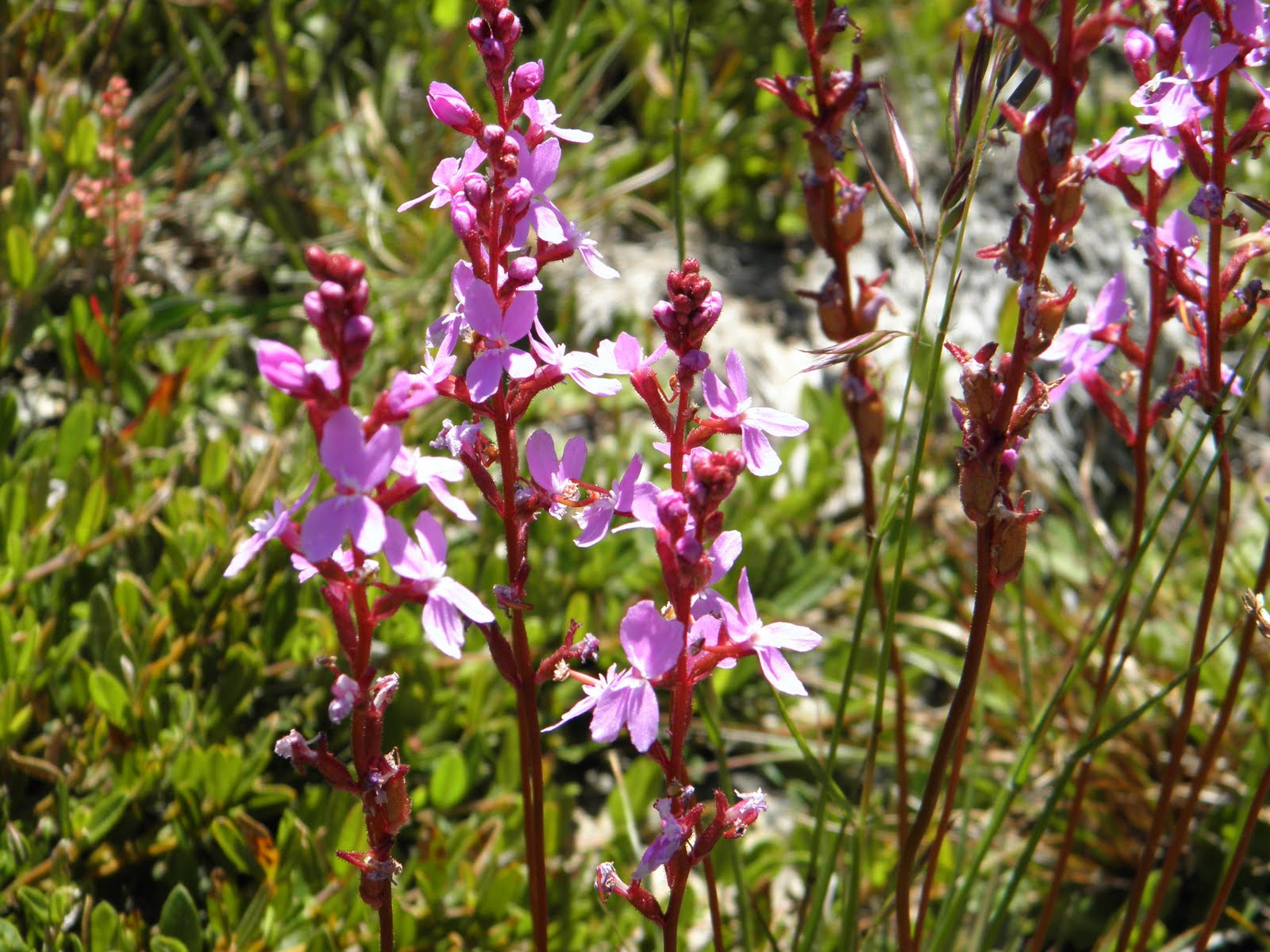 At Cotter Flats for the night

15. Cotter Flats - we camp out around here for the night. 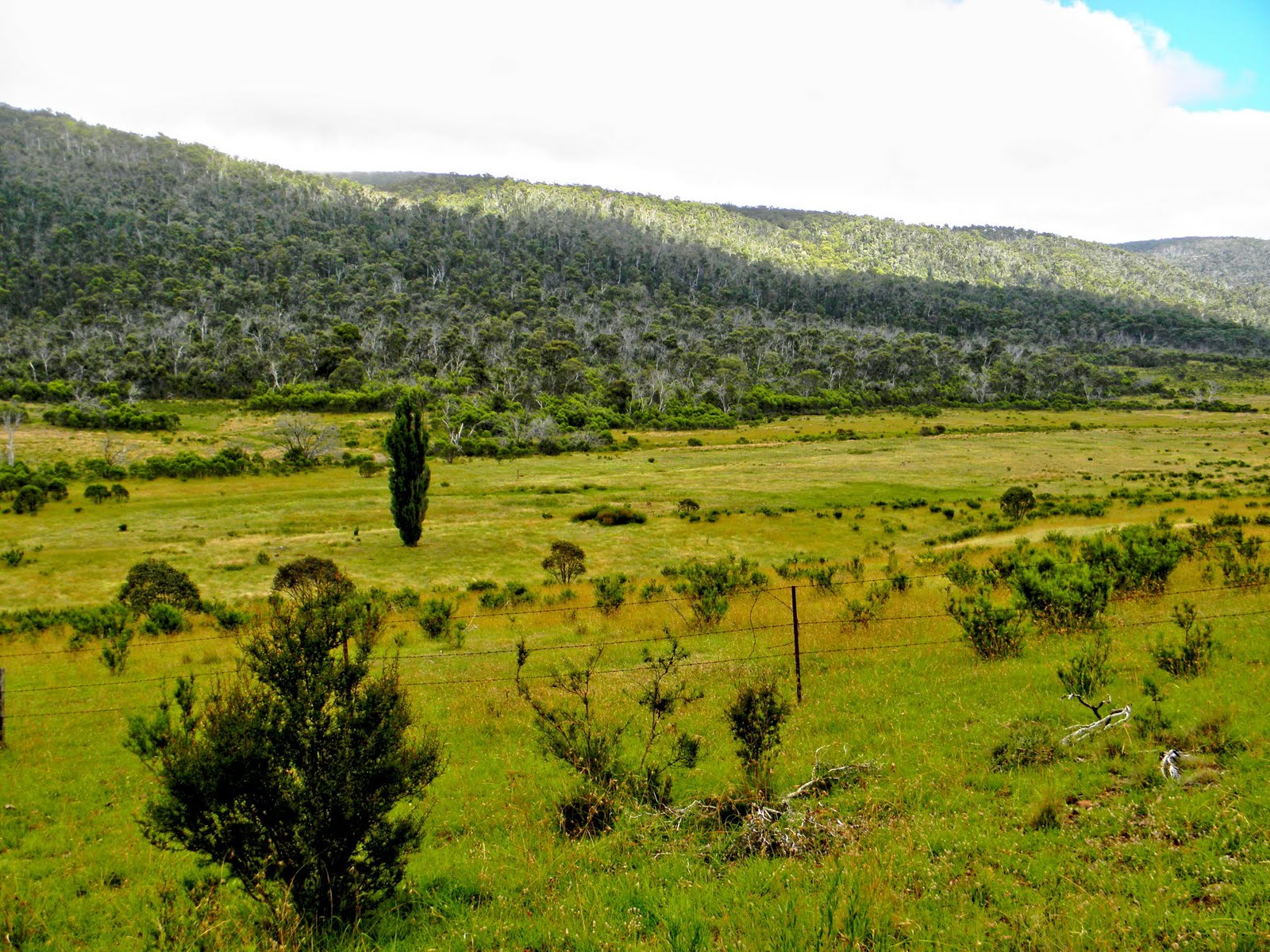 16. Cotter River crossing point at Cotter Flats - We set up tent right here beside the river. 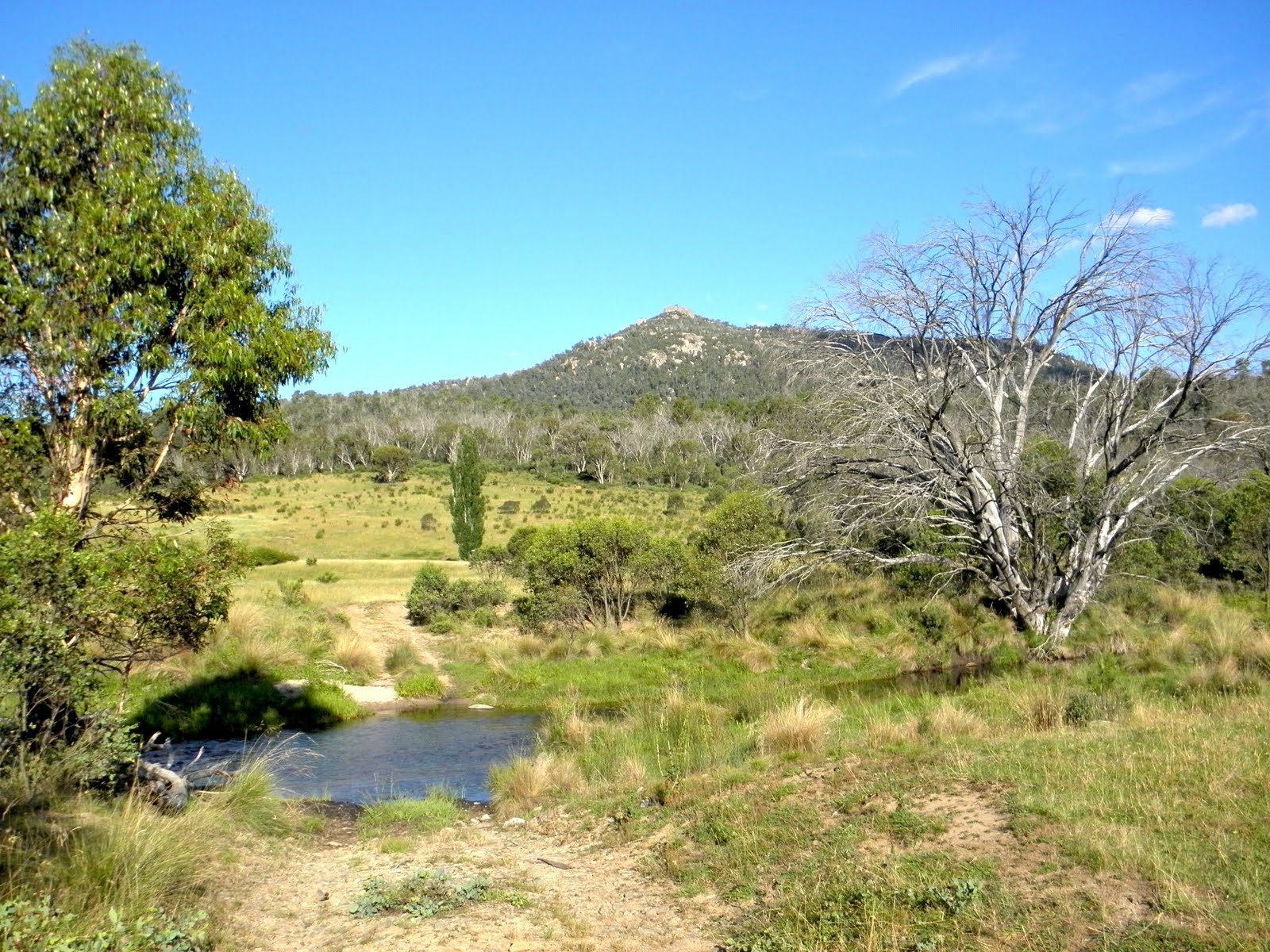 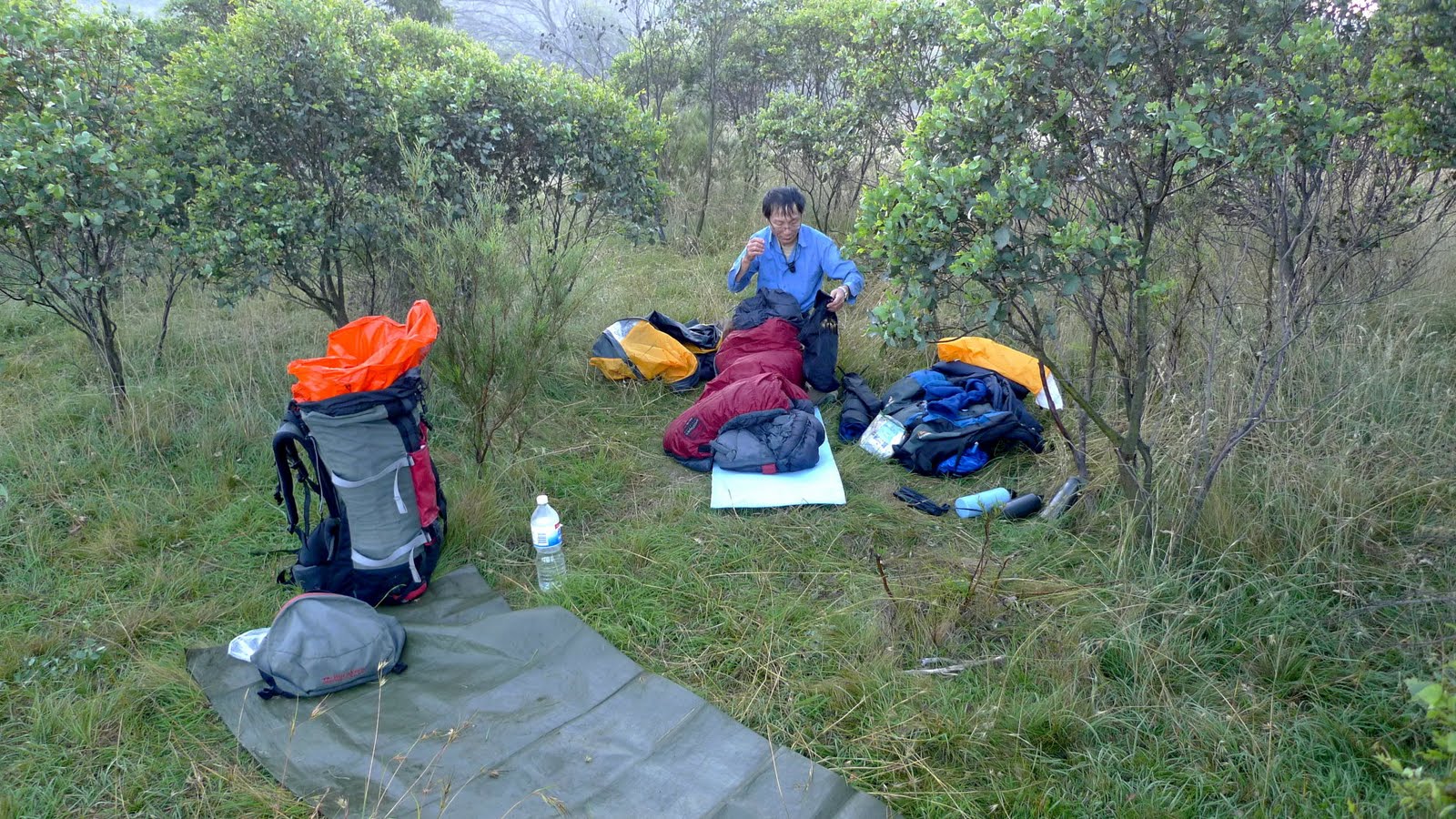 18. A pair of friendly kangaroos inspecting my cocoon bivy tent 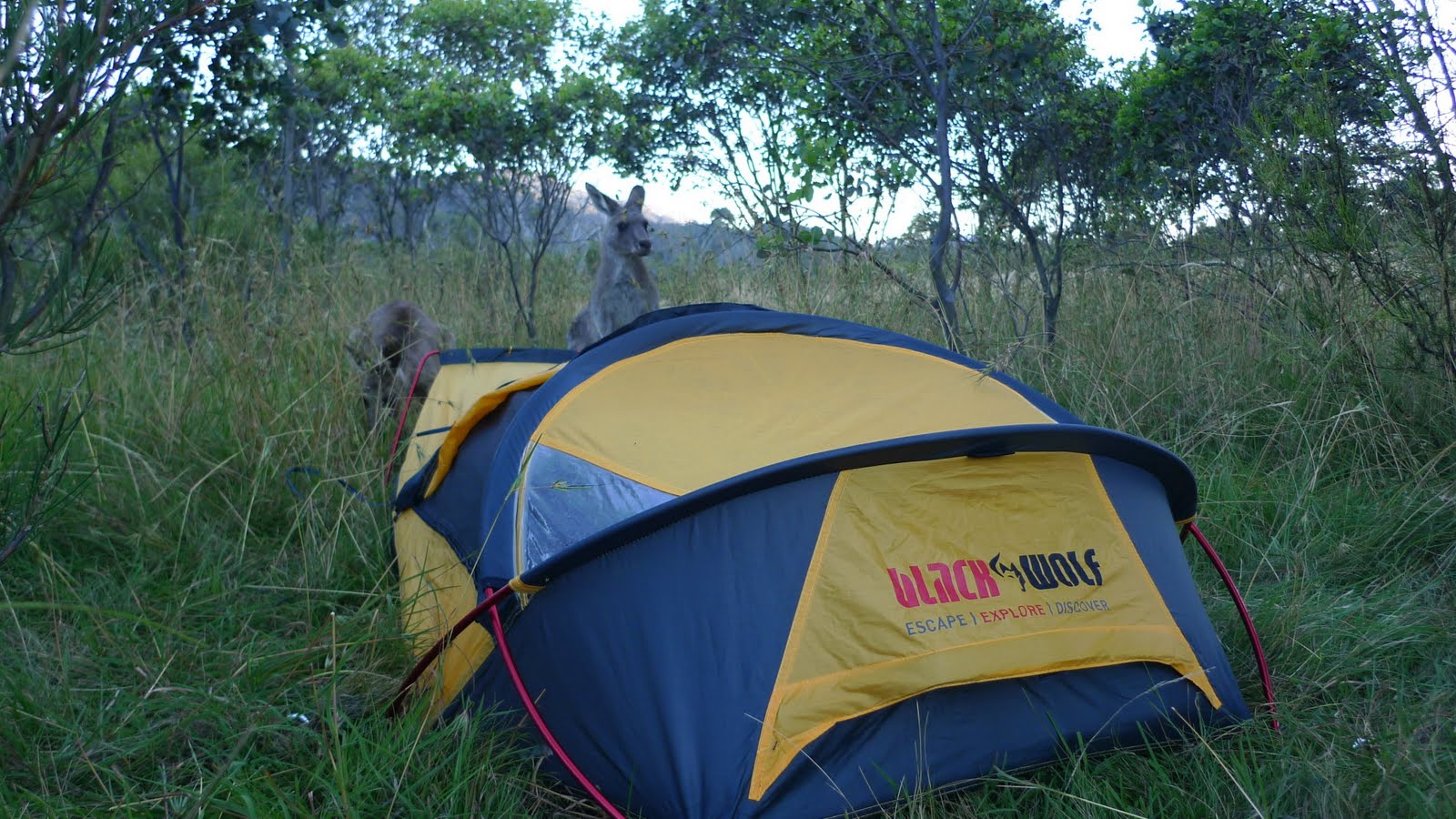 19. Caught in the act!!! Kangaroos having sex right in front of me!!!
There are lots of kangaroos around here. They are friendly and curious. They nose around our stuff. Ricky claims that when he pees, some kangaroos come over and drink his urine. How gross!!!

Day 2: Return to the car

20. Early next morning, I cross the Cotter River on bare feet.
The water is freezing cold and painful. Reminds me of the Aconcagua trip where I had to do the same. At the time, I swore I would never do any hiking again if it involves crossing a freezing river ... and here I'm doing it again!!! 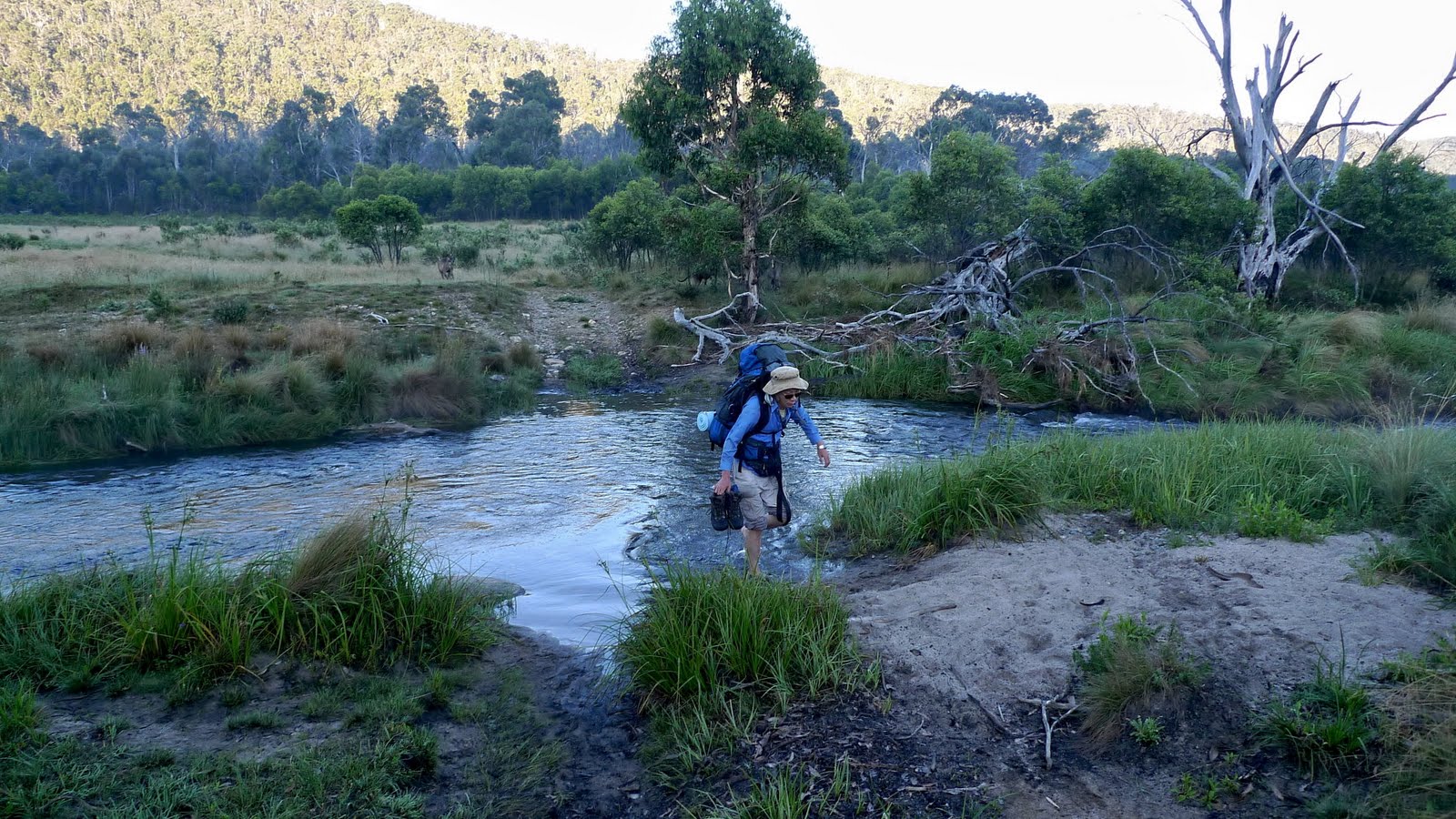 21. Ricky and the friendly kangaroos 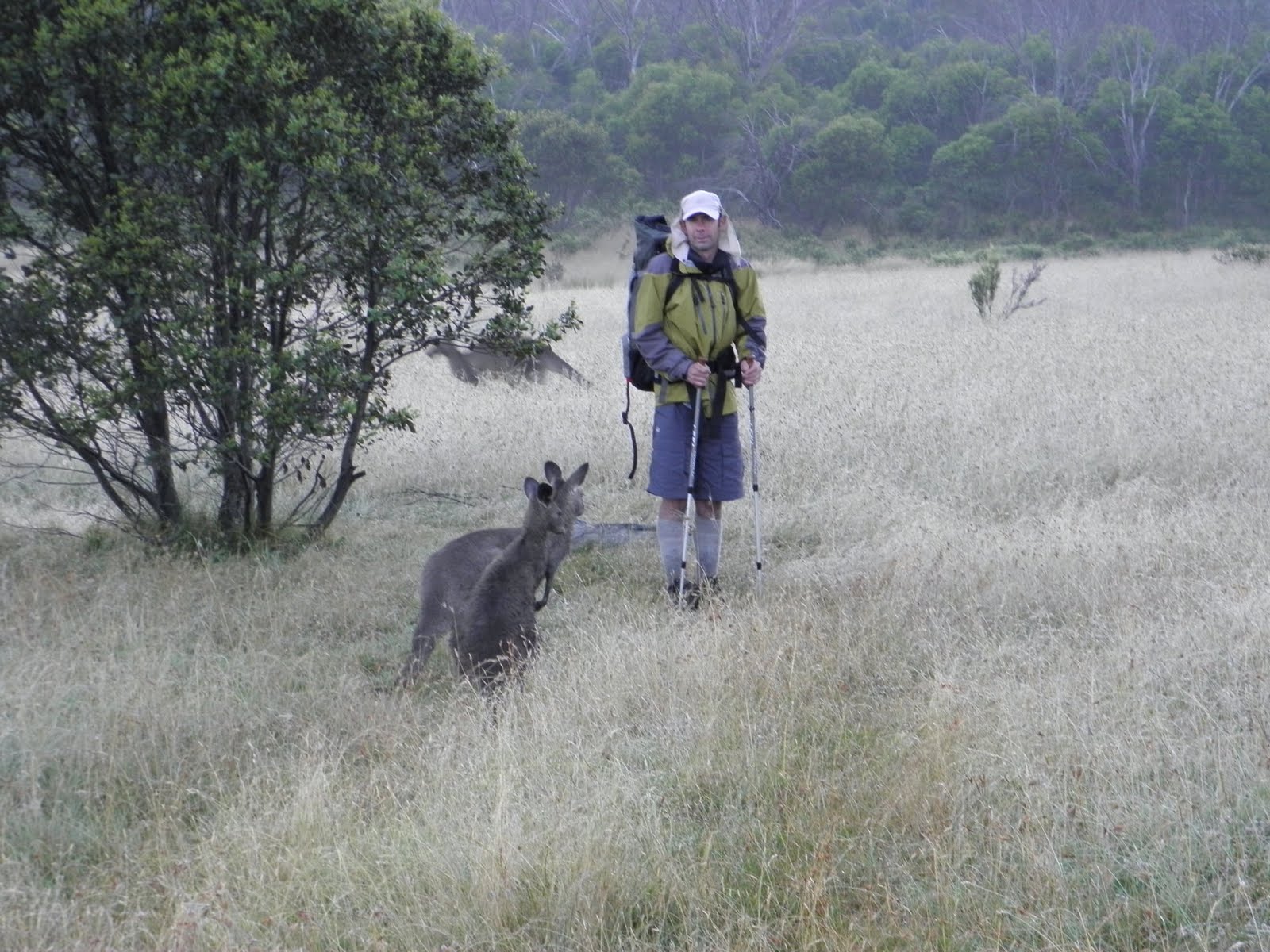 22. Silybum marianum - it has many common names, Milk Thistle for example. Originating near the coast of southeast England, it has since been distributed widely all over the world. Many countries, including Australia, consider it as an invasive weed. However extracts from it are supposed to be good for liver, kidney and gall bladder problems. (Photograph taken near our car at the abandoned Orroral Tracking station.) 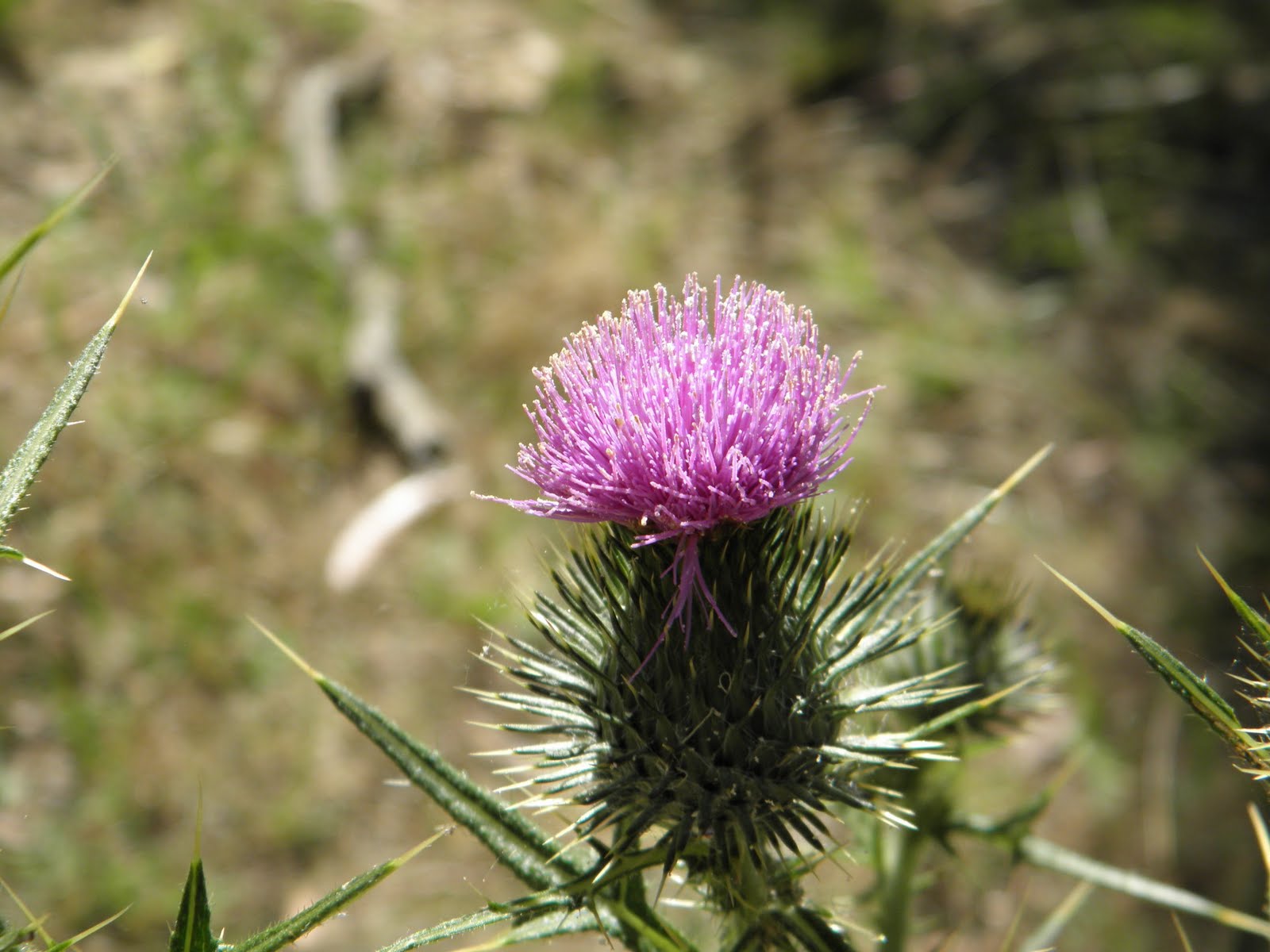 23. Kangaroos avoiding the hot summer sun. (Near our car) 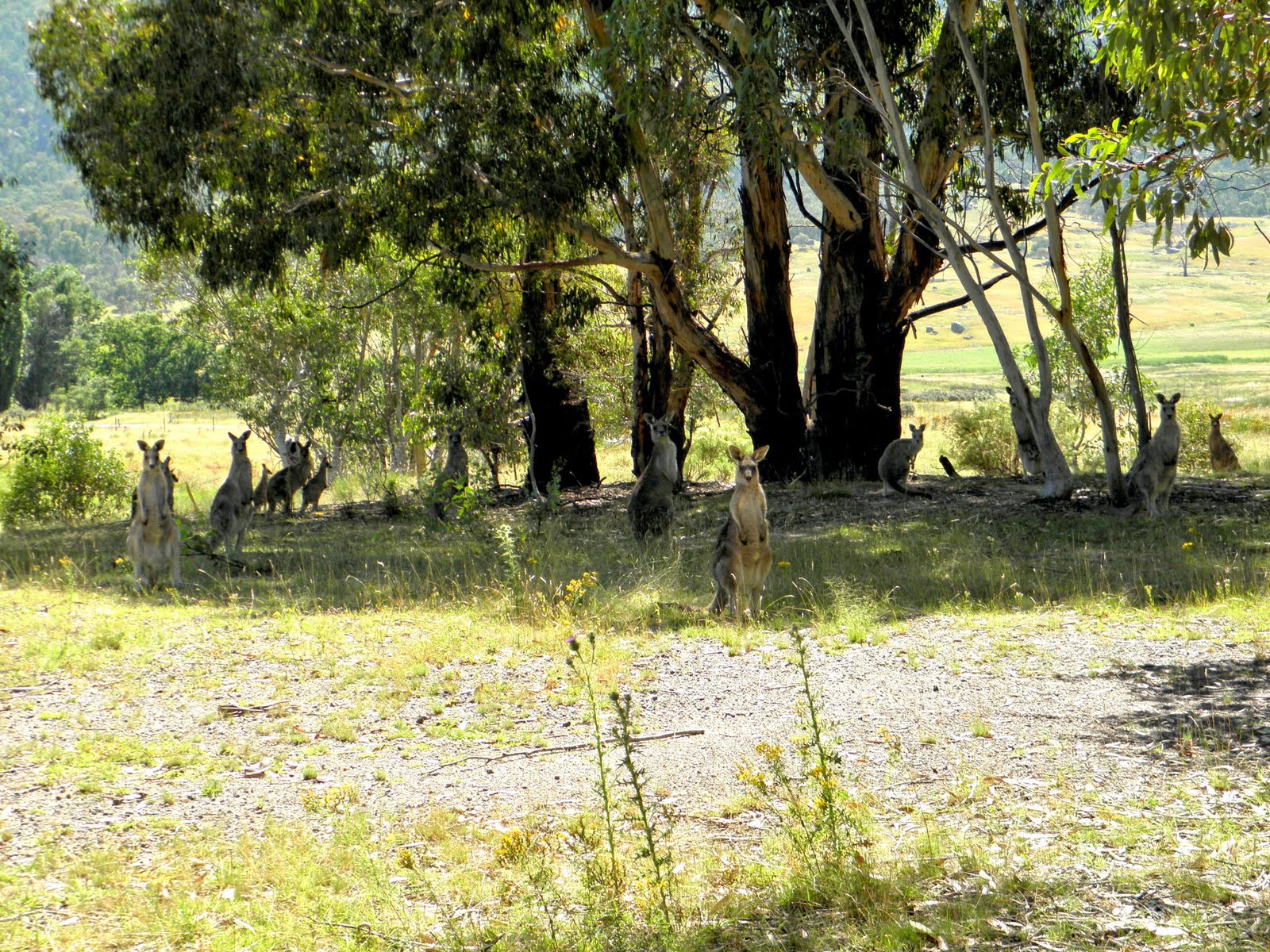 This is part of my mission to climb the highest peak in all 8 Australian States & Territories ... called State-8 Peaks.