Prolog - List of named peaks in ACT above 1700 meters

Today's climb, with BR, is to Mt Namadgi, 1791 meters. In my list above, it is the 6th highest named peak, and one of the remotest mountains in ACT.

The view from the summit is excellent. But to get there is not so simple ... this trip costs us 19.5 hours !!!

One reason we took so long was because on the return leg, from 8pm to 1:30am, we were in the middle of the night, bushbashing in the dark in dense bush. But even if we had total daylight, we would still require about 16 hours. So, with hindsight, we took the trip too leisurely earlier on, should have bushbashed much faster in the morning.

This was the first time I went on a climbing trip without taking enough batteries for my GPS ... well, I didn't anticipate the trip to take 19.5 hrs. I had expected a regulation climb of 11 hours only. Also, I expected BR to bring his own GPS ... but his GPS was broken in an earlier trip. To conserve power, I turned off my GPS on the return trip. Fortunately, BR is a good navigator and was able to guide us down the mountain, even in complete darkness and in the bush. Only occasionally did I need to turn on the GPS for a minute or two to confirm our positions.

But still, without a GPS, we were a bit slow.  On two occasions, we even went backwards while in the dark. Lessons learnt: Always bring enough batteries for the GPS to last 24 hours !

The relevant part of the 1:25,000 scaled map can be downloaded from:
https://drive.google.com/file/d/0B877-h5SCJaSekNDelRvOVFpYk0/view?usp=sharing

The below map is from the 1:50,000 scaled Rooftop's Namadgi map.
But ... Warning:
- Where Yankee Hat is in the map, it should be an unnamed 1558-meter hill.
- Yankee Hat itself should be at the next hill to the north-east. 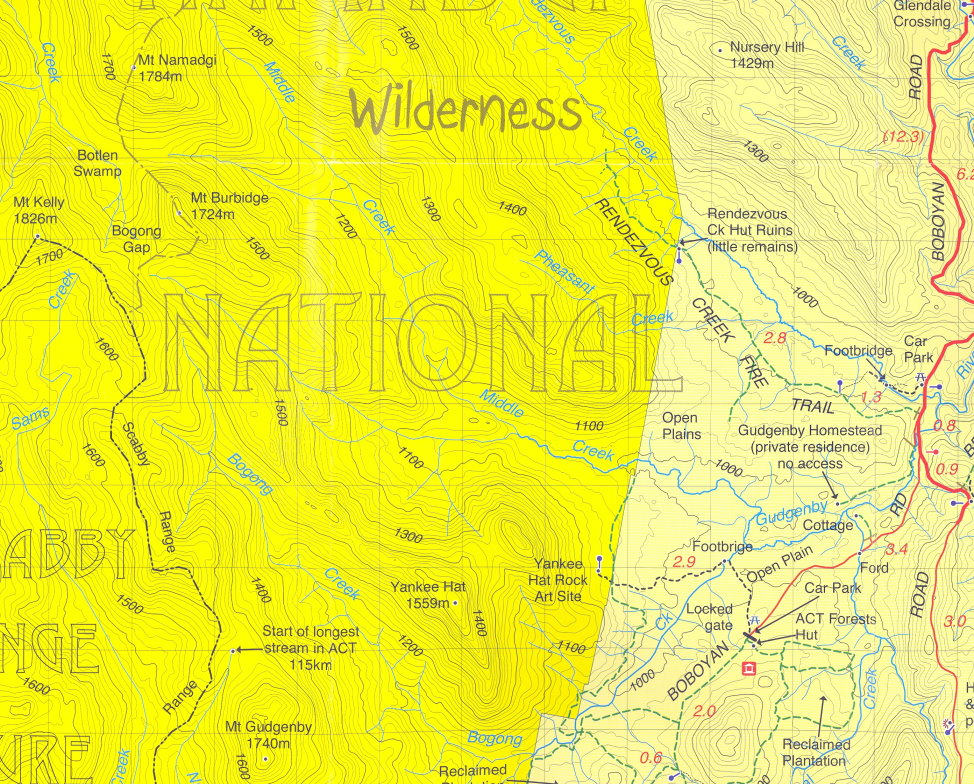 The starting point of the Mt Namadgi climb is at Yankee Hat Carpark on Old Boboyan Rd.

The GPX tracklog file of our walk can be download from:
https://drive.google.com/file/d/0B877-h5SCJaSekptT0pYU0MxbTQ/view?usp=sharing

The 1:25,000 scaled map with our tracklog superimposed on it can be downloaded from:
https://drive.google.com/file/d/0B877-h5SCJaSTERjRkw2MENHUGs/view?usp=sharing

In summary, our route is:
•  Start at Yankee Hat carpark.
•  Once we pass the open plain and into the scrub, keep to the north side of Middle Creek.
•  Walk to Big Creamy Flats until we are north of Mt Namadgi.
•  Climb Mt Namadgi.
•  Return trip is to retrace our steps back to the car.

1)  While waiting for BR to arrive, I take this picture of the open plain at Yankee Hat carpark at 5:41am with the moon in the sky. (First light at 5:36am; Sunrise at 6:03am) ~~~
- Red arrow points to mist covered Yankee Hat.
- Blue arrow points to the valley through which Middle Creek flows.
We'll be walking up the valley on the north side of Middle Creek (In the photo, it is on the right side of the valley.) 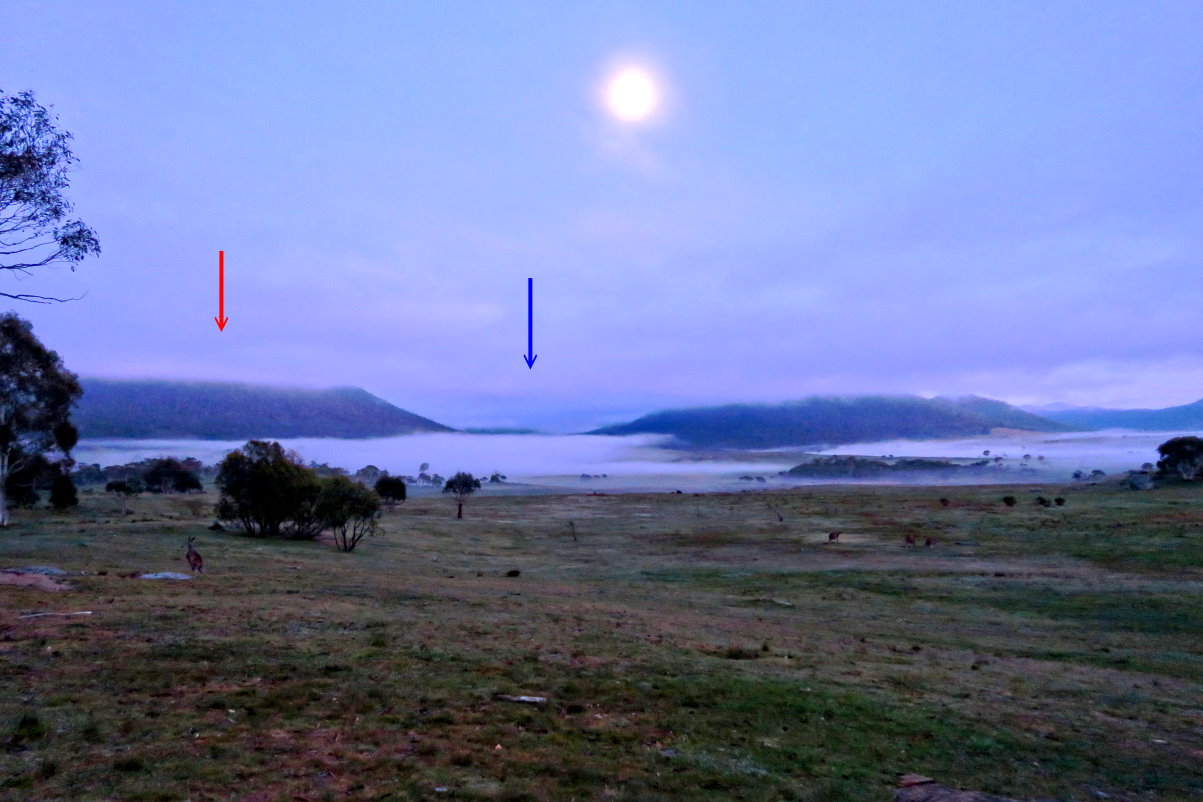 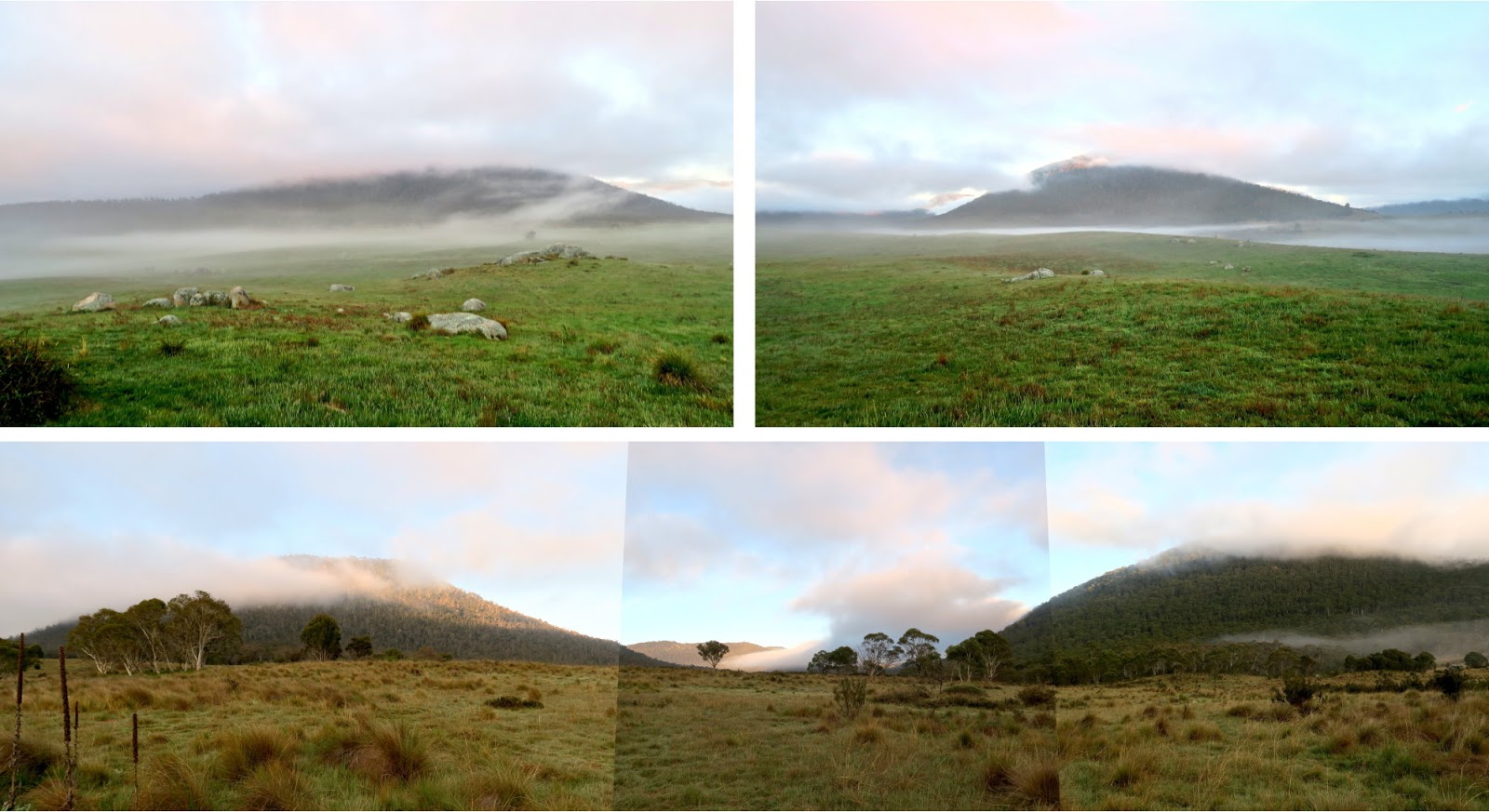 4)  Looking back at Yankee Hat carpark - the red arrow 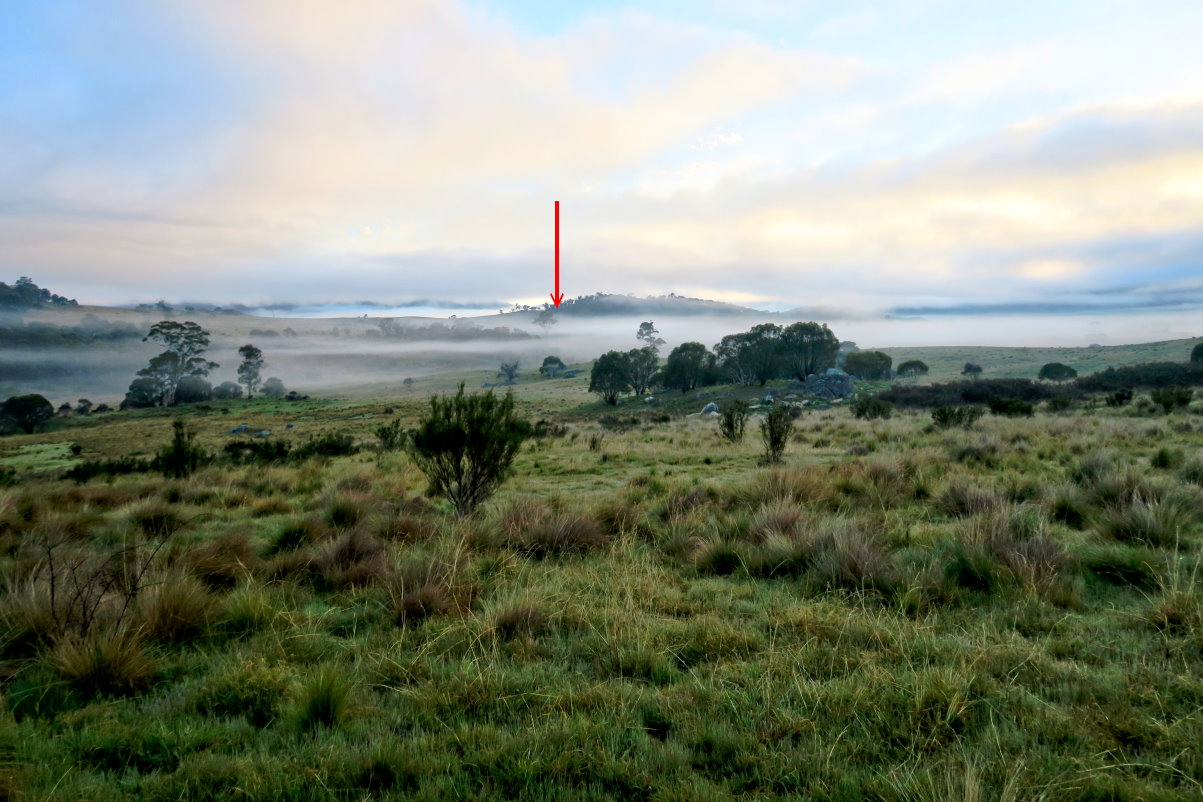 5)  After an hour of walking in the open plain, it is bushbashing time. 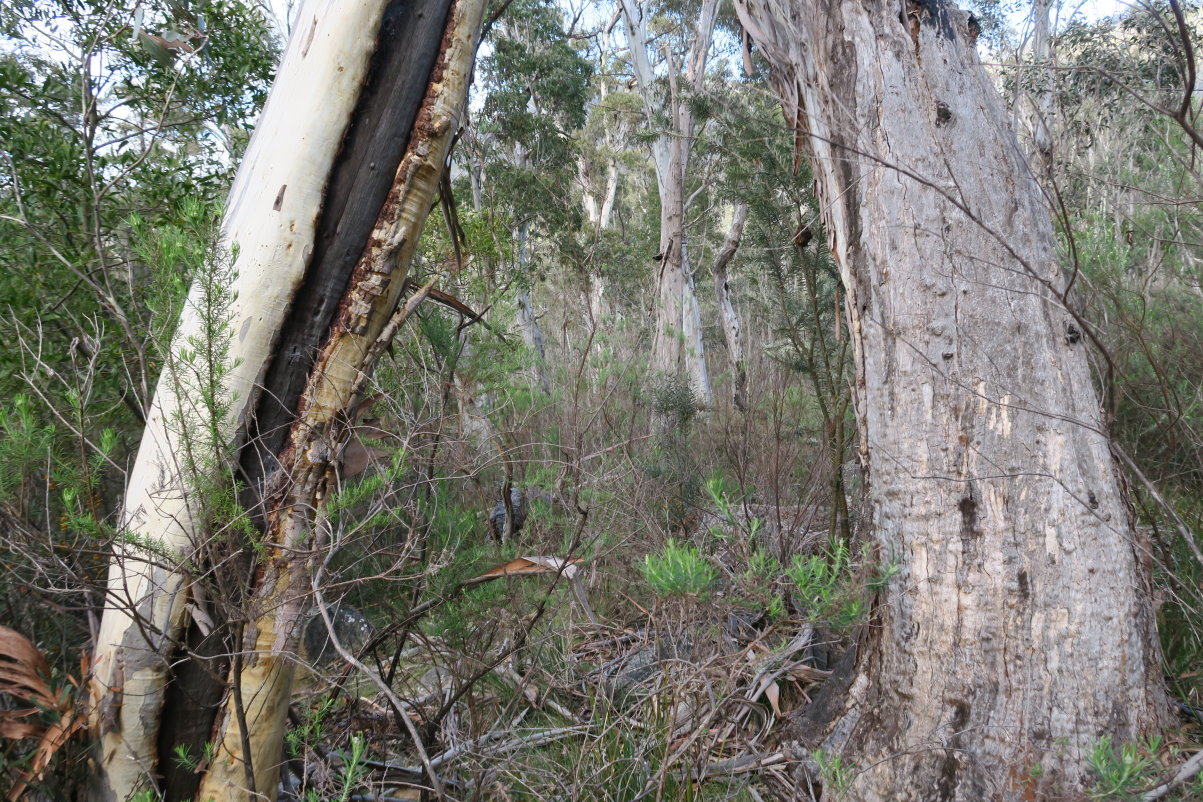 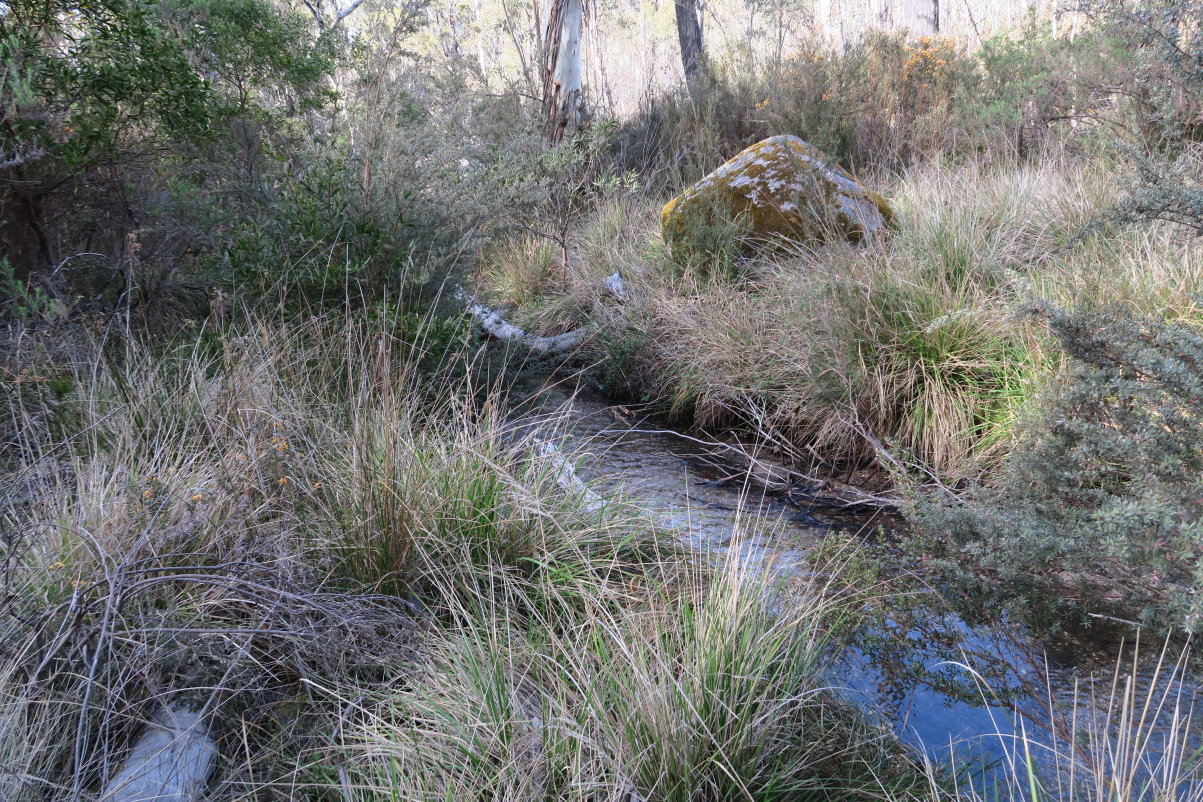 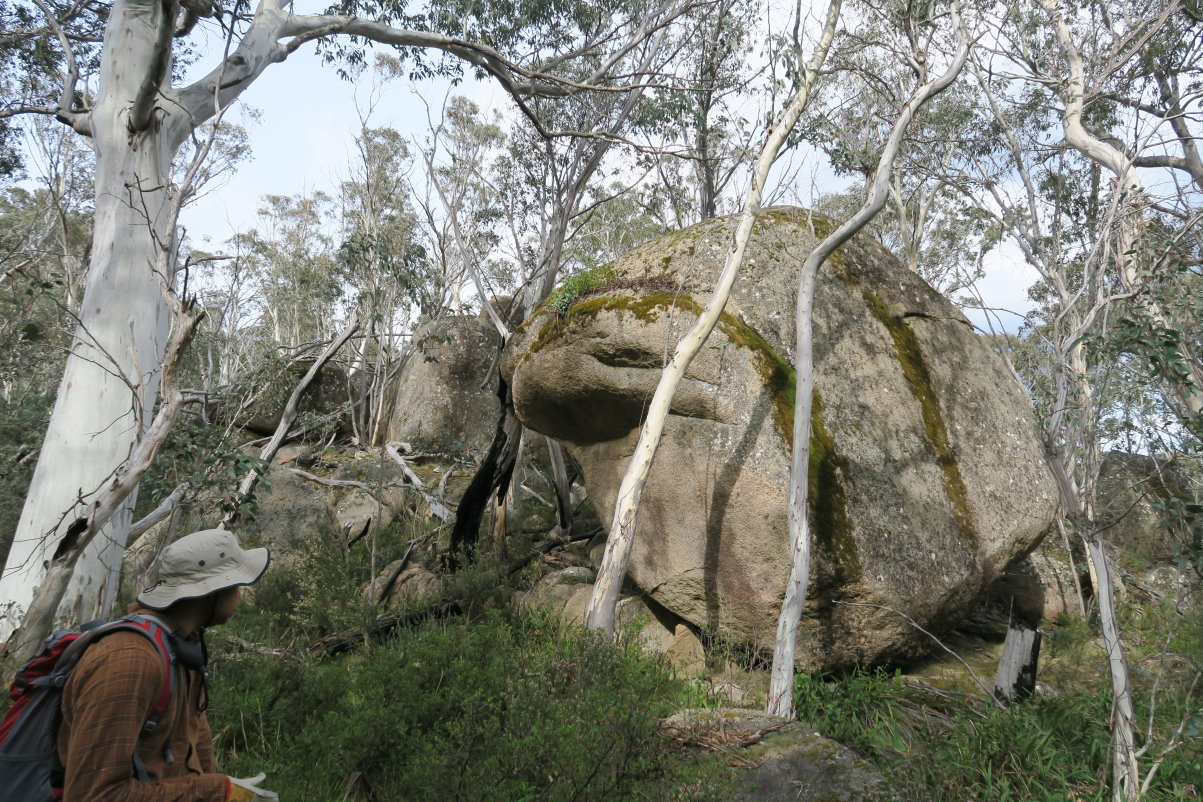 9)  10.8 km, 4 hrs after we started walking ~~~
We are due east of Mt Namadgi - red arrow in the pic. However we won't climb Mt Namadgi yet. We'll keep going north-west to Big Creamy Flats. 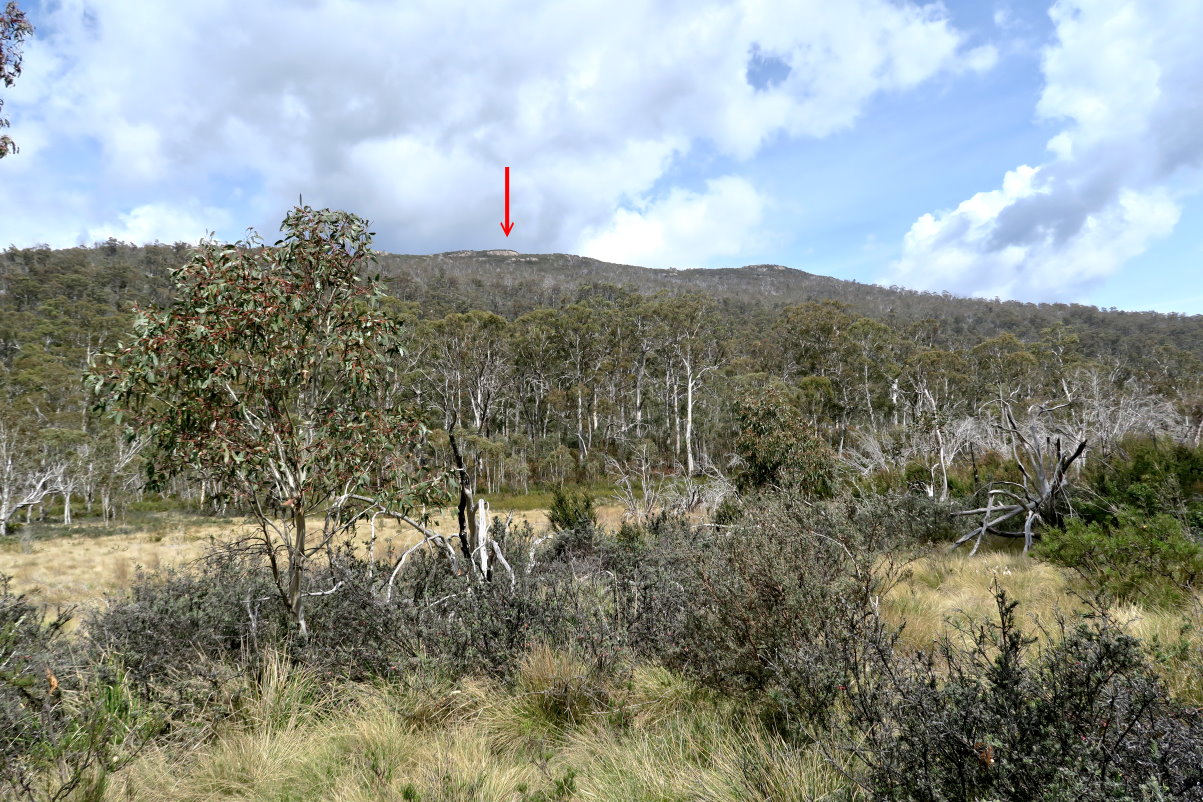 10)  Now at Big Creamy Flats ~~~
Mt Namadgi is not in this pic. It is just outside the left edge of the pic. 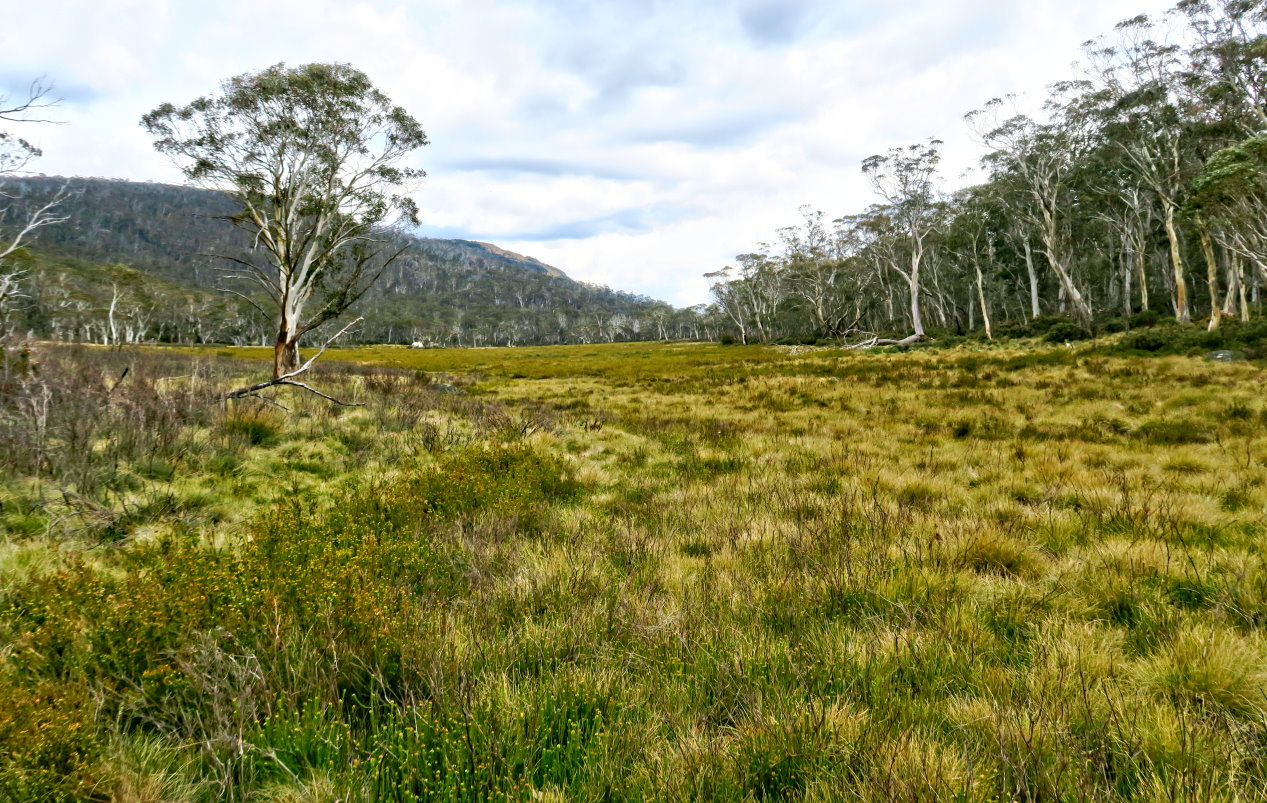 11)  Mt Namadgi from Big Creamy Flats ~~~
We are at the north-east side of Mt Namadgi. The summit can't be seen yet. In the pic, it is behind the rocky cliff at the top of the ridge.
We won't be climbing Mt Namadgi from here. We'll keep going in the north-west direction along Big Creamy Flats until we are almost north of Mt Namadgi. Then we'll climb straight up towards the rocky cliff, left yellow arrow. (Some people climb towards the saddle point, right yellow arrow; then walk along the ridge to the summit.) 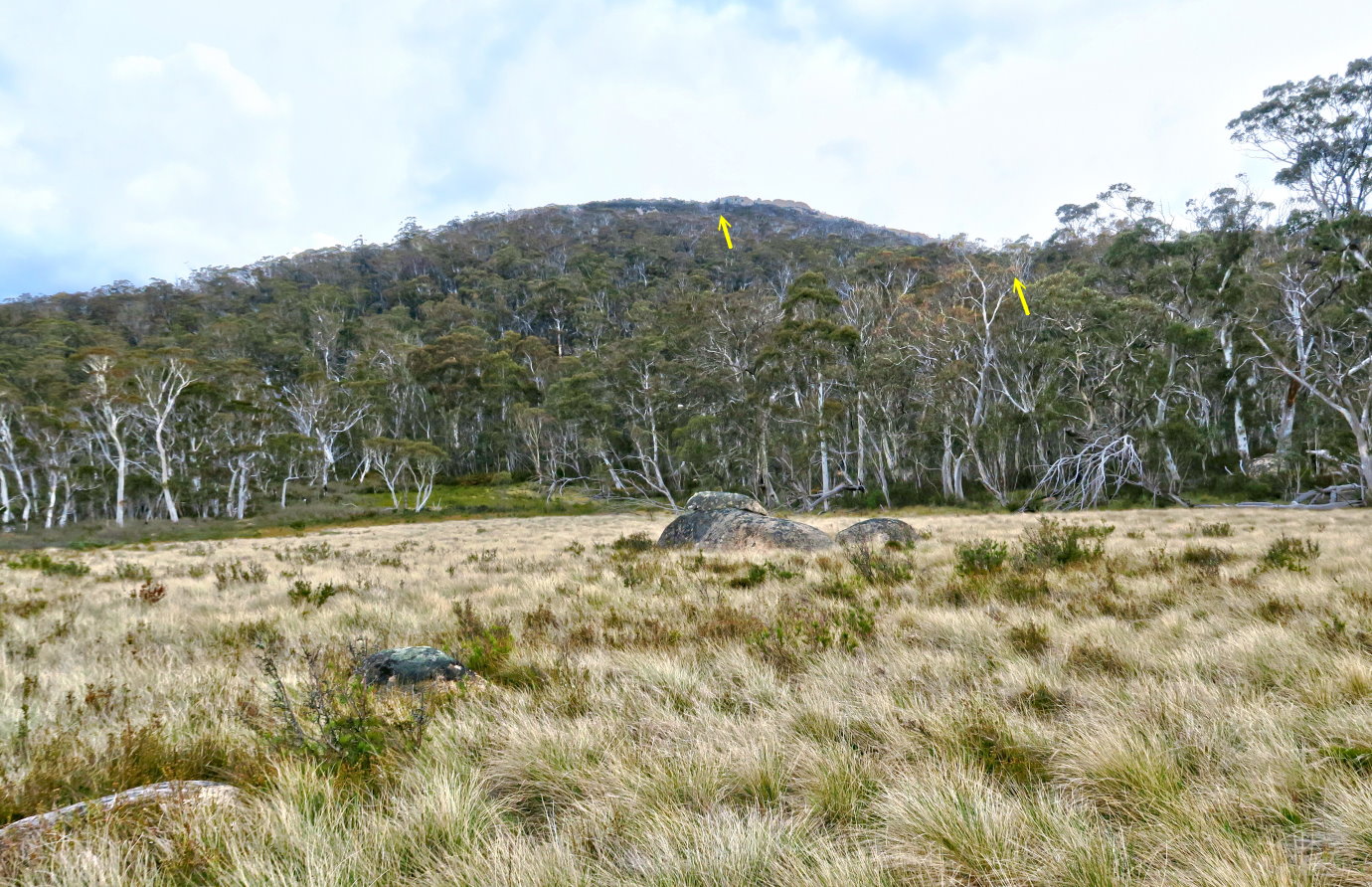 12)  Still at Big Creamy Flat, looking directly east at the 3 peaks of Mt Mavis. (The summit is the peak on the right.) At this point, I realize I have to ditch my grandiose plan of climbing Mt Mavis after climbing Mt Namadgi ... it is already past 12 o'clock (more than 6 hrs of walking) and we have yet to climb Mt Namadgi ! 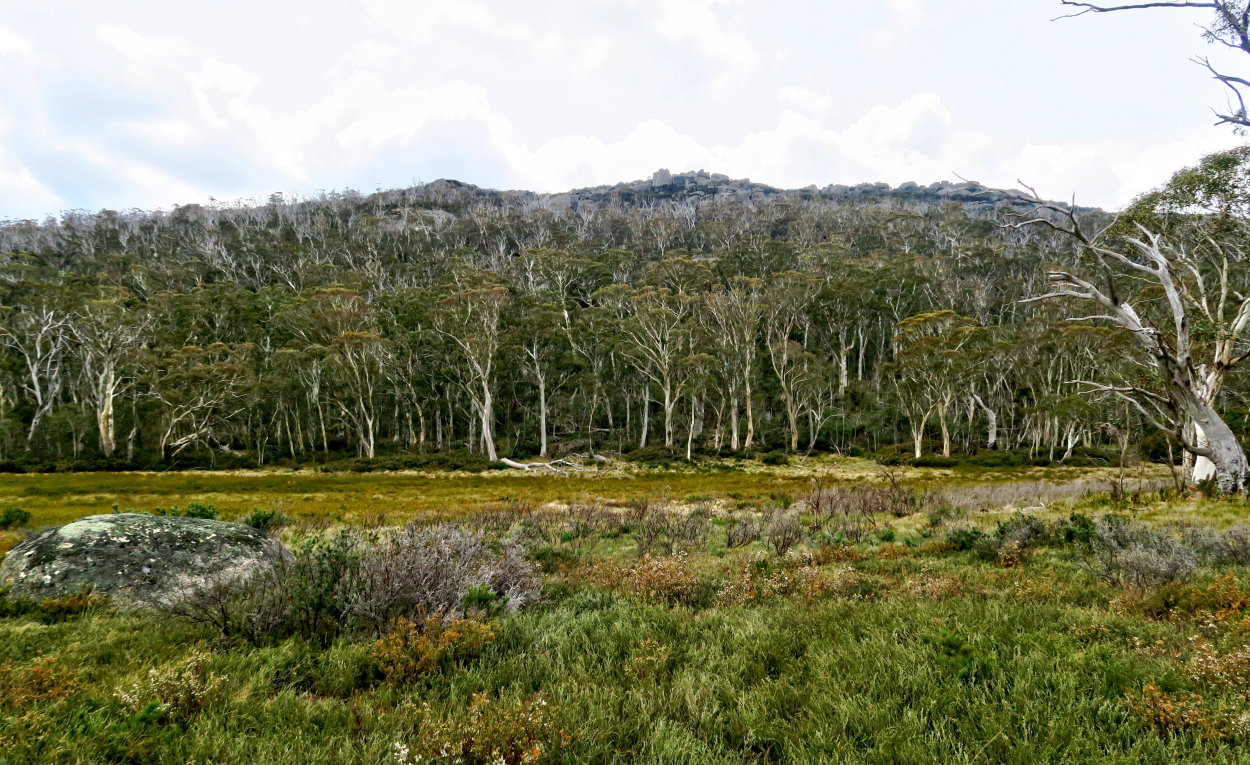 At 12:30pm, we have lunch by the edge of Big Creamy Flats. Afterwards, it is straight up towards the summit. 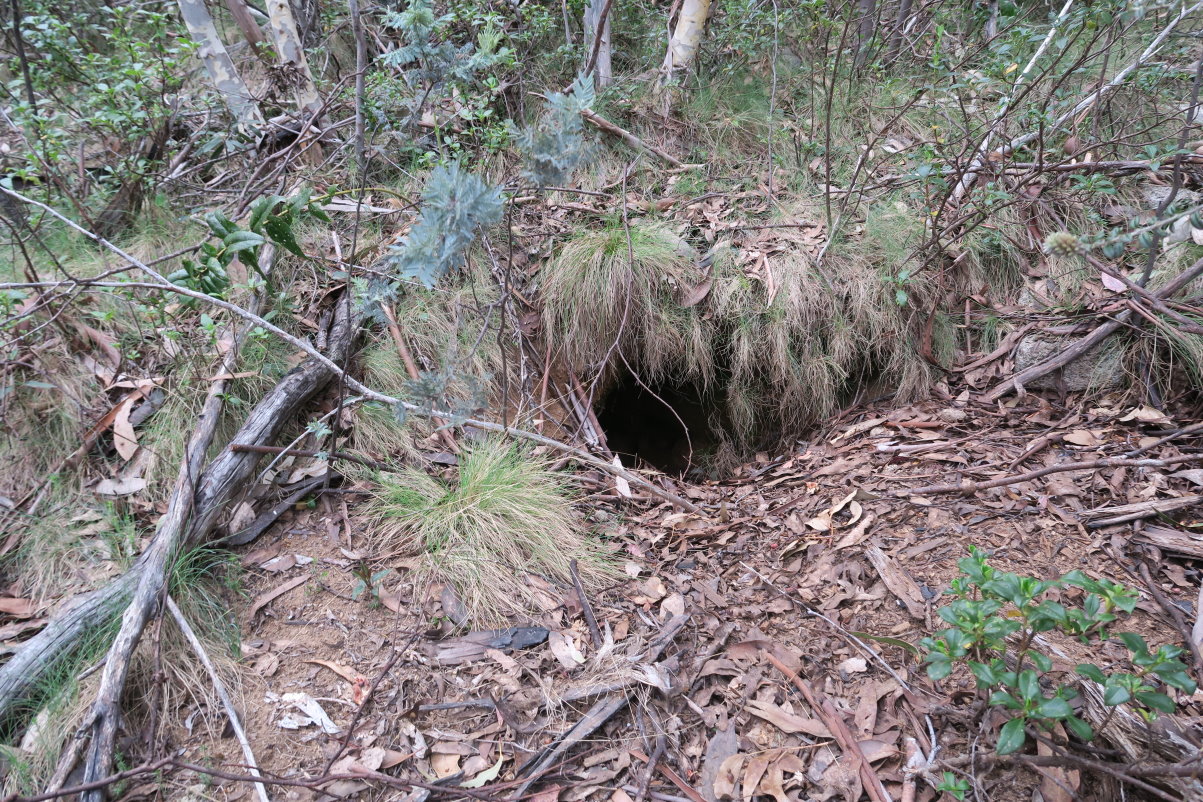 14)  BR climbing up a rock face - we are half way up the slope of Mt Namadgi. 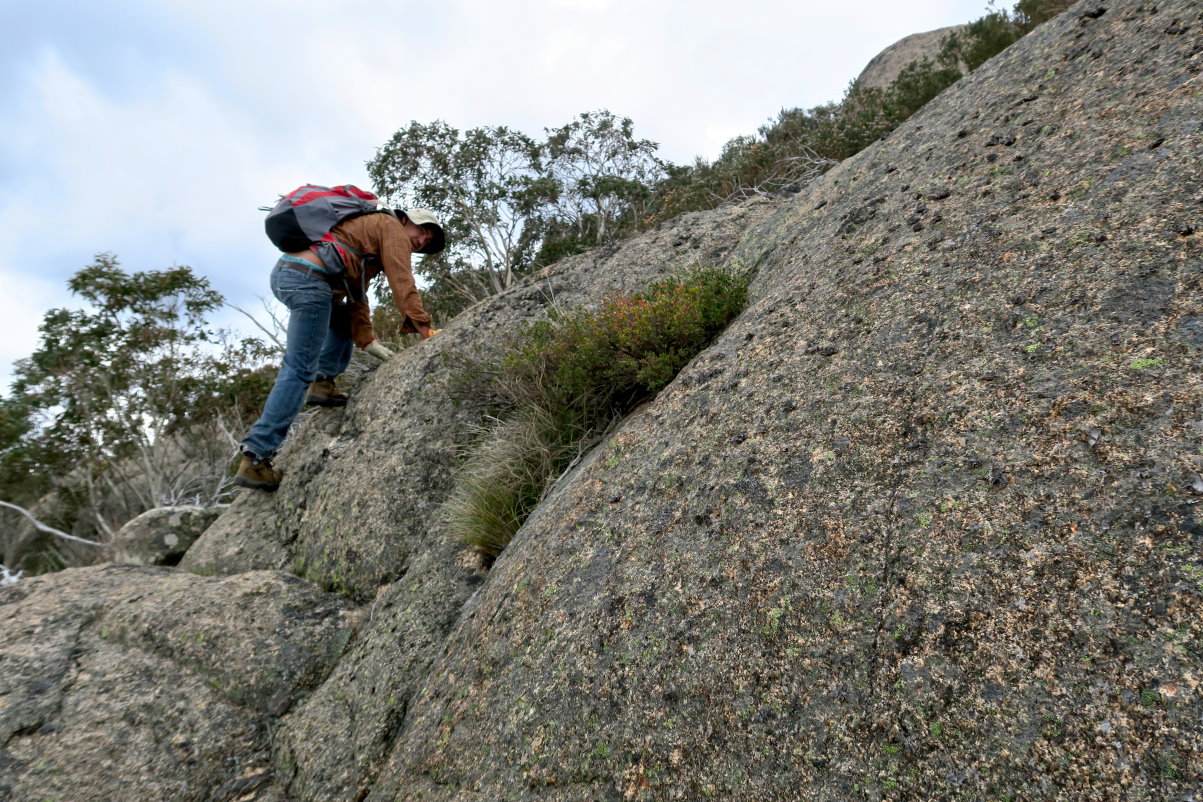 15)  These are the rock cliffs that is at the top of the mountain in Photo #11. The Namadgi summit, which can't be seen here, is another 500 meters behind the cliff.
We'll climb up the rock cliff through the crack pointed by the yellow arrows. 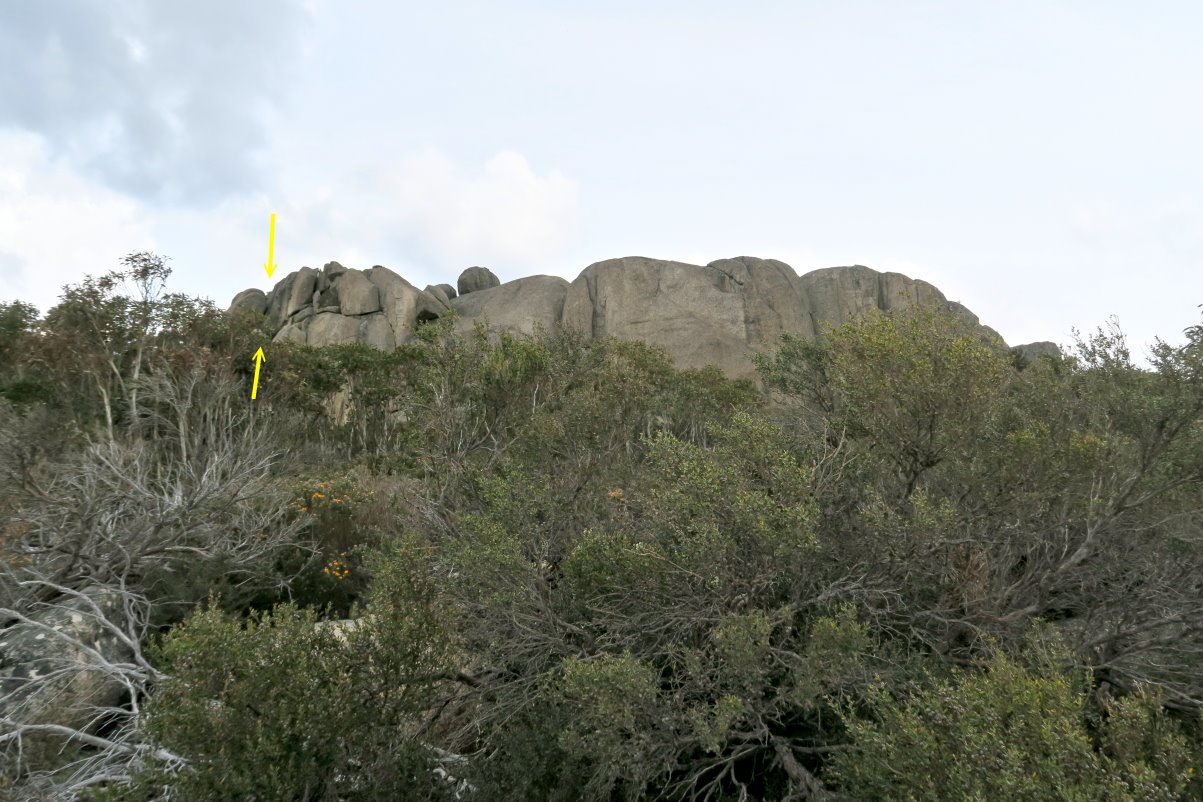 16)  (This pic is taken at the same spot as the previous pic was taken.)
- Big Creamy Flats can be seen below.
- The red arrow points to Mt Mavis summit. (Click on the image to enlarge it.)

17)  After we climbed over the rock cliff in Photo #15, we can see the summit - top of the rock in the middle of this pic. 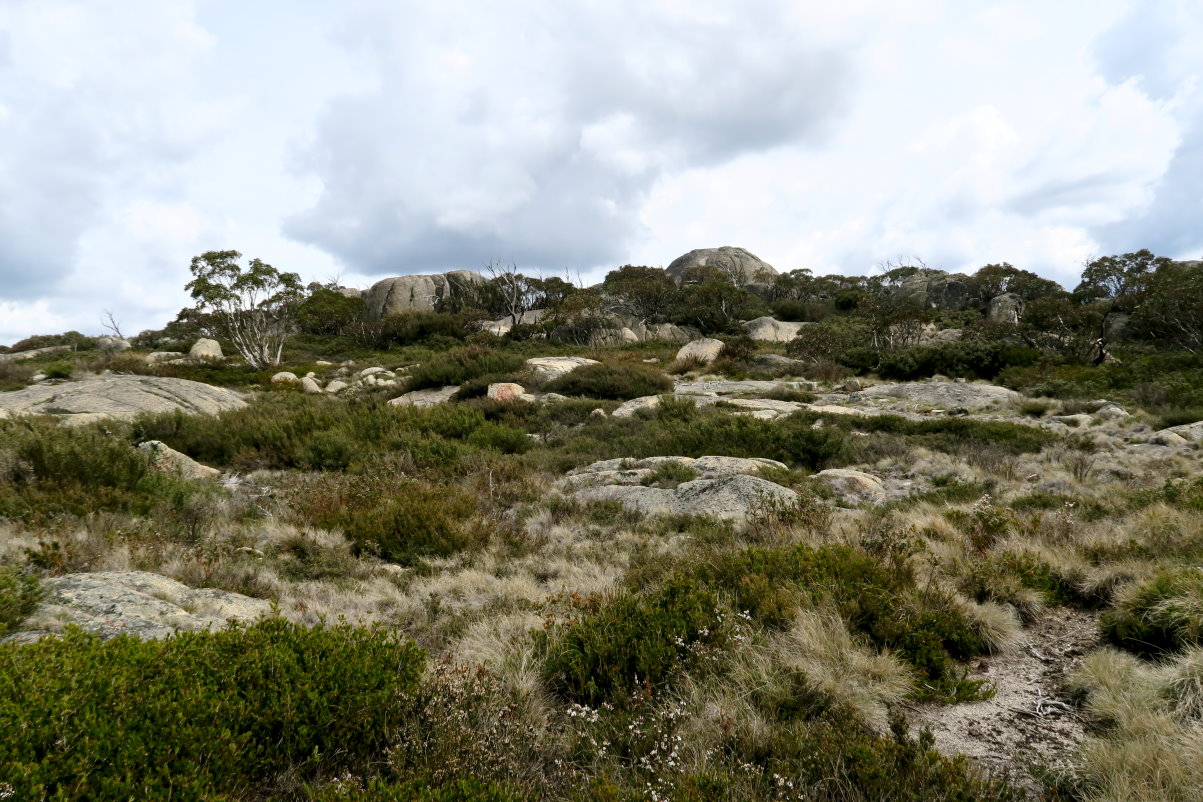 18)  Hurray! At Mt Namadgi summit 1791 meters, 14.4 km, 8 hrs 40 minutes after we started from Yankee Hat carpark. Hhmmm ... we now realize a large chunk of the return trip will be bushbashing in the dark !
My thumb is pointing at Mt Kelly. 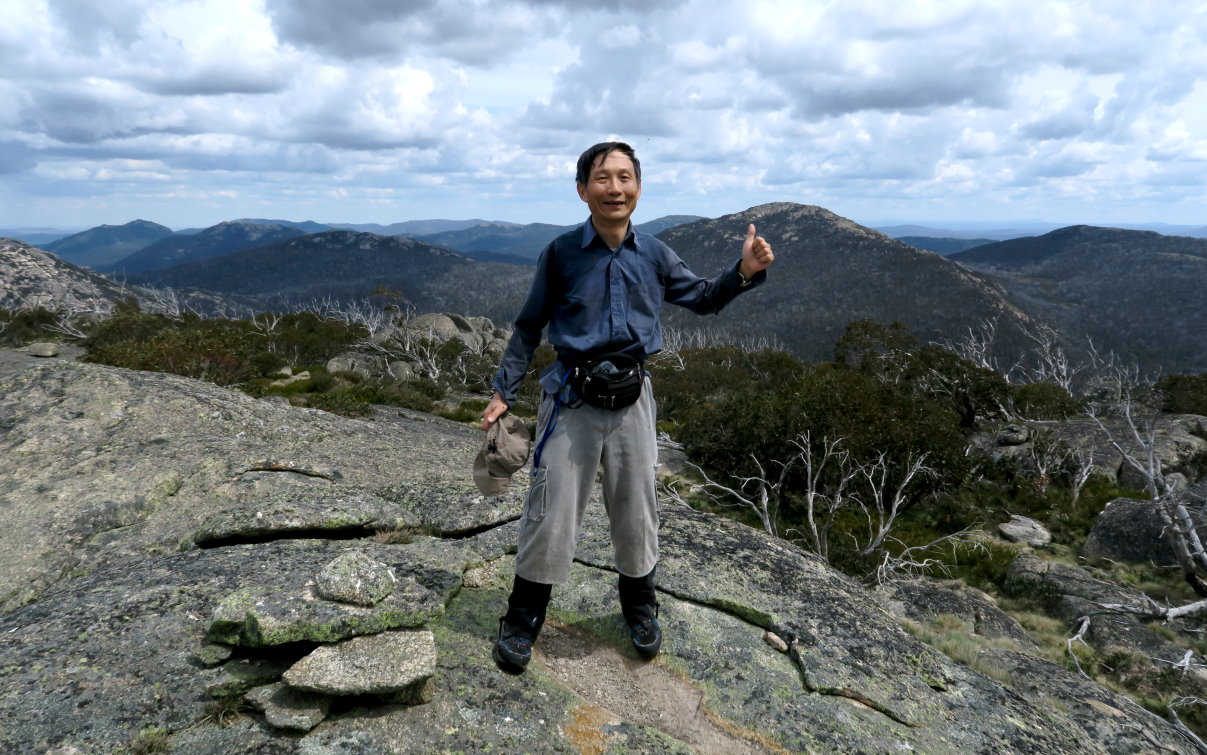 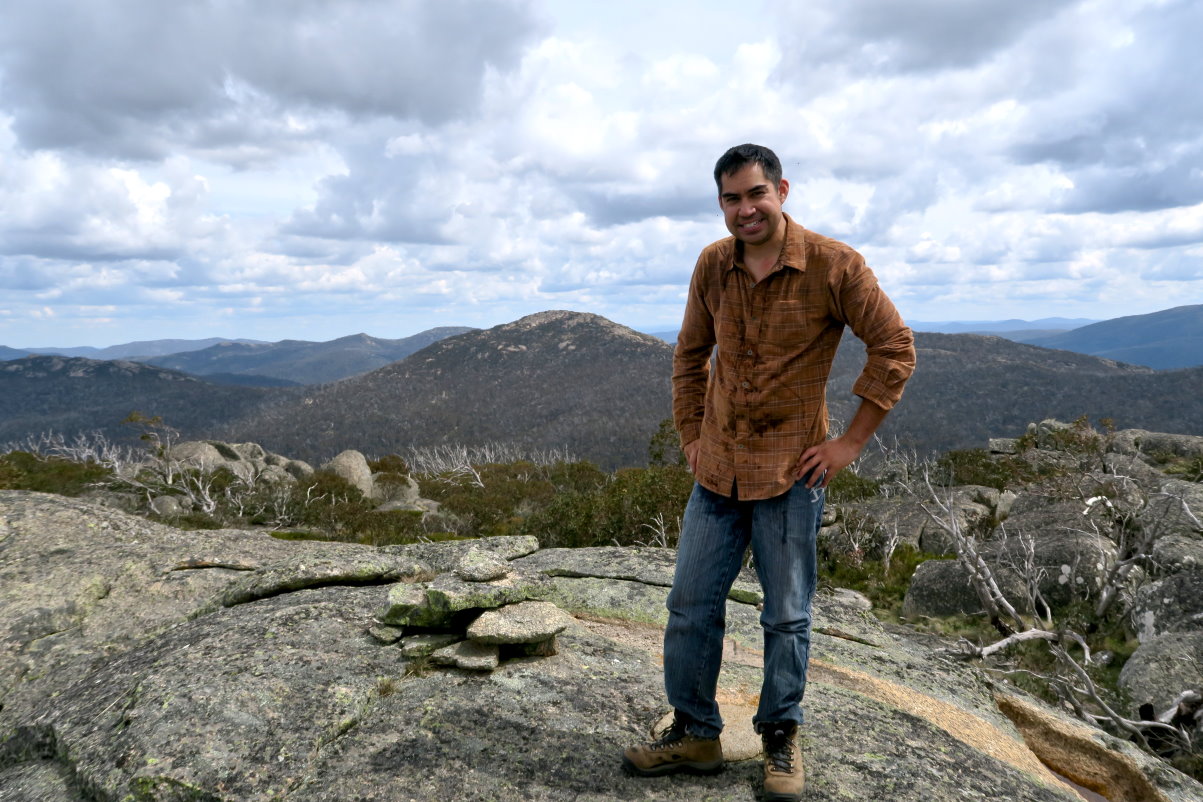 Photos and an account of my climb to Mt Kelly & Mt Burbidge are in my blog:
http://mntviews.blogspot.com.au/2015/01/kelly-burbidge-nsw-australia.html

Photos and an account of my climb to Bimberi Peak are in my blog:
http://mntviews.blogspot.com.au/2011/01/bimberi-act-australia-east-approach.html

After 10 minutes at the summit to soak up the atmosphere, we look at the watch and it is 2:41 pm !!! It sinked on us then that we'll be bushbashing a large part of the return trip in the dark ... Well, we started at 5:52am, almost 9 hours ago; the return trip won't be much easier. In addition, my GPS battery is running low ... well, I hadn't catered for such a long day   :-(

Fortunately BR has a good sense of direction.  So I turned off my GPS and let BR guide us back to the car at Yankee Hat Carpark.

- The kangaroos were in plague proportion in ACT. On the way back to Canberra from Yankee Hat carpark (where we started the walk), kangaroos jumped in front of my car on 3 occasions. Fortunately I had the foresight to drive at 50 kph in a 100 kph zone and was able to stop the car in time. Had I bump into one of roos at full speed and badly damage the car, I don't think I can get any help as there was no mobile phone connection in that remote part of ACT.