In 2014 April, I climbed Kosciuszko, Townsend & Twynam - the 3 highest peaks in Australia all in one day.  Photos and write up of the climb are in:
http://mntviews.blogspot.com.au/2014/04/kosciuszko-townsend-twynam-carruthers.html

Ricky and I are on a mission to climb the highest peak of every State and Territories in Australia, called State-8 peaks. Scroll forward to the Appendix section for links to the trip reports on these 8 peaks.

By the way, I have compiled a list of all peaks in Australia above 2000 meters, called Paul Ma's A2K peaks. The list and the rankings of the peaks are in this website:
http://mntviews.blogspot.com.au/p/paul-mas-a2k-peaks.html

Here is a little known fact ... Mt Townsend was once thought to be the highest mountain in Australia. At the time, it was called Mt Kosciuszko; and Kosciuszko was called Townsend. Later on, when more accurate measurement was made, rather than trying to re-educate the public on the real highest mountain, the NSW Lands Department decided it was easier to simply swap the names instead!!! How interesting!!!

And because Mt Townsend is only a little lower than Mt Kosciuszko, there is a tradition that all hikers who climb Mt Townsend should bring a rock from the bottom and add it to the top, thus restoring it to its former glory as the highest mountain in Australia!!! ... more on this later.

You should be able to find some contour maps on the internet too. For example, from:
http://www.johnevans.id.au/Pages/Walk%20Descriptions/2010_02_26-28.html

Although it is a sunny day with no clouds, it is quite cool, about 10 degrees Celsius. I only drink about 2 litres of water.

At 6:15am, Ricky and I start our hike from Dead Horse Gap carpark which is about 4.5 km west of Thredbo. The carpark is on the south side of the Alpine Way.

You know you've parked the car in the right place if you can see a locked trail heading southward with a sign saying "Cascade Trail". However, this is not the trail you want to walk on. Rather, you should cross the road, then you will see a sign saying "Australian Alps Walking Track". Follow it for about a minute and it will cross the Threbo River. Once you are over the river, there should be another sign pointing to Dead Horse Gap Track.

The Dead Horse Gap Track is a well defined and well trodden trail. You start off in a forest of snow gums. As you climb higher, you pass a distinct boundary where the snow gums disappear and only alpine grass are left to grow.

4.3 km later, we arrive at the junction of Kosciuszko Walk trail.

Almost the entire Kosciuszko Walk trail is a metal mesh walkway raised above the ground to allow creatures/grass to crawl/grow underneath it. It is fun to walk on it - you can feel the vibration of other hikers walking many many paces away ... well, I find it interesting.

The trail passes through the headwaters of Snowy River. There is no specific spot where the Snowy River rises. Many small creeks come together to form larger creeks, and the larger creeks join together to form the Snowy River. There are tiny native fish called Mountain Galaxias swimming in the creeks. They are supposed to be able to climb out of the water to sun themselves on the rocks. But we don't notice any on this trip.

The mesh walkway goes all the way to Rawson Pass. On its way there, you get a good view of Lake Cootapatamba, Australia's highest named lake.

Rawson Pass is a good place to take a rest. It has toilet facilities. In fact, Australia's highest dunny is here, opened in 2007, so it is quite new. This is also where the mesh walkway gives way to an unsealed road. Cars used to be able to drive from Charlotte Pass to Rawson Pass, then to the Kosciuszko Summit ... not any more. The entire road is now reserved for hikers only.

We are at the summit at 9:20am. There is no one there at the time, but I am sure someone would have been there earlier ... because it is quite popular to climb up here in the early mornings in the dark so as to watch the sunrise from the roof of Australia.

Well, Ricky and I have now climbed the highest peaks together in the 5 eastern States/Territories ... Qld's Bartle Frere last year, ACT's Bimberi this Jan, Tas' Ossa in Feb, Vic's Bogong in March, and now NSW's Kosciuszko. Current plan is the climb NT, SA and WA's highest mountains sometime next year.

Naturally one gets a fantastic 360 degree view from the summit. In particular, to the north, Muellers Peak and Mt Townsend now beckon us to climb them. Mt Townsend is a cragy peak more majestic than the gentle round dome of Kosciuszko. No wonder in the past Mt Townsend was thought to be higher than Kosciuszko.

After a mandatory photo session, it is down the summit for 1 km to meet up with the Main Range Track; and we are on our way to Muellers Peak.

The Main Range Track doesn't go through the summit of Muellers Peak. Instead, it skirts its eastern flank. At the point of closes approach, we get off the track and head directly towards the peak. You won't be disappointed when you get to the top. There is a marvellous view of beautiful Albina Lake in blue, reflecting the colour of a perfectly cloudless sky!

It would have been so nice if we can stay there for a long while to enjoy the scene ... but we still have Mt Townsend to climb which is 2 km away towards the north-west. So it is down the peak and make a direct beeline for it. On the way, we meet up with a narrow foot track and follow it all the way to the base of Mt Townsend. The final 40 meters is an ascent on an almost vertical cliff made of loose rock boulders ... sounds challenging to climb, but it turns out to be not too difficult ... and soon we find ourselves at the top of Australia's 2nd highest mountain!

The view from Mt Townsend is impressive ...
•  There are the four peaks which make up the Abbott Range - Byatts Camp, Abbot Peak, Mt Townsend and Alice Rawson Peak. (I climbed them all in 2014 December. Photos and write up of that trip are in: http://mntviews.blogspot.com.au/2014/12/lee-northcote-clarke-abbott-range.html
•  There is the steep drop into the valley to the West.
•  To the south is a broad vista across Wilkinsons Valley onto the north face of Mt Kosciuszko. We can see hikers as tiny ants at the Kosciuszko summit. We are tempted to shout to them to come over and join us at Mt Townsend.

The day is perfect ... blue sky, hardly any wind. We enjoy our lunch here at the top.

Apart from Ricky almost stepping on a deadly venomous Eastern Brown Snake when we were near our car, the return trip is uneventful. From Mt Townsend, we follow a foot track all the way to Muellers pass which is the saddle point between Muellers Peak and Mt Kosciuszko. For reasons I don't understand, this foot track is not marked on any of the contour maps.

1.) Start of the Dead Horse Gap Track - It is mostly uphill and it will join up with the Kosciuszko Walk trail 4.3 km later near Thredbo Top Station. 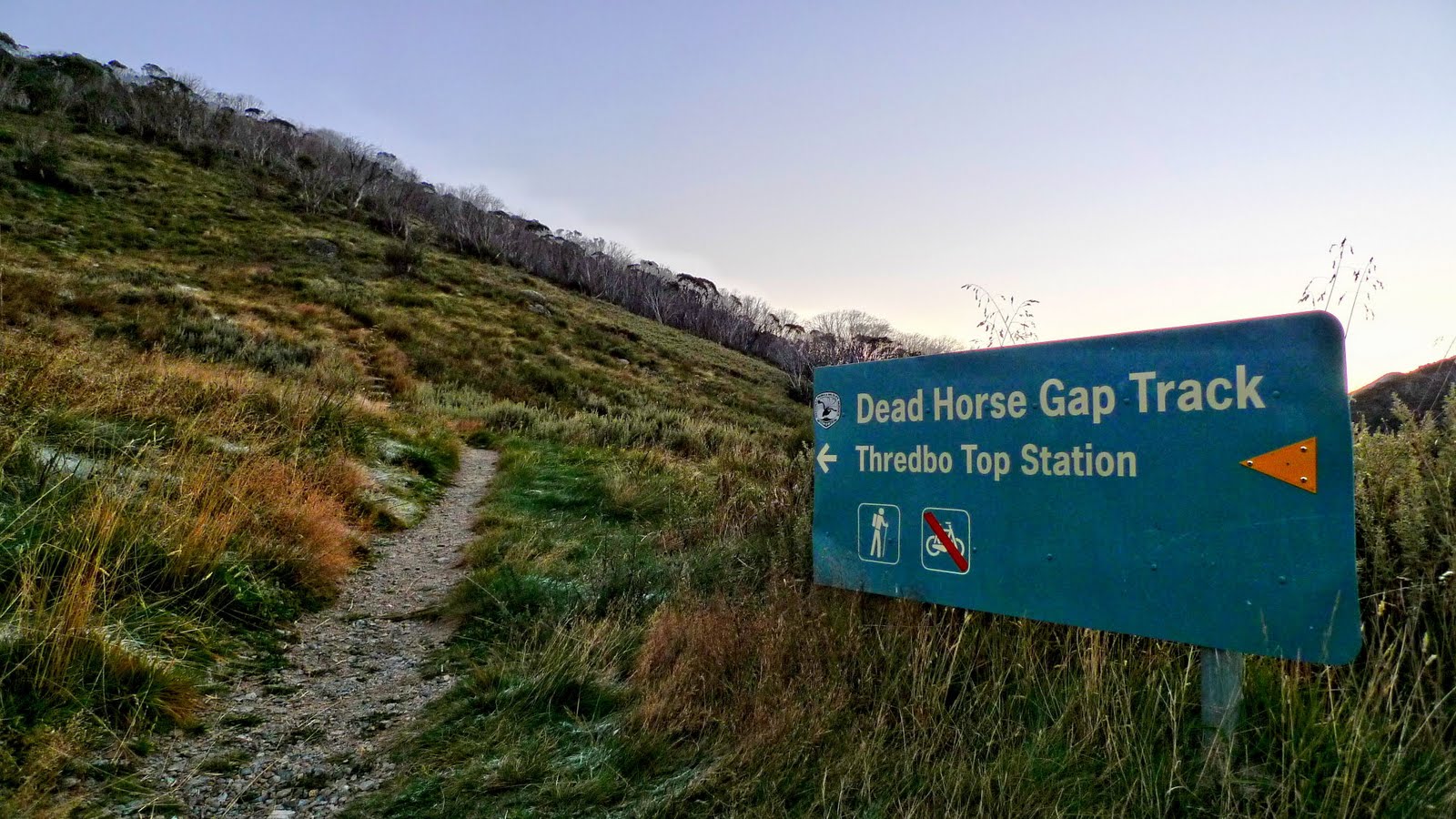 2.) The very small blue building slightly to the left of the centre of this pic is Thredbo Top Station (looks blue here, but it is actually gray). In winter, skiers take a chairlift, get off here, then ski down the valley. Not sure what is the purpose of the fences across the centre patch of this pic. Perhaps to warn skiers of the steep downhill cliff dipping into the valley? 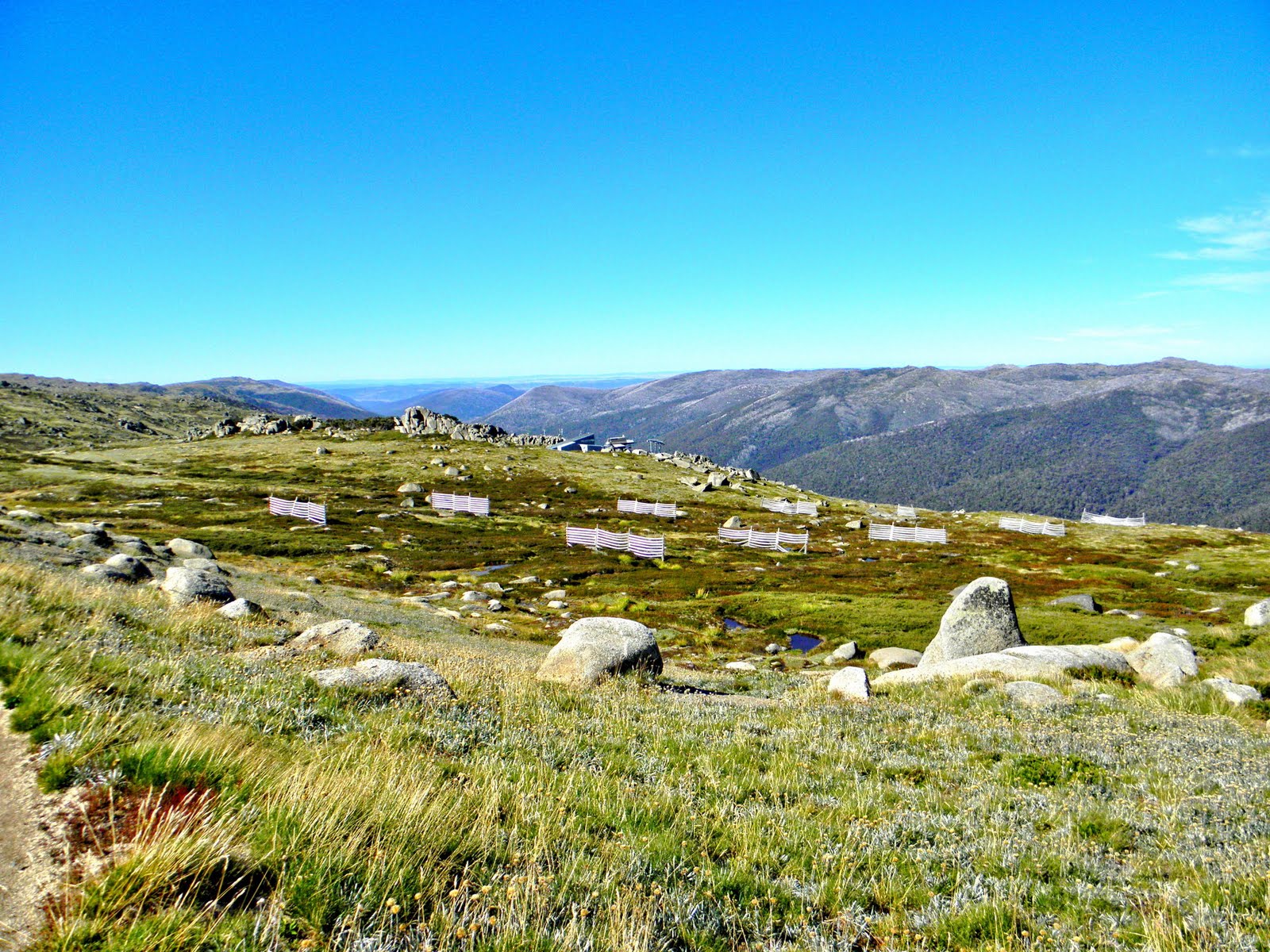 3.) Dead Horse Gap Track ends here. We will turn left onto the Kosciuszko Walk trail and head towards Mt Kosciuszko. Turn right is to Thedbo Top Station, the small blue building (looks blue here, but it is actually gray). Eagle Nest Restaurant is inside the Thredbo Top Station. Instead of the uphill hike on the Dead Horse Gap Track, we could have taken a chairlift to here too. Ah, but that is cheating, right? 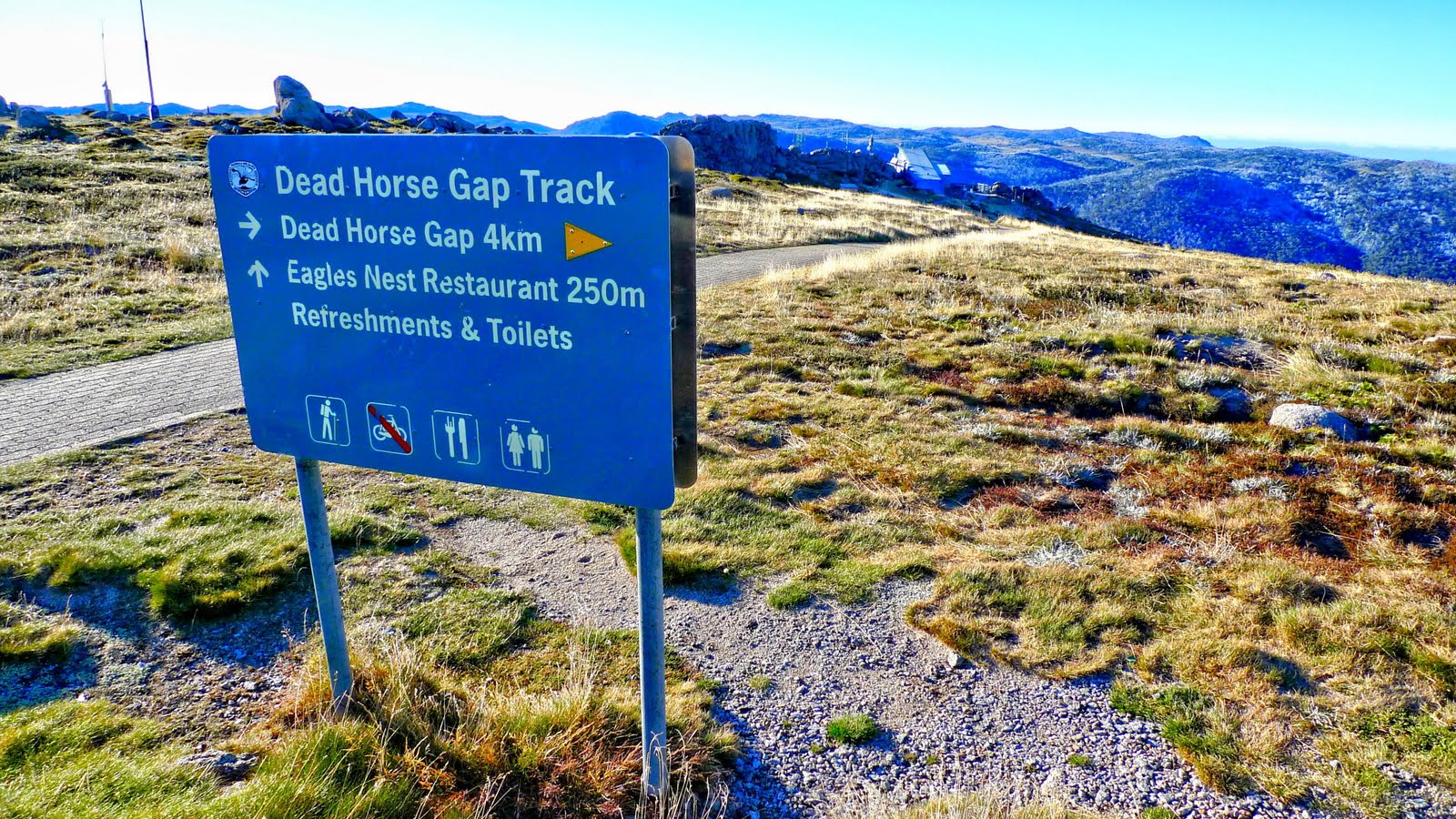 4.) Mt Kosciuszko summit is the gentle rounded dome in the centre of this pic. The metal mesh walkway goes all the way to its foot hill (Rawson Pass). The walkway is not galvanized, hence its rusty appearance ... because alpine plants have a low tolerance to zinc used in the galvanizing process. 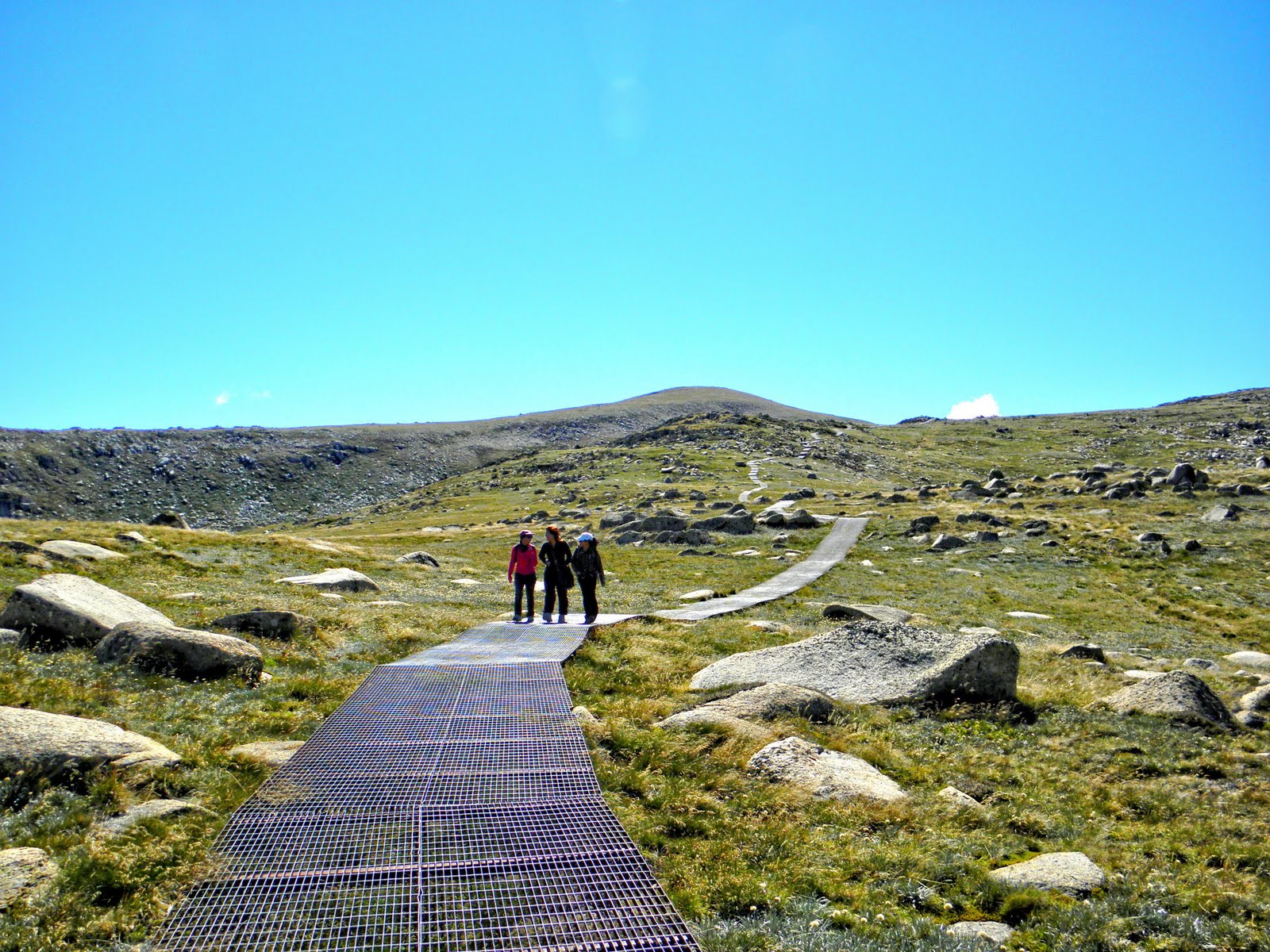 5.) On the way to the summit, we pass this beautifully blue lake called Lake Cootapatamba, the highest named lake in Australia. 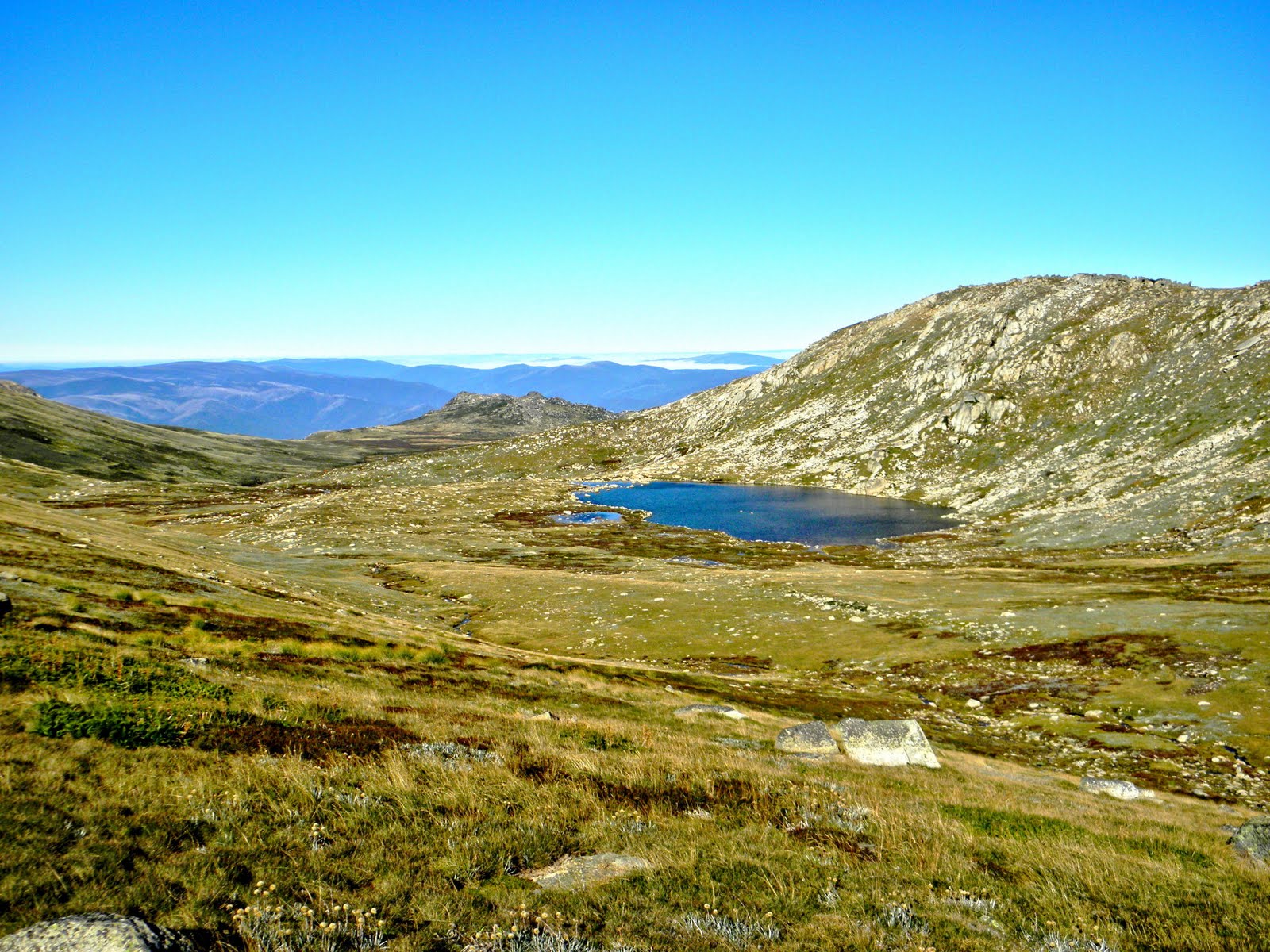 6.) This is Rawson Pass, right at the foothill of Kosciuszko summit. The trail coming from the right edge is the Kosciuszko Walk tail ... that is where we came from. The structure in the middle of this pic is the highest toilet in Australia. Well, if climbing high mountains is not your cup of tea, perhaps you maybe interested in visiting the highest dunny in Australia!!! 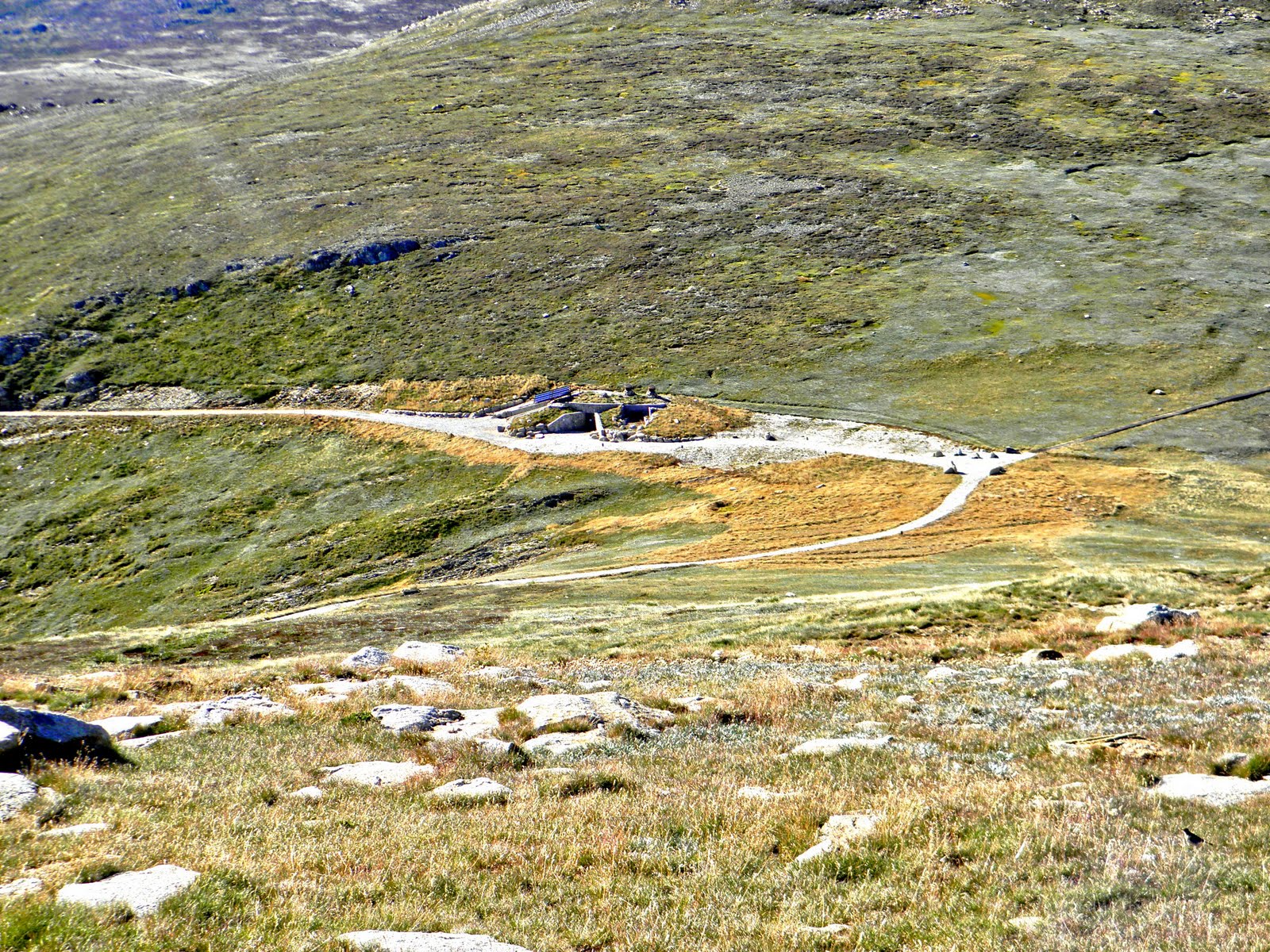 7.) The small figure near the right edge is me taking photos. (Click on the pic to enlarge it.)
You can see 3 trails here:
- The trail from the left edge is from Charlotte Pass, and ends at Rawson Pass which is slightly on the right of the centre of this pic.
- The trail to the bottom left corner is the Main Range Track and goes to other peaks in the Snowy Mountains. We will be on this trail later on to Muellers Peak and Mt Townsend.
- I am standing on a trail which goes to the right edge. It will lead to Mt Kosciuszko summit. This is where we are going now. 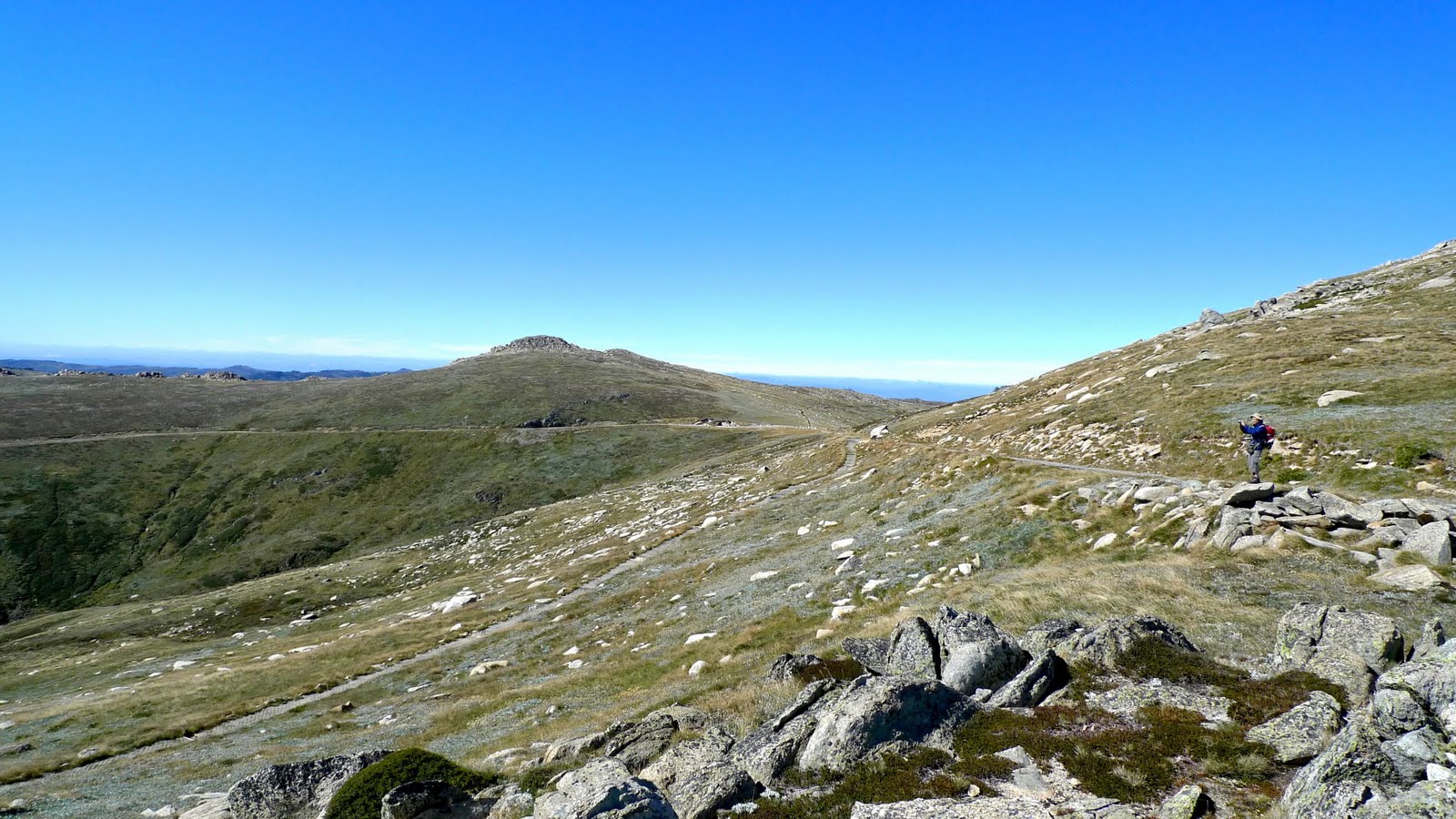 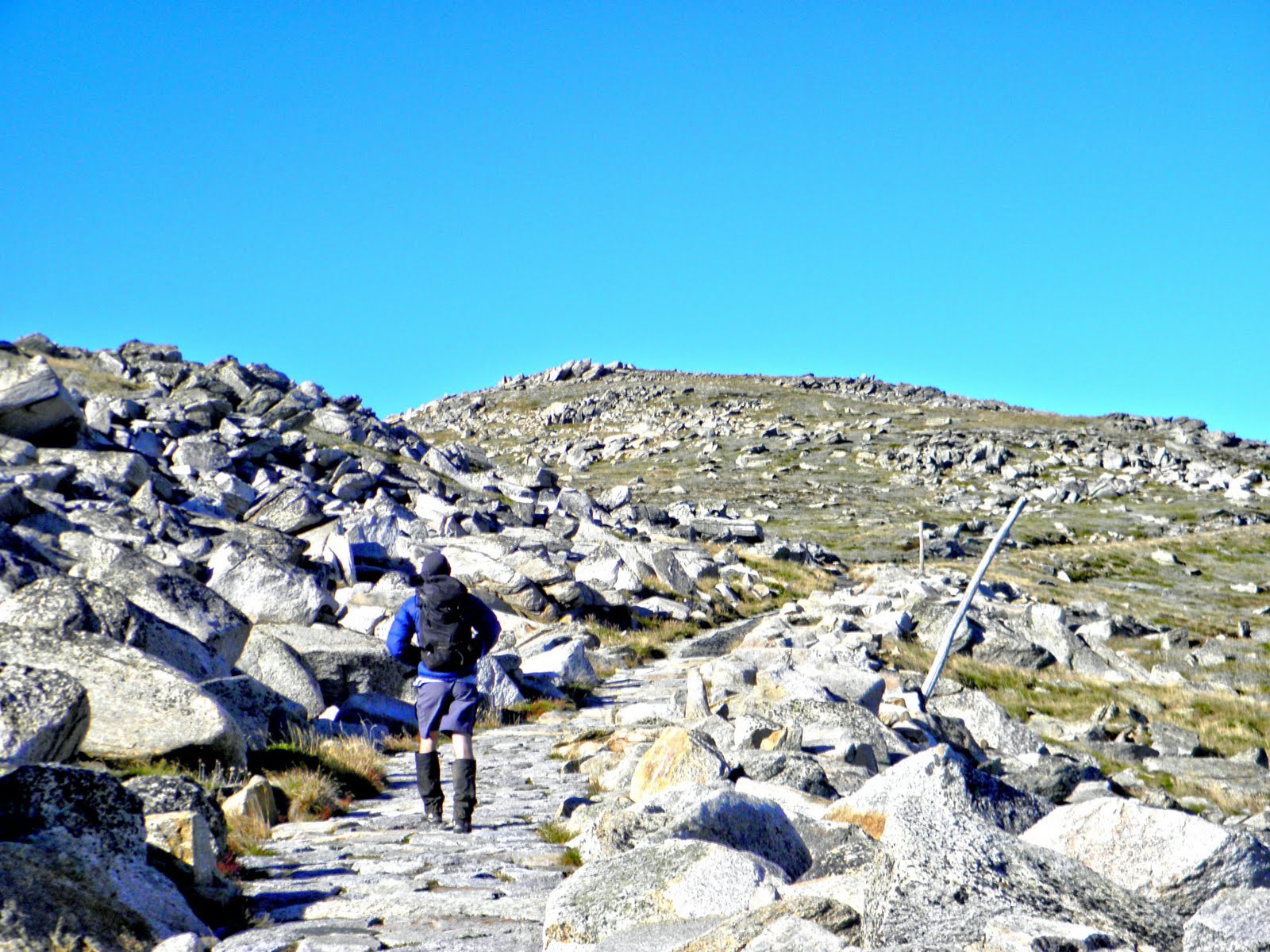 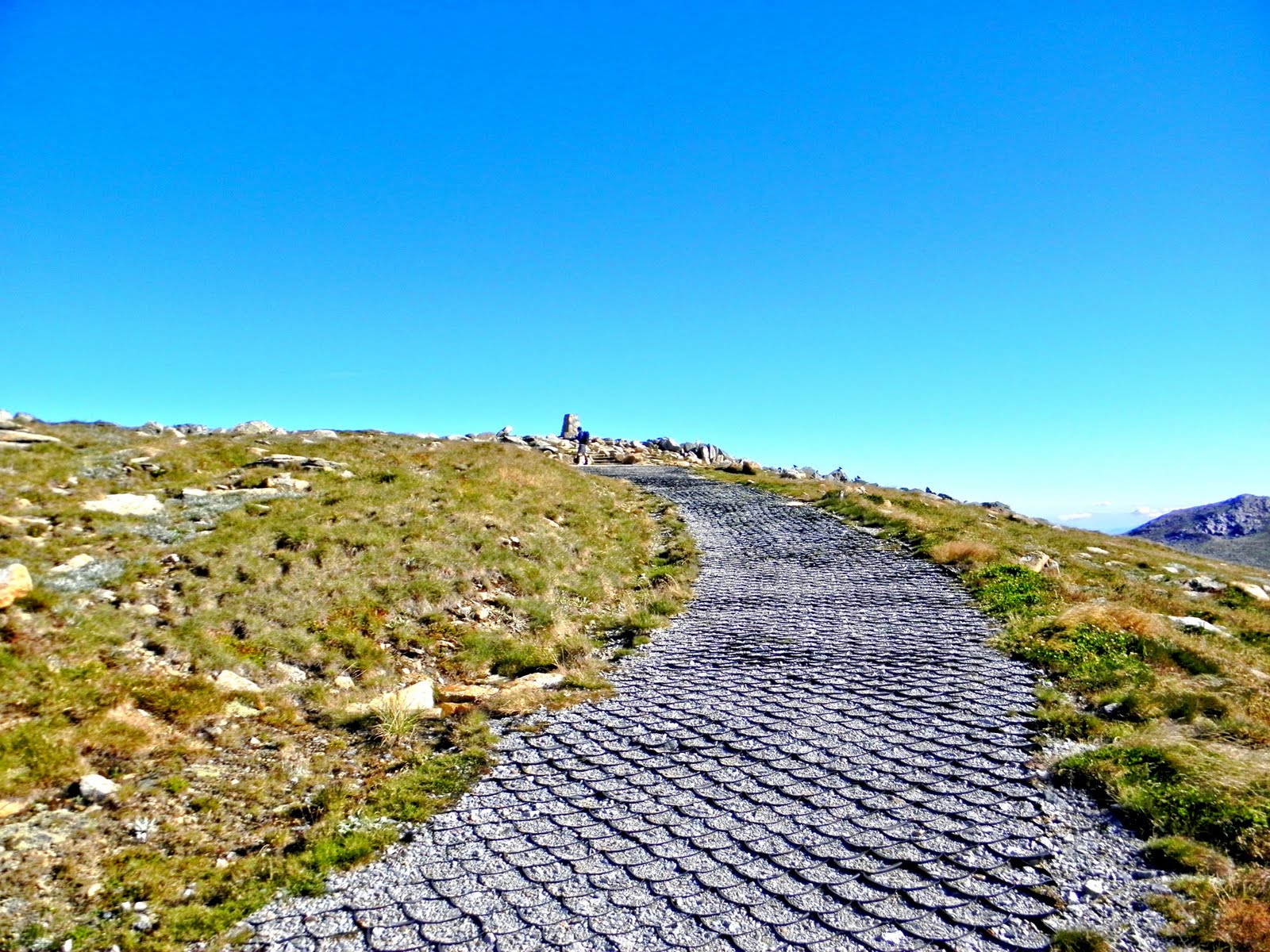 10.) Here it is, the Kosciuszko summit, 2228 meters, highest point in Australia!!! It took us 3 hrs to reach here from the start of Dead Horse Gap Track. 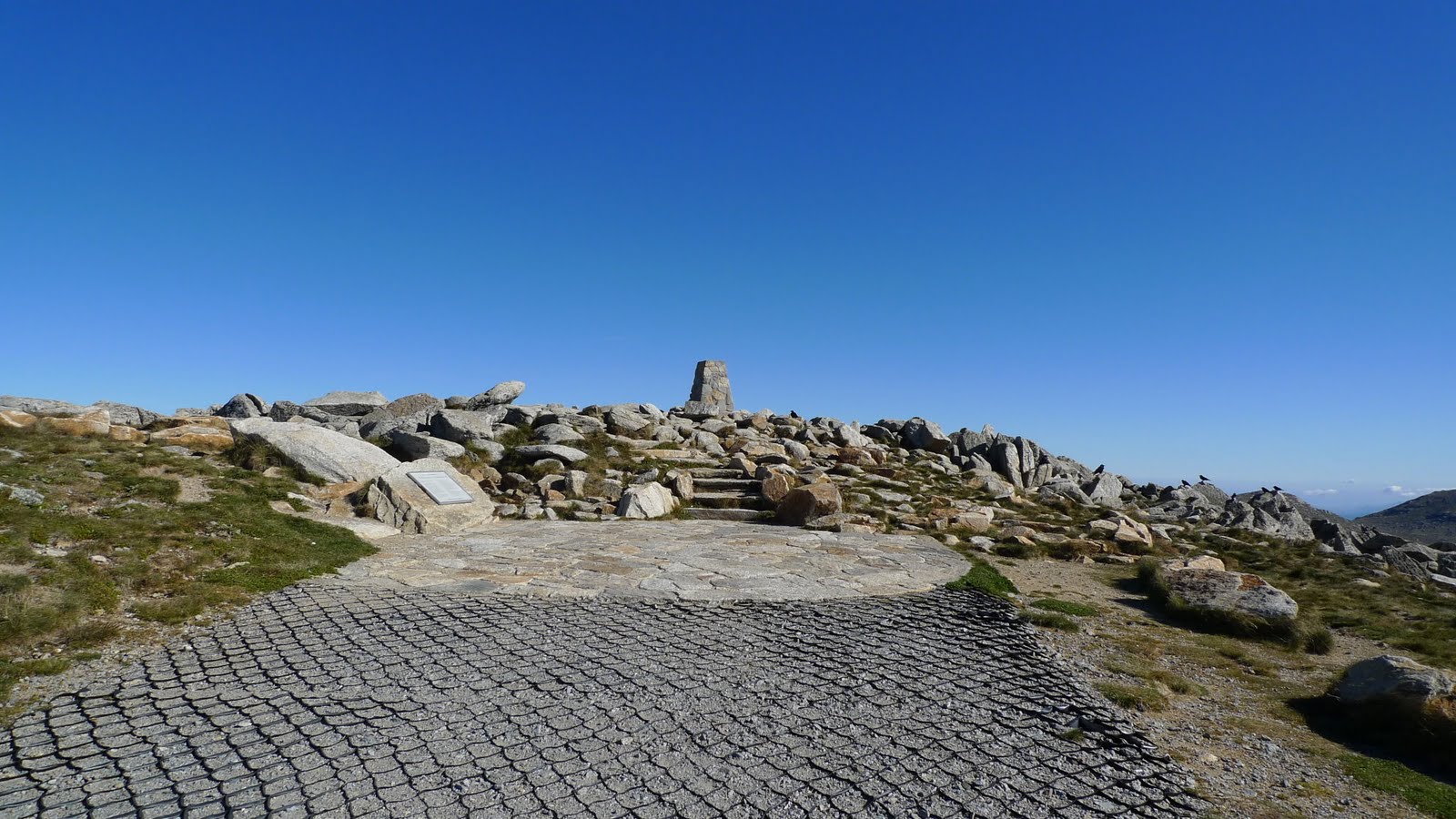 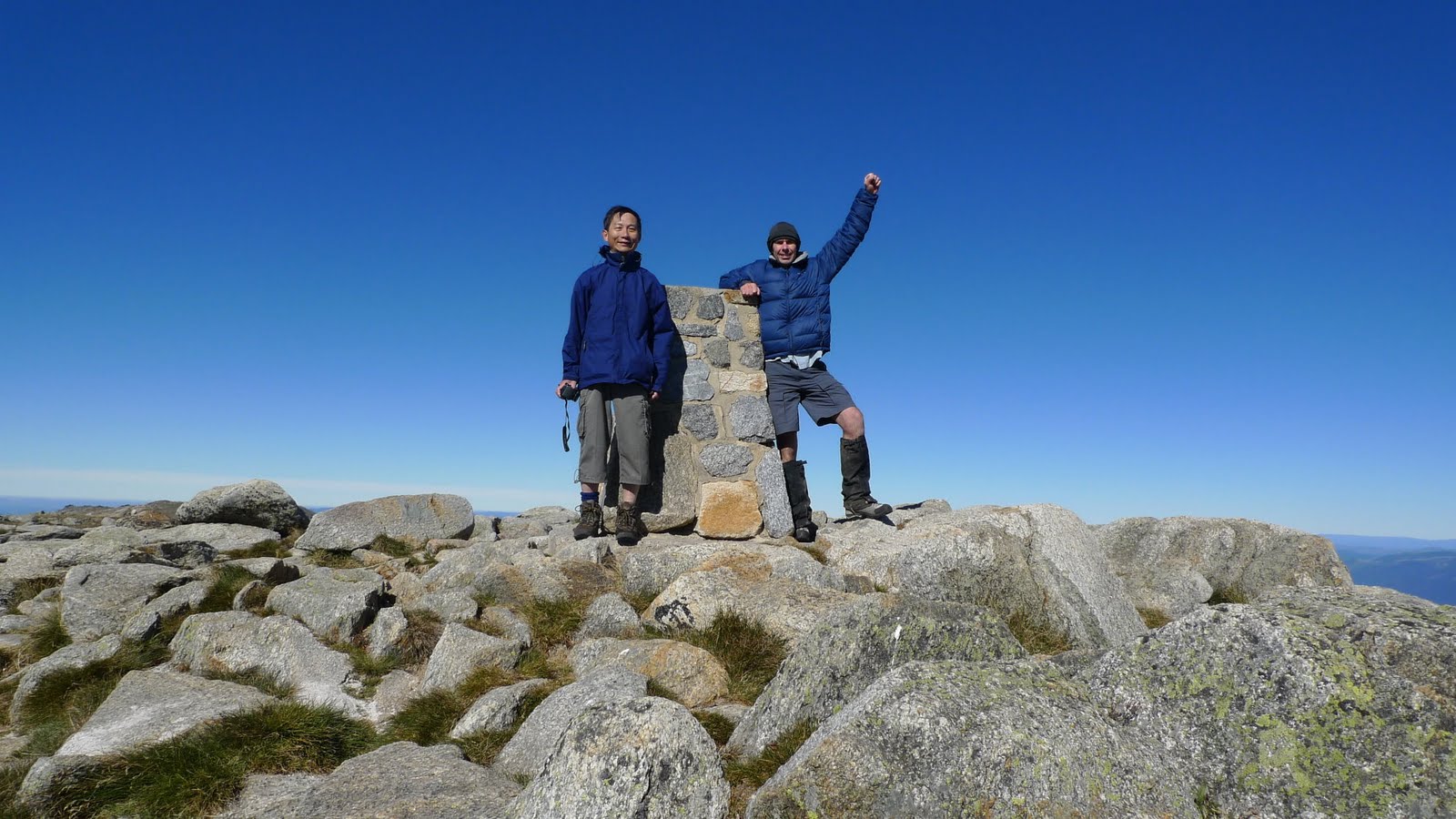 12.) From Kosciuszko summit, we can see:
- Muellers Peak, the pyramid shape mountain in the centre of this pic.
- Mt Townsend, 2nd peak from the left edge (the highest peak in this pic)
And we are going there!!! 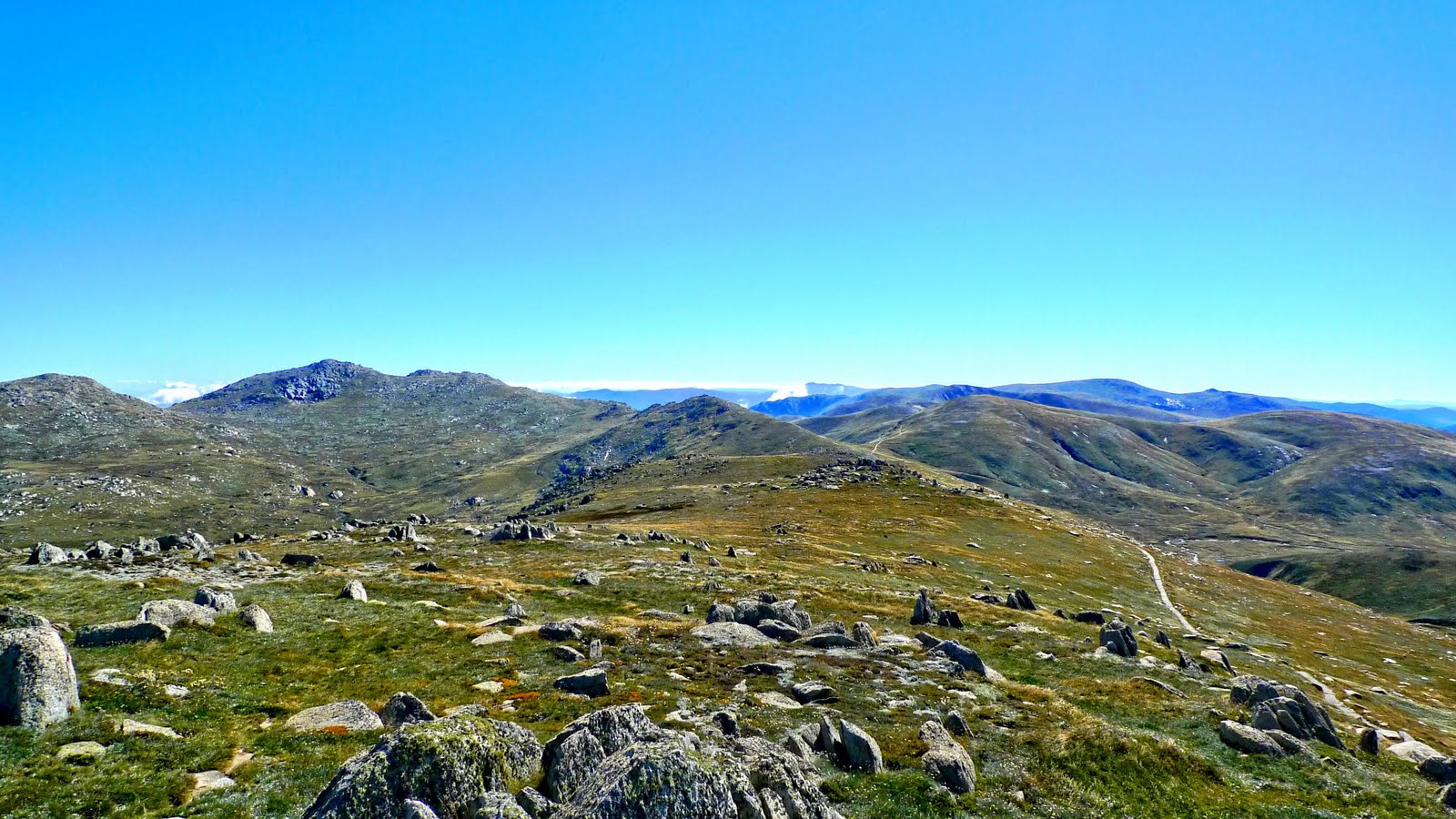 13.) We are now on the Main Range Track, on our way to Muellers Peak which is the pyramid shaped mountain just in front of us.
Mt Townsend is the high peak on its left. 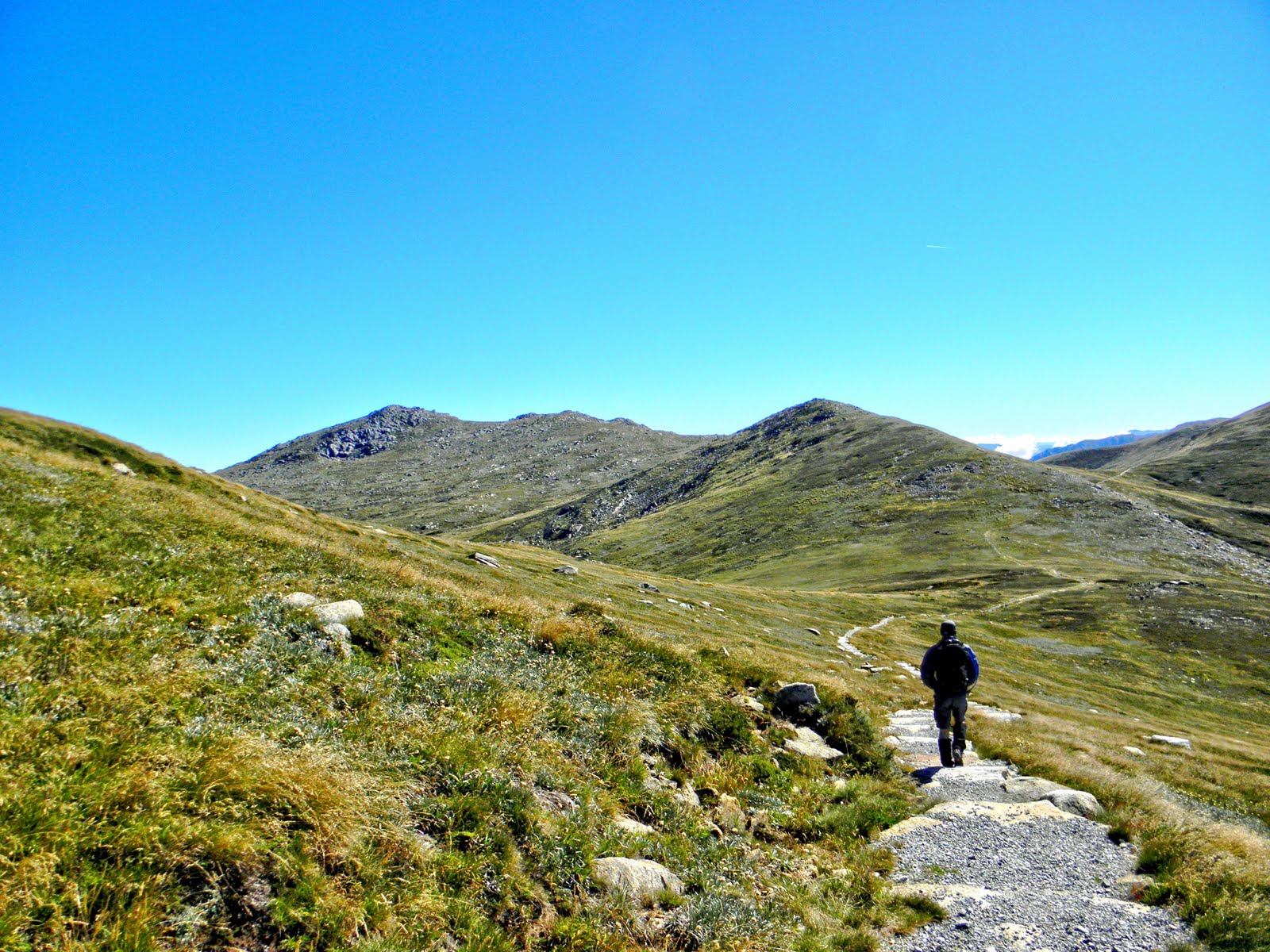 14.) Looking back ... the large round dome on the right is Mt Kosciuszko. The small figure in this pic is me climbing up Muellers Peak. 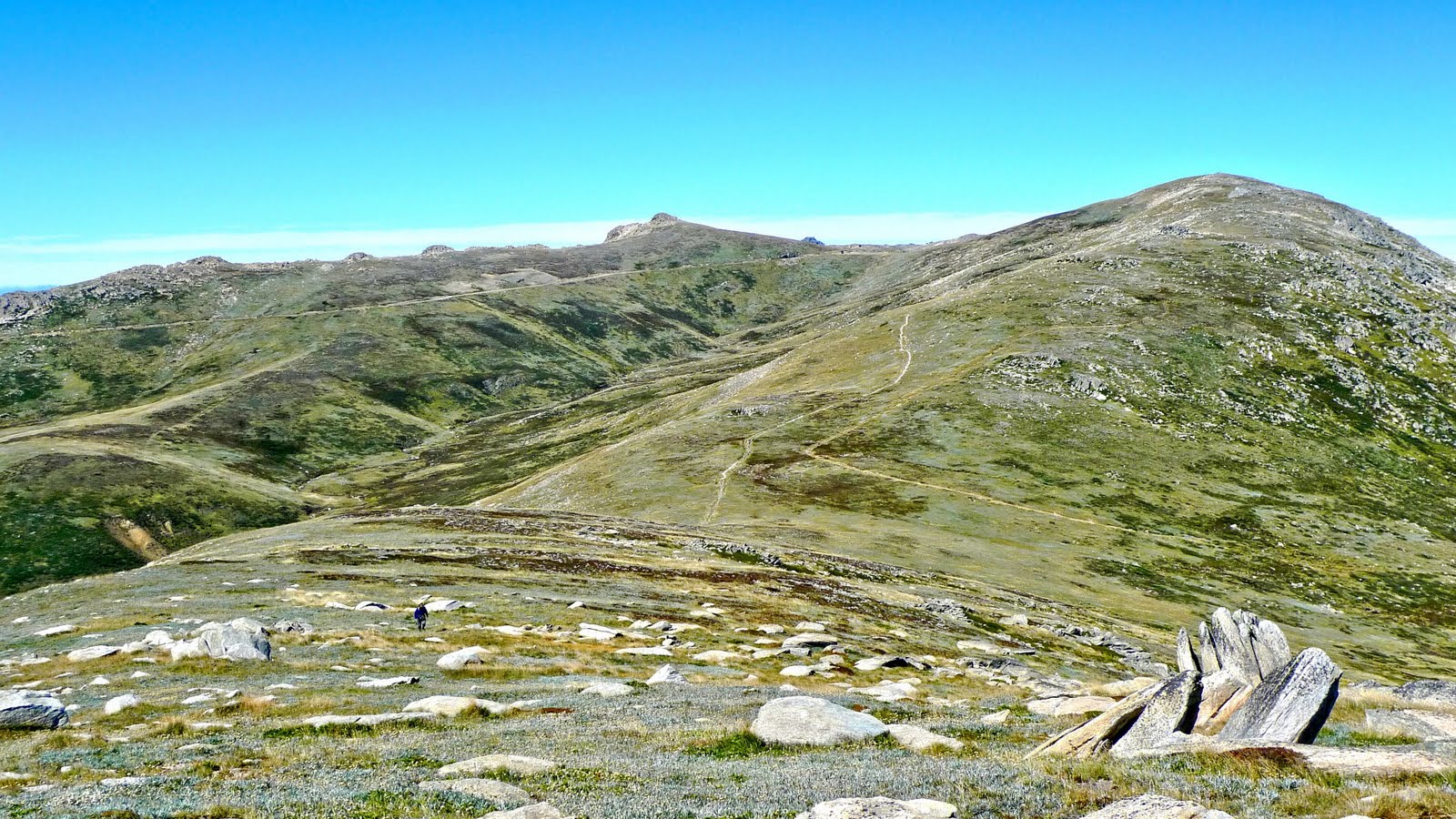 15.) Ricky is heading towards Muellers Peak. Mt Townsend is on the left. 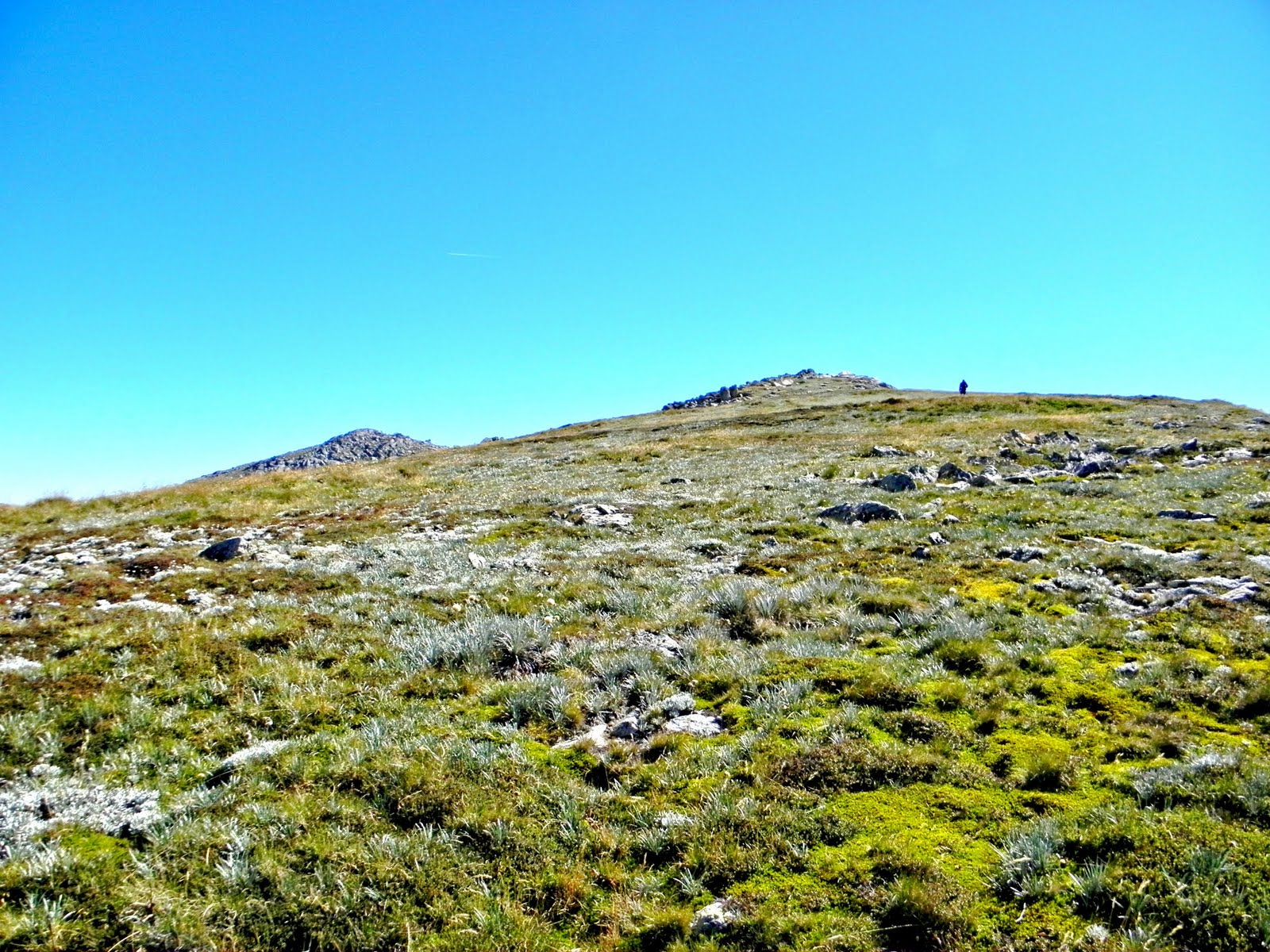 16.) I am at the top of Muellers Peak. It has a very nice view of the blue Albina Lake. 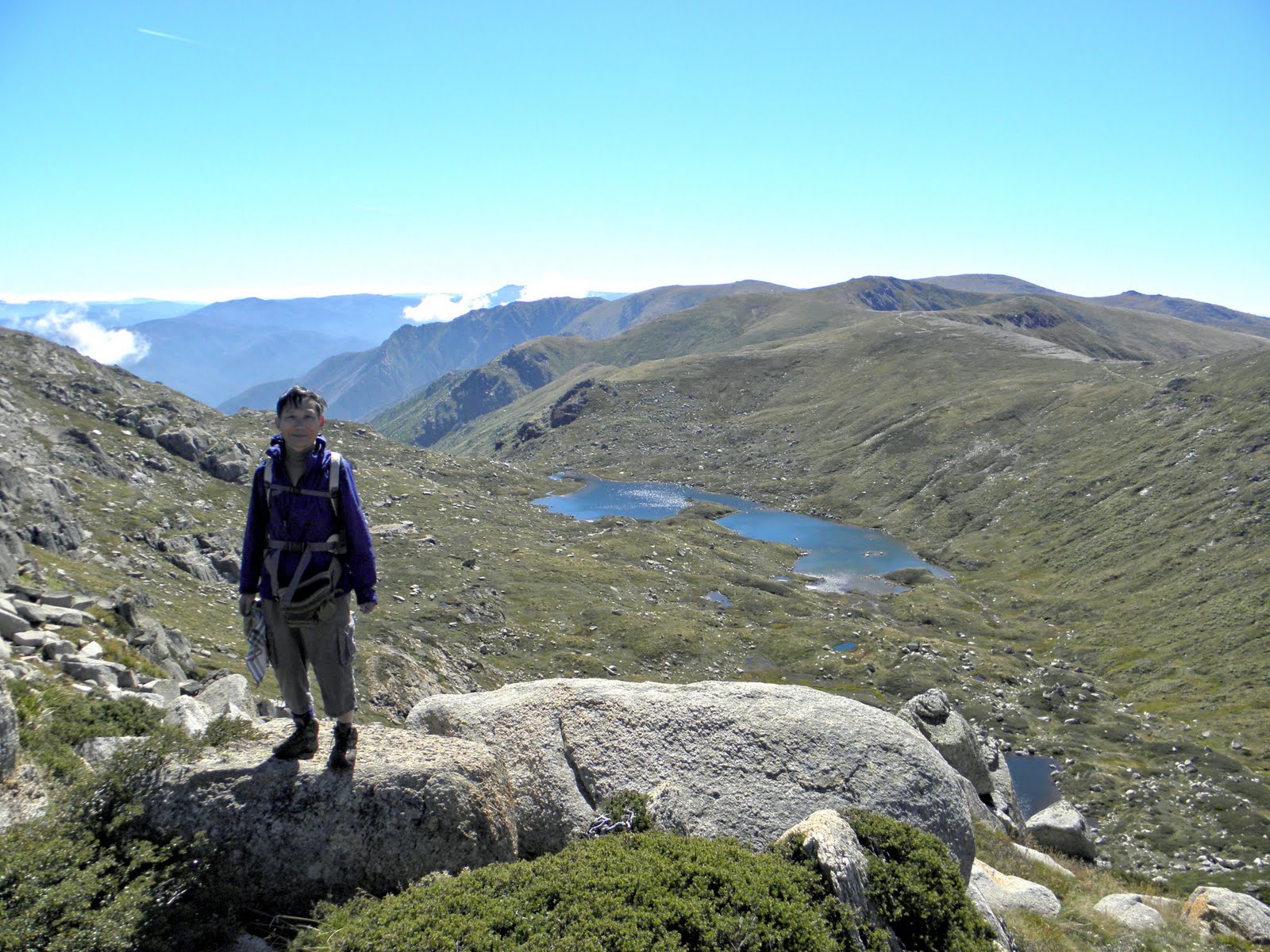 17.) We are looking at Mt Townsend from Muellers Peak. We are going there!!! 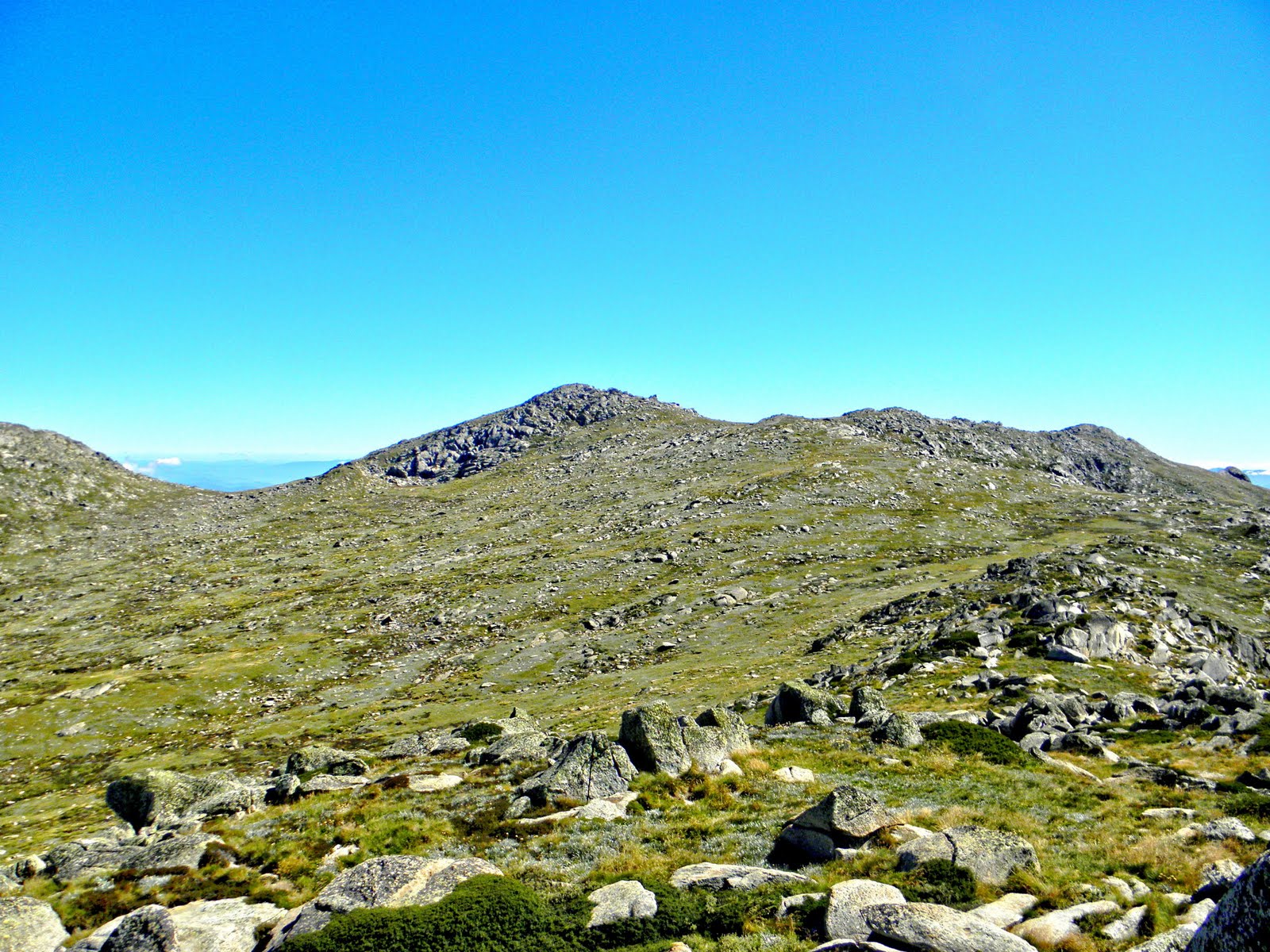 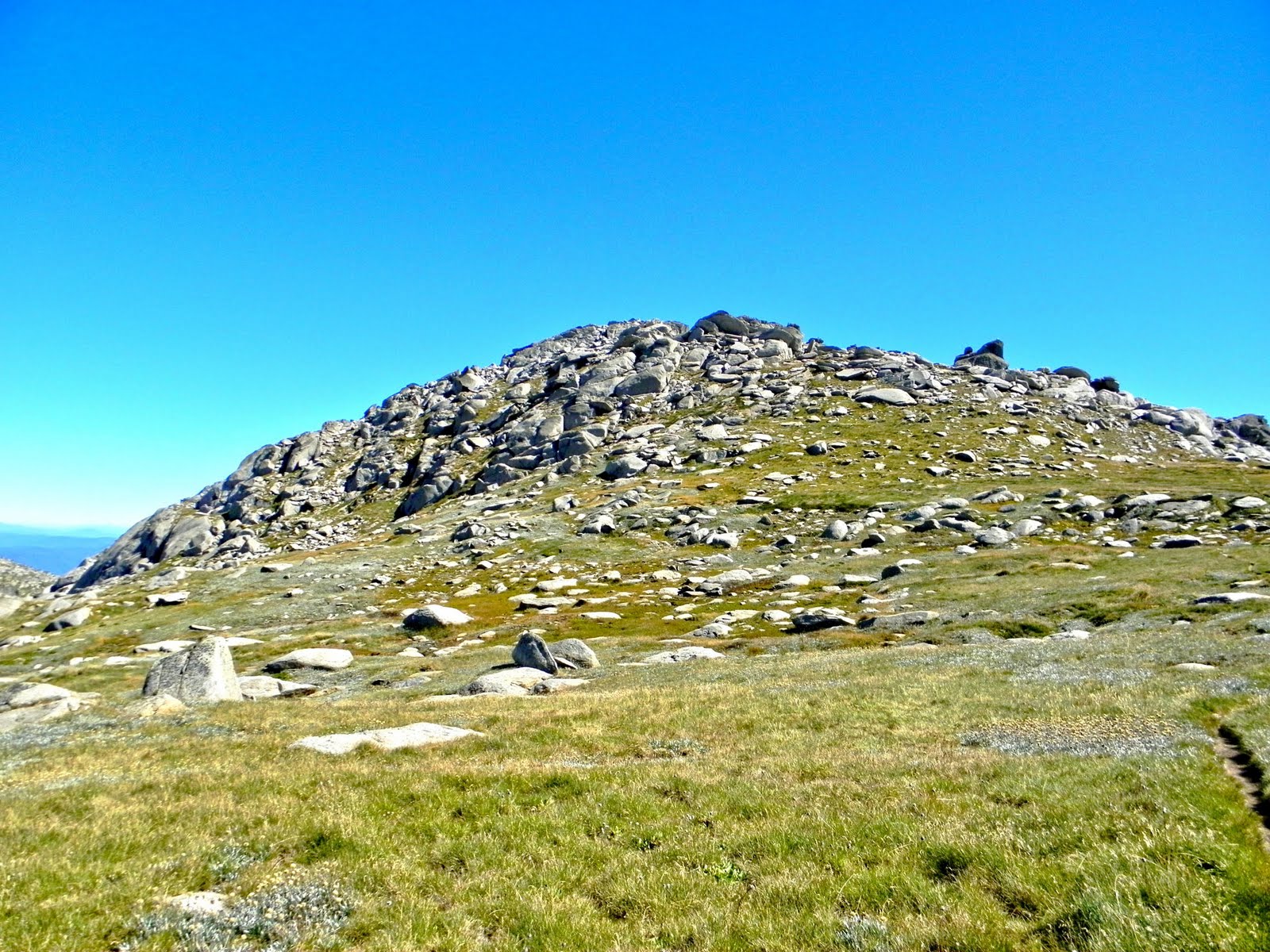 19.) A precariously positioned large granite block near the summit of Mt Townsend. Ricky took this nice picture and many others in this blog. 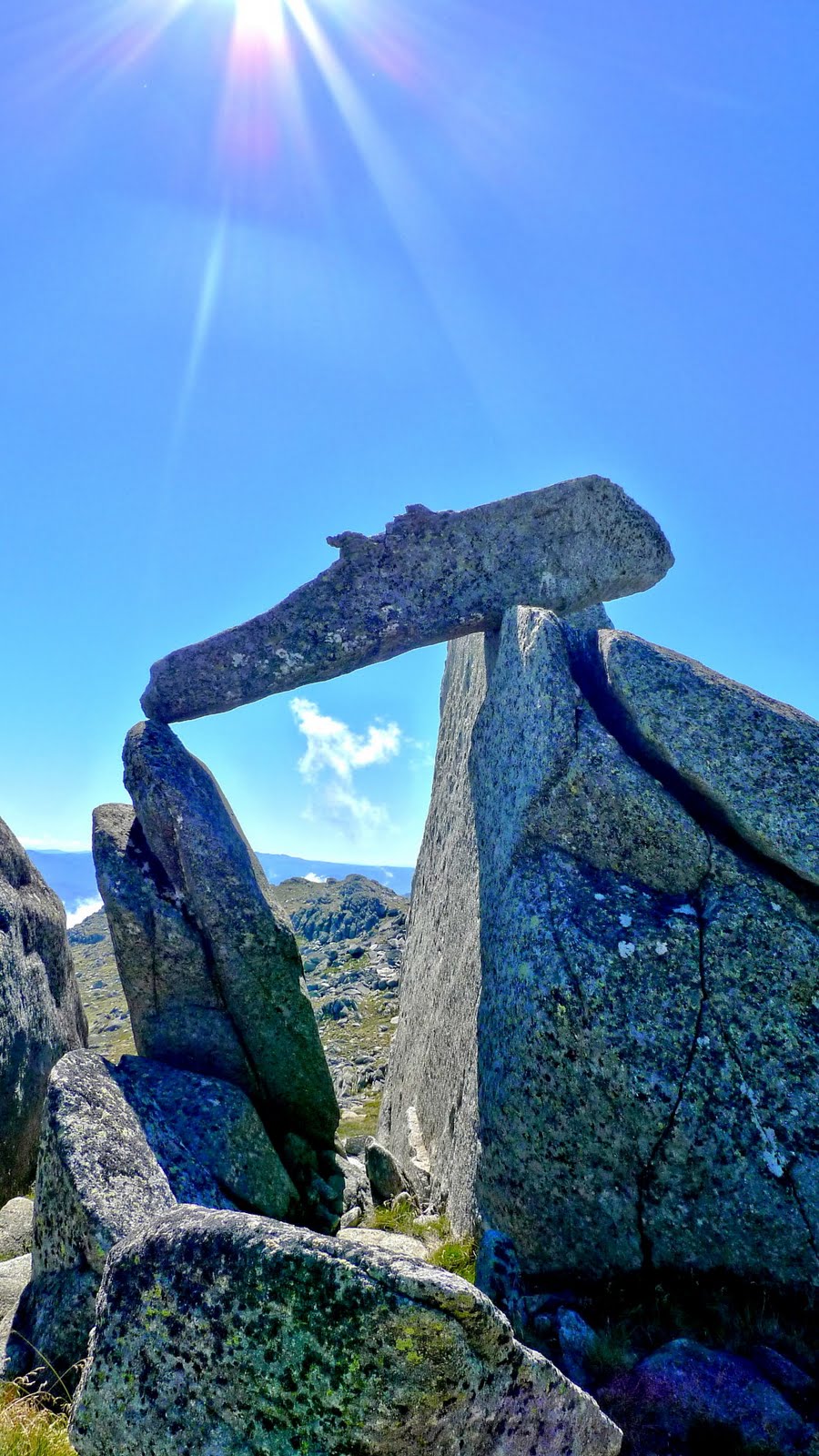 20.) The small figure near the centre of this pic is me. (Click on the pic to enlarge it.) The final ascent to Mt Townsend summit is to climb up this near-vertical slope of loose boulders. 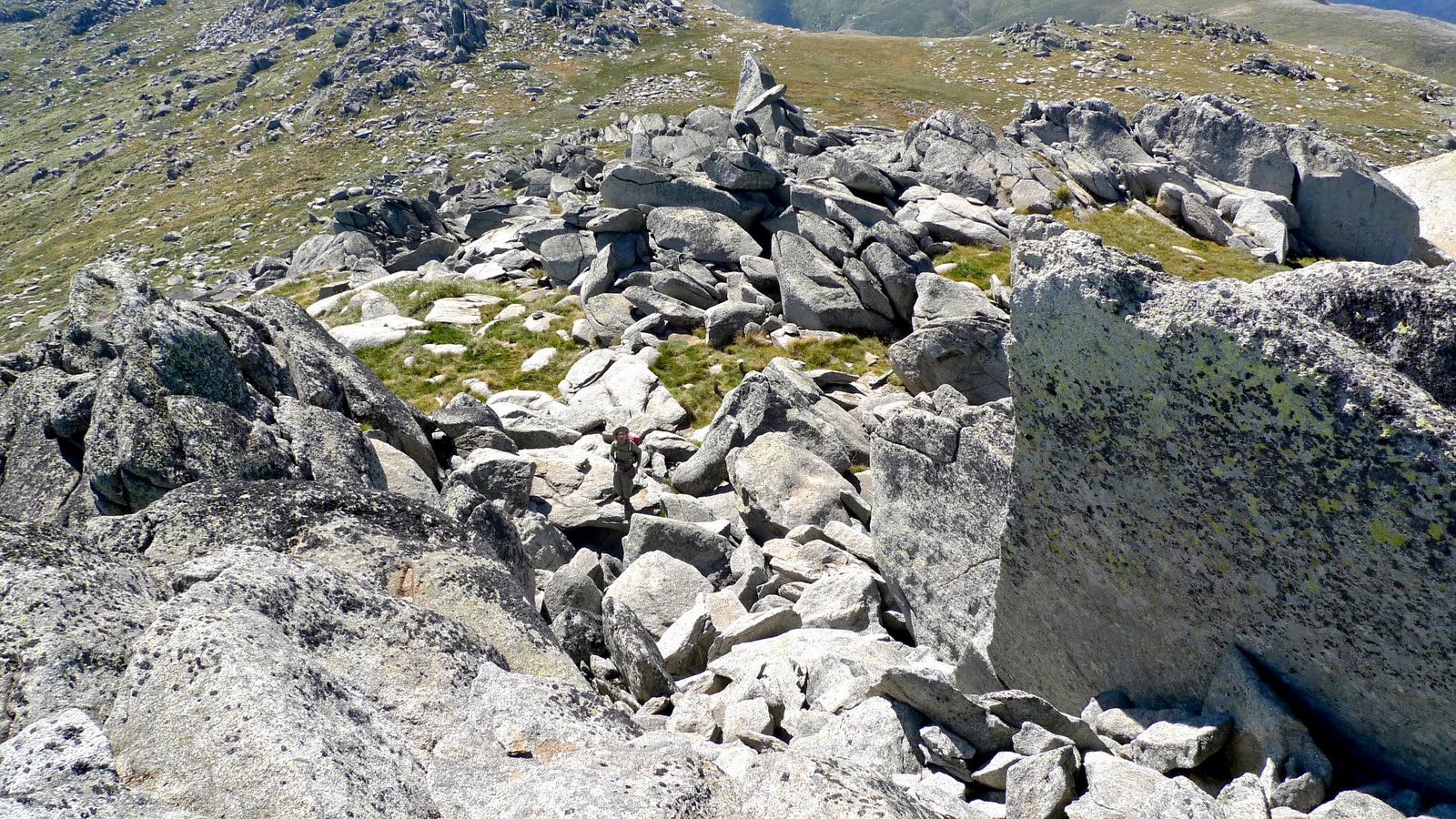 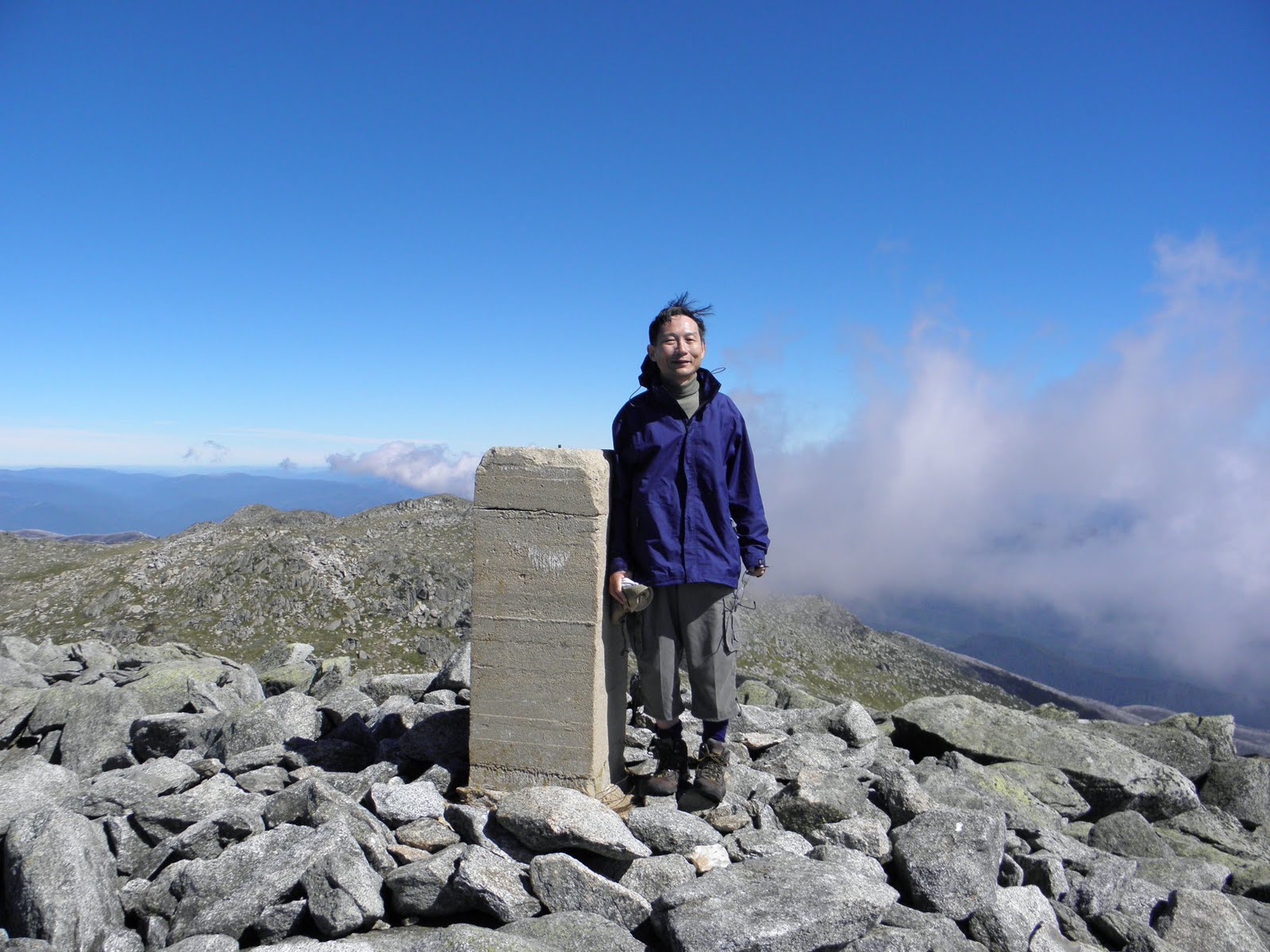 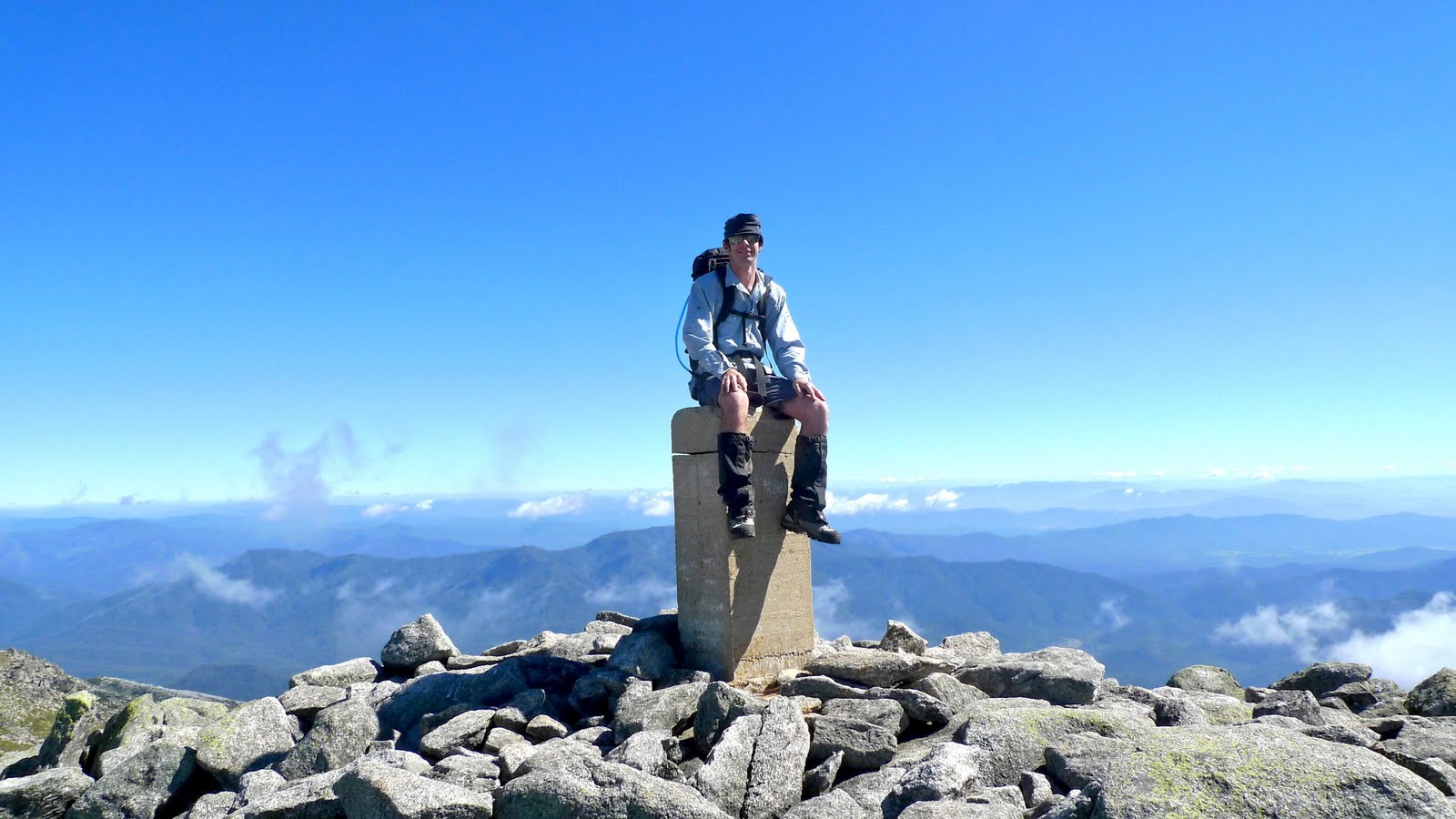 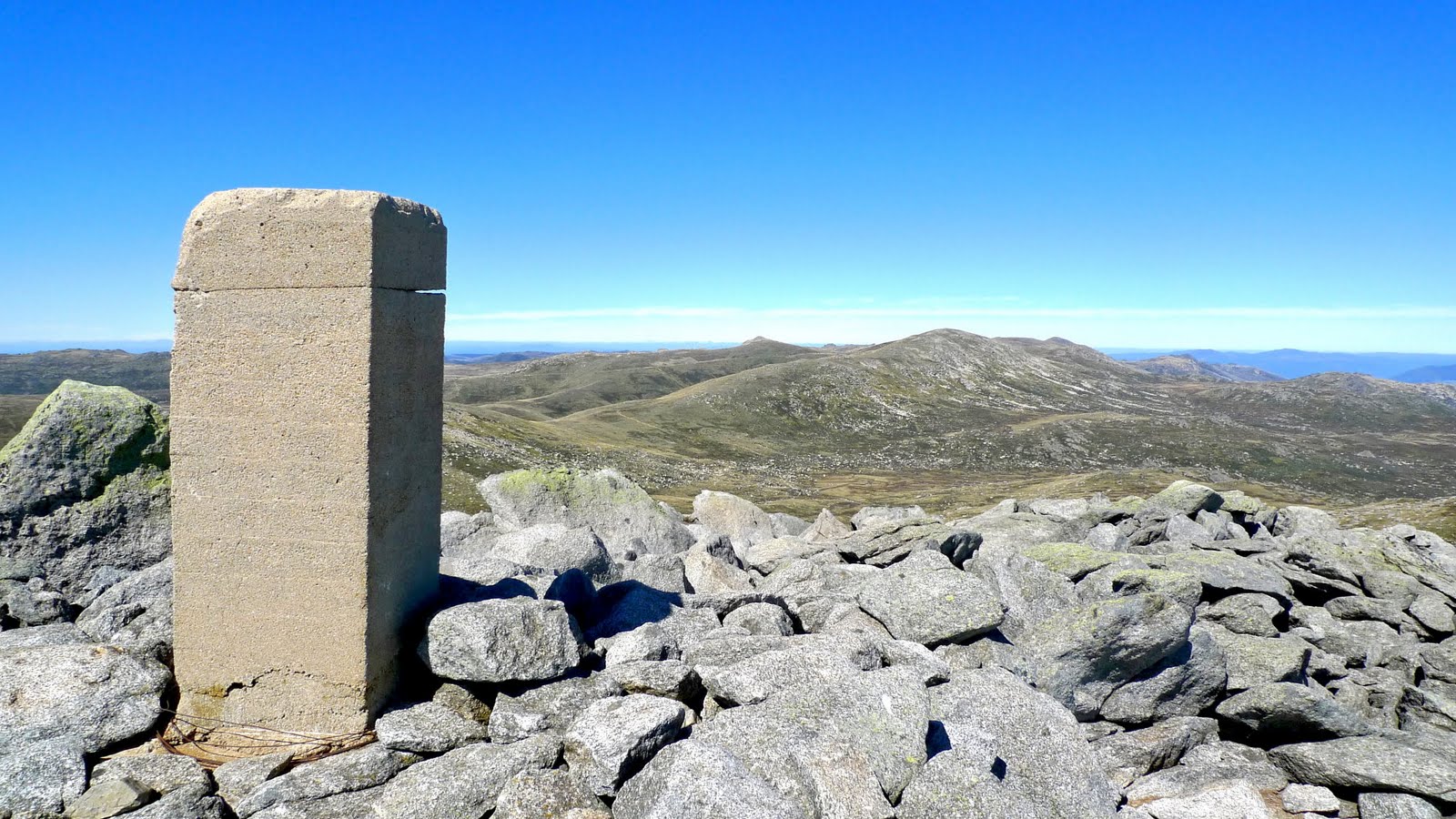 24.) Returning back to our car, Ricky almost steps on a snake. 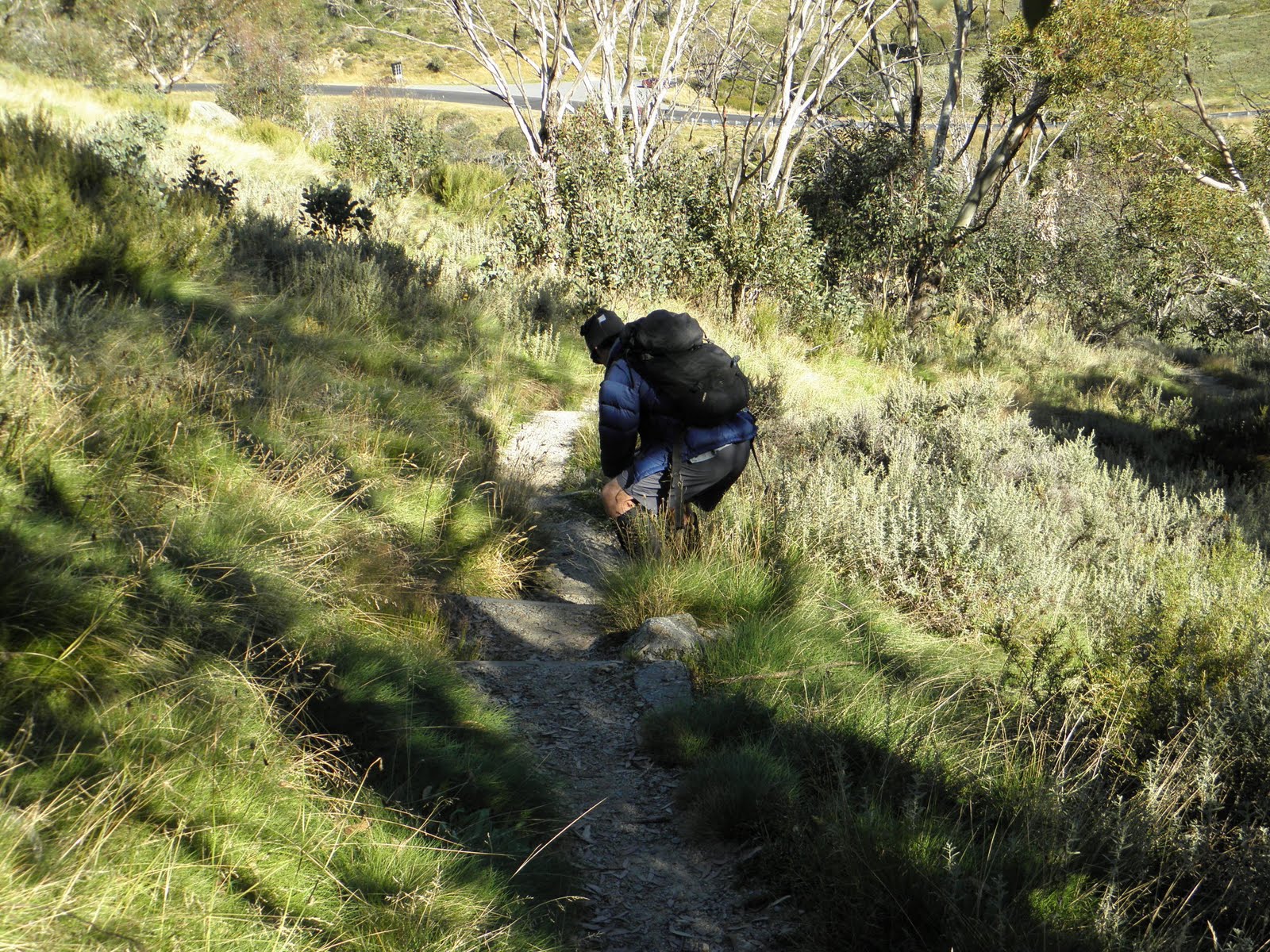 25.) It is a Eastern Brown Snake, often referred to as Common Brown Snake, and is the second most venomous land snake in the world ... see http://en.wikipedia.org/wiki/Eastern_brown_snake 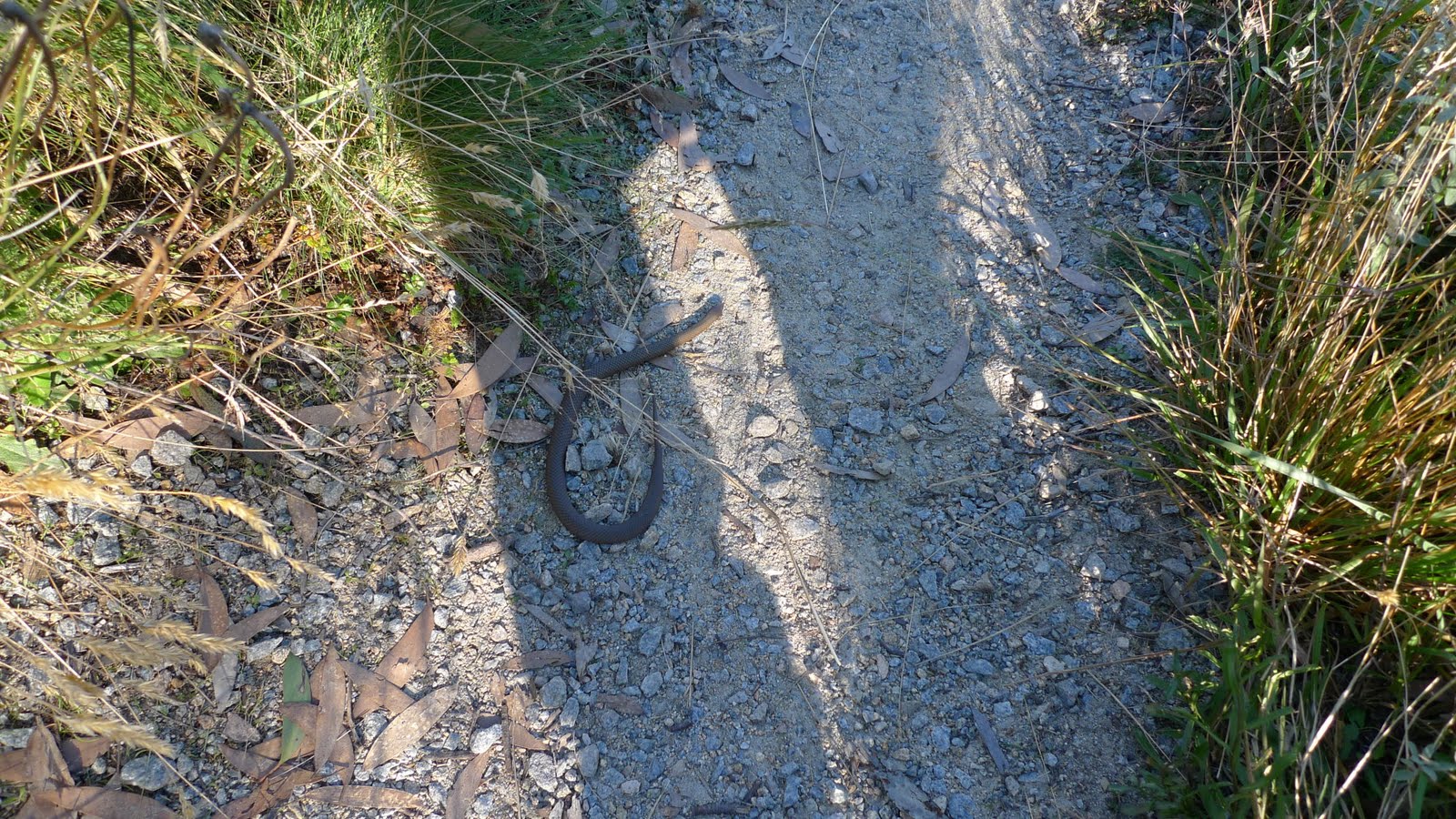 Appendix: State-8 Peaks
I've now climbed 5 of the highest peaks in the 8 Australian States/Territories ... called State-8 peaks. Links to the other 4 mountains are:

This completes my mission of climbing the State-8 peaks !!!