The event:
- Organized by Oxfam
- 550 teams-of-4 to run/walk 100 km
- Lottery draw used to limit number of teams to 550
- Website of the Sydney event: http://trailwalker.oxfam.org.au/sydney/
- For other cities around the world: http://www.oxfam.org/en/getinvolved/trailwalker

The course:
- Sydney
- From Parsley Bay at Brooklyn to Georges Heights Oval at Mosman
- 100 km
- Much of the course is a rugged and rocky goat trail through bush and mountainous areas in Sydney's national parks.

The team:
The team was formed in late February.

2. Tania - Team leader. Competes regularly in cycling, swimming and running competitions - a real iron lady! This is the 3rd time she tried this Sydney event. Last year, her team finished in under 26 hrs.

3. Pauline - Regular netball and hockey player. Had run a marathon in 3:40. She is another iron lady!

Rajesh used to be our 4th team member. He was the slowest guy in the team. Potentially he could be the fastest as he was tall and muscular ... one of his step was one and a half of our steps! But he had virtually no hiking experience in the past. He didn't play any sports. And now, he hardly did any meaningful exercises on his own that was useful for this 100-km event. Not surprisingly, he never completed a single training walk with us - always pulled out early for one reason or another. Anyway, one day in early July when walking with us, wearing normal joggers, he accidentally kicked on a rock and fractured a toe. This ended his short lived walking career. Later on, Tania found Richard as a replacement. Richard was perfect for our team ... he was fit and fast.

Team number/name:
- 455
- Mafficking (It means "Exulting riotously" - I bet you don't know this word!!! Well, you learn something new everyday!!!)

By the way, Rajesh suggested "Mafficking" as the team name. So at least he contributed something to the team.

Team training:
We did a few short walks in March and April. In early May, Tania drew up our official training schedule - a training walk every 2nd Saturday on the actual trail. We started off with a 30-km walk. Then gradually increased the distance to 70 km. In fact, towards the end, we had two 70-km training walks.

Tania was an early riser. She hated having to start so late. I, on the other hand, am a late riser, prefer to start late .... the later the better.

But Tania did have a point. The later we start, the more of the trail we would walk in the dark. Although we would have daylight the next day, however the final section of the course was mainly over suburban streets. Daylight was not particularly important then.

Some observations:
- The team had two 70-km training walks. These were most helpful. The first time I finished 70 km, I was dead tired ... wouldn't be able to walk another step. After the second 70 km, I was tired, otherwise ok and no where as dead as after the first one. On event day, at the 70-km mark, I still had plenty of energy left.

- Prior to the walk, I worried about becoming sleepy during the night. Well, I never felt sleepy that night. My theory is, while walking vigorously the way we did, the blood was circulating quick and fast throughout the body and the brain. Hence it was not possible to be sleepy. Also, being super fit after the two 70-km training walks definitely helped.

- I found GU Energy Gels really great in giving you instant energy (search their website: https://guenergy.com/ ). On an information night 2 weeks out from the event, These gels were given out for free. I took away 8 packets. Each packet is 32g and gives you an immediate shot of 100 calories in the form of a carbohydrate blend. But warning: you should drink plenty of water after gulping down the gel ... as is stated clearly on the packaging.

Suggestions for improvement:
- Keep a tight reign on rests at checkpoints ... do not over stay.

- Get rid of supper at checkpoint 6, Macfarlane Reserve. Instead, have an early but more substantial breakfast at checkpoint 7, Davidson Park (instead of at checkpoint 8, Ararat Reserve). This should shave about 20 minutes from the walk. Carry some muesli bars or energy gels with you if you need extra fuel on the walk.

- Jog the last 20km wherever the trail is level and smooth.

Thank you - Donation:
Each team was required to raise a minimum of $1,000 donation to Oxfam (tax deductible). Many thanks to the following people who donated on my behalf:
- Dad & mum
- Victoria
- Barbara
- Julie & Bruce
- Philomena
- Angela
- Etti
- Helena
- Lowe Sau Tong

Thank you - Checkpoint support:
And many thanks to the support crew who brought food and drinks to the checkpoints. It was their efforts which made our walk possible.
- Matt: 7:19pm dinner at Checkpoint 3, Bobbin Head
- Etti: 1:31am supper at Checkpoint 6, Macfarlane Reserve - nice hot soup on a cold night
- Jason: 6:38am breakfast at Checkpoint 8, Ararat Reserve

To the pictures: (To enlarge a photo, click on it.) 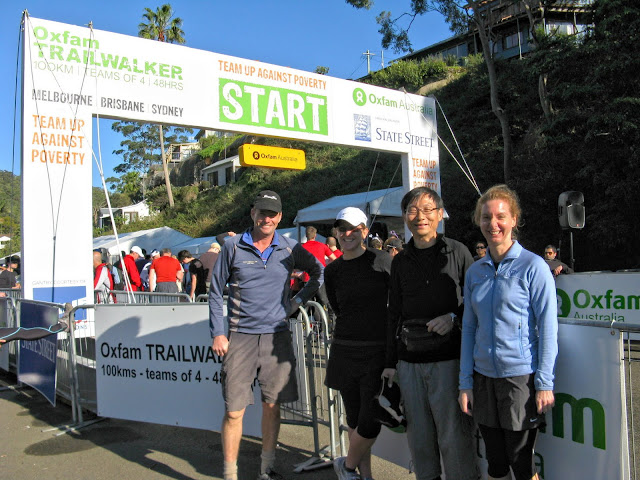 2.) Here is a typical trail for the 100 km. It is not a smooth road. It is a rocky and rugged goat trail through bush and mountainous areas in national parks around Sydney. Many sections of the trail are one-man wide. If you get stuck behind a slow walker (like now), you won't be able to overtake and just have to wait till the trail becomes wider. It is not easy to get up to a speed of 4 km/hr on a trail like this. 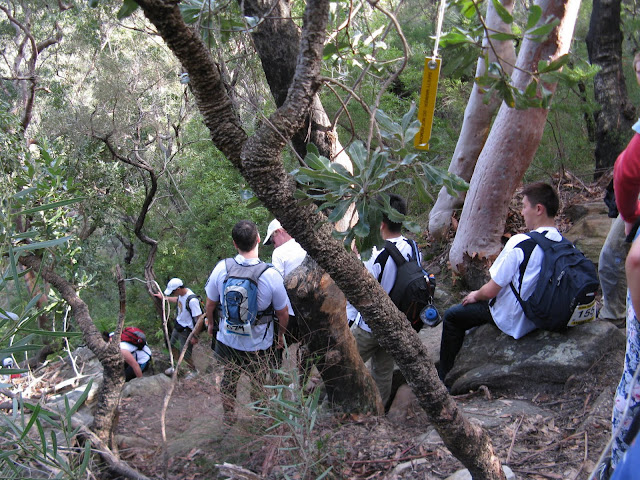 3 & 4.) Plenty of climbing up and climbing down boulders 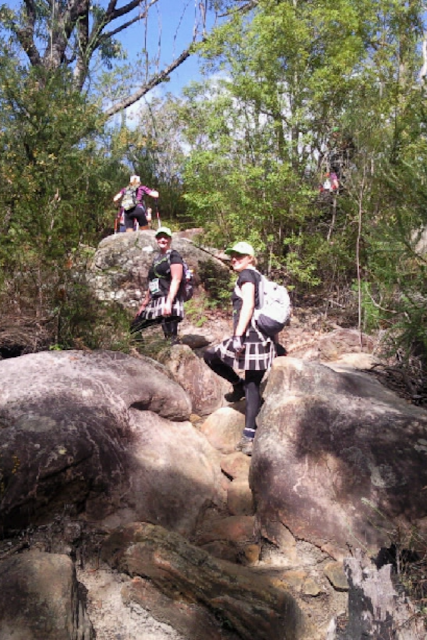 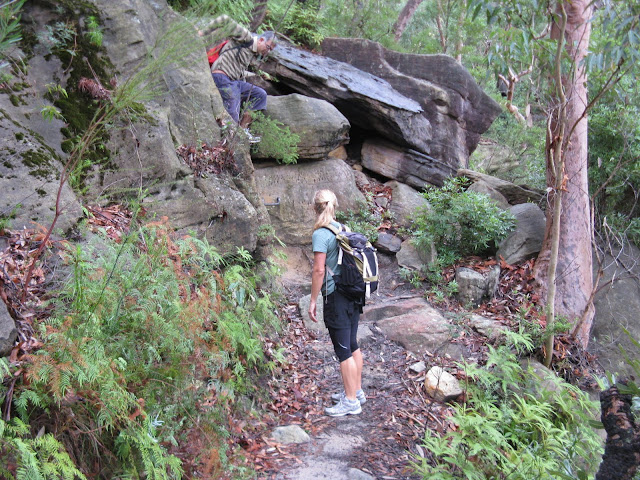 5.) Jerusalem Bay in Kuring-gai Chase National Park - nice view, but we don't have time to stop and enjoy the scenery. 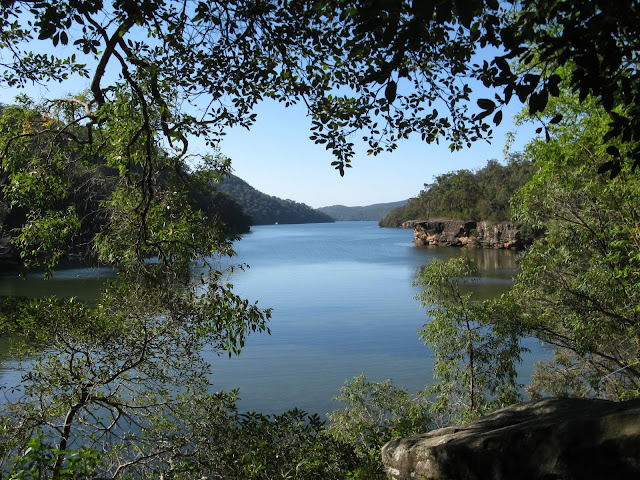 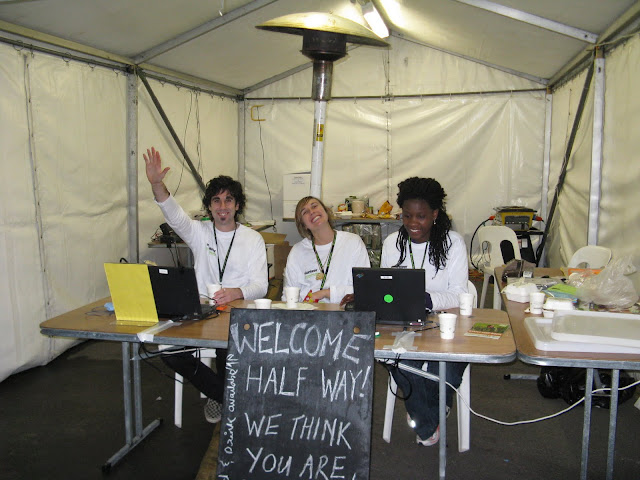 7.) Team photo taken at the halfway checkpoint ... Here, we are all given a woollen scarf in case we want to have a long rest or sleep over. But we plough on. 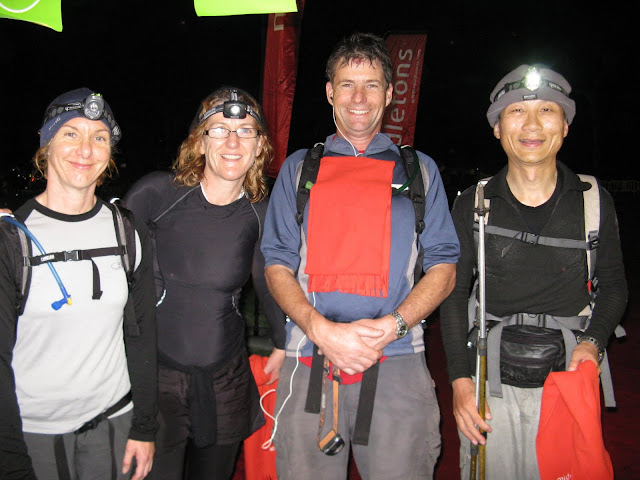 8.) If you think we are having a tough time, spare a thought for the 750 volunteers who make this event possible. For example, on the night, this girl stands in the cold on a road junction near a checkpoint to guide people onto the trail. 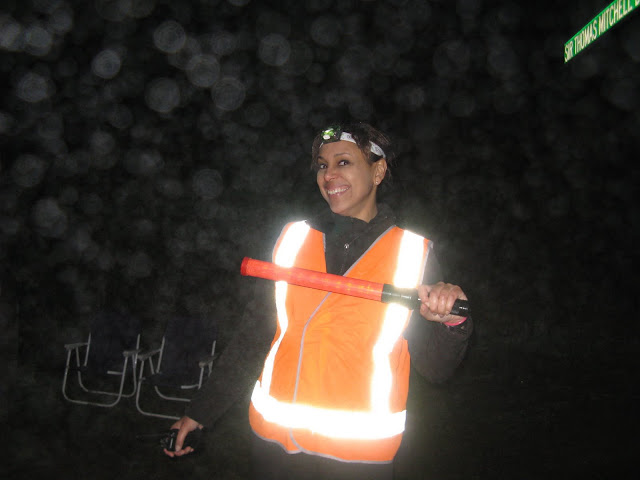 9.) Next morning, 9:06am at the finishing line ... looking a bit tired after 24 hrs and 6 mins of mostly non-stop walking ... a really memorable experience!!! The 6 minutes over our self-imposed target of 24 hrs is a bit of a blemish. Otherwise our result is very good !!! Only 55% of the teams are still intact at the end. But all 4 of us make it through the 100 km together. 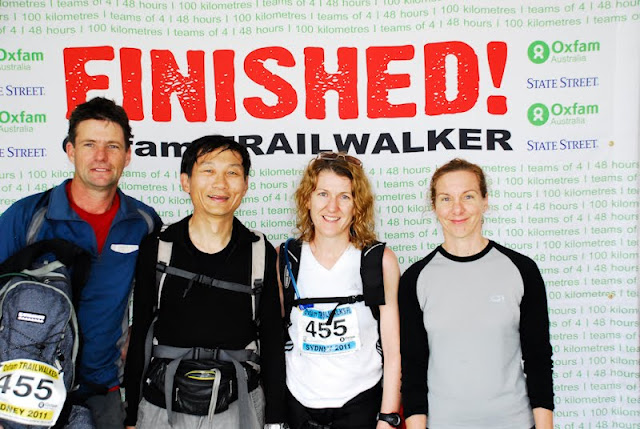 10.) Saw this strange and wonderful spider web during a training walk few months earlier. Does anyone know the name of the spider which weaved this web? 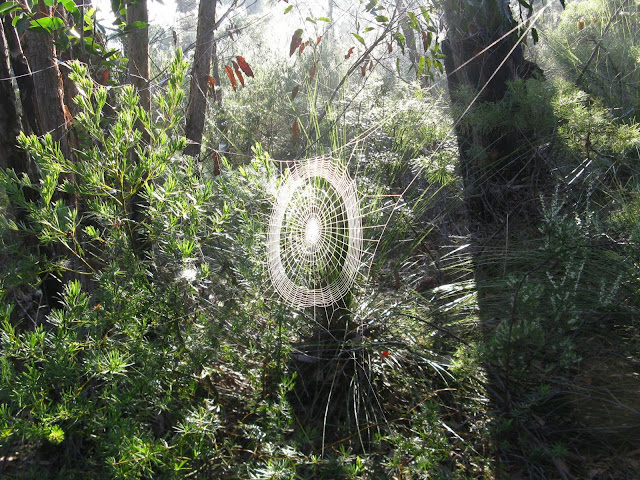 If anyone is interested in joining up with me for a sub-24-hr walk in future Oxfam Trailwalker events, please contact me.