The trail to Orphan Rock is closed to the general public as the rock is deemed unstable and dangerous to climb. And so, I won't be revealing how to get there.

Orphan Rock is located in the Blue Mountains near Scenic World tourist area in Katoomba. It is a pillar of rock separated from the main cliff and standing solitarily like a sentinel on duty.

You can just see the tip of the Rock from Scenic World. Otherwise, the entire Rock is obscured by trees, hence no tourist there would realize the tip is the top of the Rock. But if you take a short walk to the nearby Rieds Plateau, or take a ride in the Scenic Skyway, you will get a magnificent view of the Rock. No wonder prior to 1900 it was the main icon of the Blue Mountains.

By comparison, The Three Sisters received little attention then, and an air of puzzlement for those who saw them. "A cathedral with three spires" or "weird monument of Egyptian architecture" were how they were described.

Then after 1900, The Three Sisters gradually gained prominence in promotional literature. In 1912 they were on the cover of the Katoomba Municipal Council's "Official tourist Guide" and the photographer Harry Phillips raised them in his work to almost mystical status.

But Orphan Rock, while overtaken in the beauty contest, still retained some popularity. A walking track to the top was opened in 1934. But it was closed in the 1950s due to fear the Rock may collapse if a large group of people were to climb it. This track must have made the record as the shortest lived walking track in the history of Australia !

With the demise of the track, Orphan Rock gradually slides into obscurity. It was the logo of the Paragon Cafe in Katoomba in the 1920s with the motto "Stands Alone". And now it lies deserted and stands alone again - a mere curiosity for those who see it.  Ah, but not to me! Once I saw it, I wanted to climbing it.

In 2010, I made an attempt to reach the Rock but was unable to find the land bridge connecting it to the main cliff.  This Christmas, it so happened that Grayson was driving from Melbourne to Cairns and passing Sydney. So we teamed up for an adventure. It took us a while to find the way to the Rock. In the end, like everything in life, perseverance paid off ! 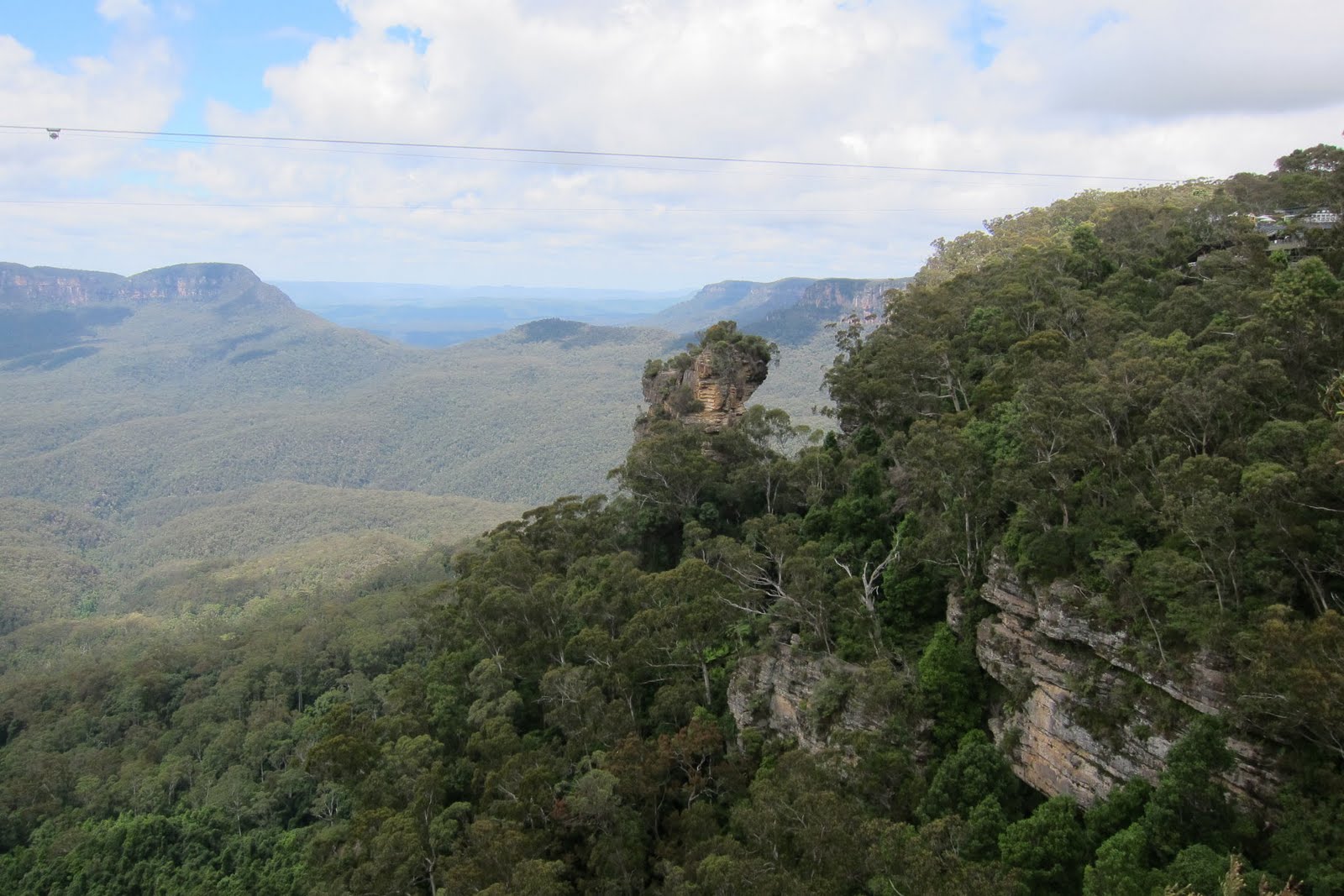 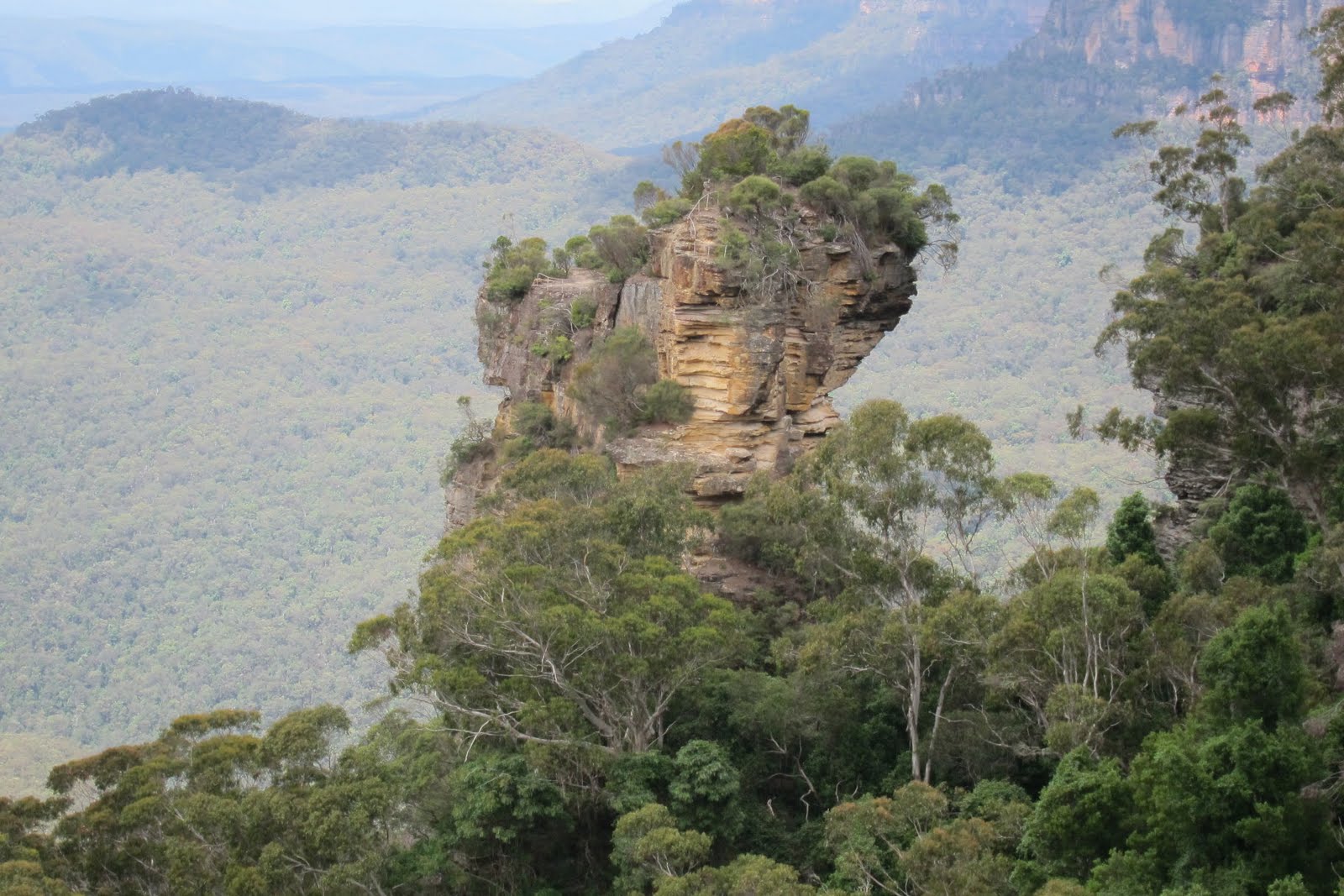 3.)  We bush-bashed our way to the Rock as the old trail (now closed) is overgrown with vegetation. In this photo, you can just make out the old trail. Don't bothered to find the trail on any of the maps. You won't find it. 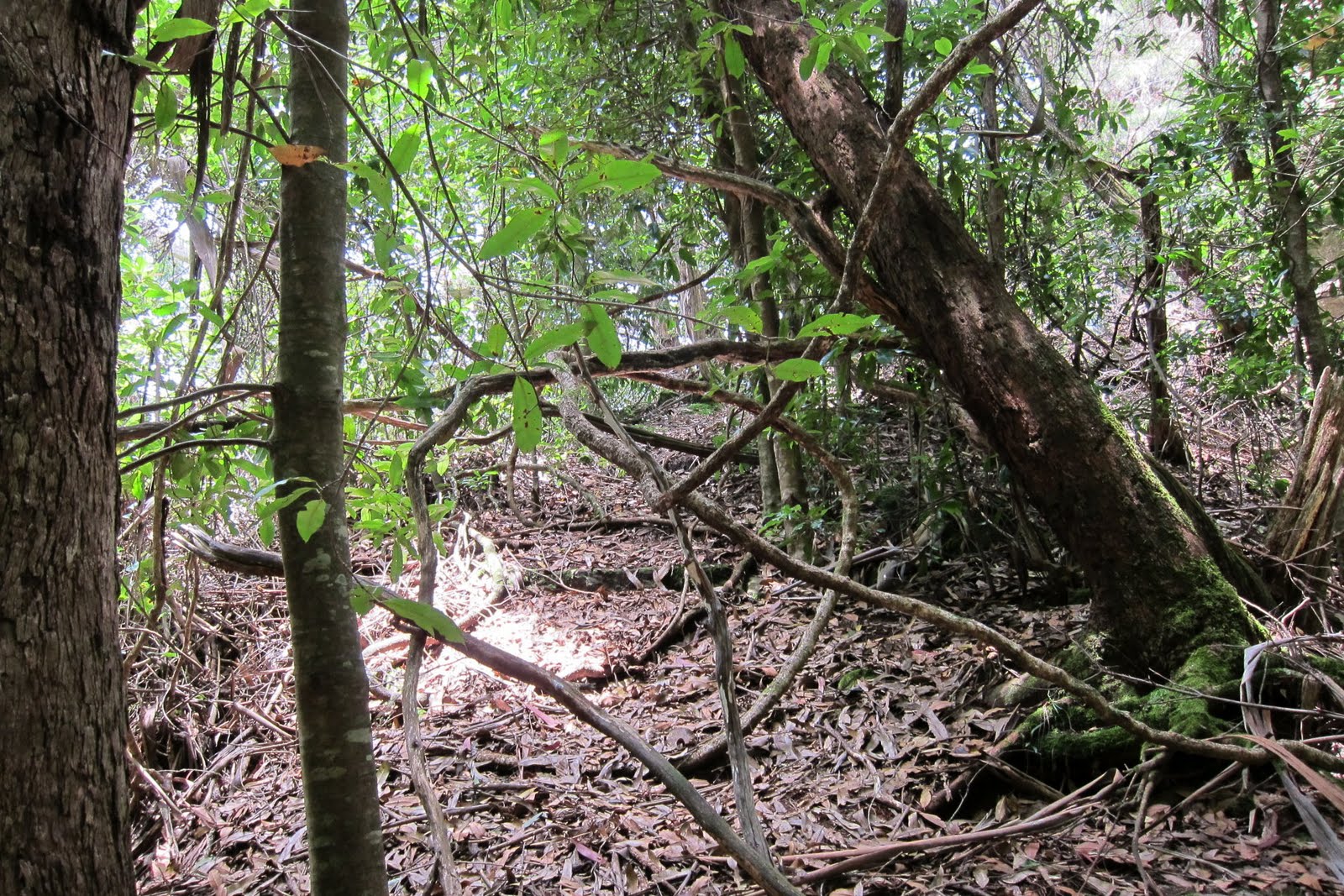 4.)  When we reached the base of the rock, there was a gate with the sign "DANGER, AREA CLOSED". Ah, love it !!! Whenever there is such a sign, there is always goodies inside! 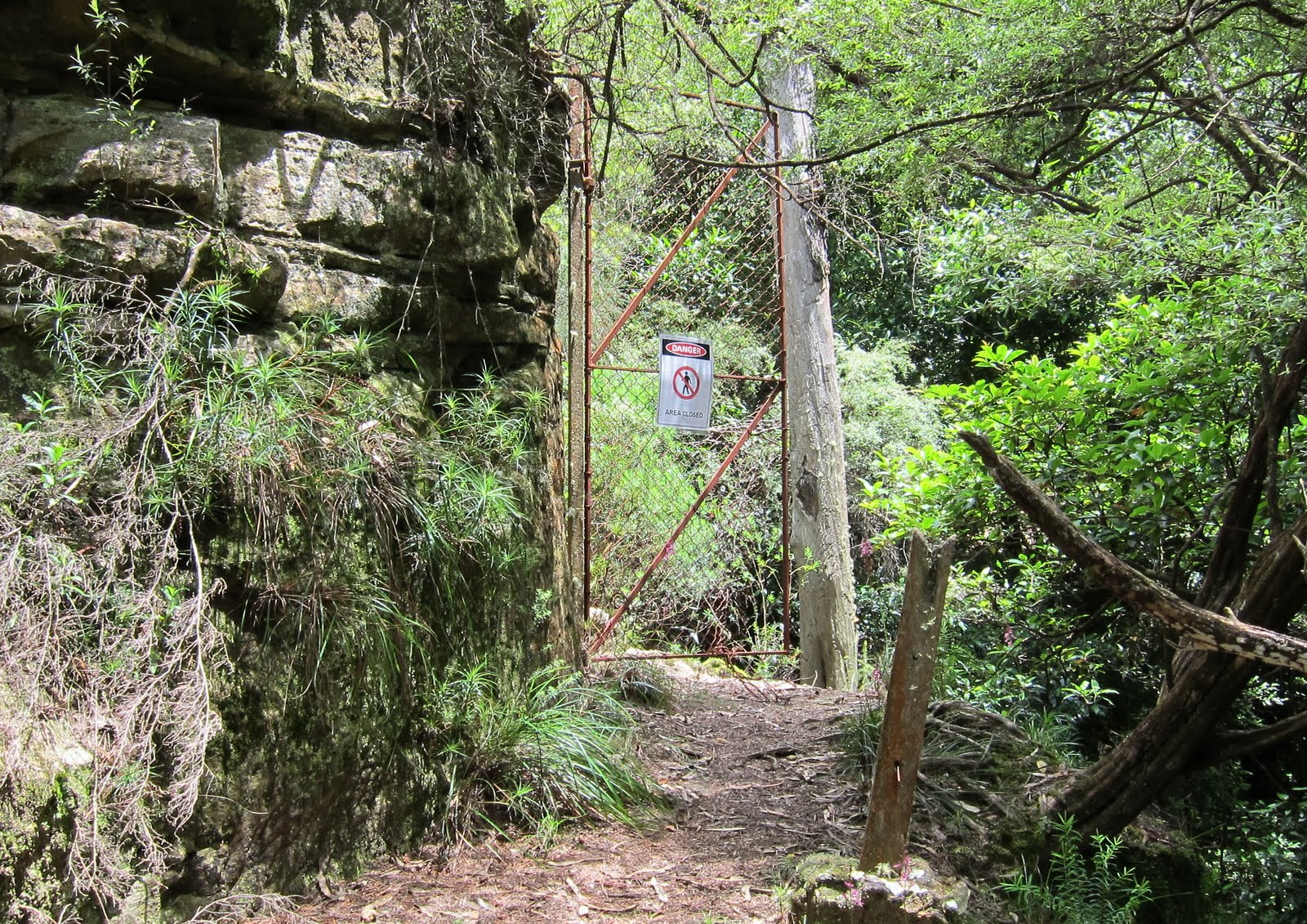 5.) On the Rock now, and looking down and across at the main cliff on the opposite side 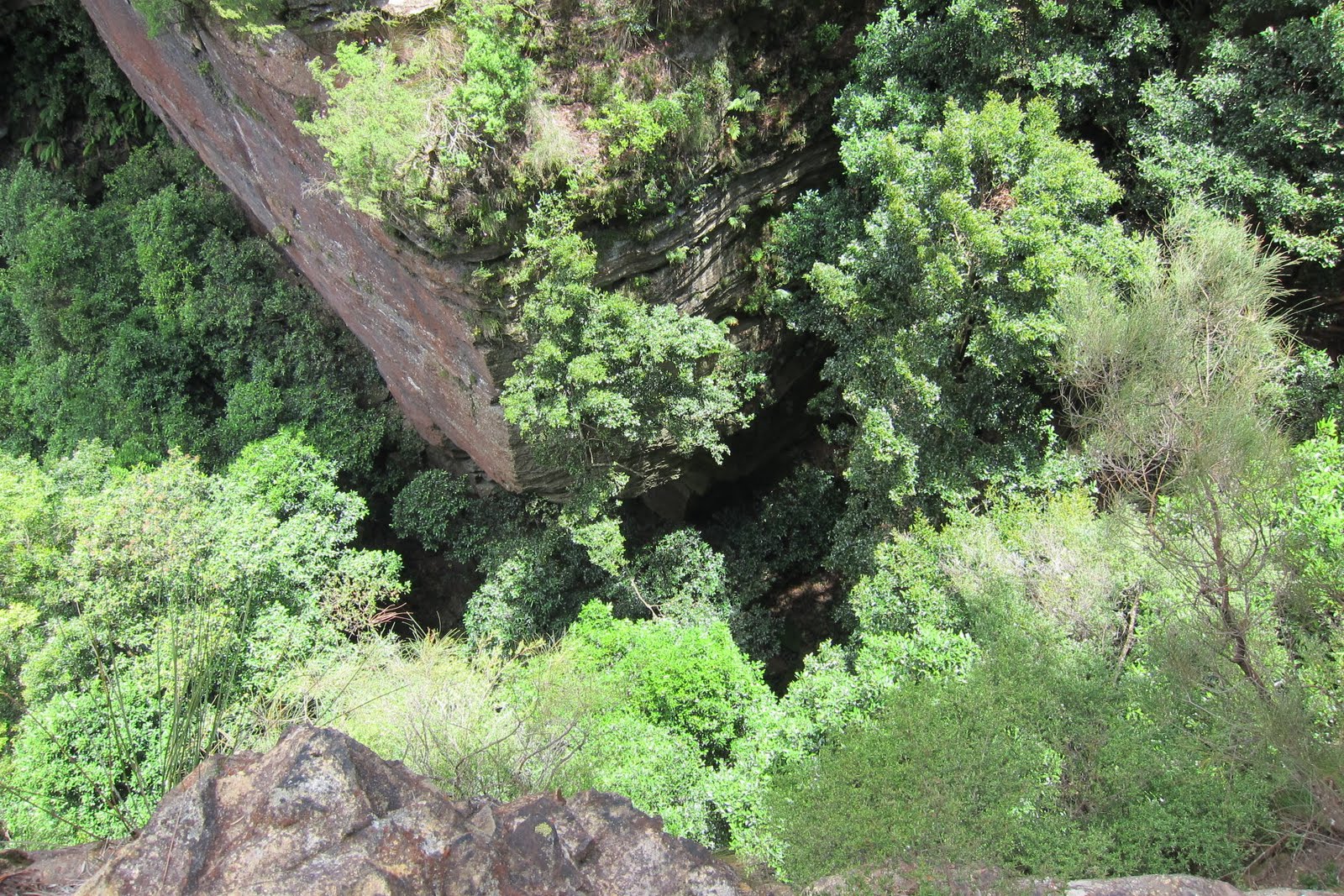 6.) An old photo taken in 1938 showing the stairs up Orphan Rock 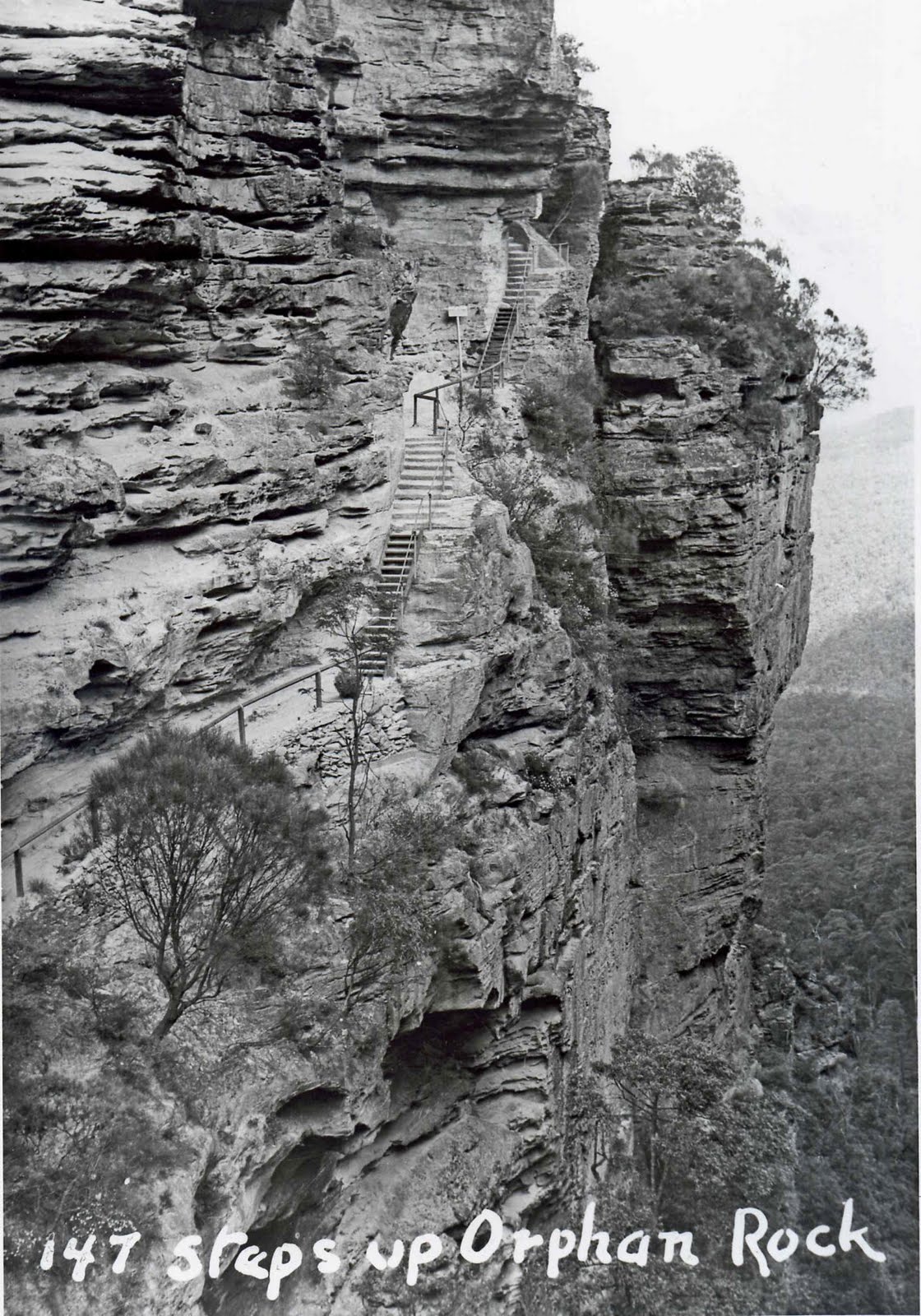 7.) This is what the trail looks like now. It has not been maintained for 60 years. Some steps have rotted away from the stairs. 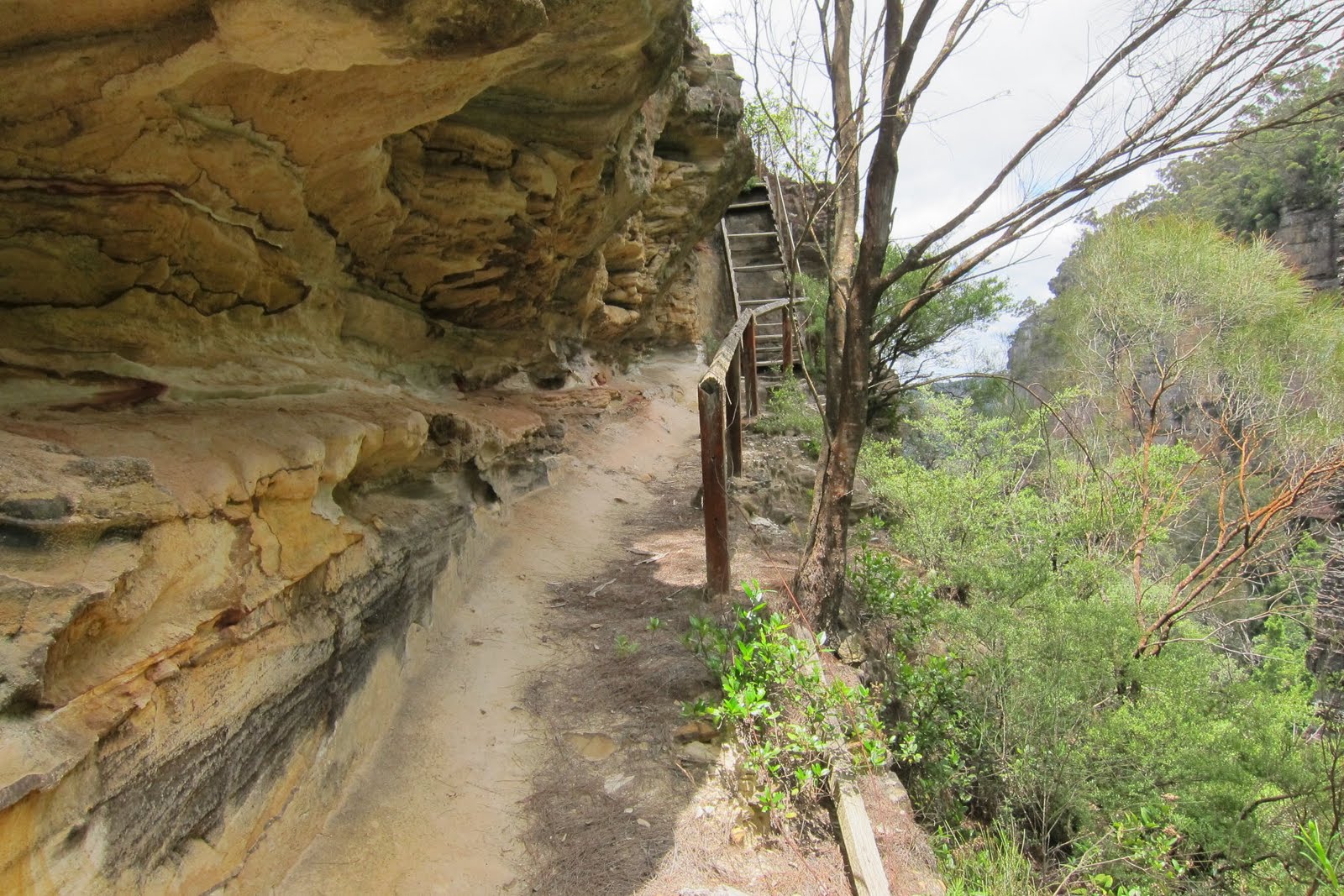 8.) Trail & stairs up Orphan Rock - Don't touch the hand rails, they are rickety and rotting, liable to give way at the slightest touch. 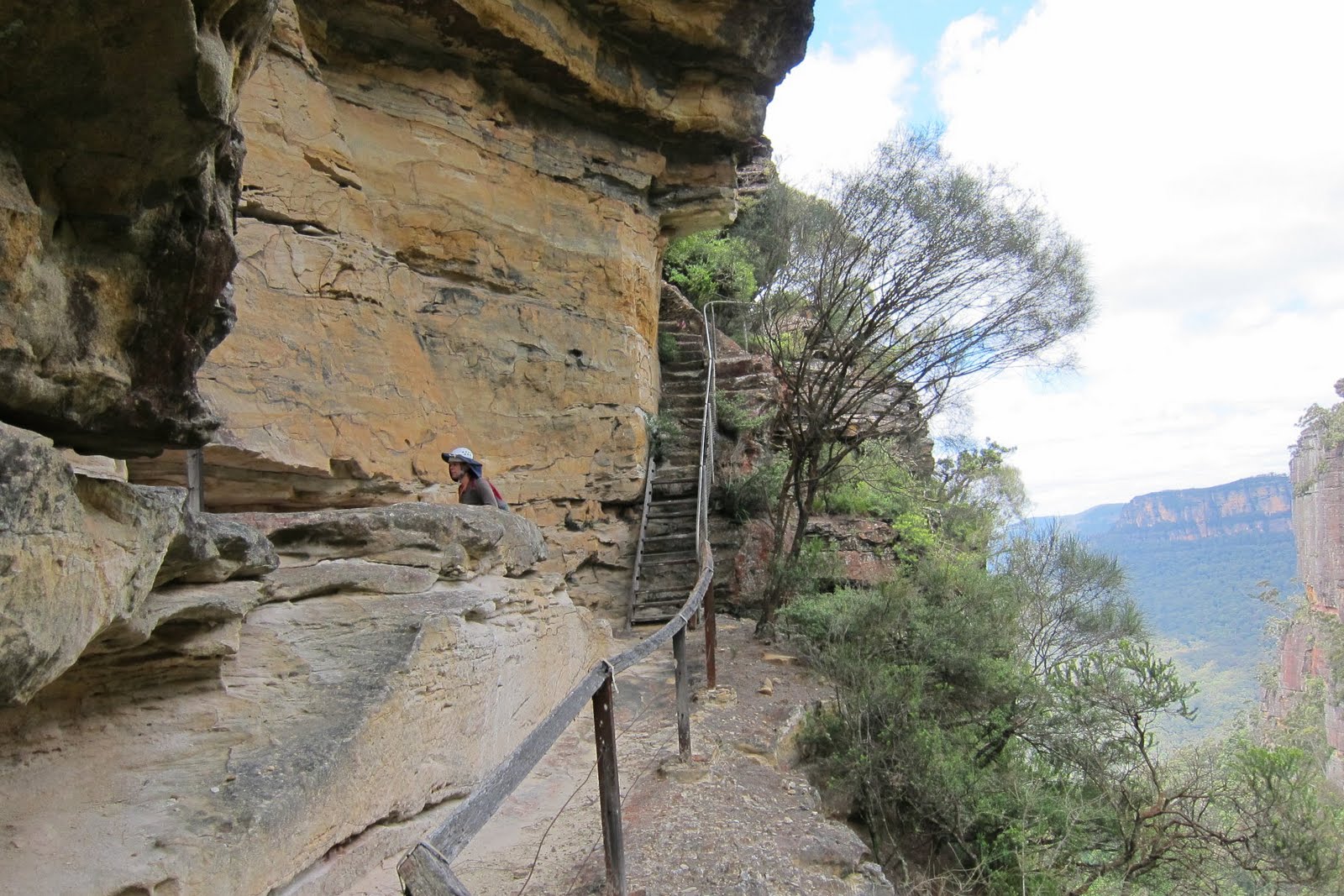 9.) Again, you can see the missing steps in the wooden stairs. You need to be careful when stepping on the steps as they can easily break into pieces. The trail has not been maintained for 60 years. 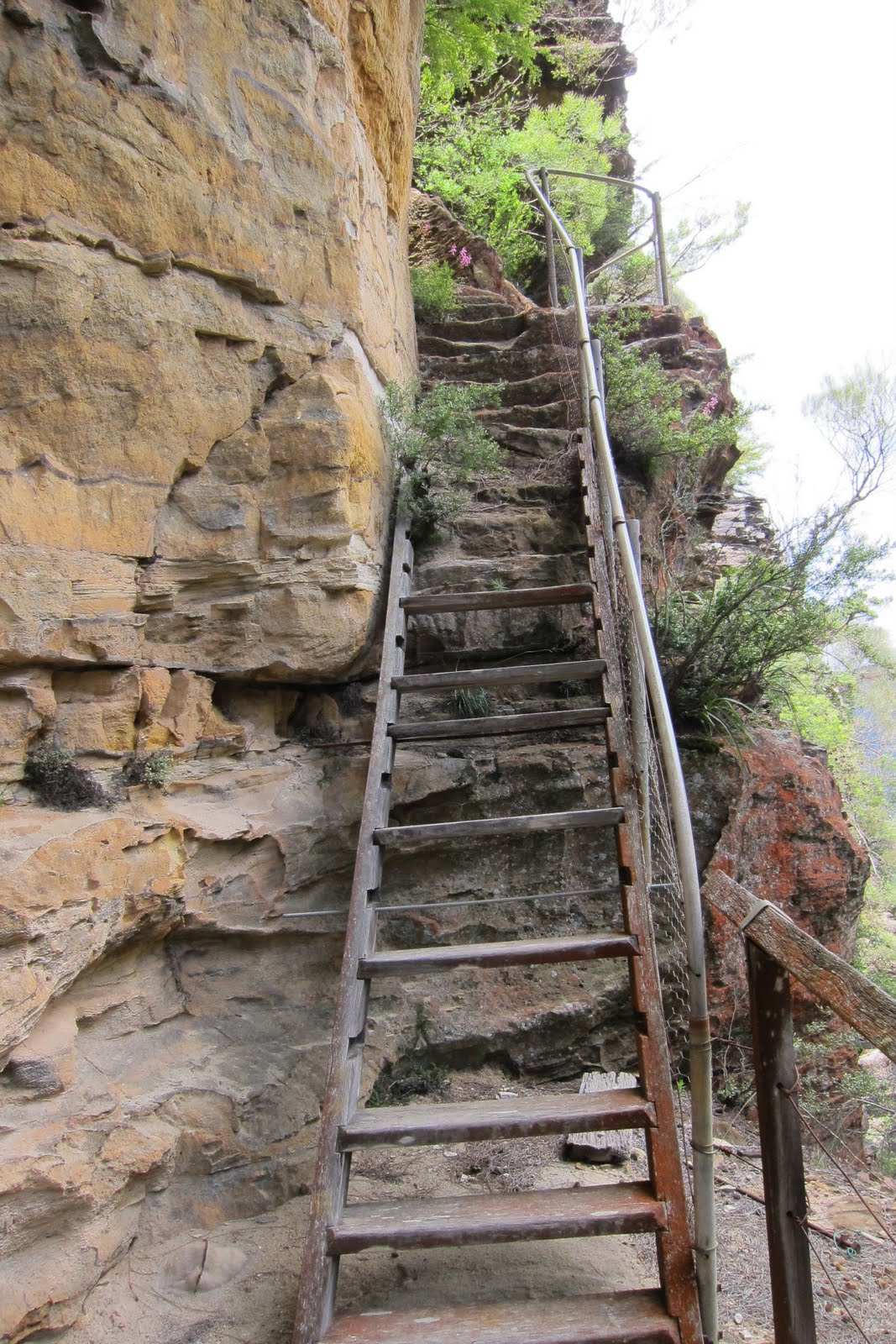 10.) A big hole in the rock. We will be climbing to the top of this rock formation. The reason the Rock is closed to the public is because the whole structure is unstable and may collapse at any time. 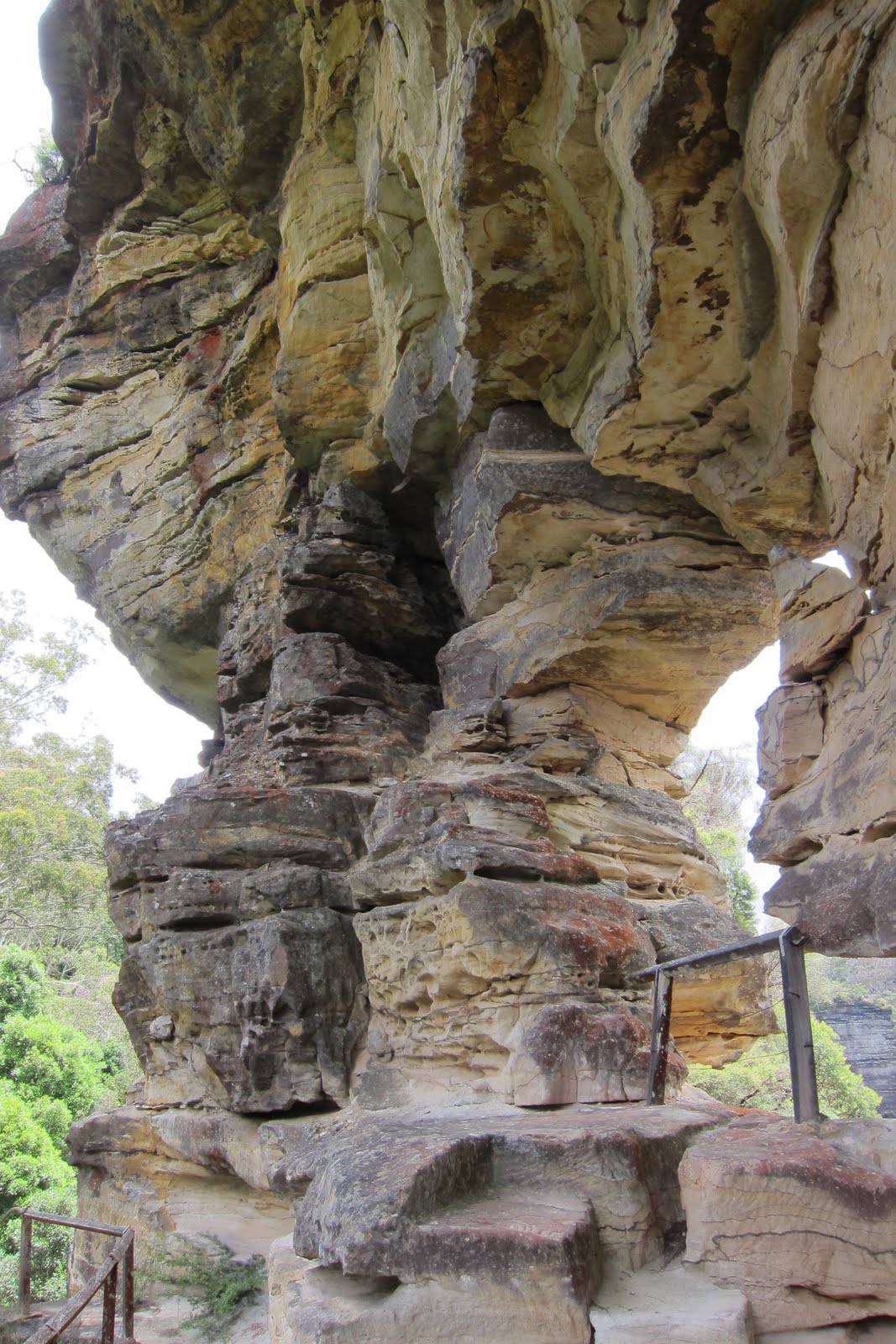 11.) We made it !!! This is the top of the Rock. We had this eerie feeling when up here all alone and knowing hardly anyone else has been here for the past 60 years! 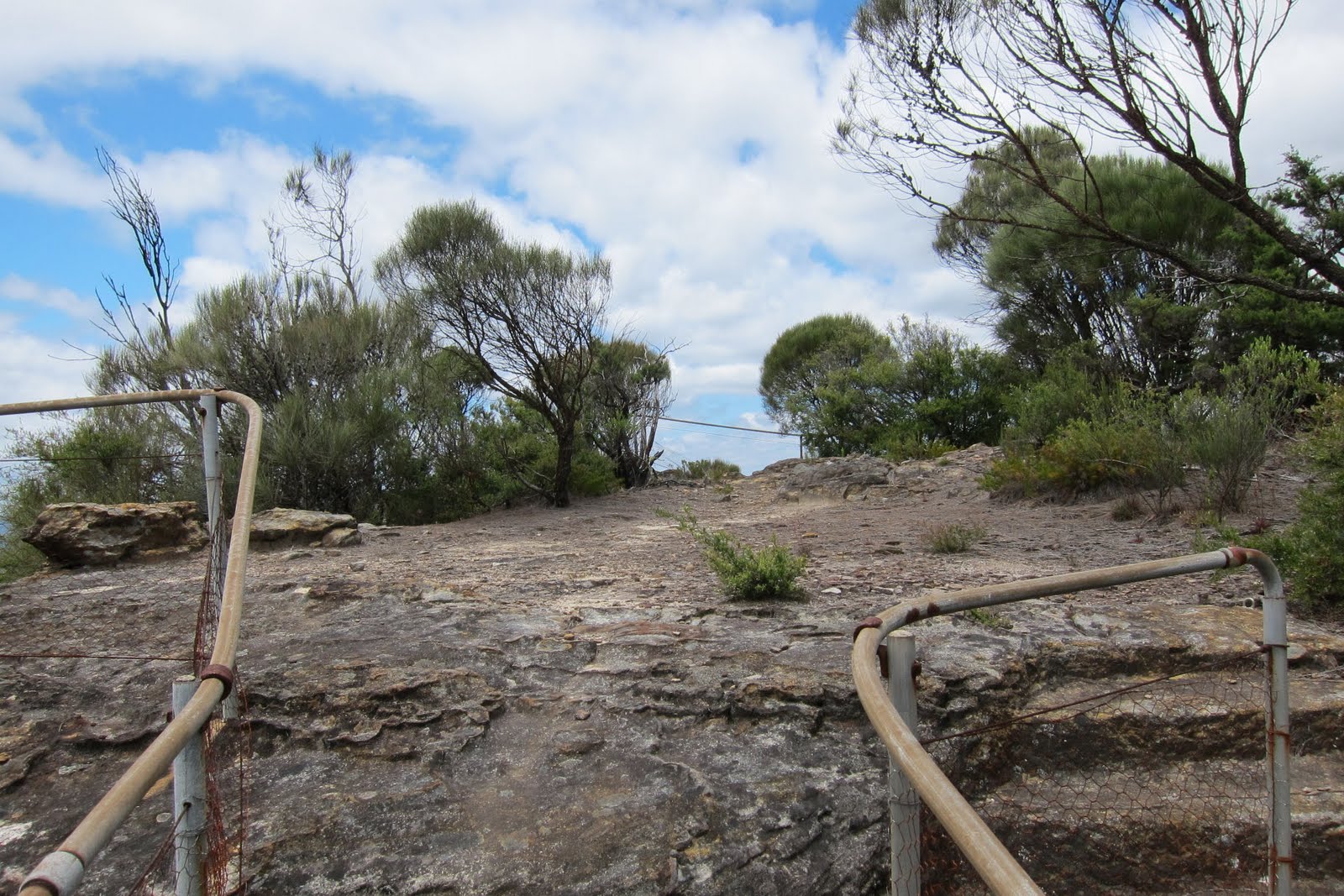 12.) View from the top of the Rock is superb. The mountain range in the middle of this pic is called Mt Solitary. I haven't climbed it yet. One day, I will ... watch this blog.  ( PS: Made it to Mt Solitary in October 2012.  Photos and write up of the walk is in http://mntviews.blogspot.com.au/2012/10/solitary-nsw-australia.html )

13.) Of course we just have to take a photo at the top of the Rock for memory. The Three Sisters formation is at the right side of this pic. 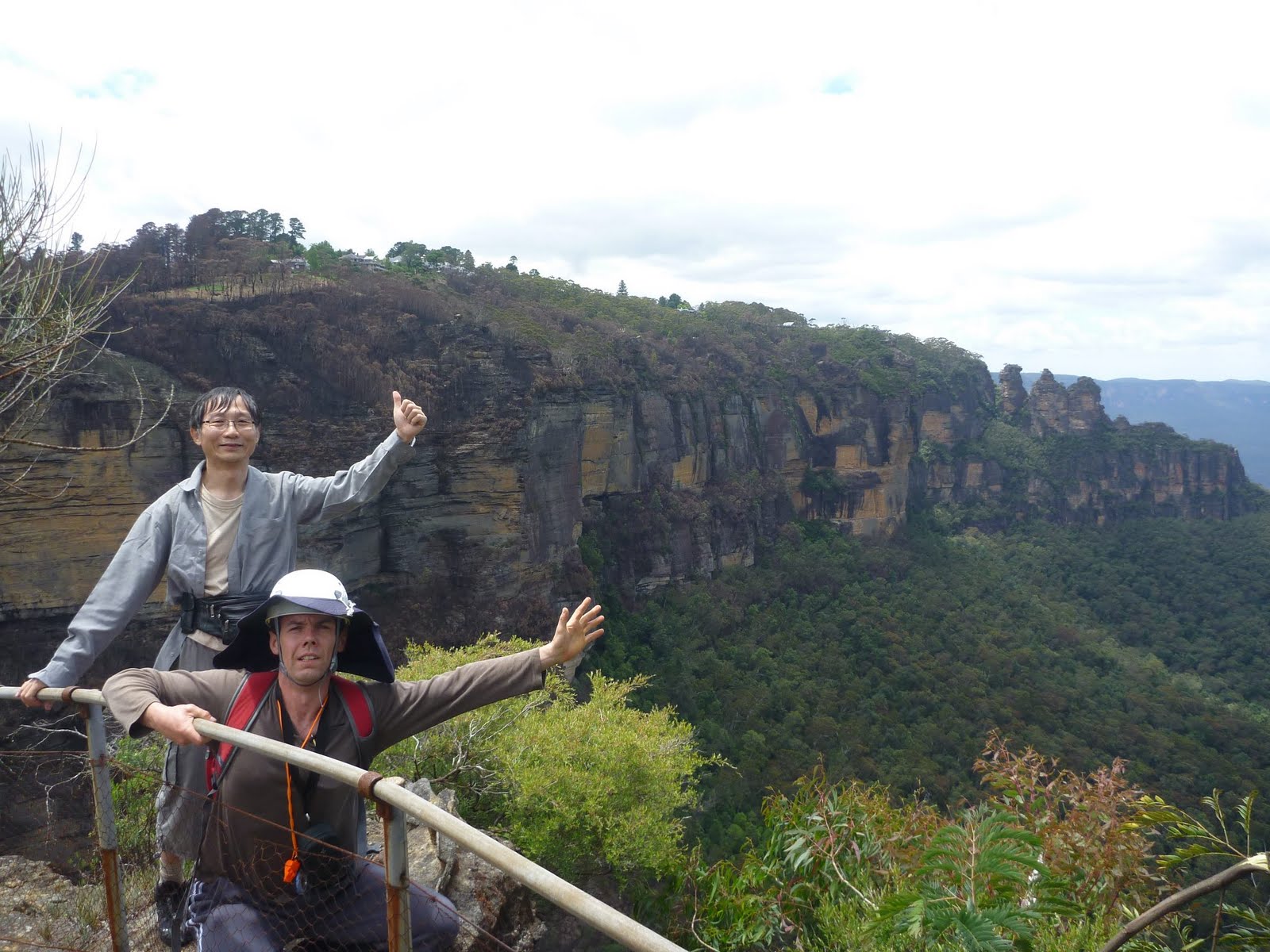 14.) Zooming onto The Three Sisters ... Nowadays, this is the main icon of the Blue Mountains. 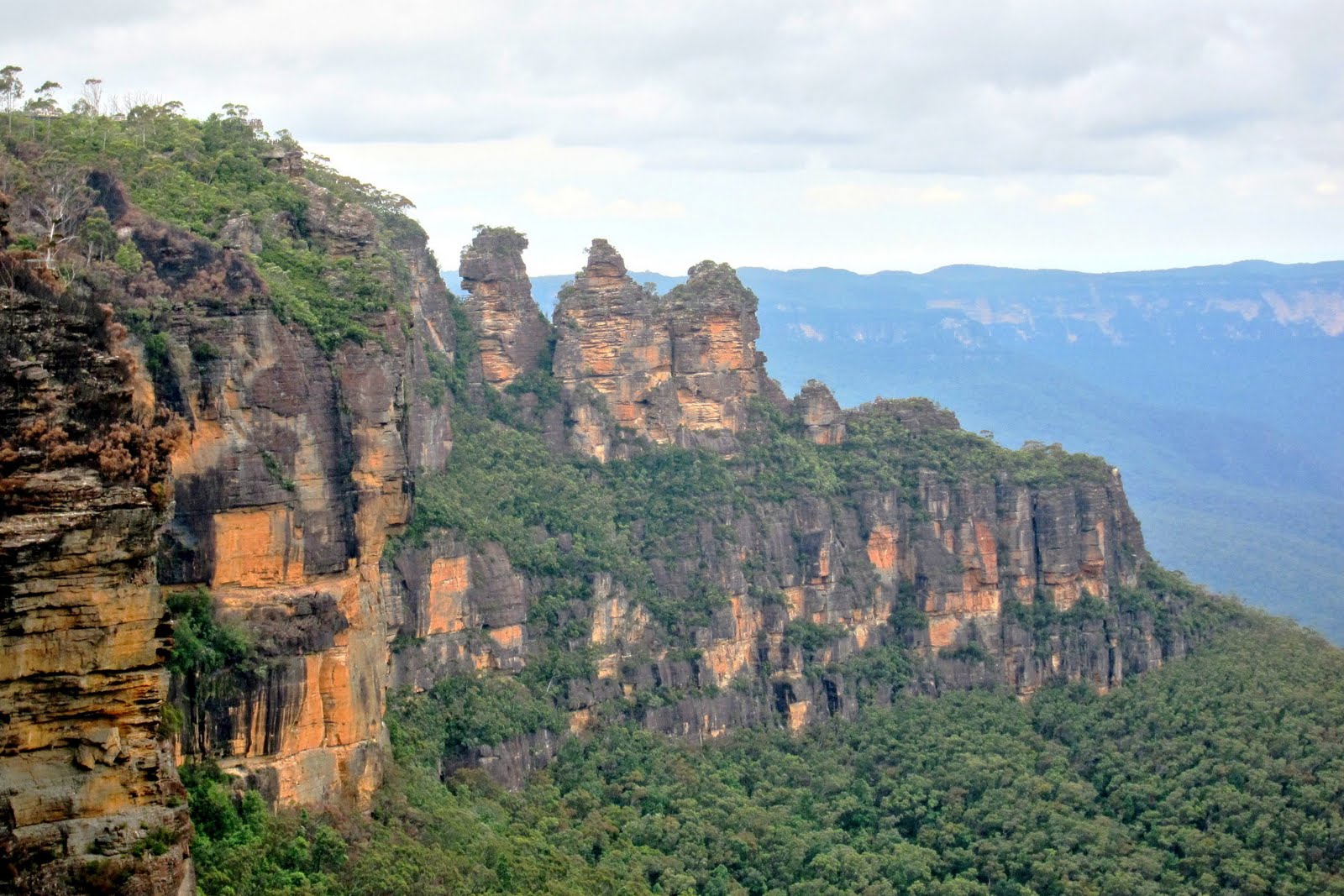 15.) Katoomba Falls and the cable car (called Scenic Skyway) - We waved to the people in the cable car and they waved back at us! I bet they would ask their tour guides on how to get onto the Rock and the tour guides would have no clue ! ... because you won't find how to climb the Rock anywhere on the Internet !!! By the way, the brown colour of the trees on the right half of this pic was not due to a fault in the camera. They were burnt in a recent bush fire. 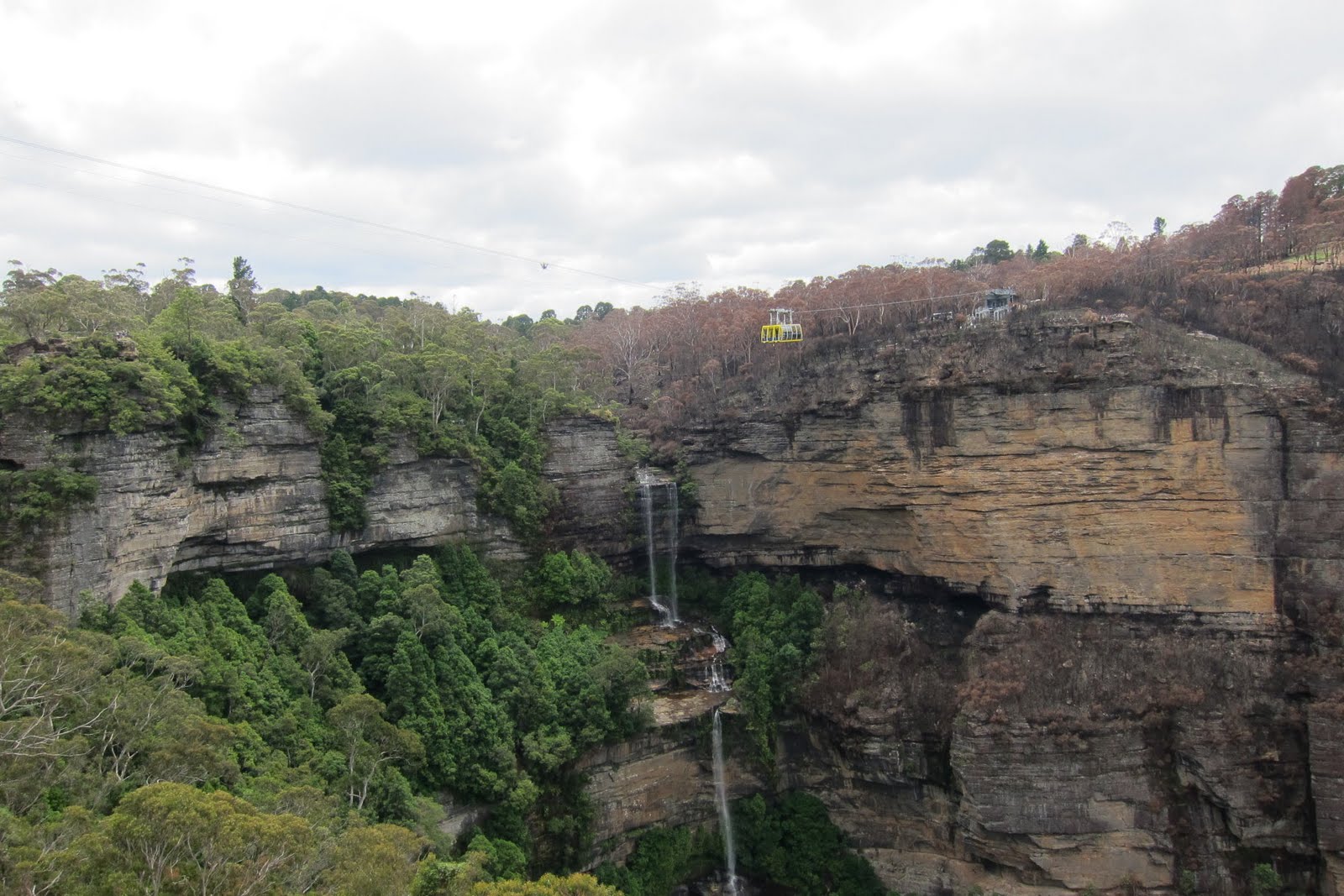 Search This Blog ... but use index is better