Mt Meharry:
- Highest mountain in WA (Western Australia)
- 1,249 meters in elevation
- In the Pilbara region of WA
- Rarely climbed, being in a remote semi-desert area.

7 down, 1 to go - Now I only have to bag Mt Woodroffe in SA to complete climbing the highest peaks in all 8 Australian States/Territories ... called State-8 peaks ... links to them are given at the end of this account.


MeHurry:
For those who don't know much about Australia, the soil in the Plibara region is extremely rich in iron.  Hence the area is full of iron ore mines.  Most of the extract is shipped to China to fuel its construction boom.  Just as well we climbed Meharry now ... call it MeHurry ... because wait any longer and the entire mountain will be shipped to China by the likes of BHP & Rio Tinto mining companies.


Hiking distance and time:
If you park the car like we did at 5.5km from the summit, then the return walk should take less than 4 hours.

As it is an easy walk on a 4-wheel-drive trail all the way to the summit, hence one should be able to complete the trip much faster than us.  Grayson likes to take videos, which explains the longer time of our walk.


Drive to the base of Meharry:

1)  On the Great Northern Highway, 340 km by car from Port Hedland, you will see a "Juna Downs" road sign pointing to an unsealed road heading towards the west. Turn into this road.  It will lead all the way to the top of Meharry. 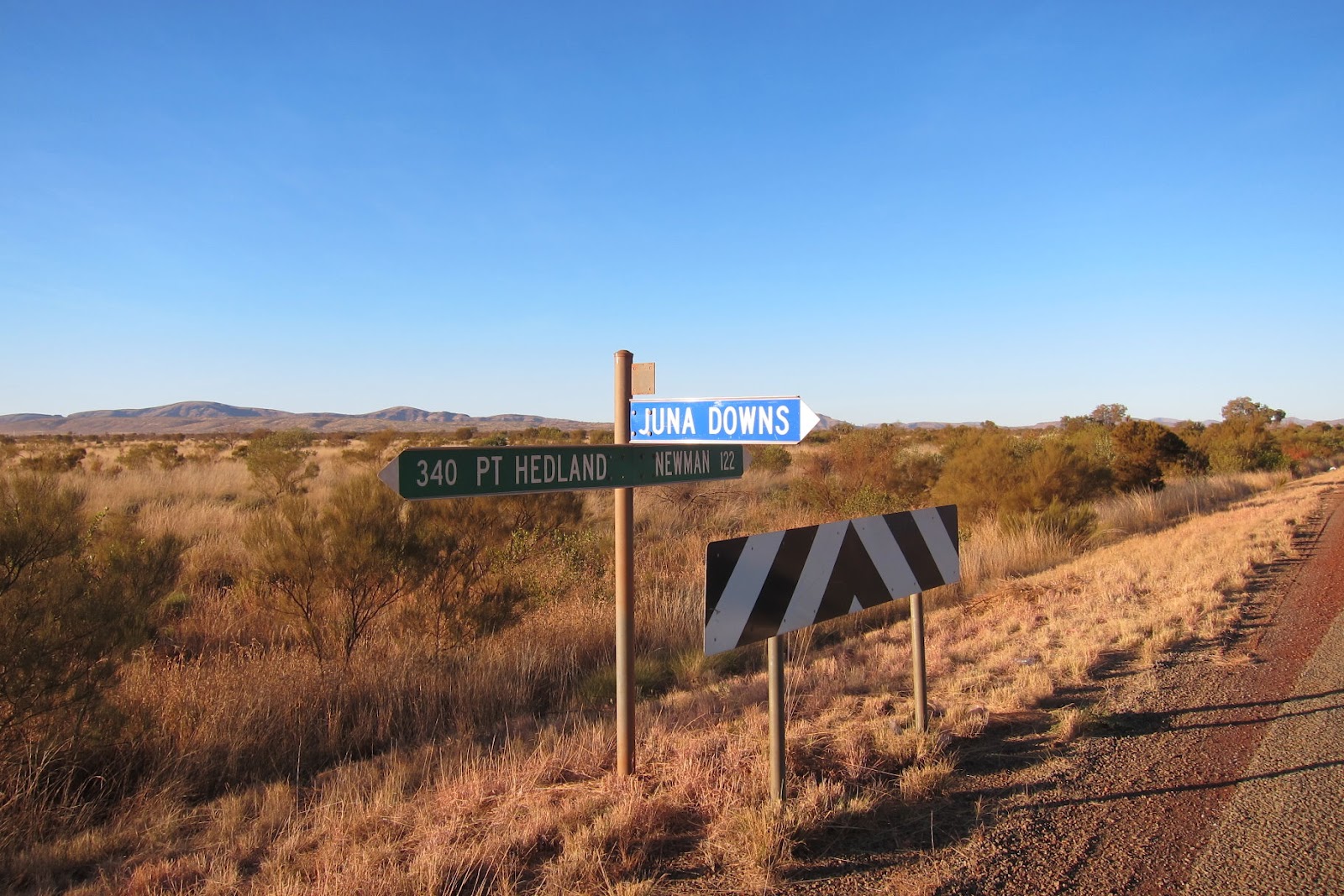 
2)  The following hand drawn sketch map by Jeremy is quite useful (click on image to enlarge it).
Jeremy also sent me this GPX file: https://docs.google.com/open?id=0B877-h5SCJaST25KaFI0eFFoX1k
Load it into your GPS and you will have no problem in finding your way.


3)  The corresponding KML file is: https://docs.google.com/open?id=0B877-h5SCJaSWGR6b3RqTzliVDQ
Display it in Google Earth and you will see the following image.  (Click on the image to enlarge it.)  The yellow line running north-south on the right hand side of the image is the Great Northern Highway.

4)  About 16 km from the Great Northern Highway turnoff, you will come across a T-junction with this sign "Mount Meharry, 4 Wheel Drive Only". 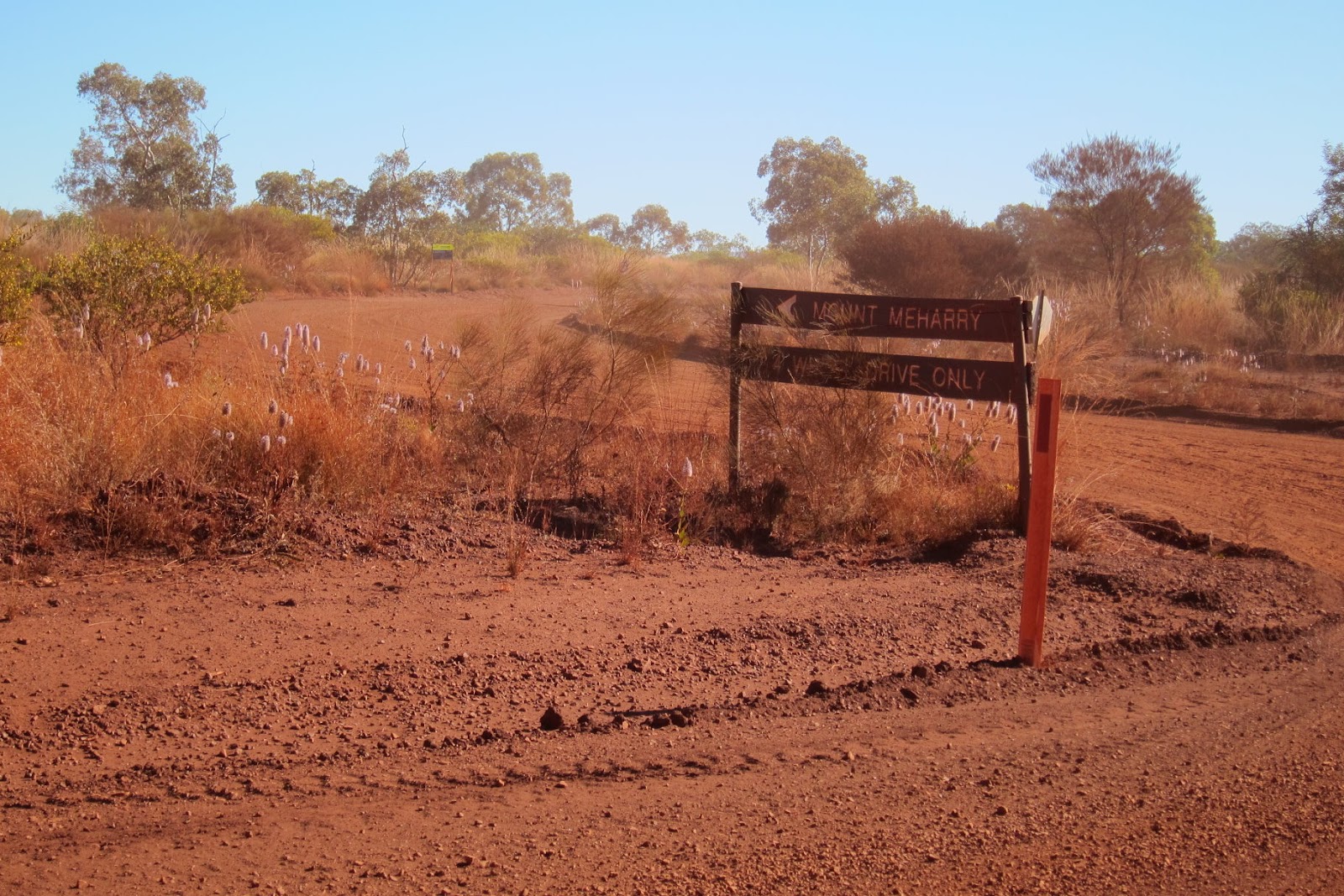 Wish I own a piece of this dusty red land.  With the iron in it, I would be multi-billionaire by now!!!

Another 5 km later, you will cross a railway line (refer to image #2 and #3). Don't even think about taking a train to here.  It is a private mining line for iron ore only.

A video of the road not long after the railway crossing is in:

http://www.youtube.com/watch?v=moz7qNmBIWY
A 2-wheel-drive car can get to within 7 to 10 km of the summit.  But as can be seen from the video, it is safer with a 4-wheel-drive because of the higher clearance between the bottom of the car and the ground.


5)  Typical landscape around this area
(The mountain in front is not Meharry - we won't see it for quite a while.) 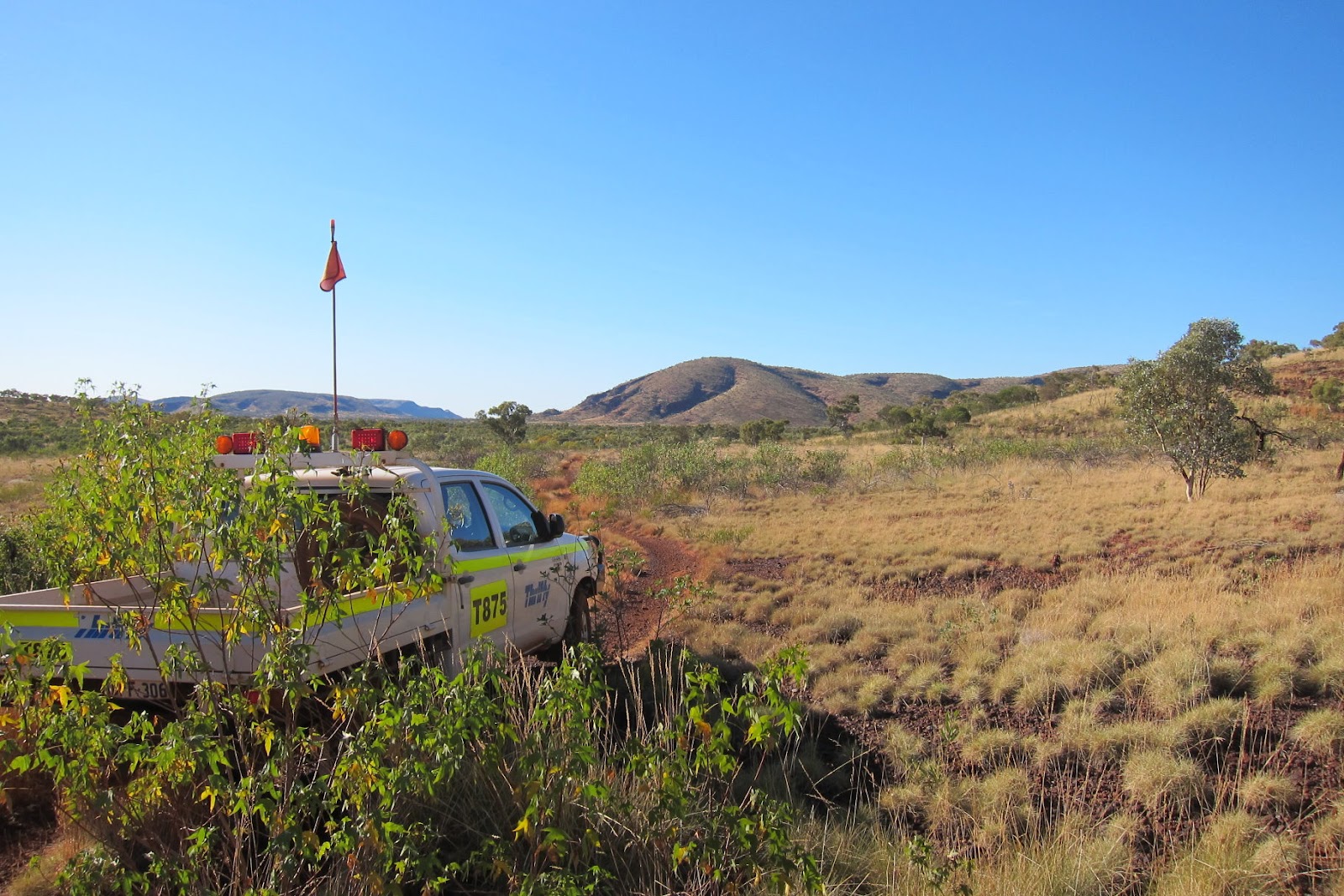 We rented the above flat-bed 4WD ute at Port Hedland. Port Hedland is a busy mining port. All other types of 4WD cars have long been rented out by all the fly-in fly-out miners. What was left was this one.


6)  About 5.5km from the Meharry summit, we encounter these metal posts. I was going to keep driving forward by going around them ... but decide to park the car here and walk instead ... 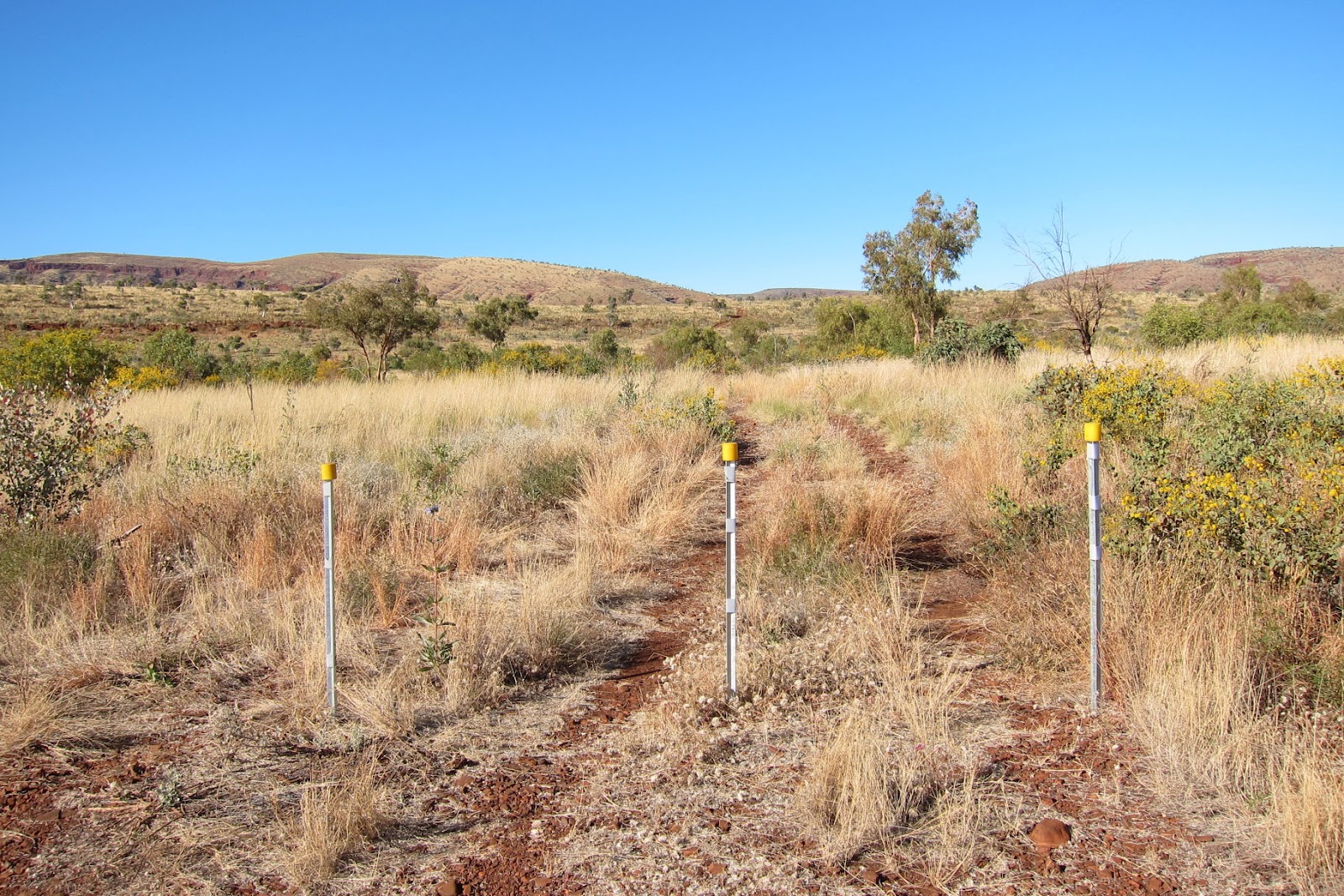 7)  ... Thank God I didn't go around the posts. Had I done it, I would soon plunge the car down this vertical bank into a dry creek !!! 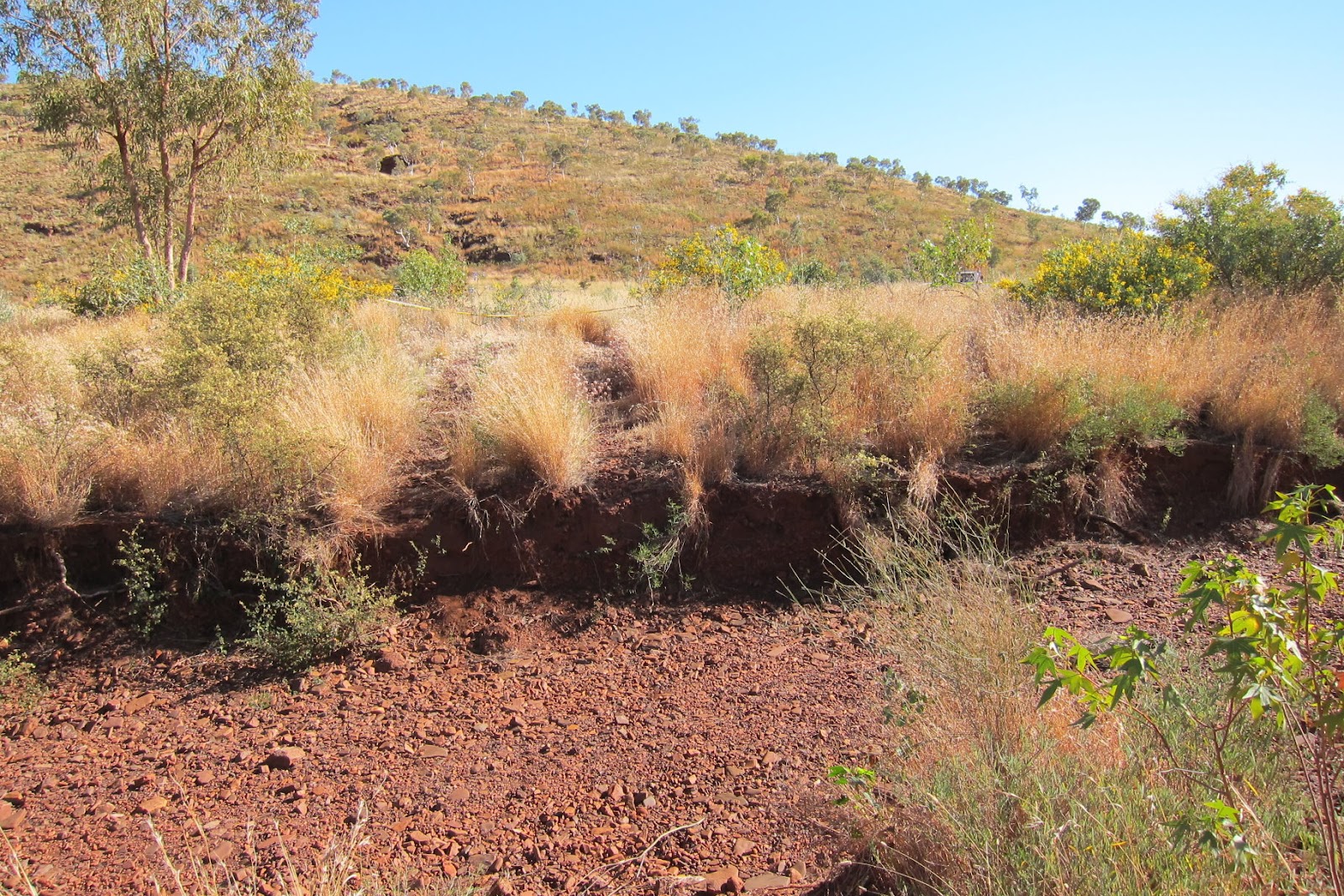 It is possible to drive along side the creek to find a convenient point to cross it.  But on a clear blue sky day like today, why not take a walk instead?


Walk to the summit:

8)  The trail gets quite rough after the dry creek.  Occasionally, a few snappy gum trees (or are they ghost gums?) dotted the landscape here and there, as can be seen from the following photo. With their smooth white trunks, they stand out strikingly against a dusty red landscape. 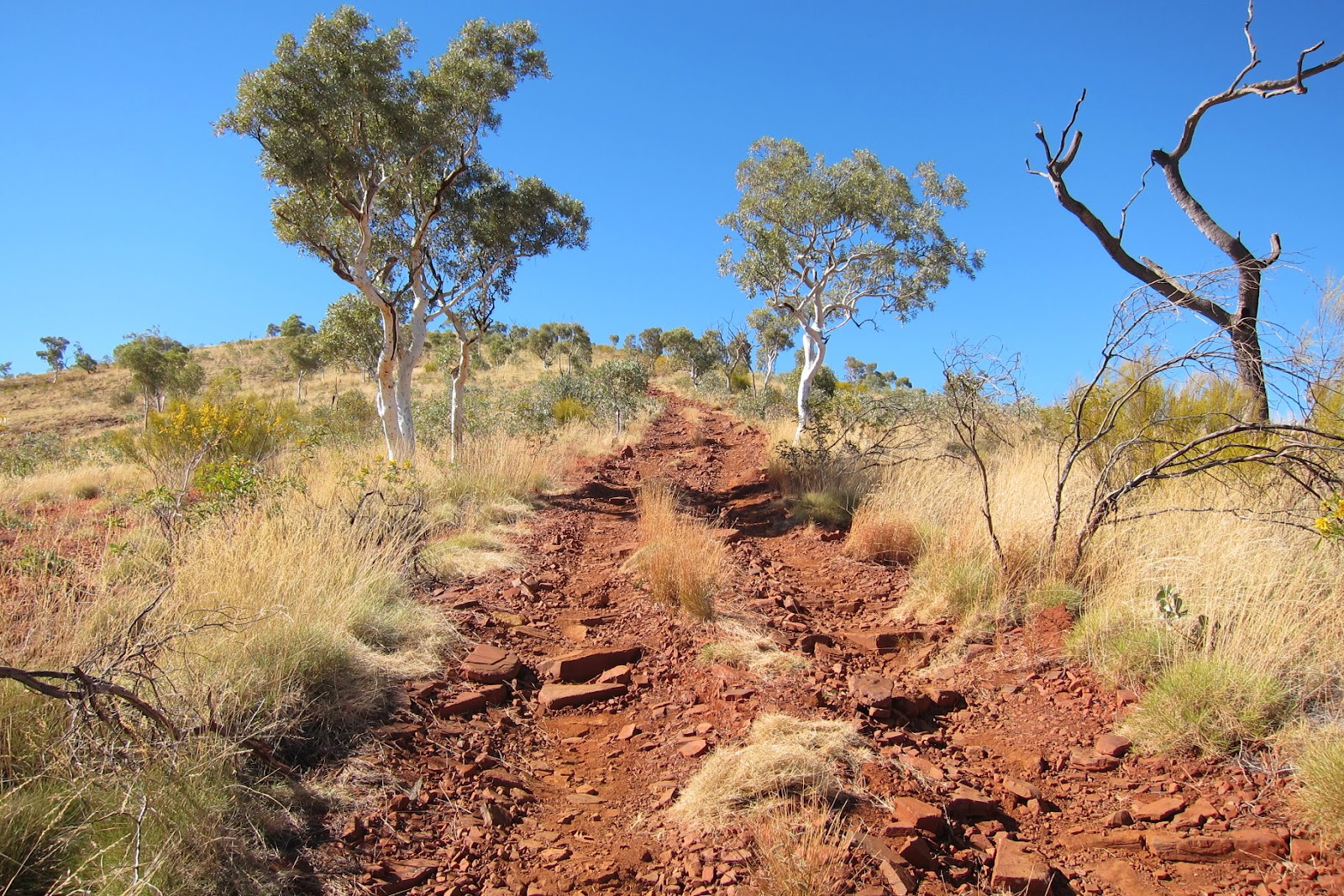 9)  On the trail, this nearby hill is constantly in sight.  It seems to be splitting into several parts. 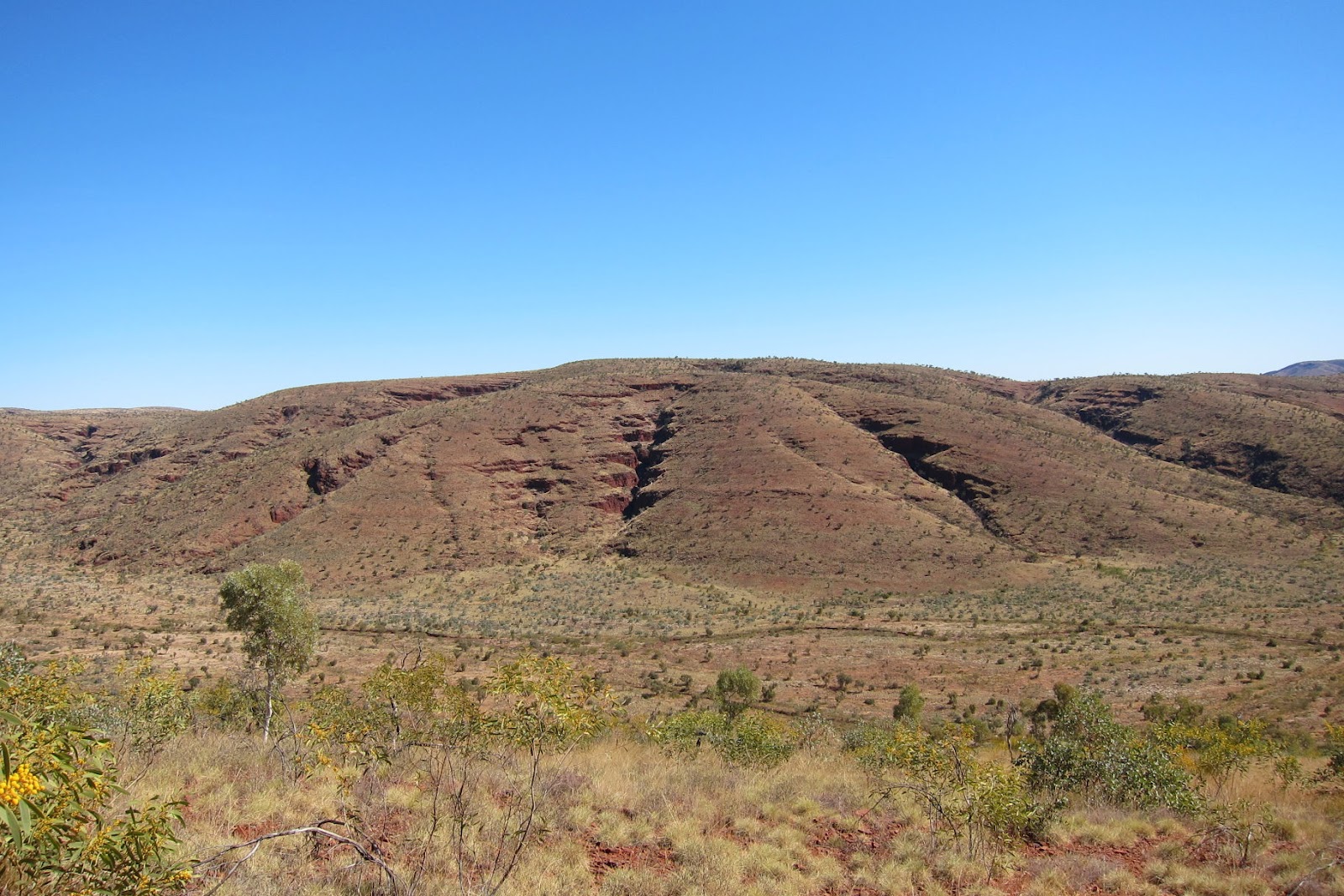 10)  At last, we can see the Meharry summit - the highest point in this pic. 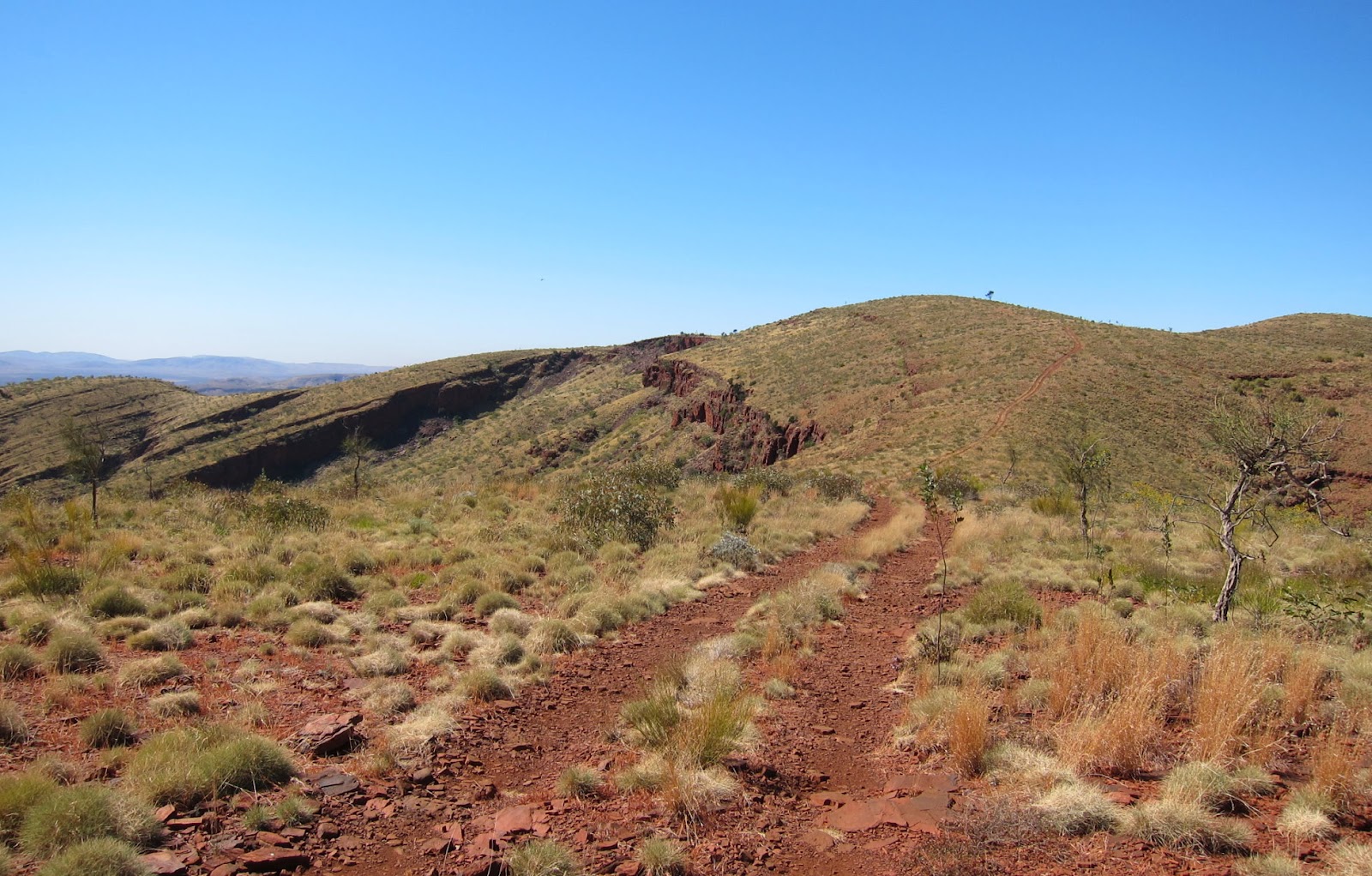 11)  Made it to the top!  1,249 meters
According to Jeremy, there is a log book buried somewhere in this cairn.  But I am unable to locate it. 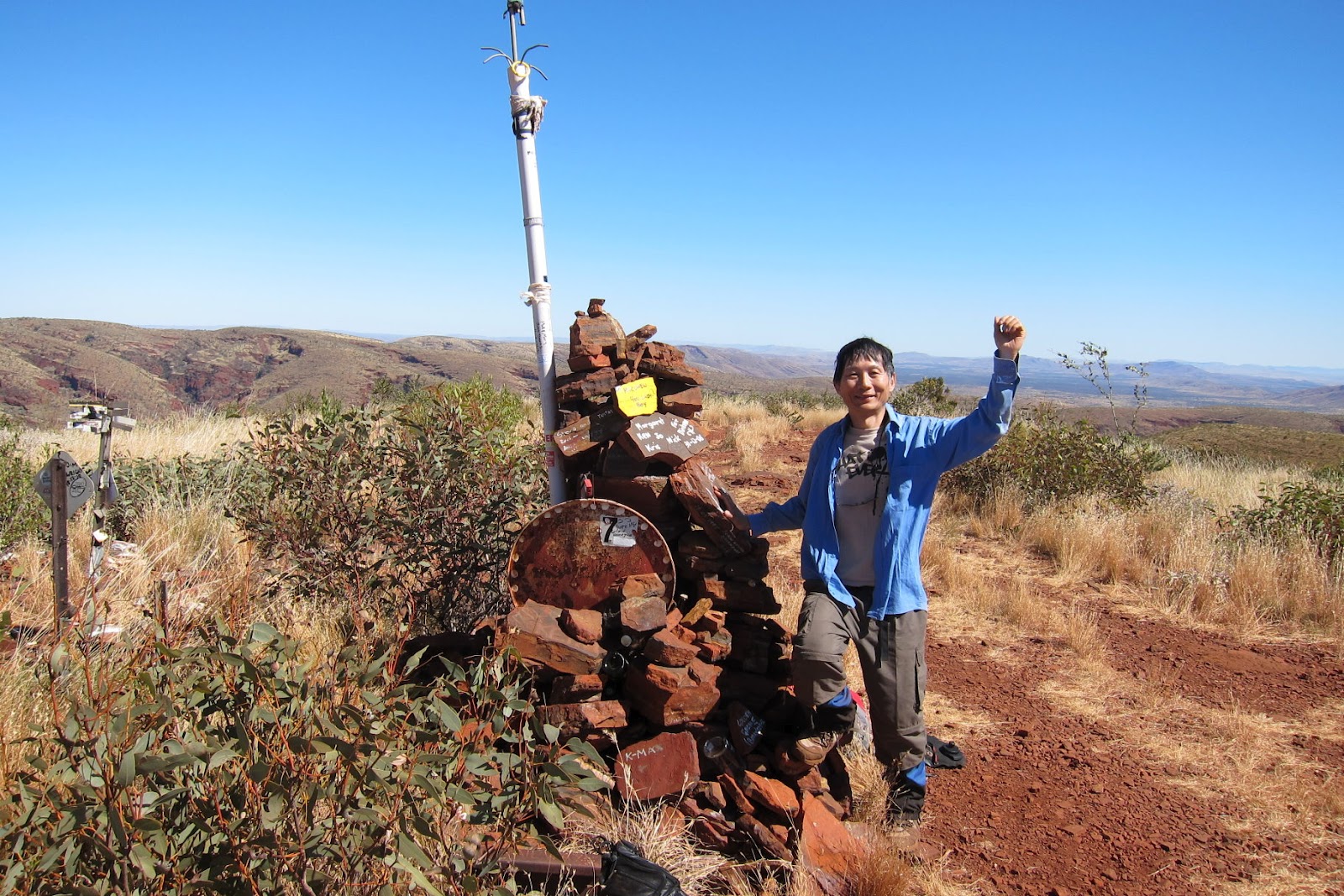 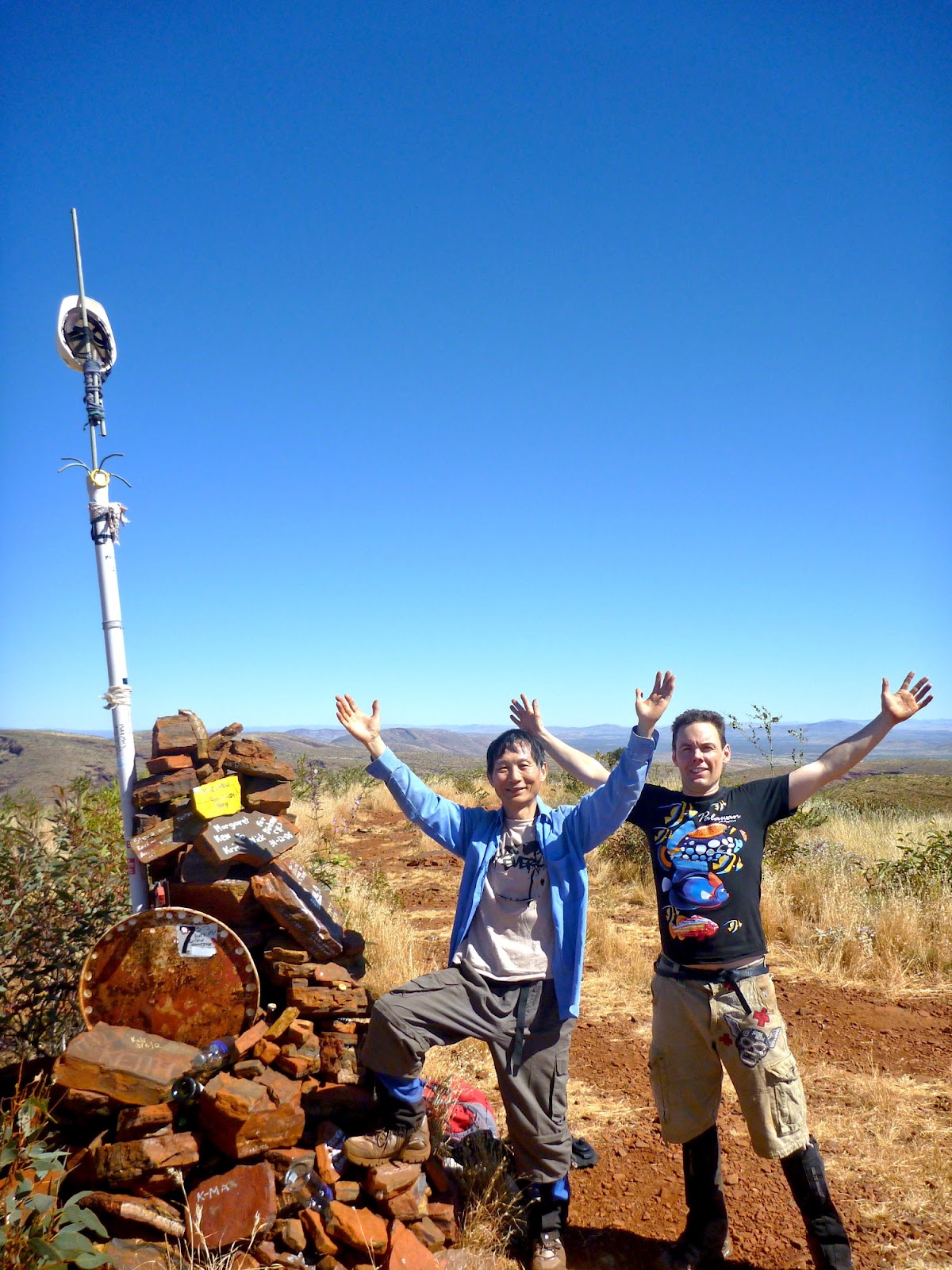 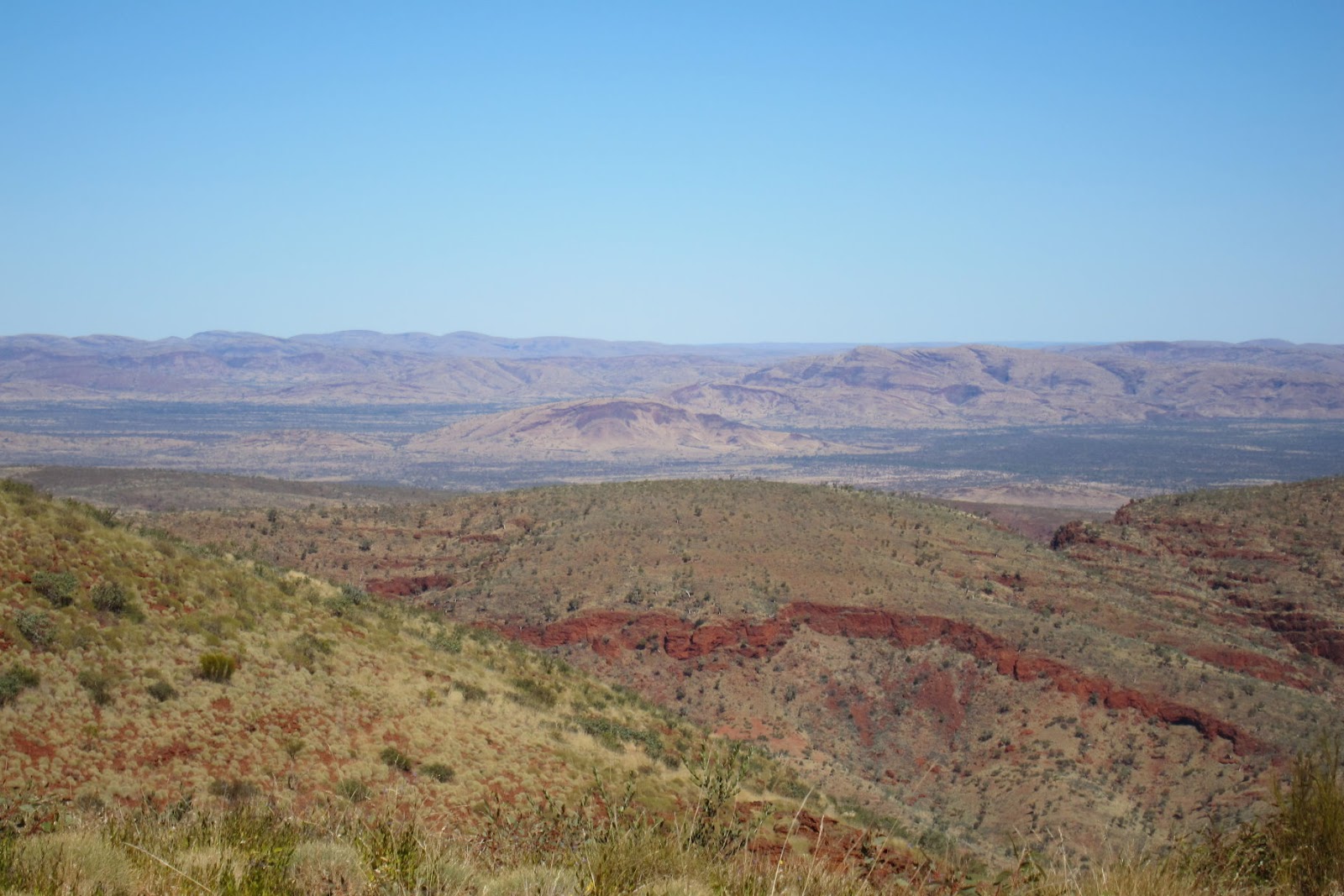 14)  The highest peak on the horizon, the far away mountain near the centre of the following photo, is Mt Bruce, 2nd highest mountain in WA. We climbed it yesterday ... check out my write up and photos in:
http://mntviews.blogspot.com.au/2012/08/mt-bruce-wa-australia.html 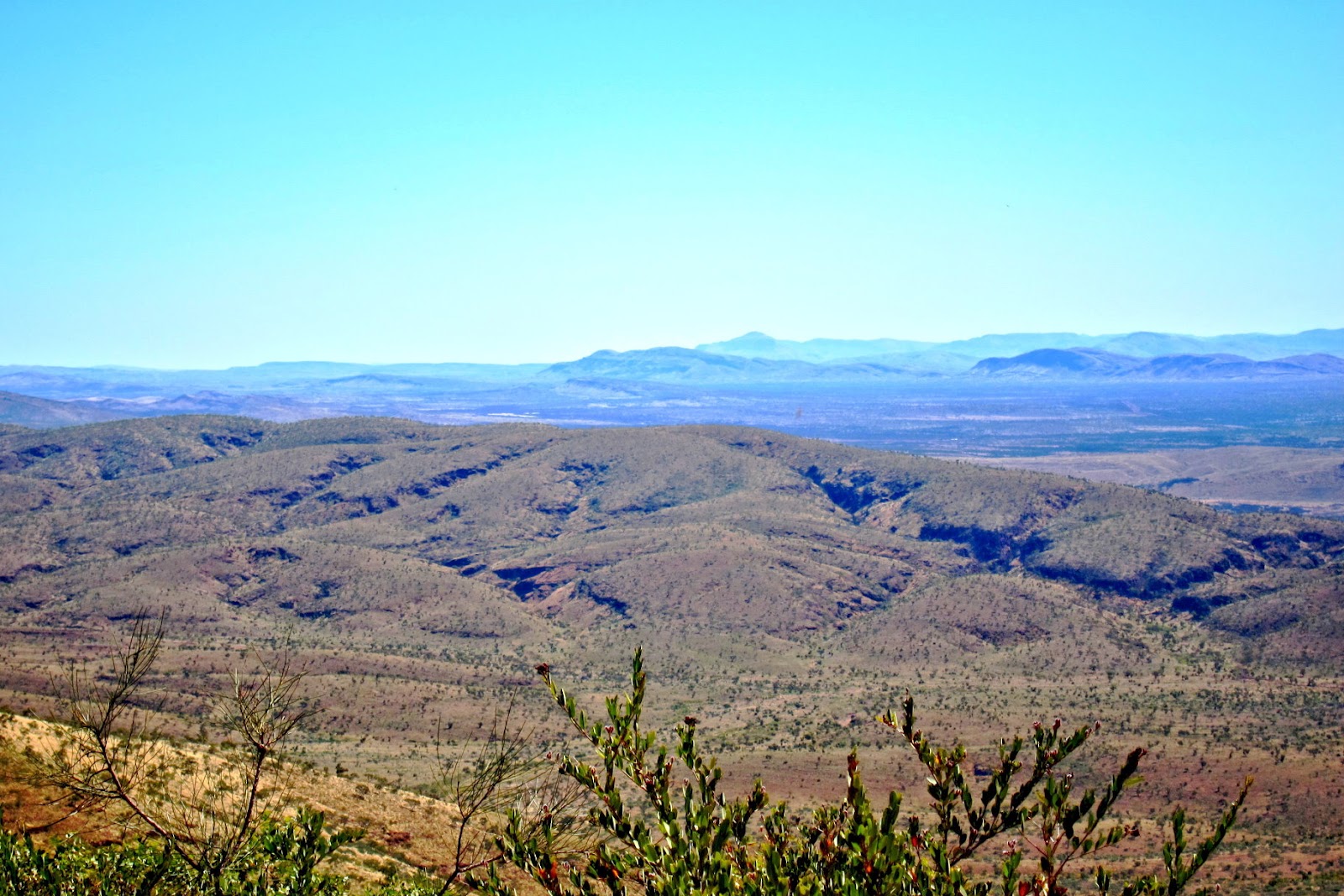 15)  We have lunch at the summit, then retrace steps to the car which is parked somewhere in the plane below. 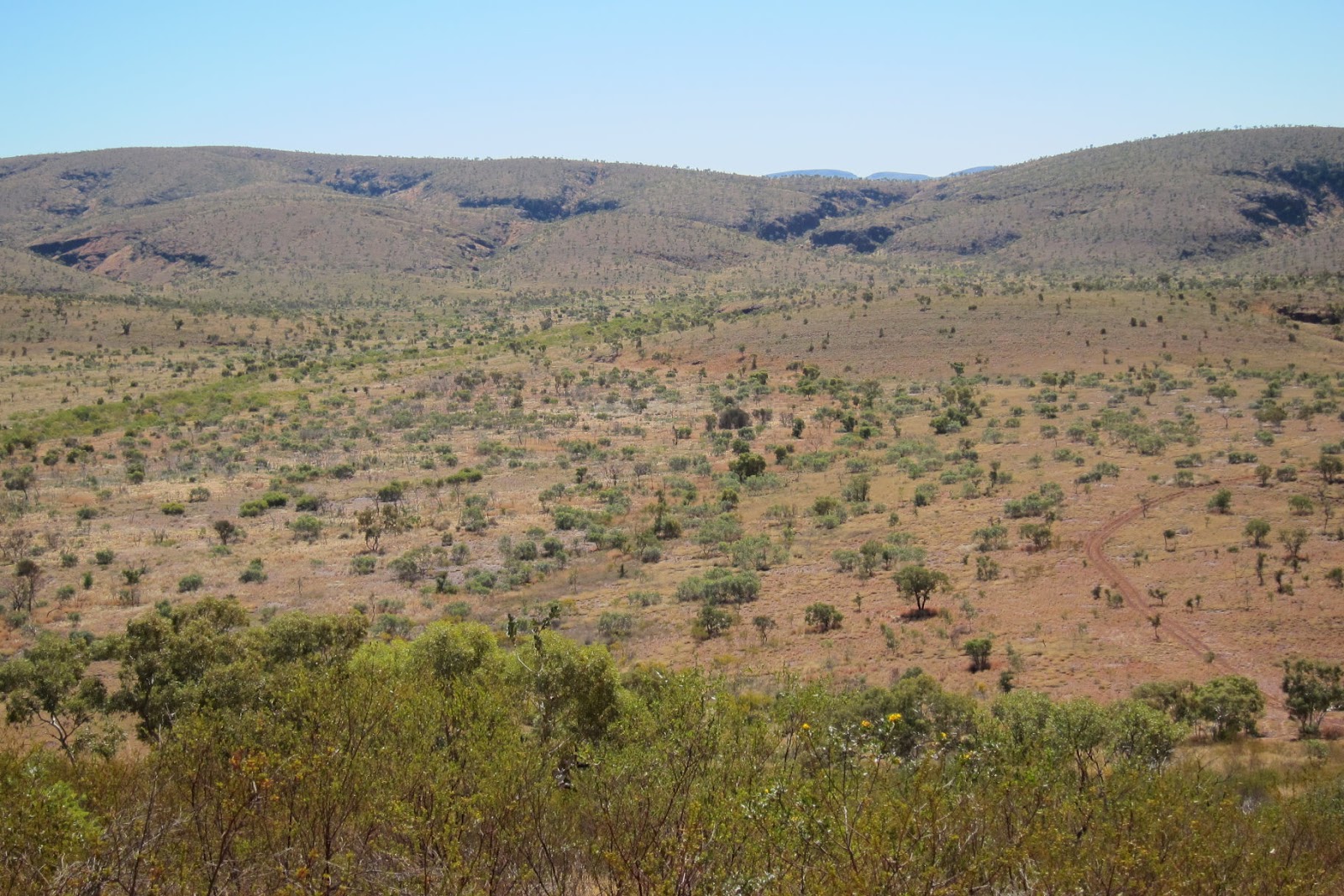 A video of 360 panoramic view from the summit is in:

There are a number of unique and pretty flowers in Meharry that I haven't seen anywhere else.

16, 17)  This Ptilotus Exaltatus, commonly known as Mulla Mulla, is particularly beautiful.  Native to the arid region of WA, it is an annual herb growing from a few cm to 1.5m high. Its flowers form many pink/purple cones or heads on one plant, making it a showy species, especially when many are found growing together over large areas. 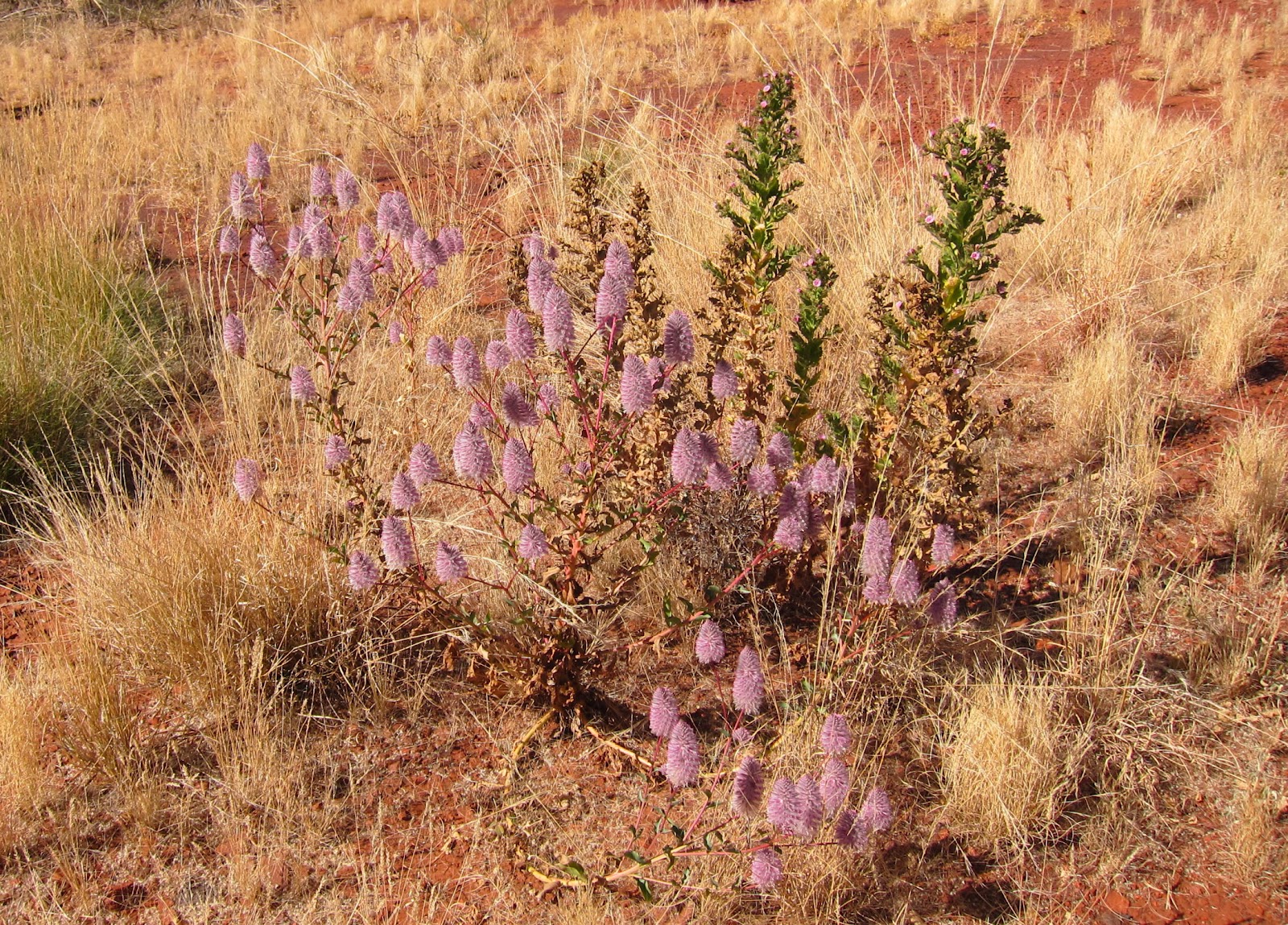 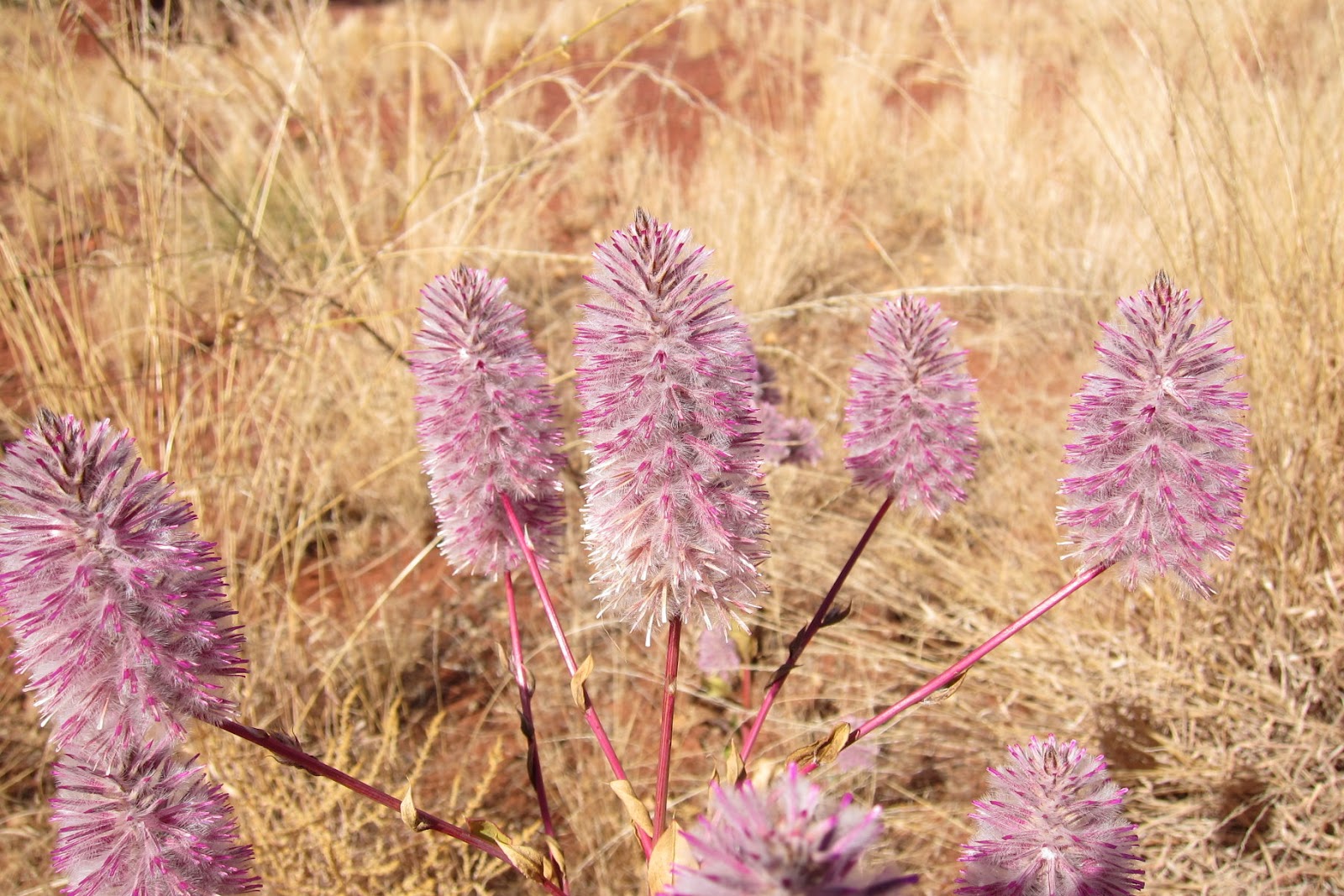 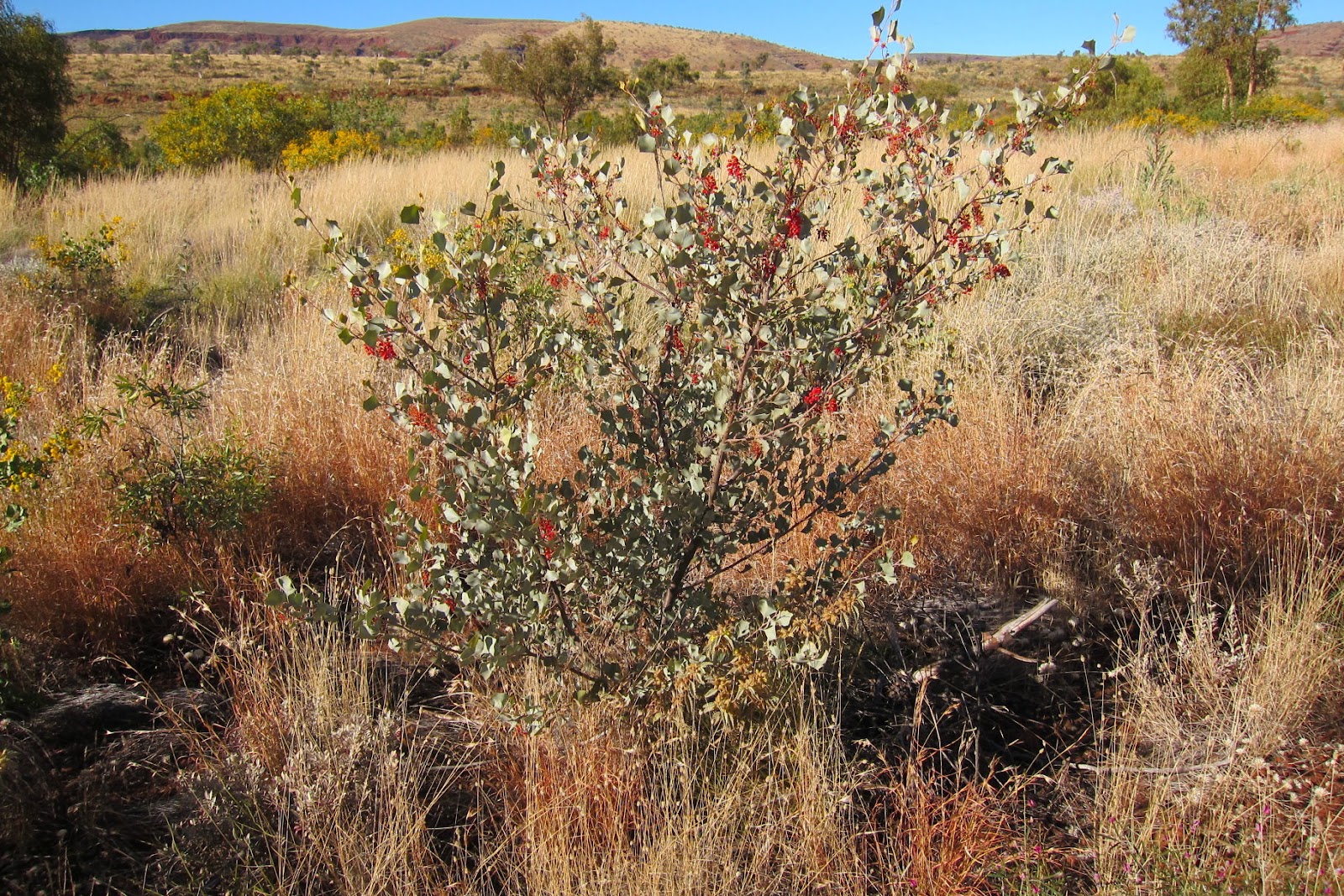 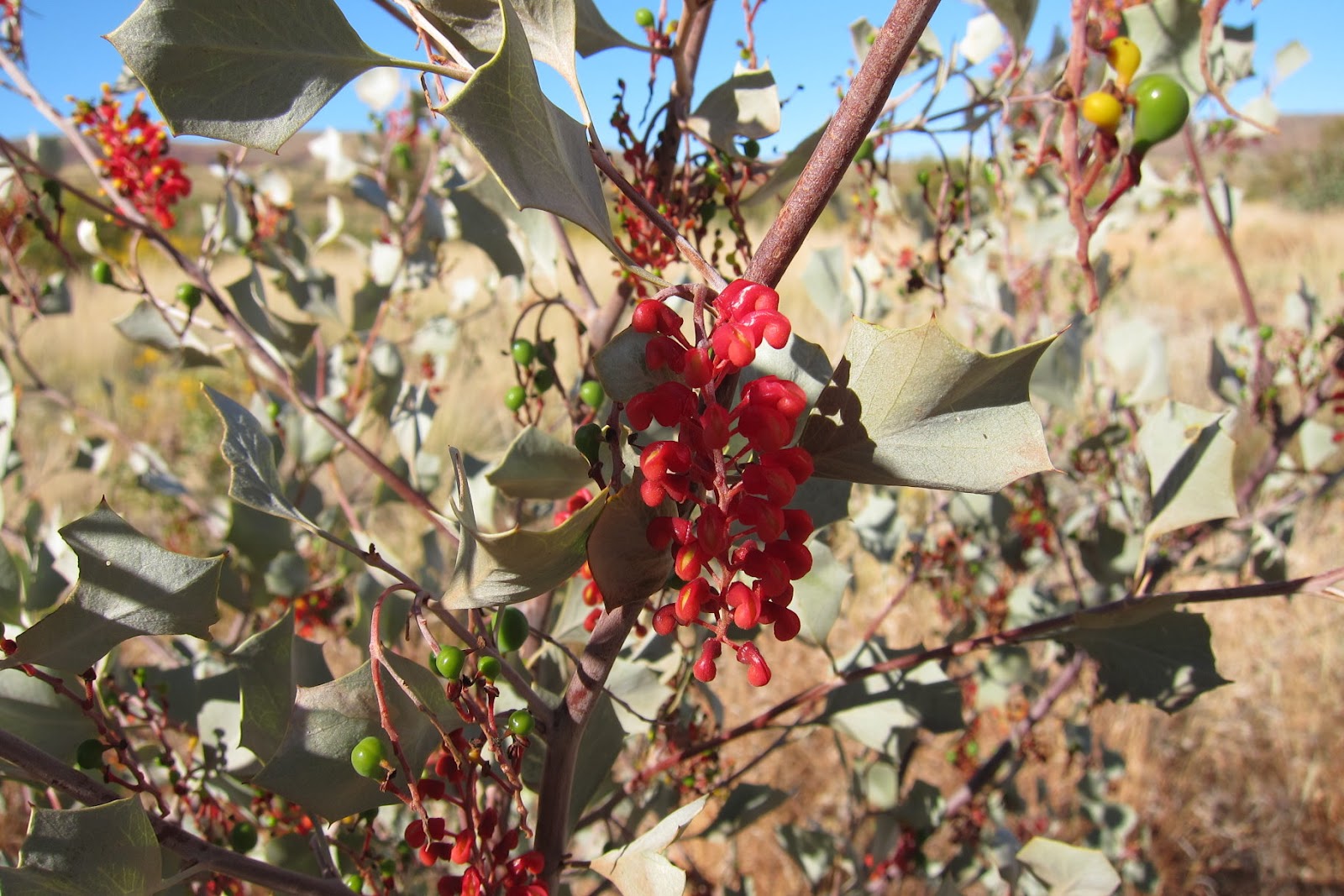 20, 21)  From a distance, this plant has a dusty and dirty appearance.  But close up, the yellow flowers are quite pretty. 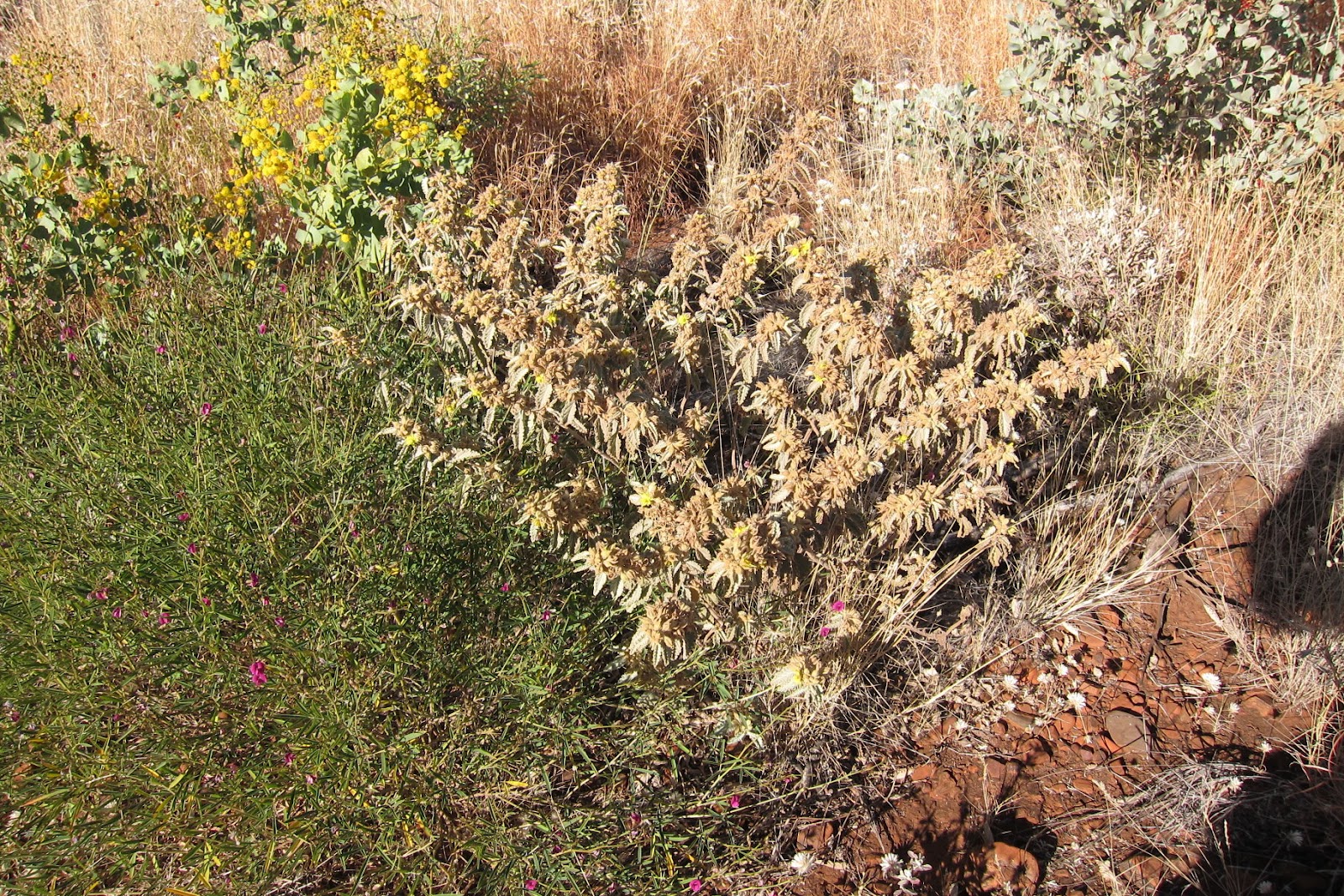 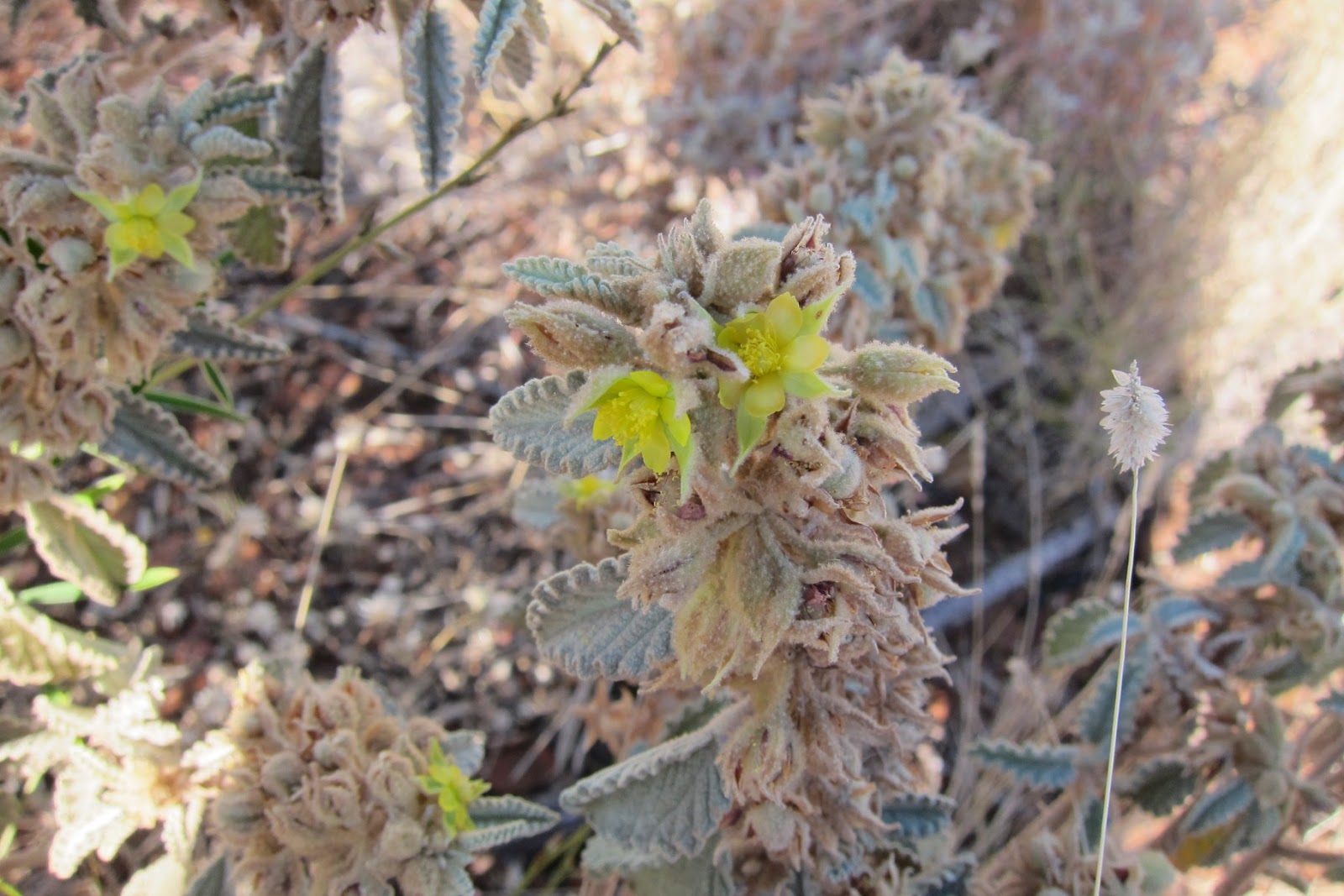 22)  This one with thorns and purple flowers ... Can anyone tell me its name? 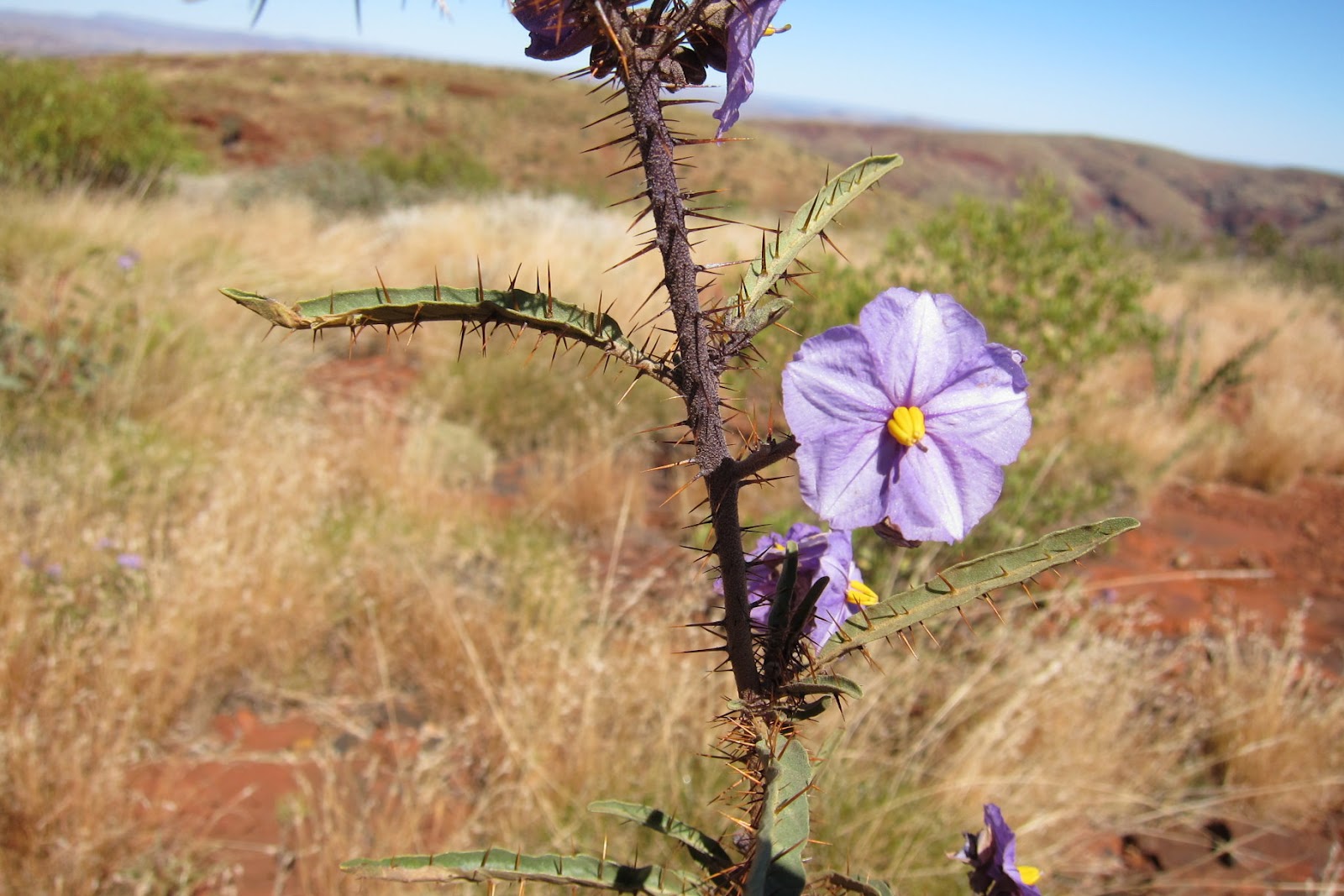 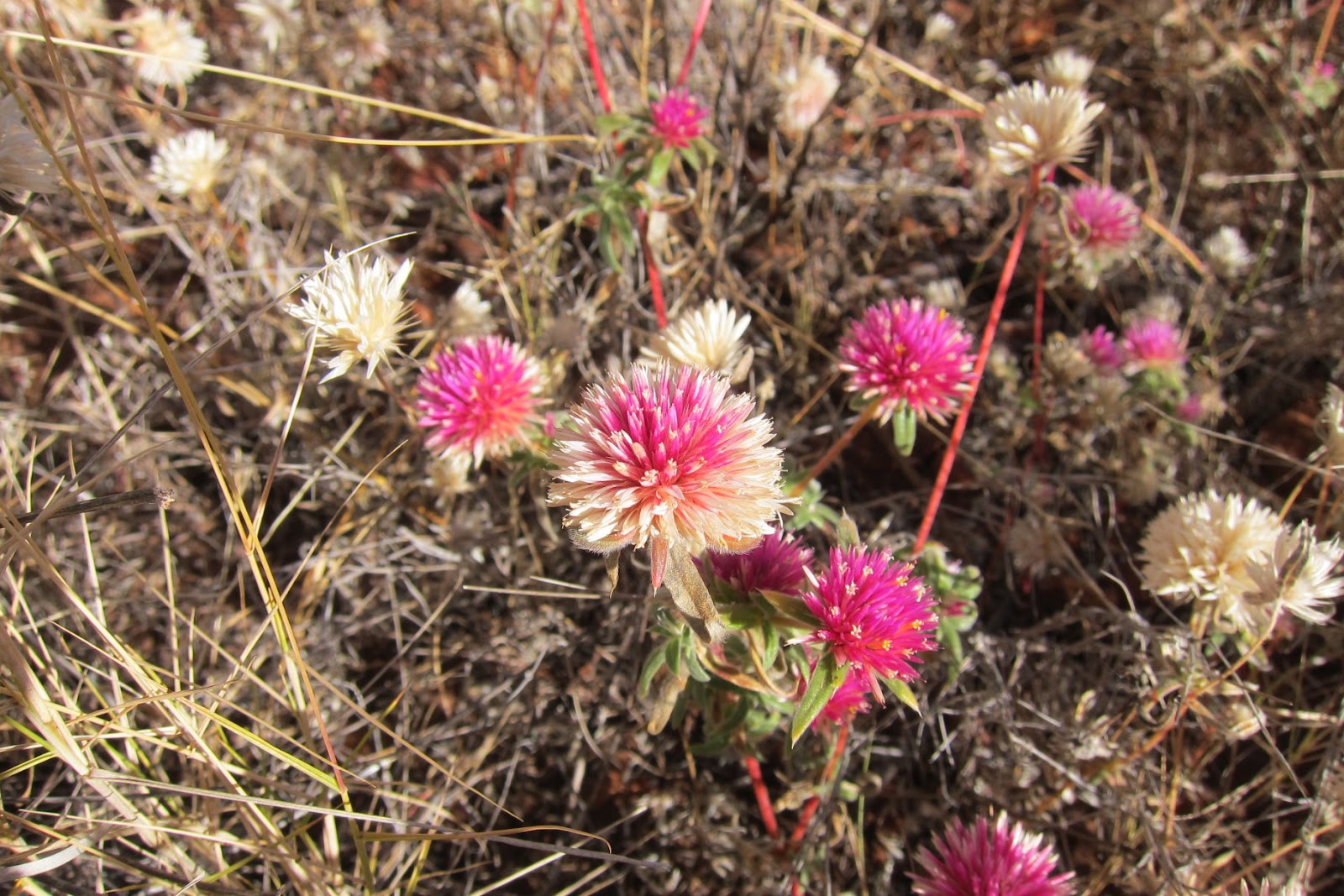 Camping out in the wild

24)  Mt Meharry is truly remote.  The nearest town is more than 100km away. So we camp out that night in the wild instead.  This site is near Mt Governor, not far from Meharry.


25)  Grayson having fun ... Luckily he didn't set the entire WA's Pilbara region on fire! The humongous torch is made by putting lots spinifex grass on a stick. 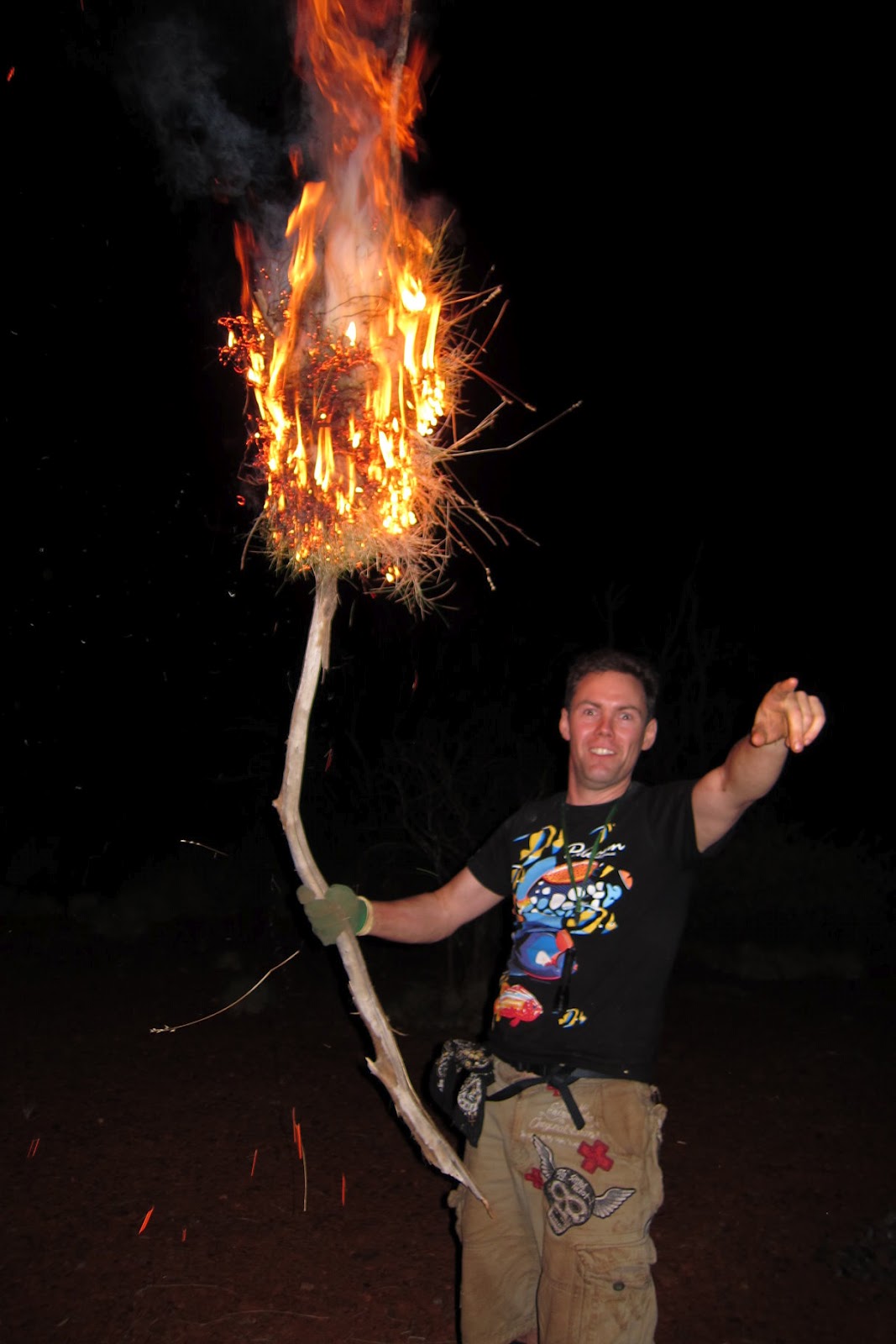 Links to the other 6 of the Australian State-8 peaks that I have climbed:


Post script !!!:
- 2013 May, climbed Mt Woodroffe in SA
http://mntviews.blogspot.com.au/2013/05/woodroffe-sa-australia.html
This completes my mission of climbing the highest peak in every Australian States/Territories.