Go to Index
(Unbeknownst to me, some of my chess games are on the internet ...
http://www.chessgames.com/perl/chessplayer?pid=146565
Who put them there???)

Hurray!!! last month, I was awarded the title of International Master by ICCF Congress. I had been a chess nut since high school. Unfortunately, my only major success so far was Under-18 Queensland State Champion eons ago. University, then work and other priorities took their toll. Hence it was very satisfying to get this title under my belt just when I was about to retire from chess completely.

Looking back, this silly game on 64 squares had given me much pleasure.  Of the many games I had played, 4 stick out in my mind:

2. Best draw - Against P Lehikoinen, CCCA-70 Grandmaster Tournament, 1991.
Lehikoinen is a formidable Grandmaster. He has a website: http://www.dlc.fi/~pele/ura.html

By the way, all the CCCA-70 games can be downloaded from this site: http://cccachess.ca/downloads.htm ... When you are in the website, look for the event "CCCA-70".

3. My only win against a grandmaster, G C Van Perlo, in CCCA-70 Grandmaster Tournament, 1991.
(Van Perlo is the author of a splendid book called "A Comprehensive Guide to the Sunny Side of Chess Endgames".)

Here are the 4 games: (White to play)
All this is book up to now. Many games have been played from this position. (A) 13 e5 leads to interesting firework but eventually fizzles out to a dead draw. (B) 13 Bf3 and (C) 13 Nxc4 are well analyzed and about equal. Hence if White wants to get out of well trodden paths, he has to try something new. Steffen Zeuthen in his monumental book on Modern Benoni suggests (D) 13 Bxc4 which, at the time, has not been played.

13. Bxc4
So White tries this new move which wins a Pawn and hangs on to it. 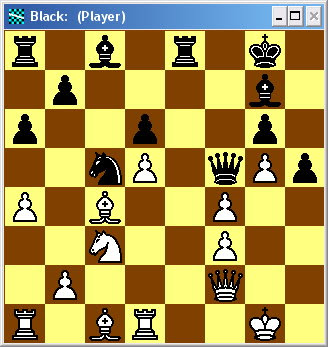 (Black to play)
Now if you are Black, what would you do? Black can set a trap for White to fall in. Can you see it?

Now, can you see the tactical combination coming up? 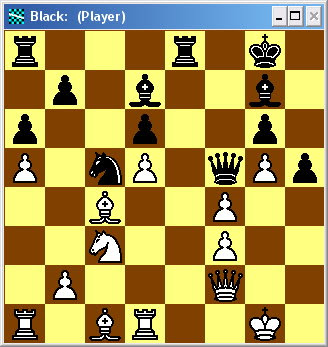 (Black to play)
22. ... Bxc3 !
White must have got a shock after seeing this. It is like a bolt from the blue. I'm quite proud of this move as you need to see it a move earlier on.

36. Kc2
This is the only save squre for the poor King. 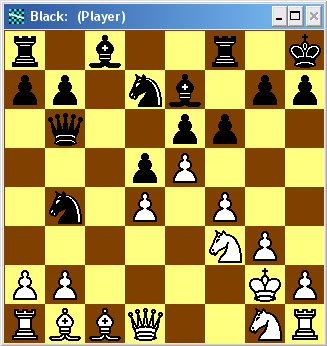 Not much better is 15...f5, because White has 16 g4, initiating a strong attack on the King-side. (White to play)
I feel ok at the time because I overlook white's next move. 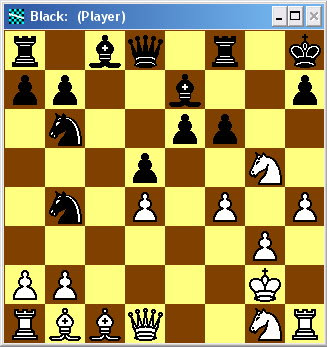 (Black to play)
Ouch! I am going to lost the h Pawn as well as having a wrecked King-side!!! (Needless to say, it is suicide to take White's Knight at g5.)

But I should know better. Ng5 is a move that is always on the cards in this line of the French Defence.

I spend a lot on time here on my reply. Not because Black's move is hard to find. In fact 17...Qe8 is more or less forced to prevent Qh5 by White. I am debating with myself whether it is worthwhile to continue with the game or simply to resign and be done with it.

But the more I analyse it, the more I find Black's position is quite good. I can develop the pieces quickly whereas White can't. And if I can break through with ...e5 quickly enough, then White will be in trouble due to his airy King-side position.

20. N5h3
This and the next two moves by White are designed to keep open the d1-h5 diagonal for White's Queen. 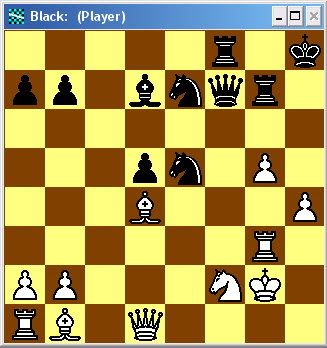 (Black to play)
In one sense I am disappointed in not winning this game as I have the initiative through out the middle game yet couldn't break through White's airy King-side. In another sense, I am glad of the draw after losing a Pawn in the opening ... getting away with a draw against a grandmaster is pretty good.

3. My only ever win against a grandmaster:

Now, the usual way for White to play in this position is g3, h3 then g4. I decide to try something new, because Pawn pushing is not my style. 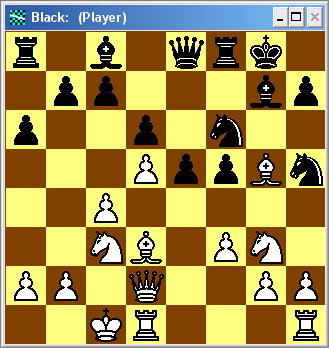 (Black to play)
Compared to 14 g3, my move puts pressure on Black immediately.

14. ... Nxg3 ?
Oh dear!!! This ought to be counted as a big blunder. Opening up the h-file is suicide. One can almost write off Black now. 14...Qg6 looks yuk, but it holds everything as I can't find any immediate break through for White.

15. hxg3 Nh5 ?
I don't understand this. What is he trying to achieve? Van Perlo may be a Grandmaster, but he is playing like a little kid.

Of all the innovations I have played, the one against Booth stands out, because it turns a hitherto bad line for Black into a playable one. 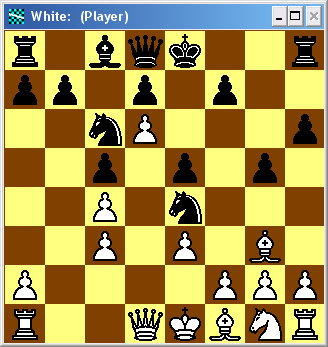 (White to play)
Theory considered this position as bad for Black because White wins a pawn by his next move. But I have an innovation up my sleeve!
11. Bxe5 Nxe5
12. Qd5 Qf6
13. Qxe4 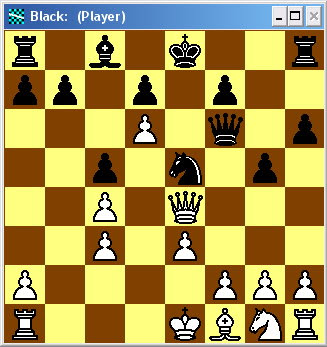 (Black to play)
This line (starting from 10...Ne4) is considered bad for Black because 13...Kd8 has been the only reply, and after which Black's Rook at a8 is hemmed in, unable to get into play. White is probably rubbing his hands in glee at the prospect of chalking up a win. But he hasn't counted on my innovation, 13...OO !

13. ... OO !
The point being Black's King is quite safe on the K-side even though the Pawn structure there is ragged. Now, Black has a better development as compensation for the Pawn.