Prologue:
The plane from Perth to Port Hedland was full.  Almost all the passengers were men - flying-in fly-out mining workers ... some were wearing helmets and safety vests with fluorescent stripes ... sort of like business men wearing suits flying out to another city for business deals.  I had the fluke of being seated next to 2 women.  You may think this was lucky.  But they were muscularly built, with faces that looked more like men than women ... made me feel like being suffocated by 2 dominatrices.  Glad when the plane landed at Port Hedland I was able to escape out of their way.

For those who don't know Port Hedland ... it is in the Pilbara region of WA (Western Australia), and is a mining port for the 2 giant mining companies BHP and Rio Tinto.  Jeremy (the guy who climbed Mt Zeil with me last month) was right.  He warned me there is absolutely nothing in Port Hedland, and warned me about its vast expense of flat red dusty plains.  The red earth is rich in iron, good for BHP and Rio Tinto.  But the flatness is a death knell for us mountain baggers.  So, after I met up with Grayson at the airport, picked up a flatbed 4-wheel-drive ute, we were glad to be out of the city and headed for Tom Price, a small town near Karijini National Park, for the night.

The Pilbara is so sparsely populated that not a single town exists between Port Hedland and Tom Price, a distance of 420km.  On the other hand, we passed a number of mining sites right at the side of the highway.  Judging by the red earth, the whole Pilbara can really be one giant iron ore mine!

The mines seem to operate 24-hrs non-stop ... because we reached Tom Price at 11pm, and along the way, the mines that we passed at night all had lights shining as bright as sunlight with mining vehicles bristling back and forth.

About mining trucks ... many are 4-truck trains (5, if the engine truck is counted).  Some travel at close to 110 km/hr - the road speed limit.  To overtake one of them seems to take forever.  And considering our car was on the wrong side of the road at night during the overtake, it seemed scary.  In fact, it scared the shit out of Grayson.  But we reached Tom Price with all limbs intact and ready to climb Mt Bruce the next day.

Really nice scenery on the walk to the summit ... highly recommended for all hikers.

On Mt Bruce: Download KML file from this site:
https://docs.google.com/open?id=0B877-h5SCJaSX0c0TVJxTnNvNEU
Then display the file in Google Earth. When in Google Earth, zoom right in and you'll see a well defined walking trail from the carpark all the way to the summit.

1.) The corresponding interactive map is displayed here.  Click on any of the green icons to get its description, or zoom in to see more details (click on the small "+" icon). If you click on the "Sat" icon on top right hand corner, zoom right in and you'll see a well defined walking trail from the carpark all the way to the summit.

Hiking distance and time:
10km hike from Mt Bruce carpark to summit and back.
5hrs 15min of leisurely walk for us, but one should be able to complete the walk much faster.

To Mt Bruce carpark:
2.) On the way from Tom Price to Mt Bruce, we parked the car by the side of the highway (Karajini Drive) to take a photo of the mountain.  We rented this flat-bed 4-wheeled-drive ute at Port Hedland.  Port Hedland is a busy mining port.  All other types of 4WD cars have long been rented out by all the fly-in fly-out miners.  What was left was this one.  It was also a manual car ... the last time I drove a manual car was about 25 years ago!  As it turned out, it wasn't too hard to adjust to it.


3.) Mt Bruce.  Don't even think about taking a train to here.  It is a private mining line for iron ore only.


The walk to the Summit:
It is a short walk on a well defined trail to the summit.  Half-a-day should be sufficient for a return trip.  Despite its shortness, it is a very interesting walk as the scenery is first class.  If you are any where near the Karijini National Park, make an effort to climb Mt Bruce ... highly recommended.

Near the foothill of Mt Bruce is Marandoo open pit iron ore mine.  You have a clear view of the mine site along the way to the summit.  When we were there, there was a long train entering the mine.  It is about 2 to 3 km long.  In the Guinness Book of Word Records, the longest train in the world was set on June 21, 2001.  A BHP iron ore train in the Pilbara was 7.353 km long ... see
http://www.youtube.com/watch?v=9LsuNWjRaAo

Along the way to the summit, there is a short section of bare-hand rock climbing, definitely not for the faint hearted.  The rock climb leads to the top of a hill (not Mt Bruce summit) where there are 2 tall cairns built right on the edge of a cliff.  Seems to be the work of a daredevil who had too much spare time with nothing to do.

But the cairns set an interesting background for photographs.

From the hill top, it is not too far to the Mt Bruce summit which is marked by another cairn ... an enormous one ... one of the biggest I have seen on any mountain top!

Photos:
4.) On the walk to Mt Bruce summit, this good-looking conical shaped hill called Chinaman's Hat is constantly in view.

5.) Mt Bruce summit is the highest point in this pic.


6.) Further along the trail ... To reach the Mt Bruce summit, first need to climb up to the top of the hill in the front. As can be seen from the cliffs near the top, some rock climbing is required.  Also if you download the photo and enlarge it, you can just see 2 cairns at the top of the hill ... more on the cairns in photo #11. 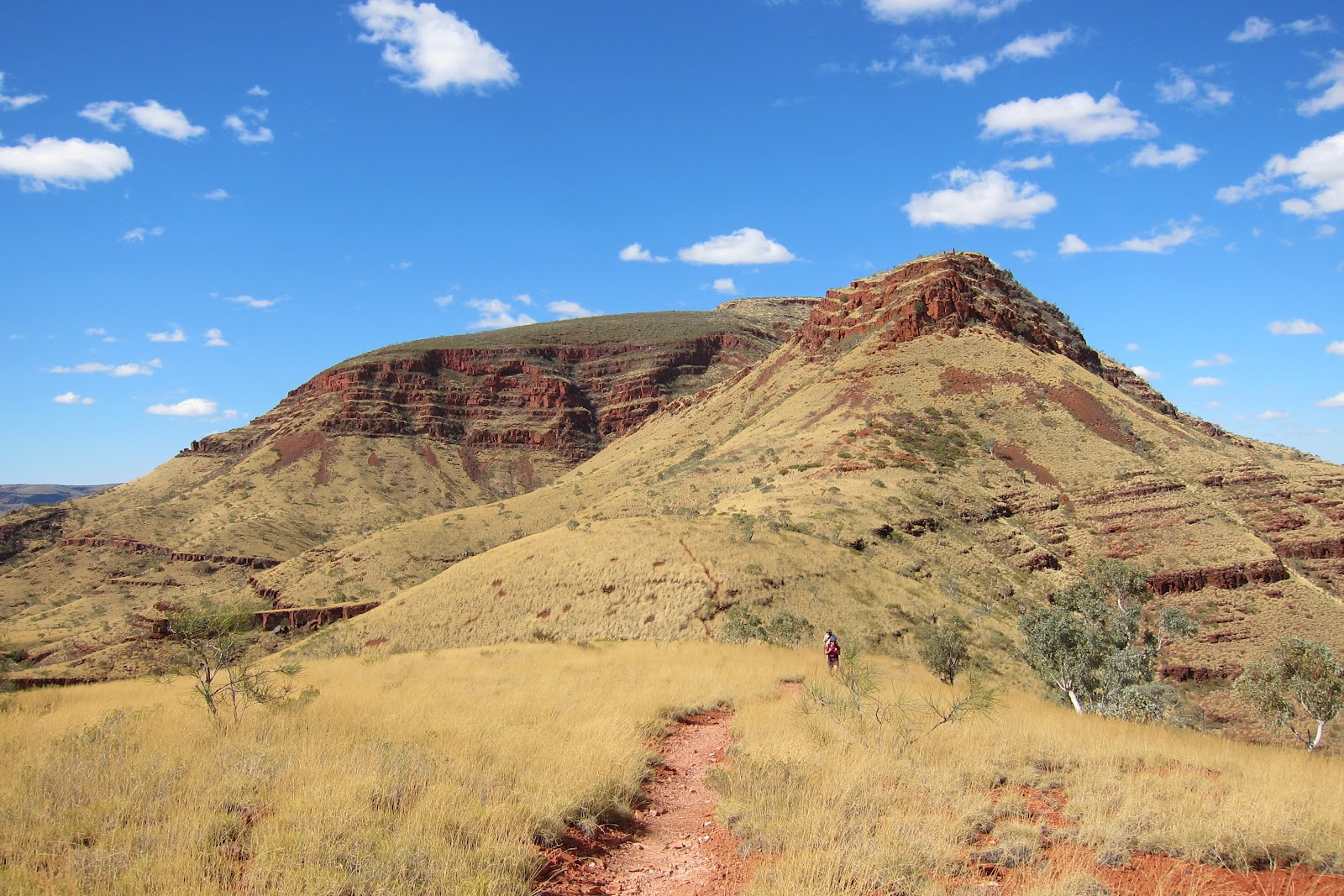 7.) Climbing up the hill now ... You can see the chain on the rock face ... it means the climb is getting scary!  The gap between the 2 rock cliffs is where we'll be doing some bare hand rock climbing ...

8.) ... Here is the gap between the 2 rock cliffs of the previous photo. No chain to help you here. The photo doesn't show it ... this is a dangerous climb, as one slip and you'll fall a long way down to the bottom.  An idea of how far you will fall can be gleamed from the next photo.

9.) You can get an indication of how far you will fall if you slip ... a looong looong way down!!!  If you are afraid of height, Mt Bruce is not for you.

10.) In this video, Grayson makes it look so easy.  But you really need to be very careful !

11.) The rock climbing leads to the top of this hill marked by 2 tall cairns.

12.) Reach the top of the hill with the 2 tall cairns (this is not Mt Bruce summit).

13.) Here is one of the cairns.  Both cairns are built right on the cliff edge.  Seems to be the work of a daredevil who had too much spare time with nothing to do. 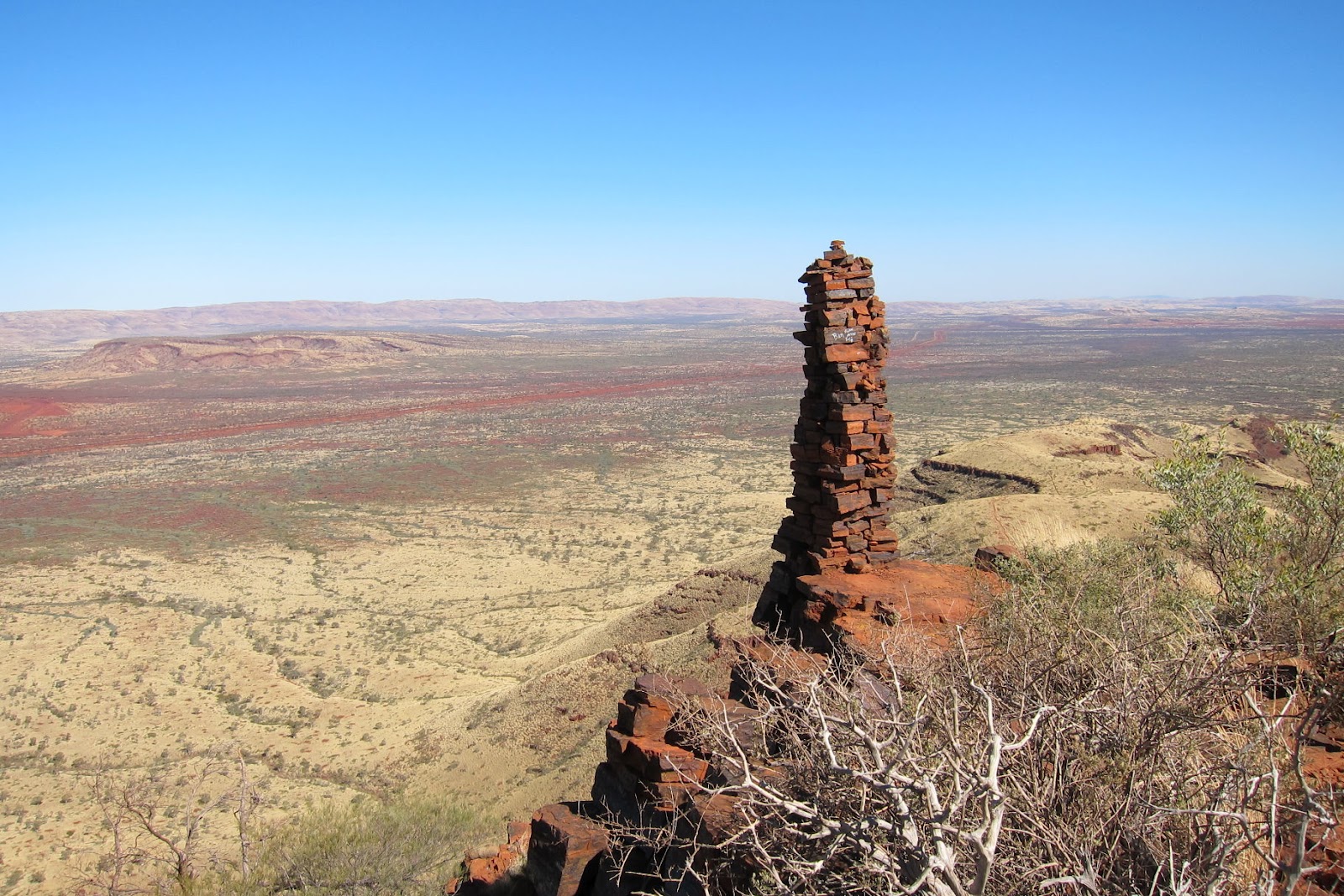 14.) Nice view looking back ... If you click on the pic to enlarge it, you can see the trail we walked along the ridge top. The hill called Chinaman's hat is at the top right hand corner.  A video of this scene is in http://www.youtube.com/watch?v=WadxNRkmJIs 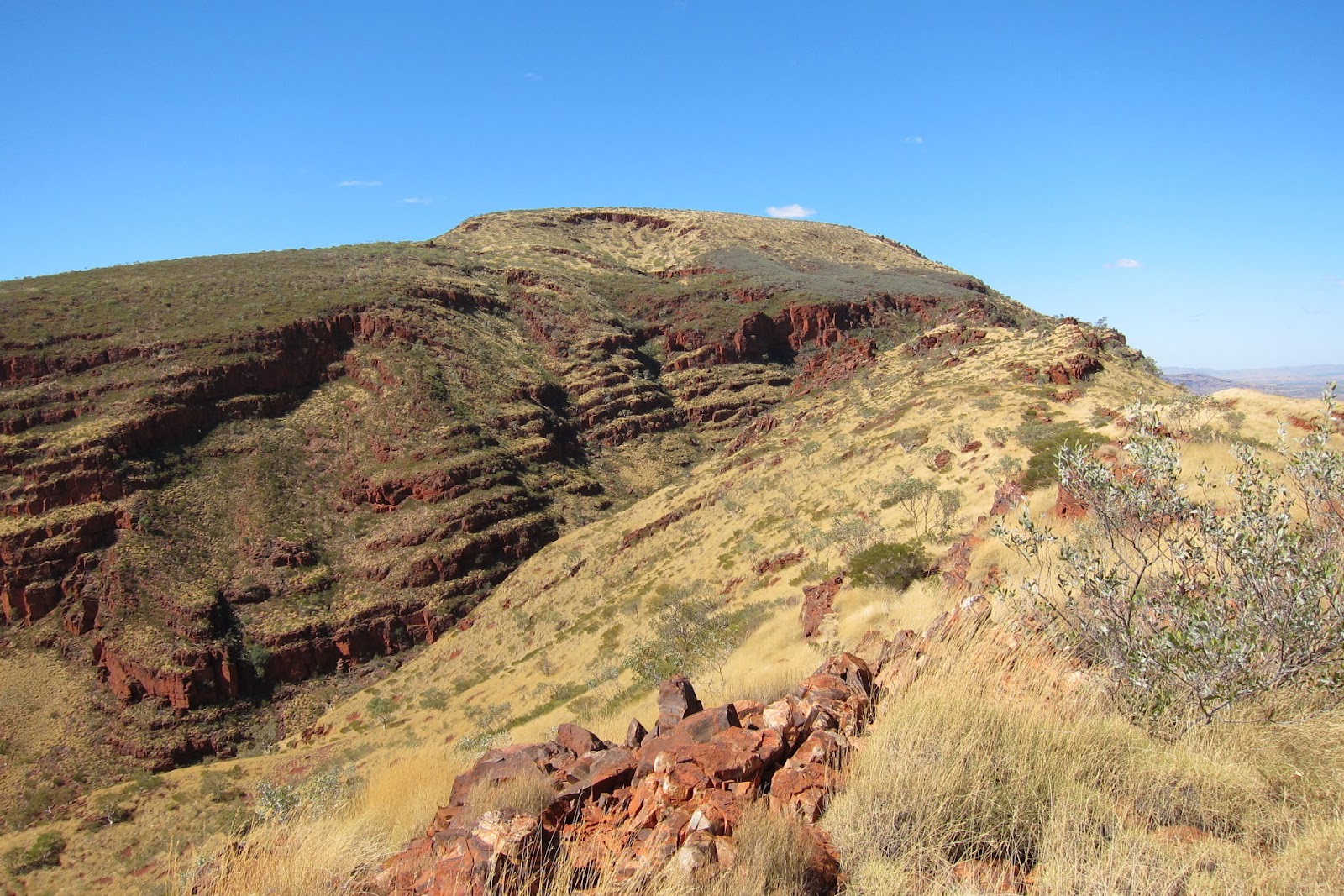 16.) I am pointing at a cairn marking the summit of Mt Bruce. 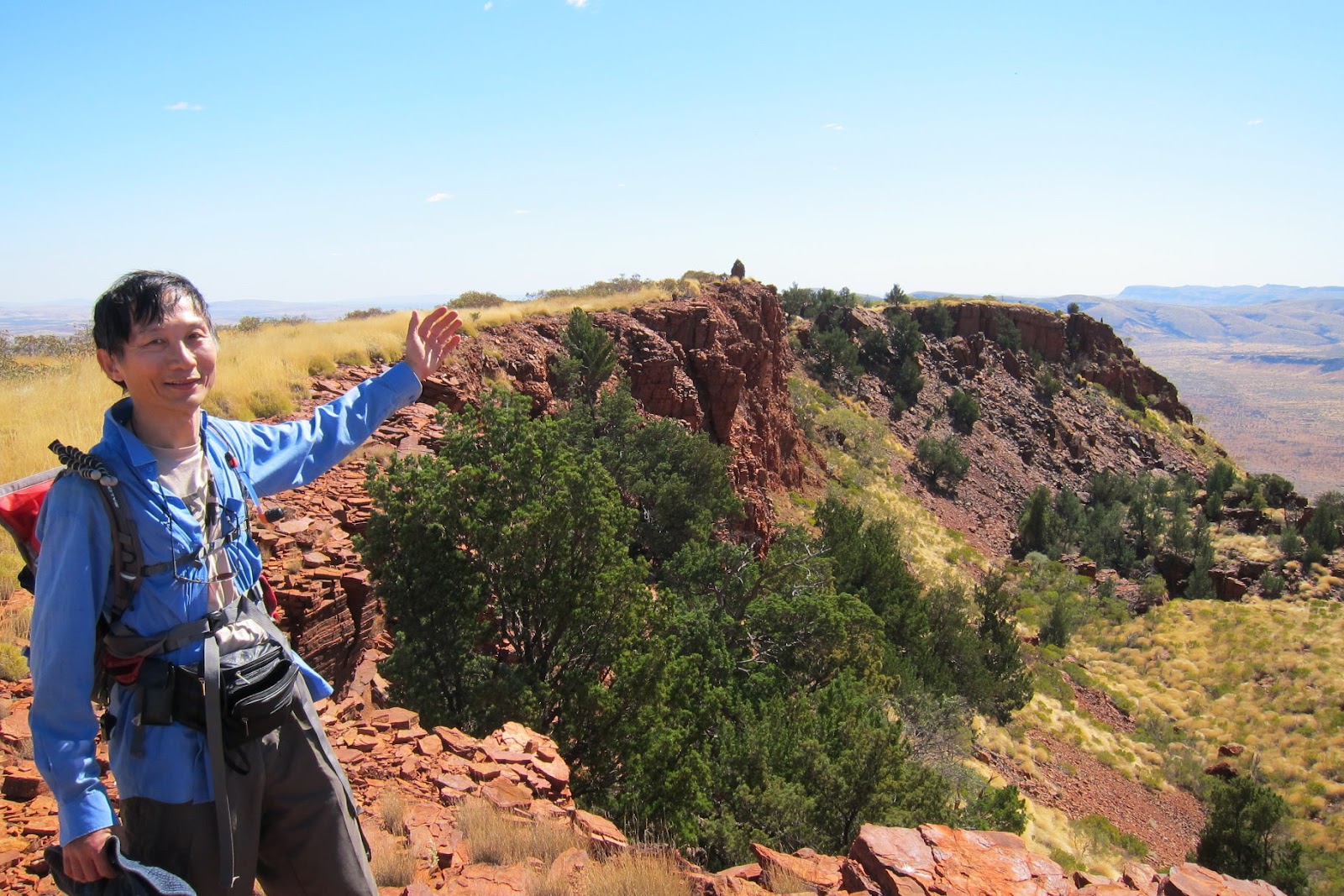 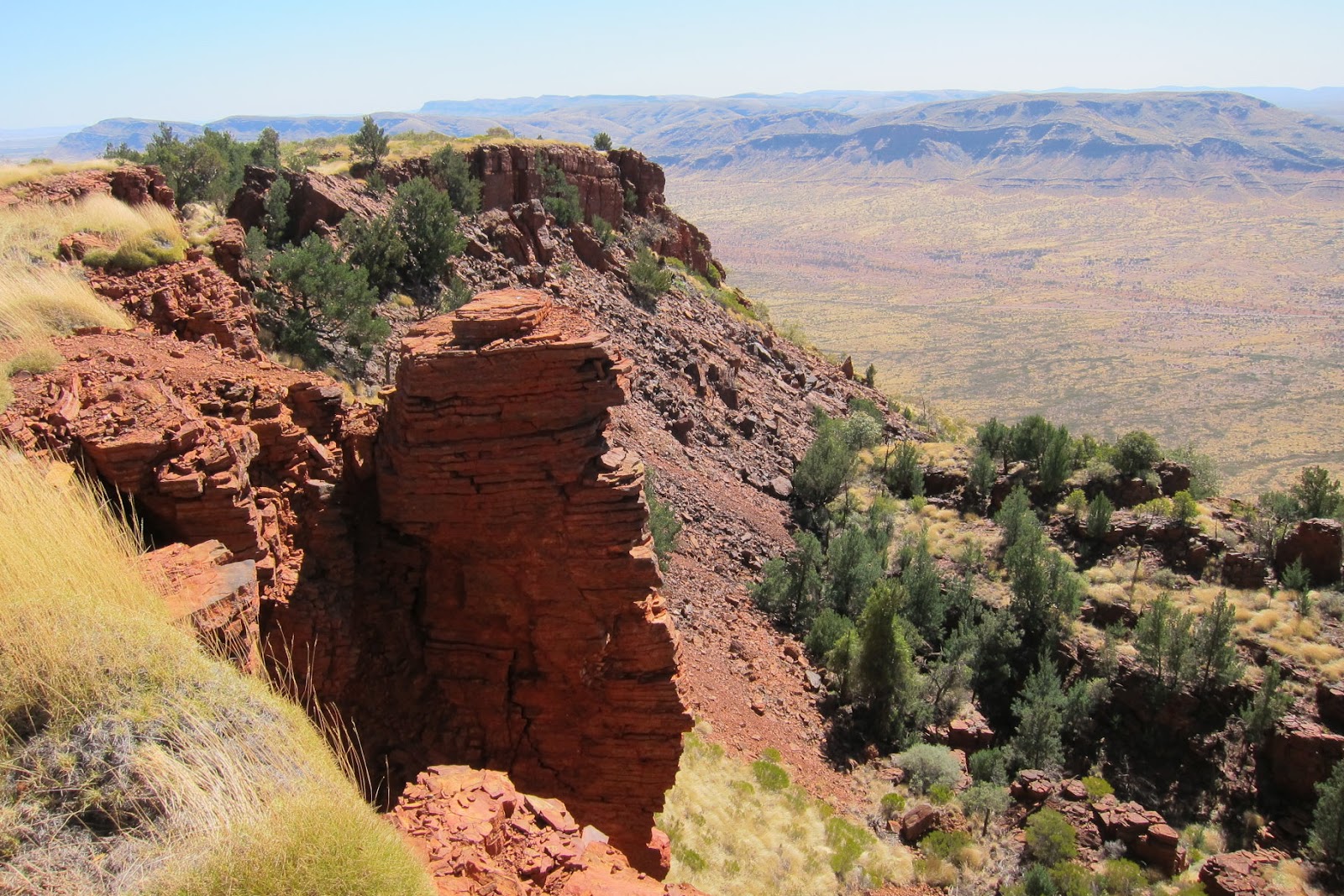 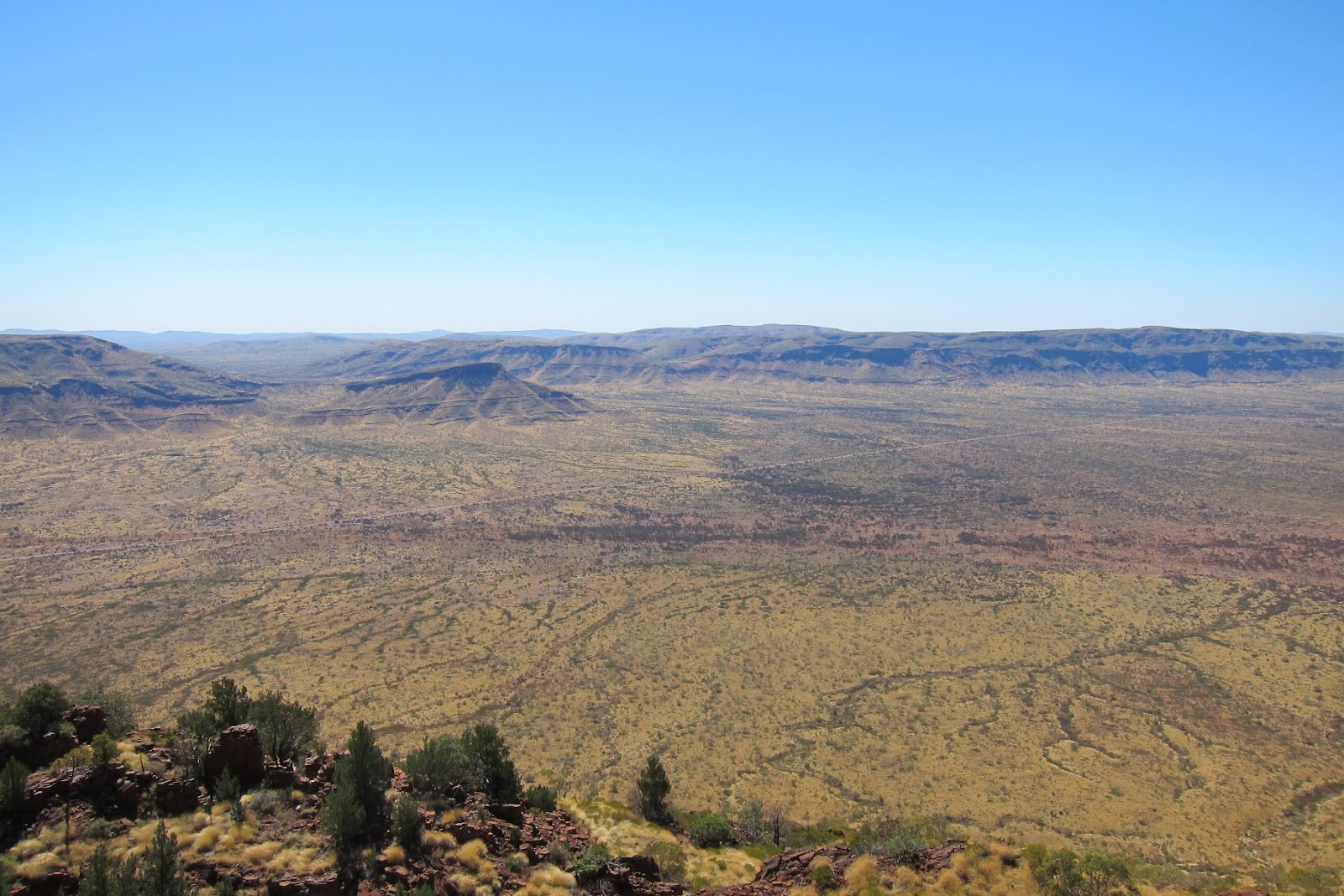 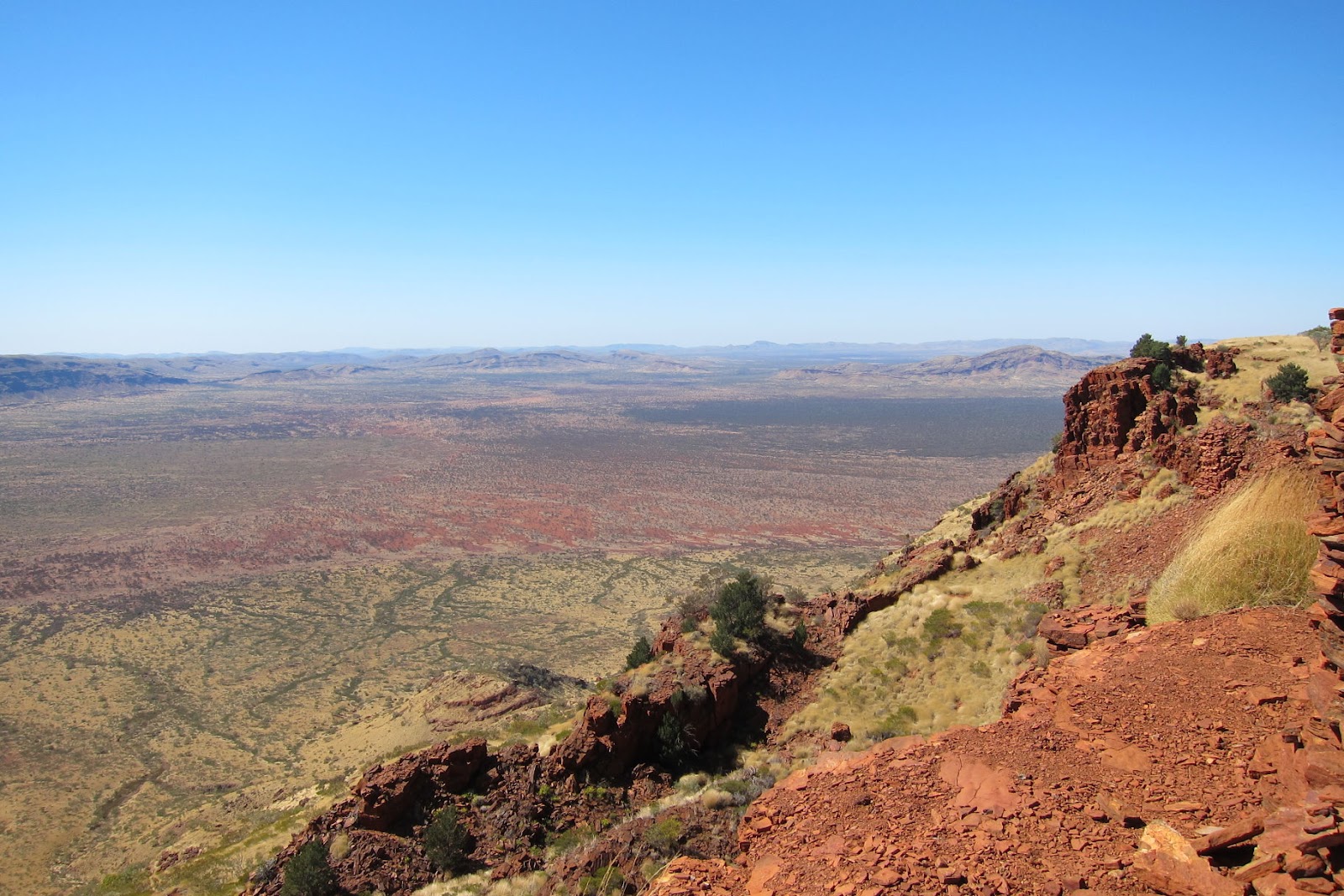 23, 24.) Towards the south is a clear view to the nearby Marandoo iron ore mine.  The iron is shipped to China to fuel its construction boom.  Just as well we have now climbed Mt Bruce.  Wait any longer and the entire mountain will be shipped to China. 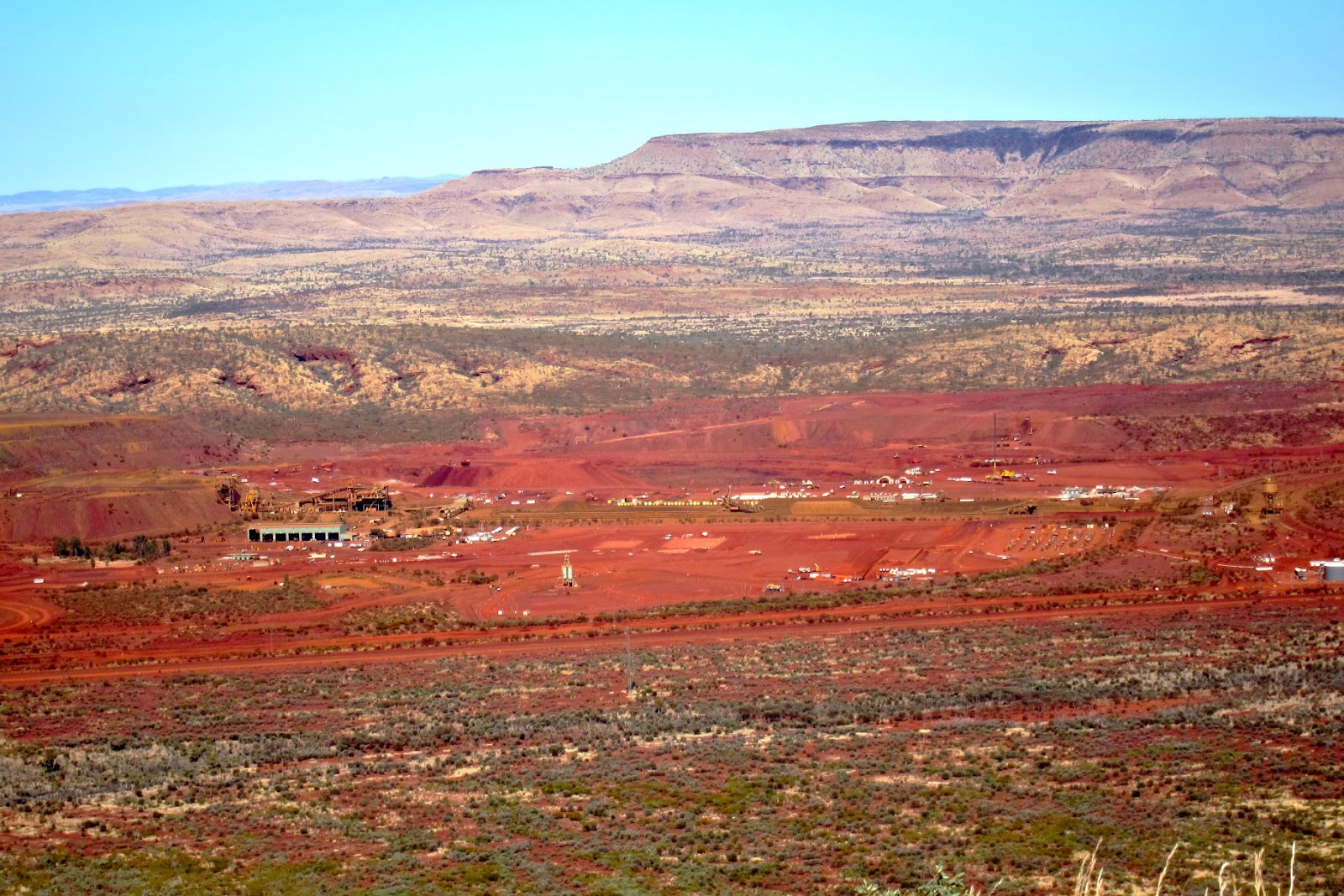 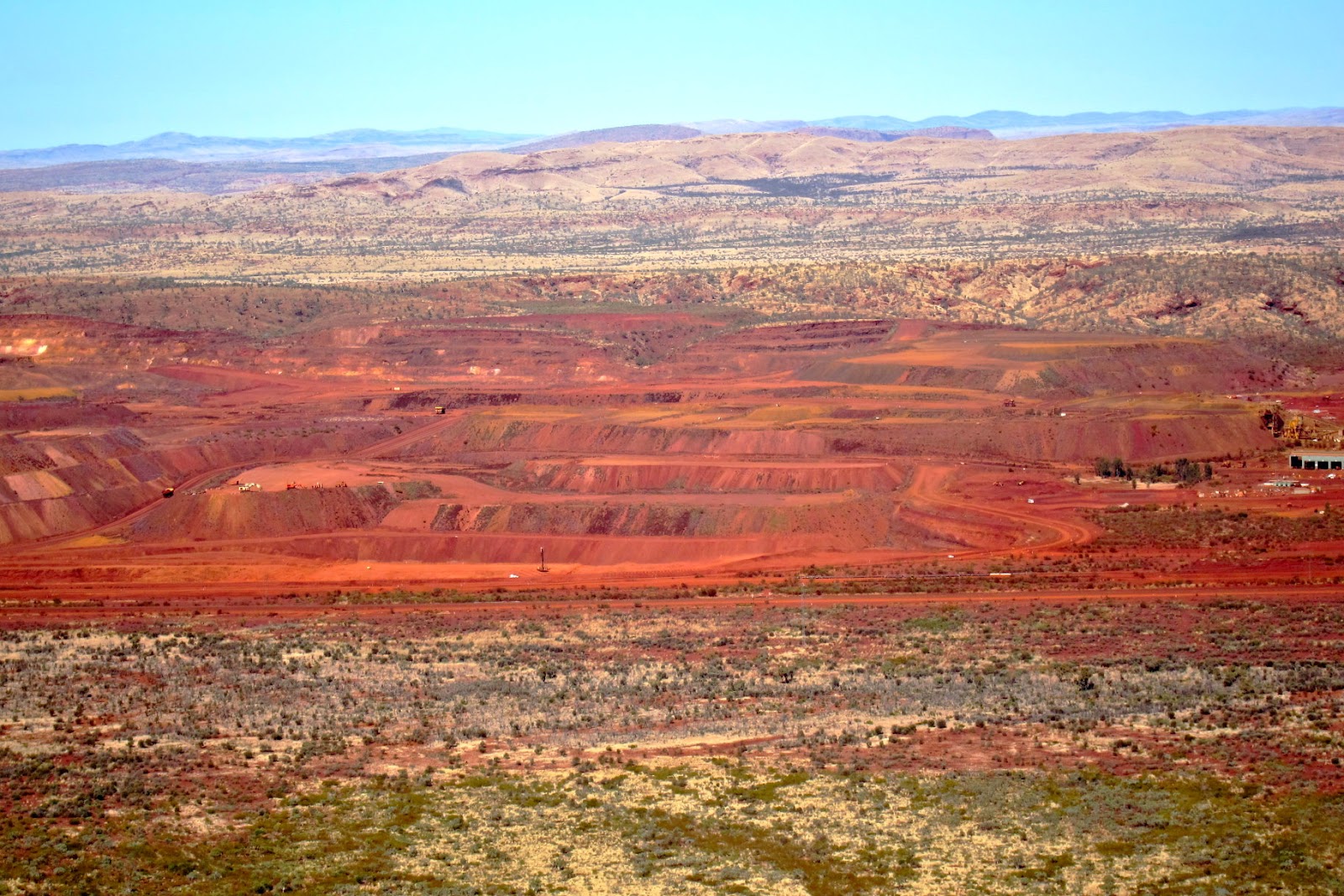 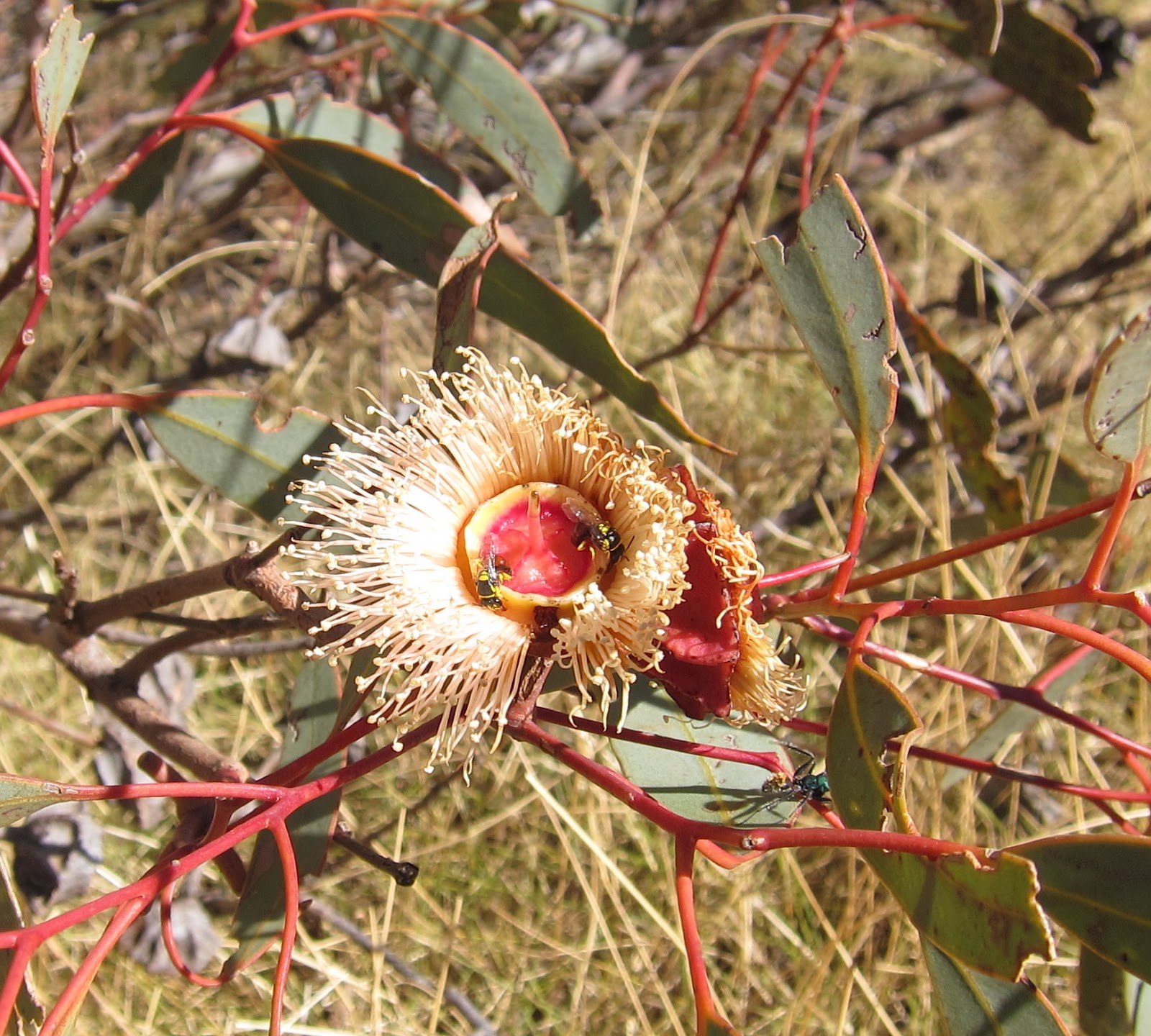 PS:
The next day, we climbed Mt Meharry (WA's highest mountain) in the same Karijini National Park.   A write up and photos of the climb are in my blog:
http://mntviews.blogspot.com/2012/08/meharry-wa-australia.html

Search This Blog ... but use index is better